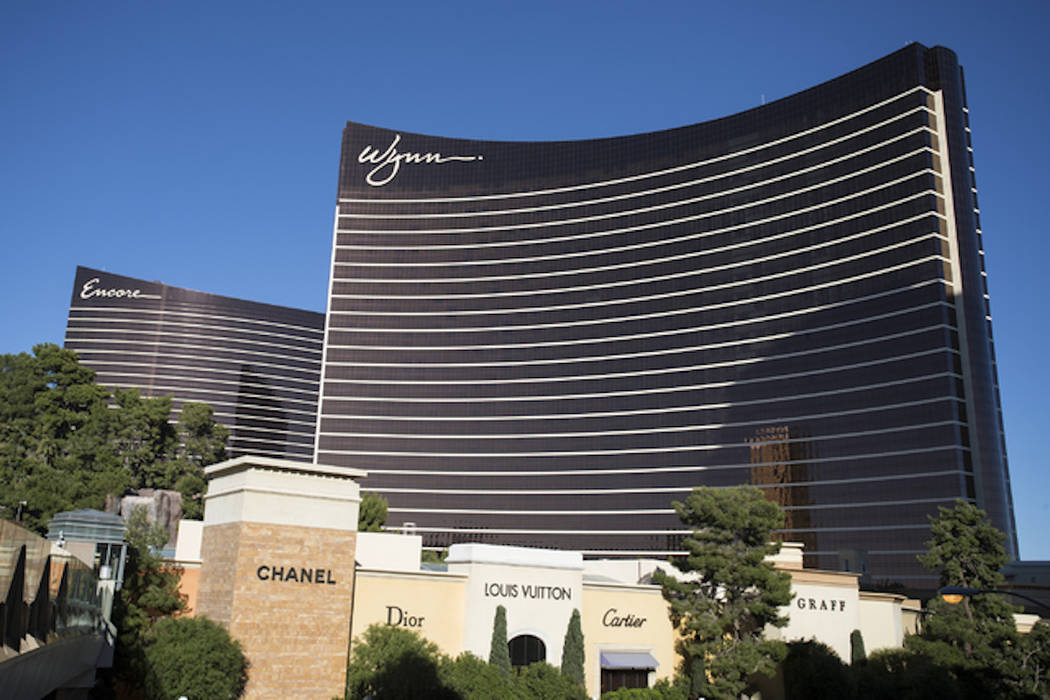 The Encore and Wynn hotel-casinos are shown on the Las Vegas Strip. (Loren Townsley/Las Vegas Review-Journal) 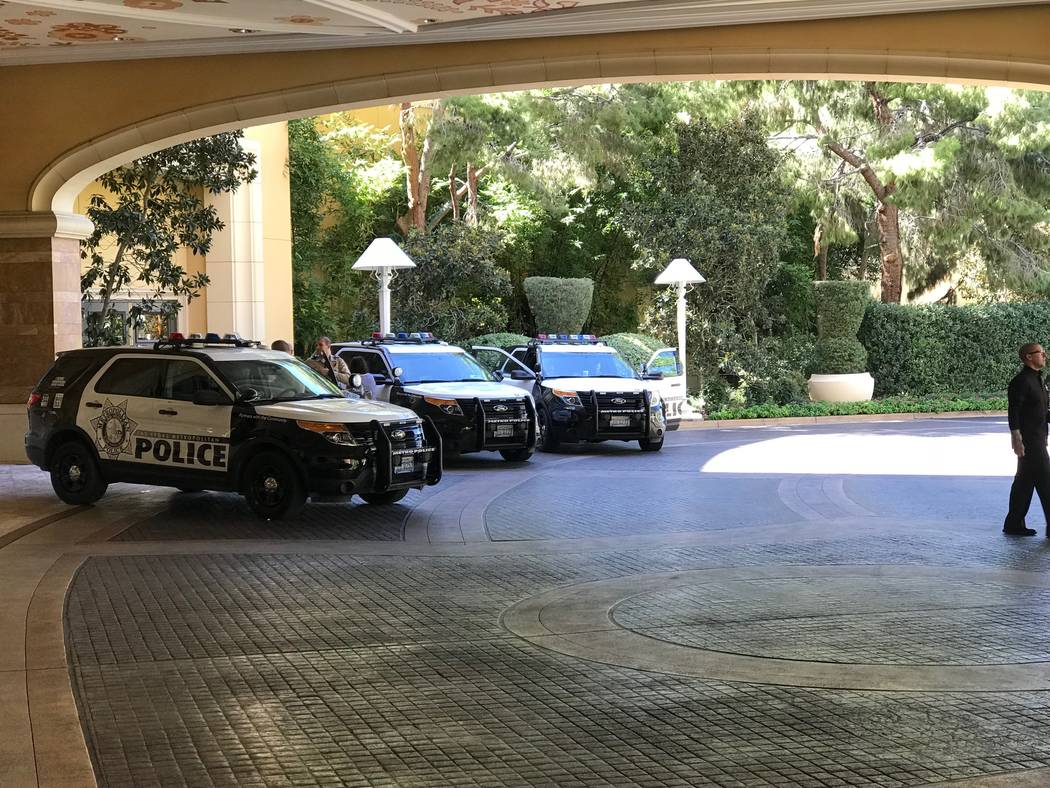 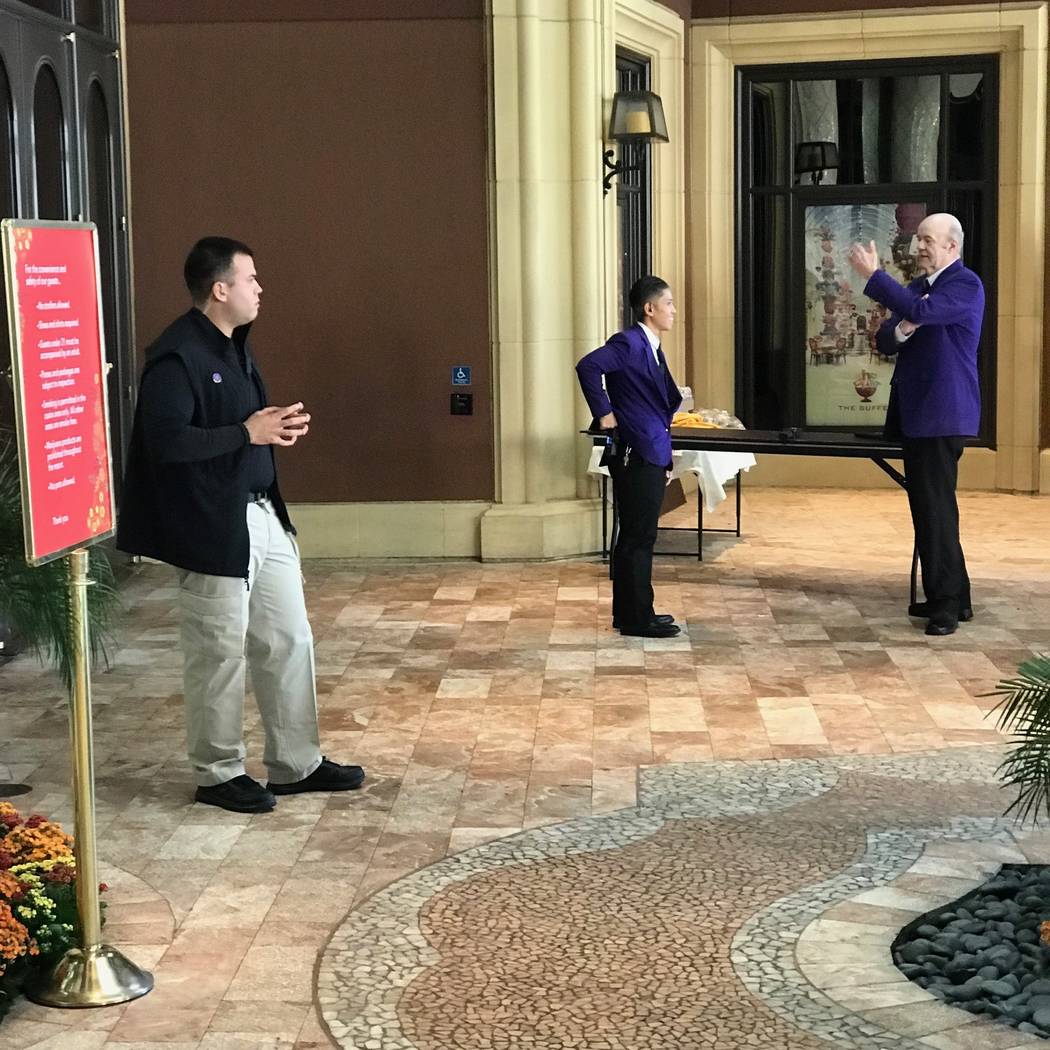 On Tuesday, two workers, sporting blue jackets and black pants, stood beside a table with metal detectors in their hands outside the Wynn Las Vegas entrance on Las Vegas Boulevard South.

Bloomberg News reported earlier that Wynn began checking bags, resulting in a 10-minute-long line to get into the luxury resort. Wynn reduced the intensity of the checks Tuesday, possibly indicating it was testing the new strategy.

A Wynn employee said guests that stepped outside Monday for a smoke or fresh air had to stand in line again to re-enter, something confirmed by a guest attending a convention.

The guest said both his bags were searched upon entry by guards wearing plastic gloves and holding metal detectors. The guest was searched again as he returned to the hotel in the early morning hours and forced to take his ventilator out of his pocket.

Seems Wynn #LasVegas still figuring out new strategy for scanning bags. Here the work table is taken down, then put back up. @reviewjournal pic.twitter.com/JdYTdeSK0i

However, guest feedback led to some corrections by Tuesday morning, when very few bags were checked by security.

“We initiated metal scanning at our entrances early Monday morning when it was uncertain if there were multiple shooters,” a Wynn spokesperson said. “Now that it is confirmed there was one shooter, we will return to scanning guests when we believe the need to arises. We are continuing our other enhanced security procedures and entrances and throughout the resort.”

Metal detectors may not be a good option for hotels because they can spoil the vacation experience guests desire, said Michael McCall, a professor of hospitality at Michigan State University, on Monday.

Simply having a greater security personnel presence can be an effective deterrent, he said. Thus, even if Wynn guards don’t often check bags, their presence can enhance security.

Three police cars were parked outside the entrance of Wynn as well as Encore on Tuesday afternoon. The police were not only there as a show of greater security but also to examine surveillance tapes, said a Wynn employee.

Police are trying to piece together shooter Stephen Paddock’s last few days before he unleashed a hail of bullets onto a country music crowd, killing at least 59. The tapes of Strip casinos can aid in putting together that story.

Police have also boosted their presence on Fremont Street, said retailers on the street. Three police cars were parked on the corner of South Third and Fremont streets.