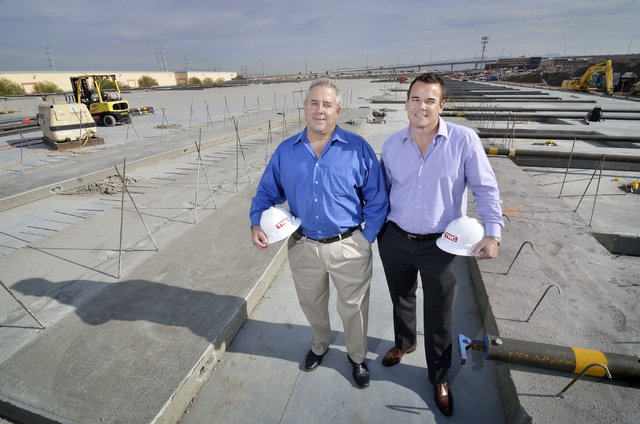 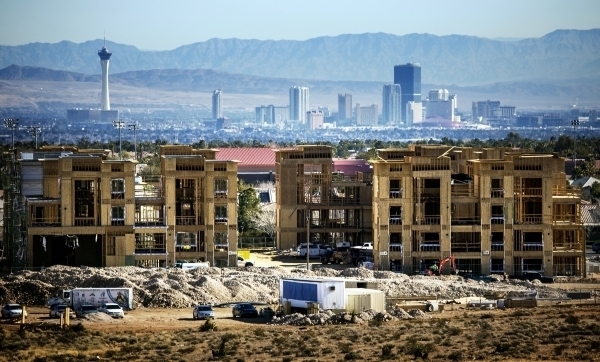 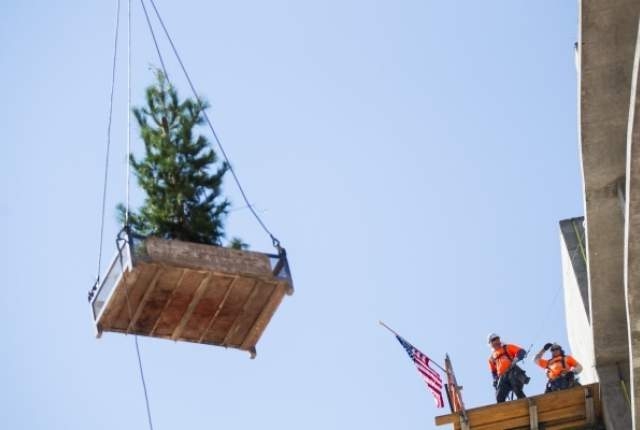 The ceremonial tree is raised during the topping off ceremony at the Lucky Dragon in Las Vegas on Friday, Sept. 11, 2015. (Chase Stevens/Las Vegas Review-Journal) Follow @csstevensphoto 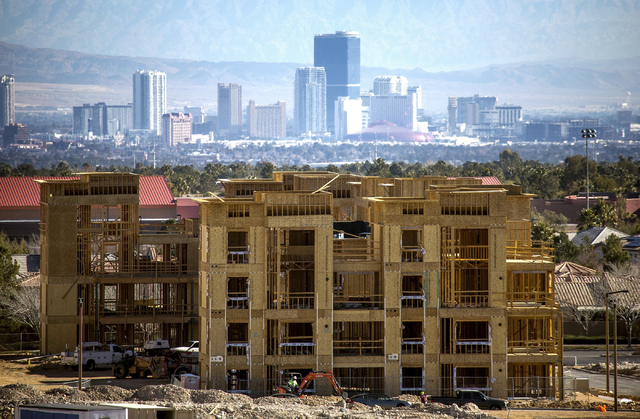 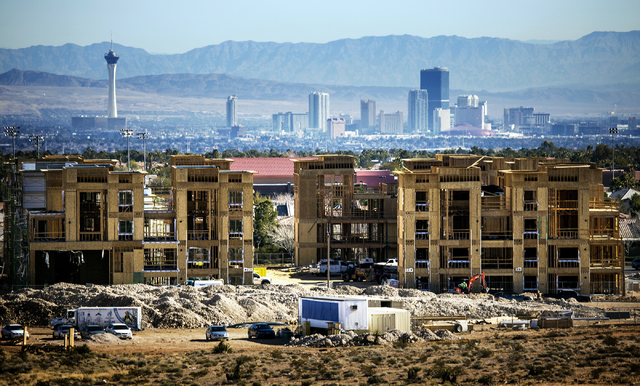 Construction on Eastern Avenue, from St. Rose Parkway to Silverado Ranch Boulevard, started in September. The project is expected to cost a little more than $1 million and is being funded through the fuel revenue index. (Caitlyn Belcher/View)

Right about now, you’re probably sighing: “Haven’t we been here before?”

Sure, today’s building boom shares echoes of the market’s frenetic pace before 2007, when the building bust hijacked the local economy and held it hostage for half a decade.

But this time, the activity is manageable. Those surging growth rates come mostly from the fact that construction came to a standstill in the recession. Population growth, job gains and record visitor volumes mean the building sector should continue to expand at its rate today through 2016, and likely into 2017, experts say.

“While they look nothing like they did at the height of the market in 2006, the fundamentals within the construction industry look much more stable at their current levels,” said Brian Gordon, a principal in local economics research firm Applied Analysis. “The off-the-chart growth rates of a decade ago were clearly unsustainable. Our construction industry is better-positioned today.”

A look at the numbers

Nowhere is Nevada’s construction bust more obvious than in its job numbers.

Those numbers have bounced back markedly in the last two years.

Mike Shohet, president of commercial construction trade group NAIOP Southern Nevada, said he sees the gains in his association’s membership rolls, which were up 10 percent year over year at the end of 2015 to more than 400.

Membership in the Nevada Contractors Association soared 25 percent from mid-2014 to the end of 2015, though it fell by nearly 40 percent in the downturn, added Sean Stewart, the group’s executive vice president.

“It’s definitely interesting times,” Stewart said. “When I speak with contractors and employees, there’s a lot of optimism. People are excited. They understand it’s a different growth pattern, and that it could potentially be very good for Nevada.”

That growth pattern has been broad, spreading to virtually every corner of the building industry.

The recovery began picking up speed in 2013, with a small revival in housing, and took flight in 2014 with an upsurge in industrial and retail construction. Thanks in part to a 2 percent population growth rate that’s running roughly three times the national average, new-home permits have doubled, from a 2011 low of 3,700 to today’s 7,500 annual closings, though that’s still a fraction of the 33,000 permits local builders pulled in 2004.

Where there’s population growth, there’s demand for new services. Enter the $1.2 billion, 155-acre Union Village near U.S. Highway 95 and Galleria Drive. The health care-centered project, under construction now, will include hospitals, retail, cultural centers and senior living when it’s complete in about a decade.

But few construction subsectors have surged like the industrial market.

TWC Construction saw the swing coming in October 2014. That’s when developer Prologis enlisted the Las Vegas builder to put up what was then the largest local speculative industrial space in a decade — the 464,000-square-foot Las Vegas Corporate Center No. 19 at Pecos and Gowan roads.

Many more industrial spec spaces would follow, driven in large part by a strong e-commerce market: Today, the market has nearly 6 million square feet of spec industrial space in the works, though some of that might not get built if leasing activity slows.

Still, “if half of what we see coming across our desk is built, it’s going to be a good market for all of us,” said TWC’s CEO, Matt Ryba.

Thanks to the boom, TWC’s business volume soared as much as 60 percent in 2014 and 2015, Ryba said. The contractor’s full-time employee base is up more than 35 percent, to around 30 people. Company executives anticipate revenue gains of another 20 percent to 25 percent in 2016, though the employee roster likely won’t grow that much.

That slower employment growth won’t be the case in general.

A spur to suburban retail

Job gains in construction should stay at their current levels at least through 2016, observers said.

“We see growth in all sectors,” said Stewart, forecasting another year of roughly 10 percent annual gains in the jobs base.

Gordon said that should include the residential side, where a passel of apartment projects including The Constellation in Summerlin and The Mercer at Tropicana Avenue and Grand Canyon Drive, will supplement steady demand for new single-family homes.

The new rooftops will spur additional suburban retail, particularly in underserved markets such as the southwest, Shohet said.

Plus, a new, local gasoline tax has fueled nearly $1 billion in revenue for public-works projects in Southern Nevada, such as the $559.4 million Project Neon, the 3.7-mile overhaul of the Spaghetti Bowl interchange between Interstate 15 and U.S. Highway 95.

What’s more, two planned megaresorts — Resorts World Las Vegas and Alon — won’t reach peak construction until they’re close to the middle of their building timeline, Gordon said. If both projects pick up on schedule in 2017 and 2018, that could mean sustained labor demand beyond this year. Construction’s current growth rate is sustainable for the next two years if all projects in planning move forward, he added.

But that could mean labor shortages.

“It’s been an employer’s market for us. There’s a lot of good talent looking to get back into the game,” Wilmer said.

Others are struggling, though. It’s tough to find qualified workers in some trades, particularly carpenters, drywallers, electricians and, in the resort sector, millwork and upholstery, Shohet said.

And even with today’s bumper crop of jobs, the city’s construction jobs market will likely never return to its peak.

“We know that level of growth and expansion can have negative repercussions when economic conditions slow down, and that type of unsustainable pace of growth probably isn’t something the community should be striving for,” Gordon said.

Added Shohet: “It was a little bit irrational at that time. A lot of projects got built that probably shouldn’t have been built.”