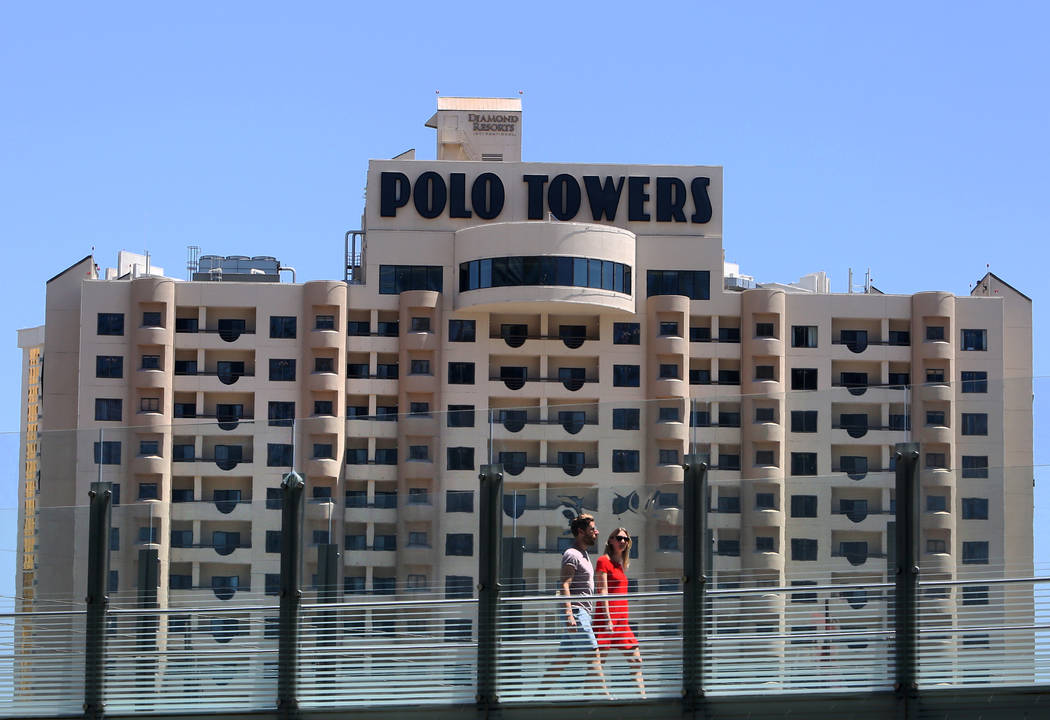 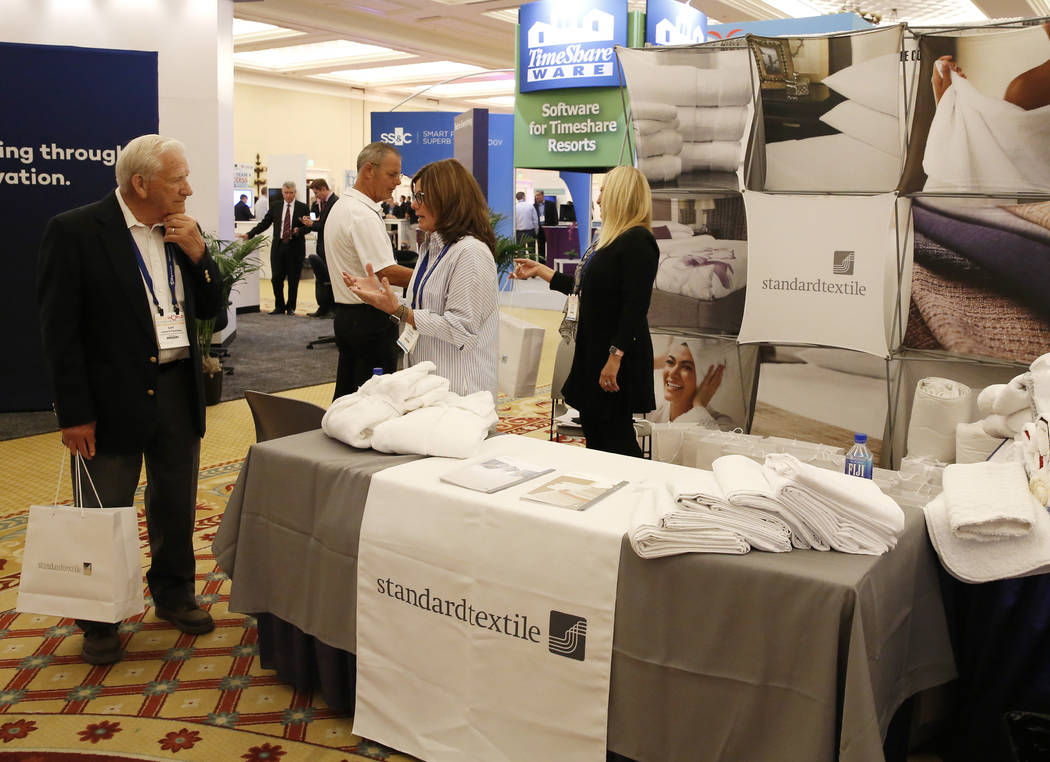 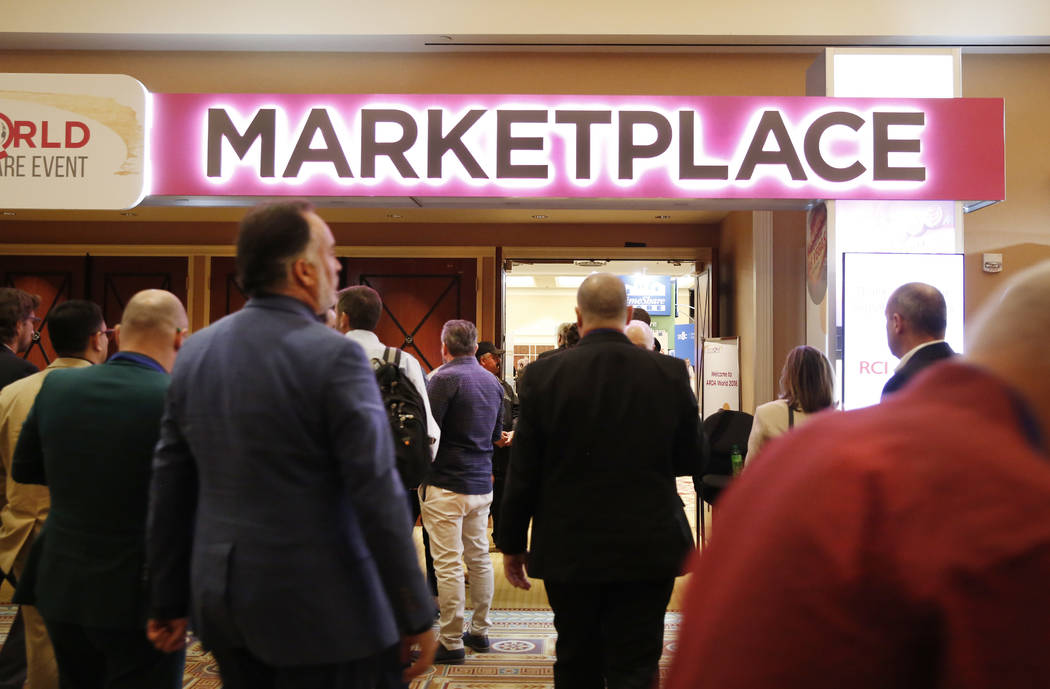 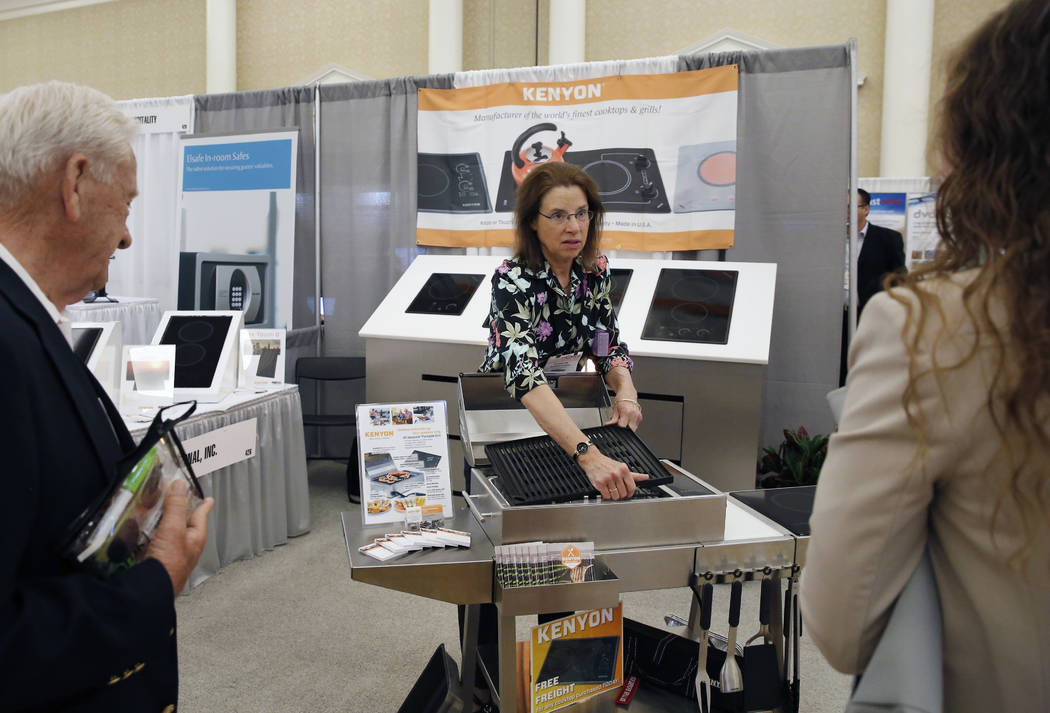 Suzanne Owens, vice president sales of KENYON, demonstrates how to grill on all season portable grill during the annual convention from the American Resort Development Association at Caesars Palace hotel-casino on Wednesday, May 9, 2018, in Las Vegas. Bizuayehu Tesfaye/Las Vegas Review-Journal @bizutesfaye

And for the CEO of Las Vegas-based timeshare company Diamond Resorts, that maturity — in the form of more analysts on Wall Street and more attention from regulators — has meant big money.

The company landed contract sales in 2017 worth $850 million and about $455 million in earnings before interest, taxes, depreciation, and amortization.

“We’ve grown up,” Flaskey told a crowd at Caesars Palace.

Flaskey was one of about 2,850 people in attendance for the annual American Resort Development Association convention and expo, which ended Thursday.

He spoke on a panel of CEOs for timeshare companies about challenges to their industry, like scams, and changes happening within it.

Businesses like Airbnb, an app that connects users with people renting out space in their houses, have caused headaches for the hospitality industry, neighborhoods and regulators.

Airbnb previously said Las Vegas was among the top 10 cities in the U.S. for highest Airbnb guest arrivals in 2017, with about 500,000 visitors staying at homes or private apartments offered on the website.

“Grandma’s not going to get you towels,” Holiday Inn Club Vacations CEO Tom Nelson said. “We win in that game.”

The Desert Club Resort near the intersection of Koval Lane and Flamingo Road is part of Holiday Inn Club Vacations.

The industry is changing its offerings to bring in younger customers, rather than retirees who buy into timeshares. New offerings include on-site activities for children and shorter contract terms, like ones for seven or even three years, Welk Resorts CEO Jon Fredricks said.

“We’re trying to innovate and create experiences that are quite unique,” Fredricks said.

Welk Resorts has no local locations.

Regulators and timeshare company owners have partnered to educate people on scams that offer to get people out of their timeshare contracts but ask for money upfront and provide no service, the panelists said.

The state saw a 35 percent increase in the number of registered timeshare representatives.

Nevada registered 2,490 representatives in fiscal year 2017, according to state data.

Diamond Resorts has 403 destinations worldwide — over 100 of those Diamond-managed or branded resorts — and about 8,000 employees, Flaskey told the crowd of more than 100 at Caesars Palace on Tuesday.

Diamond went public in July 2013 at $14 a share, below the expected price. Apollo Global Management bought the company in June 2016 for $2.2 billion and returned it to a privately owned company.

Flaskey became CEO in March 2017. He told the Business Press around that time that Nevada was the company’s largest sales region in the world, that more than 500,000 families own with Diamond and that the aggregate average demographic is 55- to 75-year-old couples.

Flaskey said he predicts a strong 2018 and 2019 for the industry, with the 2020 election cycle something to keep an eye on. The industry has more room to grow with only about 7 percent of eligible people owning a timeshare.

“We’ve got some wind at our backs,” he said.