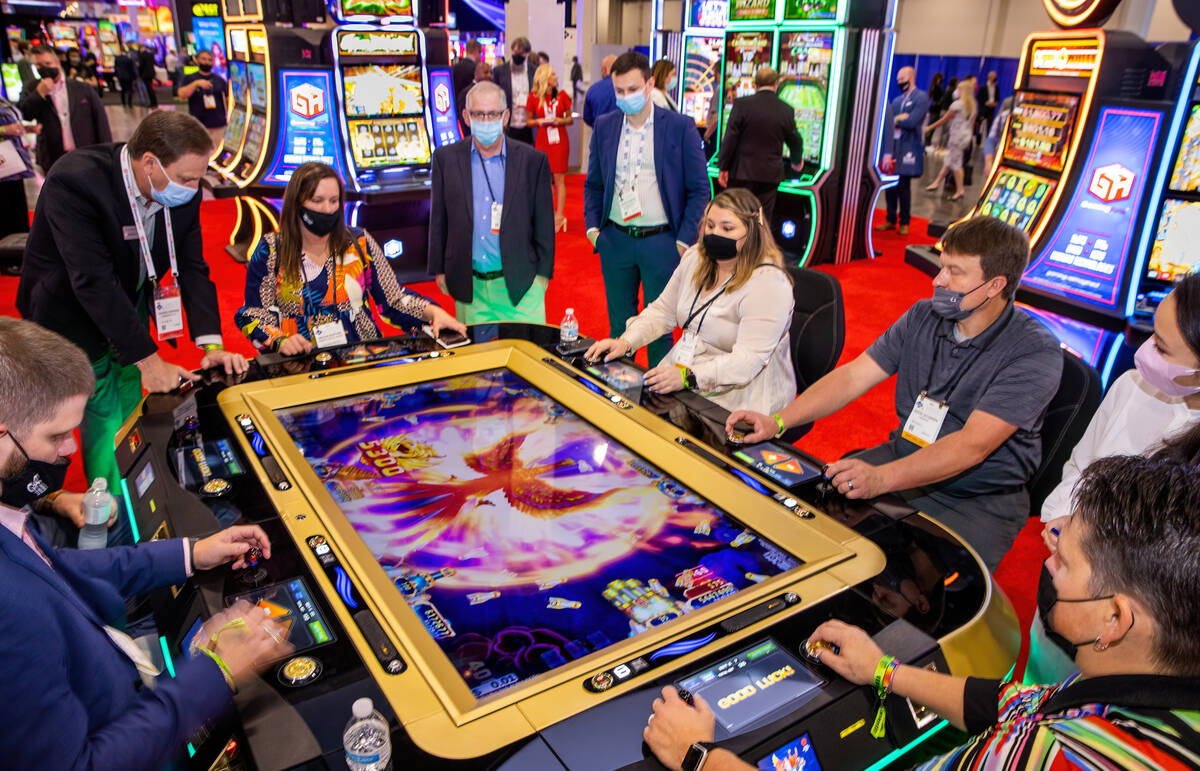 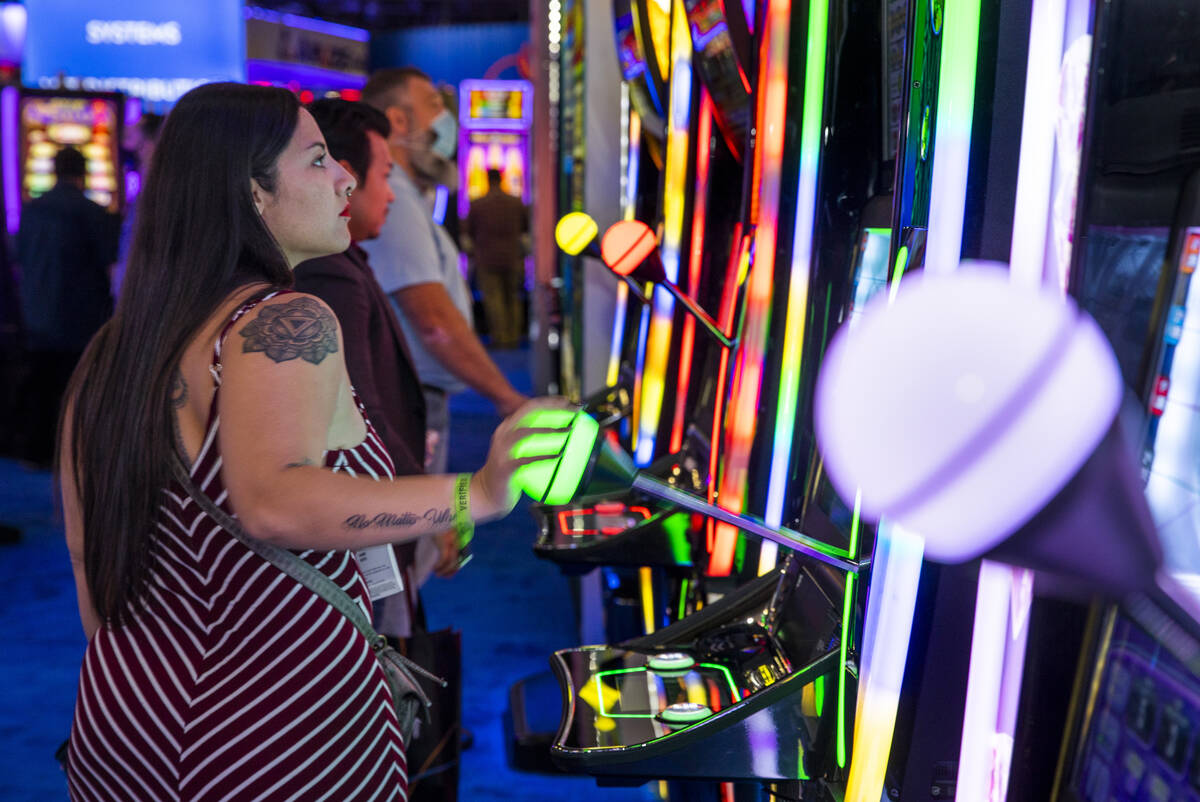 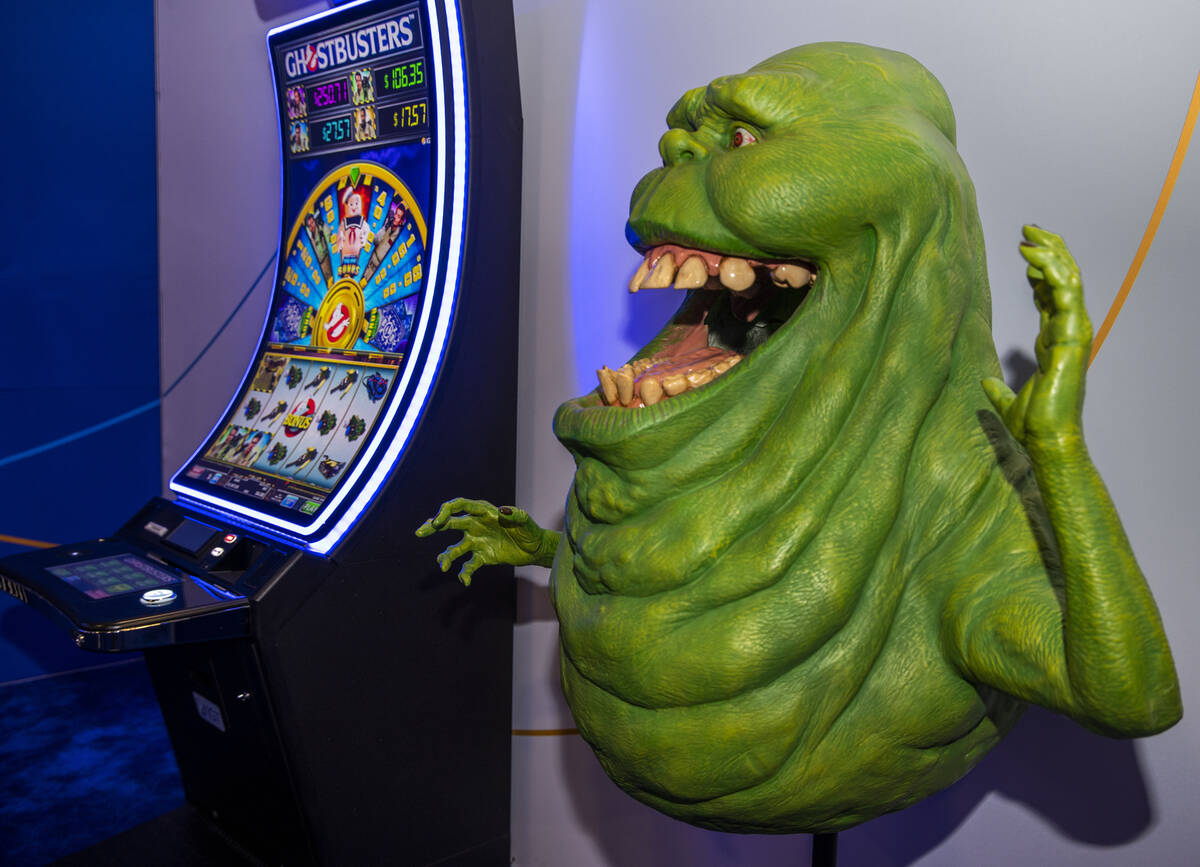 Slimer from Ghostbusters joins the related slot game in the IGT gaming space during day 3 at the Global Gaming Expo 2021 conference in The Venetian Expo on Wednesday, Oct. 6, 2021, in Las Vegas. (L.E. Baskow/Las Vegas Review-Journal) @Left_Eye_Images 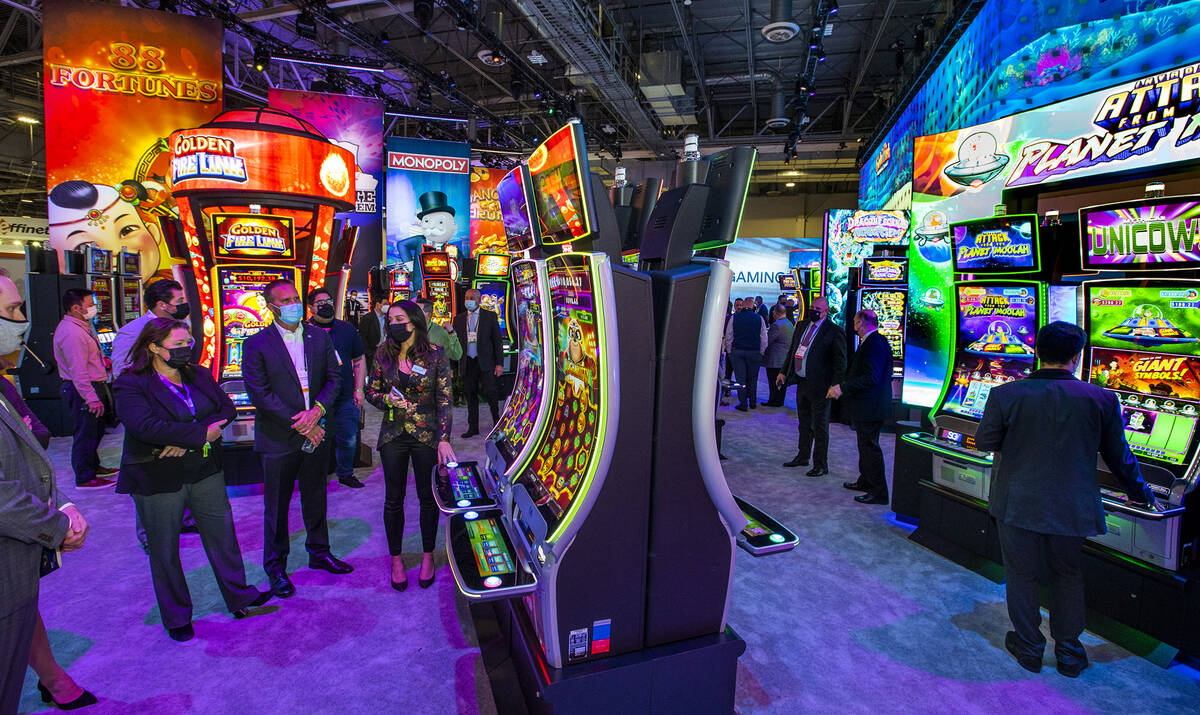 Attendees learn about the newest slot within the Scientific Games Corp. display area during day 3 at the Global Gaming Expo 2021 conference in The Venetian Expo on Wednesday, Oct. 6, 2021, in Las Vegas. (L.E. Baskow/Las Vegas Review-Journal) @Left_Eye_Images 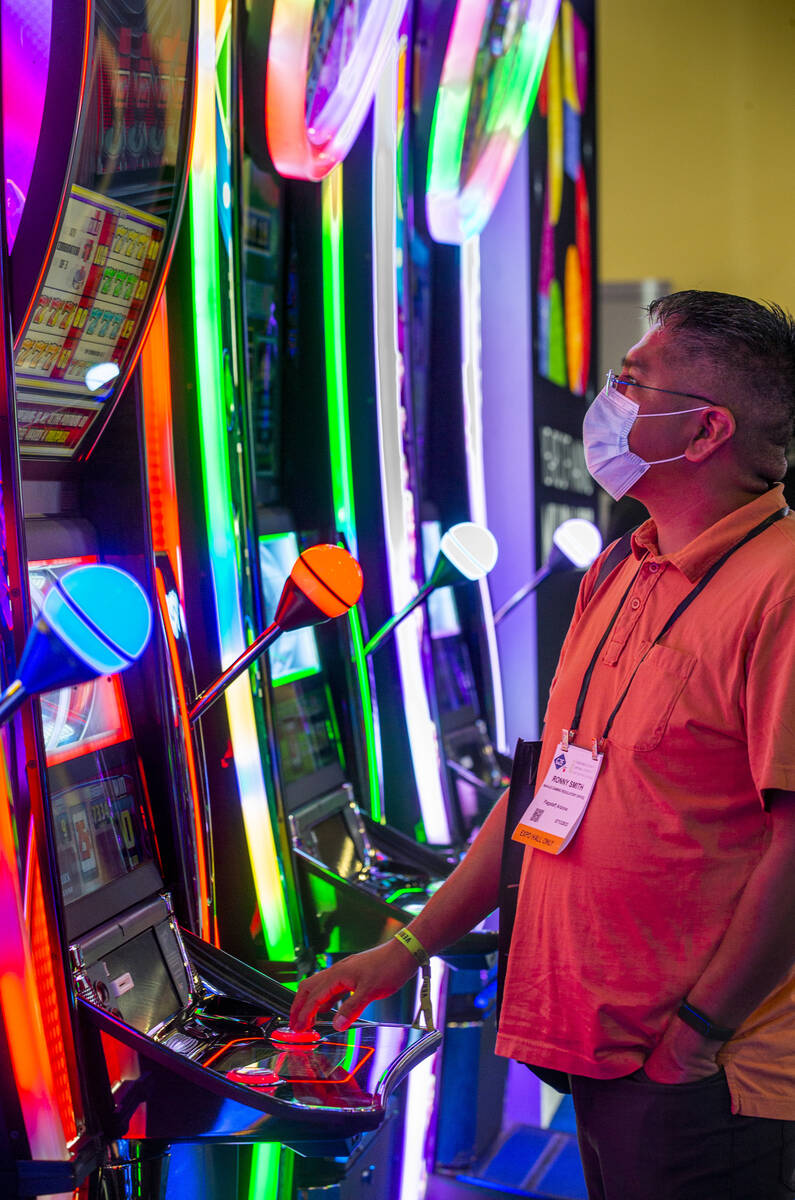 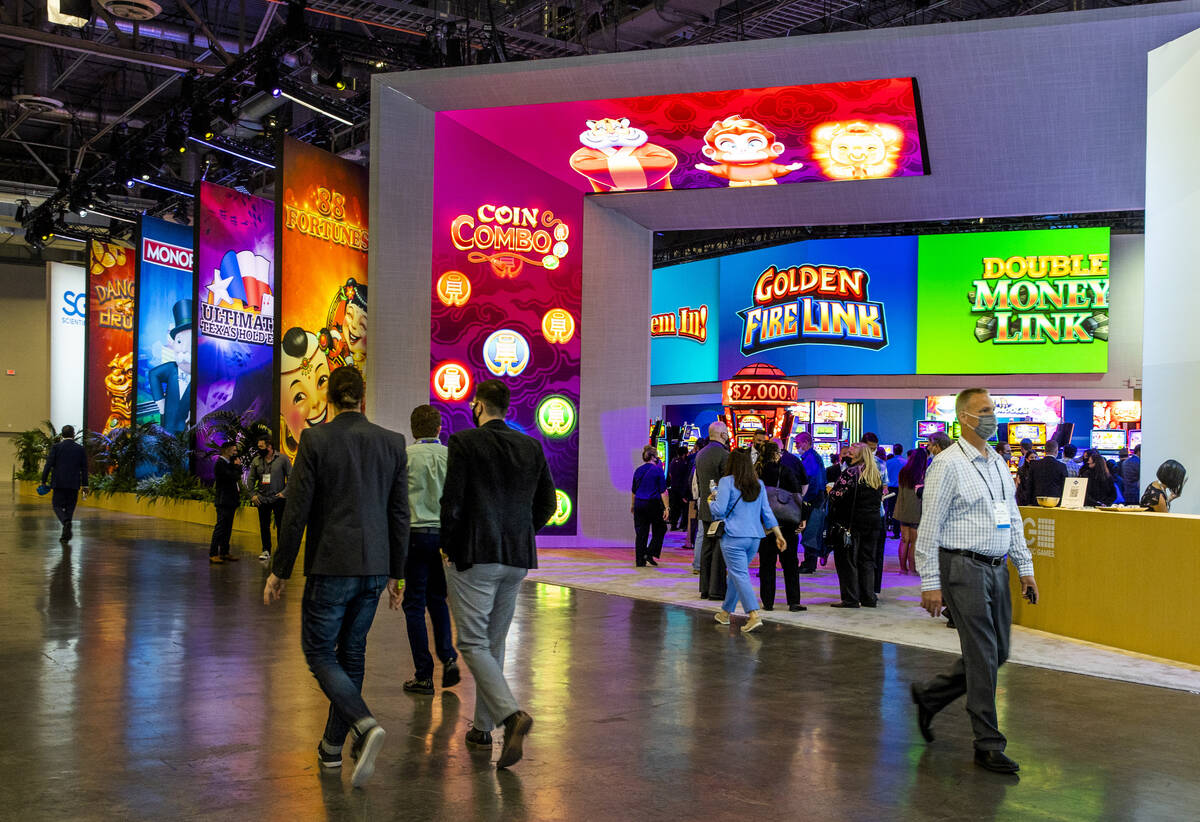 The latest and greatest offerings in slot machines were on full display this week as gaming manufacturers gathered in Las Vegas for the industry’s largest trade show.

“This is not new, but you see it happening more and more. They look to video games, social games and games that we play on our phones. That’s all about achieving and getting the next level,” said Josh Swissman, founding partner of the Las Vegas-based gaming and hospitality consulting firm The Strategy Organization.

It’s all about offering the gamblers the most immersive and entertaining experiences possible as companies are hoping to tap into what motivates people to stay engaged and spend more money, Swissman said.

With screens that are bigger and brighter than ever, a growing list of achievements to unlock and even colorful cartoon characters telling you how much you’ve won, the continued gamification of slots was evident at this year’s Global Gaming Expo held inside the Venetian Expo.

Megabucks is getting bigger — literally.

IGT unveiled its new Peak65 cabinet at this week’s show that, as the name suggests, features a 65-inch progressively curved display. The company showed its new massive cabinet with two of its most iconic games — Megabucks and Wheel of Fortune — on display.

But that wasn’t even the biggest screen on this year’s show floor.

Aristocrat Gaming showed off its brand-new Neptune Canopy that features not only multiple dual curved displays, but an overhead canopy screen that connects with other slot cabinets.

“The next step in gaming is really to be on the cutting edge of entertainment,” said Jon Hanlin, senior vice president of commercial strategy and business analytics for Aristocrat.

The gaming machines keep changing, but the classic franchises that have dominated the space for decades aren’t going anywhere.

For gaming companies, putting their iconic franchises onto their newest cabinets isn’t just about trying to get the most eyeballs on it. That brand familiarity allows companies to offer new cabinets or even slightly new mechanics without overwhelming the customer.

Phil O’Shaughnessy, vice president of global communications for IGT, said that’s why there’s been more than 300 different iterations of the famous Wheel of Fortune slot over the franchise’s 25 years in operation.

“When you put the world’s most iconic licensed theme onto your latest introduction, it’s a winning combination every time,” O’Shaughnessy said.

Companies such as Scientific Games have taken similar approaches, with that manufacturer putting iconic brands like Willy Wonka, Monopoly and Wizard of Oz onto brand-new cabinets like the Kaskada Jewel.

“It’s not necessarily about these new and wild frontiers that other suppliers are looking at. It’s how do we leverage those incredible franchises that we have,” said Matt Wilson, CEO of the gaming division for Scientific Games.

And that was by design.

Companies such as Everi with its “Player Classic Signature,” Scientific Games’ “Blazing 7s,” and IGT’s Diamond RS all had brand-new mechanical reel slots on display.

The retro-style slots give those older, but still popular cabinets a new life by bringing them into the digital age, including the addition of digital displays and the integration of cashless gaming compatibility.

Bradley Rose, senior vice president of game development for Everi, said it was about making very small modifications, “kept true to what the player loves.”

“Don’t change what’s working, but make it better,” he said.

The Review-Journal is owned by the family of Dr. Miriam Adelson, the majority shareholder of Las Vegas Sands Corp., which operates Venetian Expo.