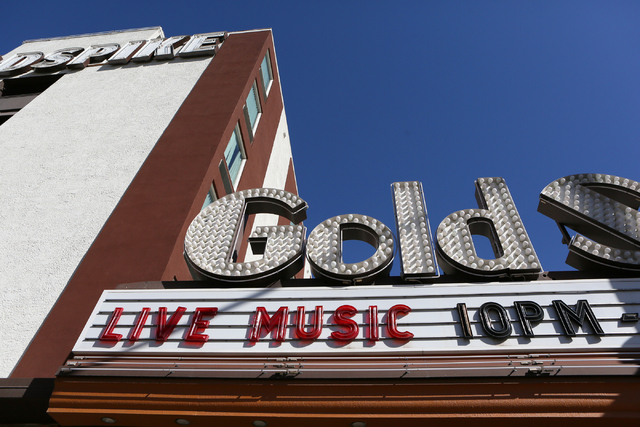 Signage is shown at Gold Spike Tuesday, March 22, 2016, in Las Vegas. Gold Spike, with new design and ownership by Downtown Project, will celebrate its third year this May. Ronda Churchill/Las Vegas Review-Journal 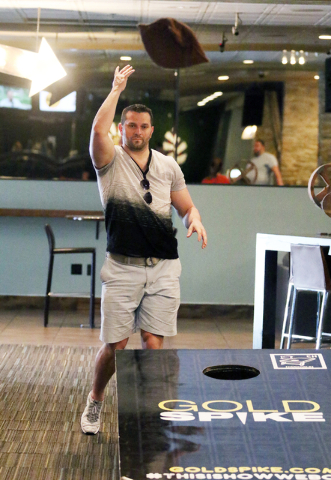 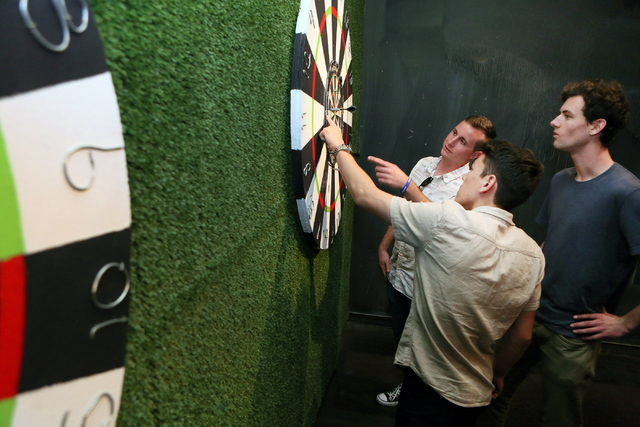 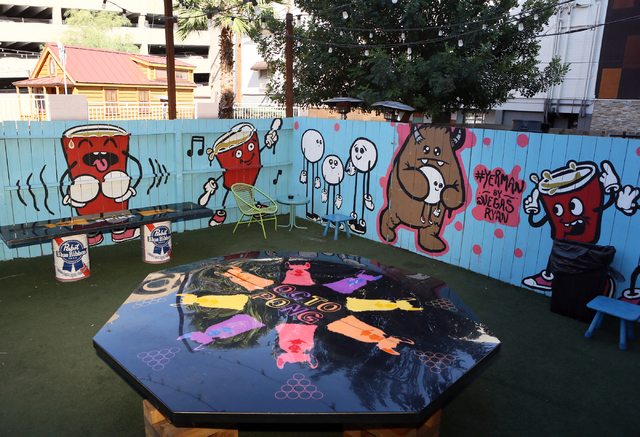 A playing area for beer pong is shown at Gold Spike Tuesday, March 22, 2016, in Las Vegas. Gold Spike, with new design and ownership by Downtown Project, will celebrate its third year this May. Ronda Churchill/Las Vegas Review-Journal 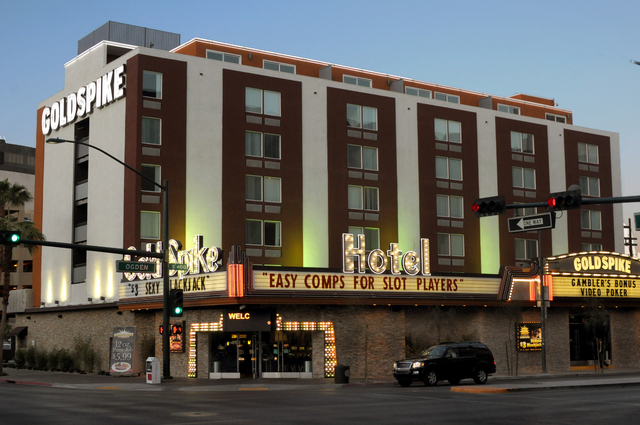 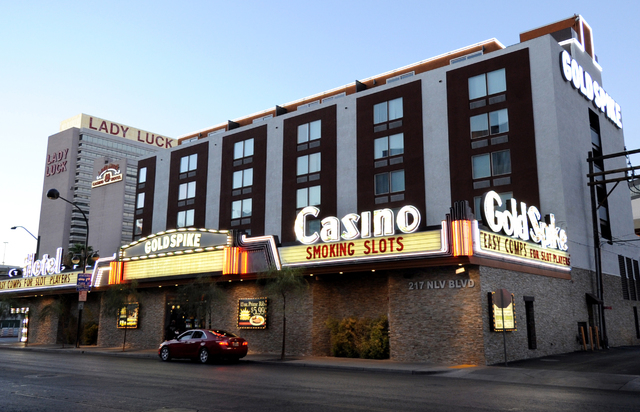 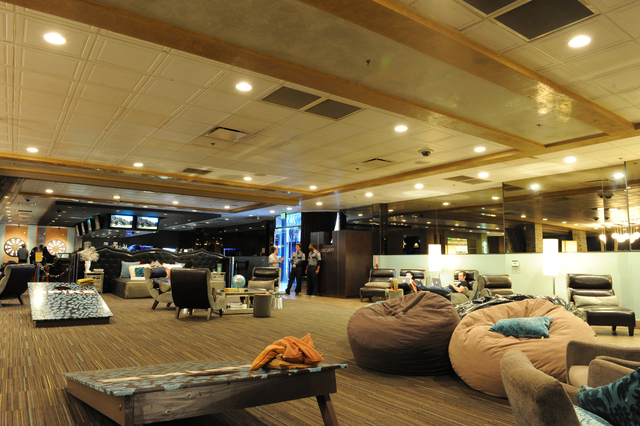 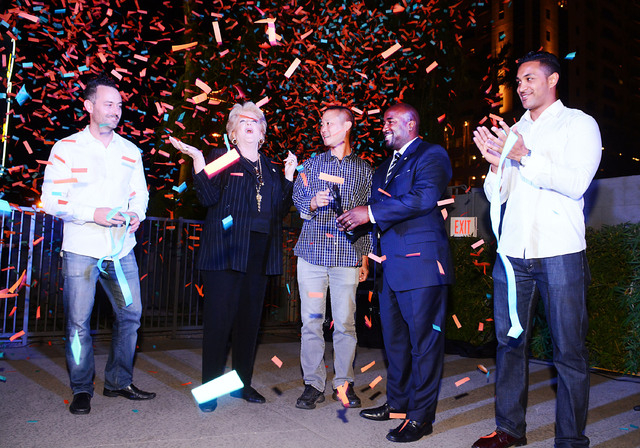 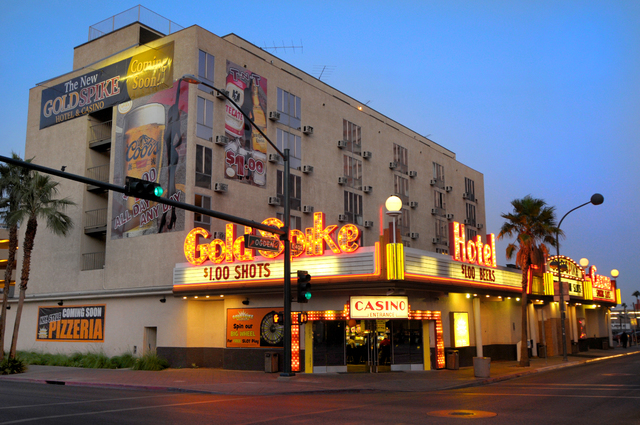 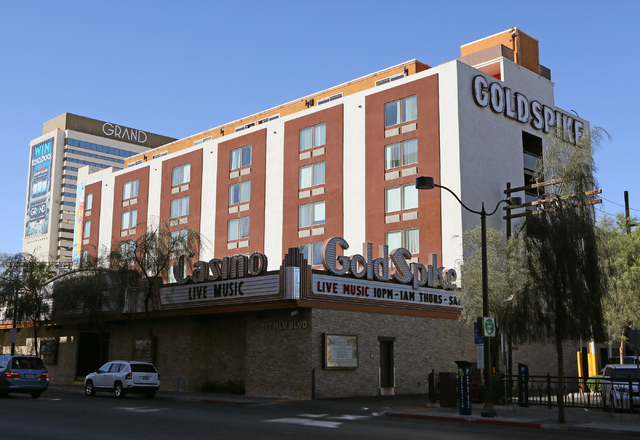 Gold Spike is shown Tuesday, March 22, 2016, in Las Vegas. Gold Spike, with new design and ownership by Downtown Project, will celebrate its third year this May. Ronda Churchill/Las Vegas Review-Journal 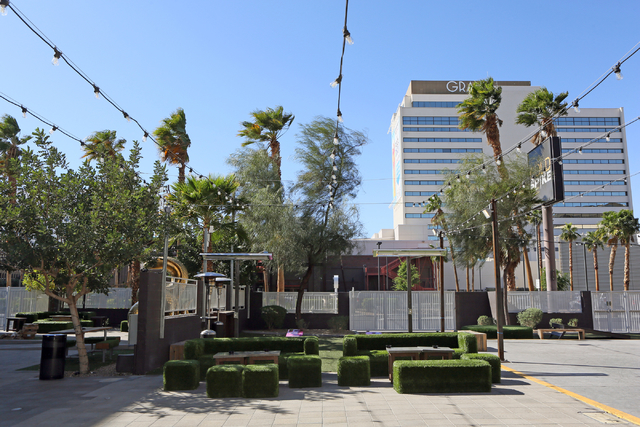 A back patio with lounge space and games is shown at Gold Spike Tuesday, March 22, 2016, in Las Vegas. Gold Spike, with new design and ownership by Downtown Project, will celebrate its third year this May. Ronda Churchill/Las Vegas Review-Journal 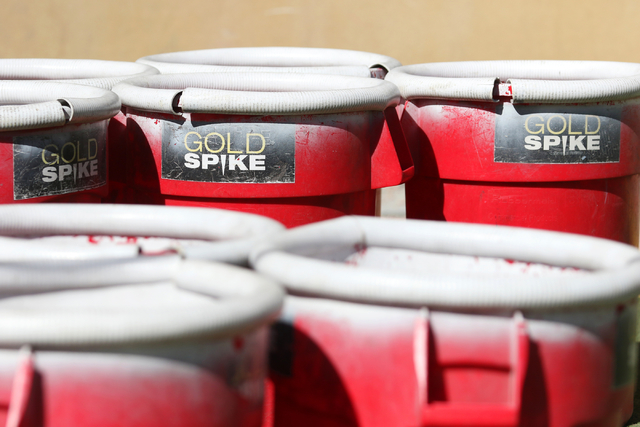 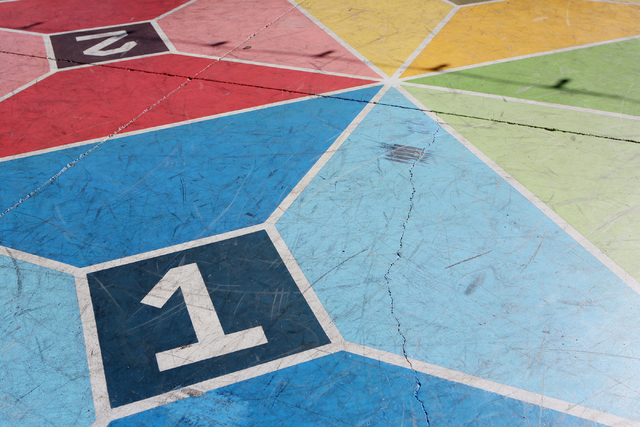 A close up of Four Square game space is shown at Gold Spike Tuesday, March 22, 2016, in Las Vegas. Gold Spike, with new design and ownership by Downtown Project, will celebrate its third year this May. Ronda Churchill/Las Vegas Review-Journal

No one would have dared uttered those words a decade or two ago about the Gold Spike in downtown Las Vegas. The hotel-casino offered cheap rooms and slots for the value-oriented gambler.

The No. 1 description by many was smoke-filled dive for the one-time casino that opened in 1976 and has gone through several owners and an extensive remodel and change of use under its last two.

The Gold Spike of today is geared for a generation that combines work and play.

It’s a place to go during the day, sit on the couch and access Wi-Fi to get some work done or a place to hold meetings with workers from the office. You can eat at the diner or play cornhole beanbag toss with your friends.

And there’s no smoking.

At night, a DJ performs inside, known as the living room, and a band plays Thursday through Saturday in the outdoor courtyard known as the backyard. That’s where visitors can play on an adult playground with a giant chessboard, soccer pool, Twister, giant Jenga, giant Connect Four, giant beer pong and other games. There’s even roller skating every third Wednesday.

“I think what’s happening there says a lot about where downtown Las Vegas is going,” said David Schwartz, director of the Center for Gaming Research at UNLV. “With the proliferation of other gambling options around the country and especially in Southern California, it couldn’t just be the value-oriented gambling operation. It had to reach out and do something else and this shows that.”

The Downtown Grand has an eSports lounge and Schwartz said he expects to see more nongaming options because while people want to come to Las Vegas to gamble, not everything can be centered on slot machines.

“It’s nice to have a place for people to have other things to do,” Schwartz said. “And if the eSports lounge works, you would definitely see more of that.”

This latest edition of the Gold Spike is part of the vision of the Downtown Project in Las Vegas, a $350 million initiative of Zappos CEO Tony Hsieh. The revitalization project includes $200 million for real estate and development and ownership of 11 businesses it owns and operates, including the Gold Spike, and its companion property, the three-story boutique motel Oasis at the Gold Spike. It has 86 hotel rooms between the two and there are also some apartments in the Gold Spike.

Co-working by day, party at night

“The idea at the Gold Spike was to create something that’s a dual use of co-working space by day and turn it into a party at night,” said Maria Phelan, public relations director for the Downtown Project. “I think in terms of what the Downtown Project was looking to do is that a casino didn’t fit the idea of first, unique and best. There’s plenty of gaming down here already, but there wasn’t great co-working space and type of nightlife space that the Gold Spike is. We need the co-work space and a cool place to hang out with your friends.”

The seven-story hotel-casino opened in 1976 and was later acquired in 1983 by long-time casino operator Jackie Gaughan, who sold it to Barrick Gaming in 2004. Three years later it was acquired by Greg Covin and in 2008 the Siegel Group acquired it and gave it a much-needed renovation. It also acquired the shuttered Travel Inn Motel next door, which it renovated, built a pool and combined the neighboring properties.

That modernized look at the Gold Spike remains in place today minus the slots and gaming that were removed when the Downtown Project acquired the property from Siegel in April 2013.

“It was a mess. It was a dump. It was an eyesore,” said Michael Crandall, senior vice president with the Siegel Group. “At the time we bought Gold Spike in January 2008, the revitalization of downtown hadn’t even started yet. Most of the buildings downtown were in pretty bad shape. We had a vision when the property became available to us, and we kind of saw potential in downtown and in the property.”

The best way to describe the Gold Spike is that it had a tough crowd and had for a while, Crandall said. Most of the people had a backpack or were carrying a bag. Many used it as a place of shelter rather than a place to frequent and spend money, he said.

“It was tough,” Crandall said. “It was a lot of hard work to clean that place up. It is one of the many properties downtown that was blighted and mismanaged and no one was paying attention to the operation. There was no tender loving care put into the property at the time we took over. You walk in there today and you can see a lot of the renovations we did to the property.”

Crandall supports what’s been done to the Gold Spike but would have loved to have seen gaming remain since it has history with a legend like Jackie Gaughan owning it.

It looks nothing like a casino today but a combination playground and bar. Parents are there with their kids playing games during the day. Many who hang out there during the day night are those in their 20s and 30s.

“Times have changed and the Downtown Project and Tony have a different vision,” Crandall said. “It’s cool that the name is still alive and they are taking it into a fun, hipper crowd in there. It’s good, it’s breathing life.”

Many older Las Vegas residents and visitors to downtown who have gone into the Gold Spike in the past can’t believe it when they walk in today, said Kristine Reynolds, the Gold Spike’s assistant general manager.

“I had a woman come in and peeked and was astounded by how much it’s changed,” Reynolds said. “Our sign still says casino, but it’s more successful now without the gaming.”

A group of young 20-something patrons from Southern California recently spent the afternoon at the Gold Spike playing cornhole and darts. They were just hanging out and laughing.

Bo Wolfe, 21, of Anaheim, said the group found the place in a Google search of the coolest bars in downtown Las Vegas. They saw it featured cornhole, and he and his buddies wanted to play.

“I don’t know its reputation, but it’s pretty cool and the games are fun,” Wolfe said. “We were over at Binions and the Golden Nugget, and we wanted to take a break from all of that.”

The Gold Spike is getting some national attention. MTV shot the 31st season of the Real World on Gold Spike’s seventh floor suite in programming that is airing now. In March, it hosted an event for the Nightclub&Bar Media Group and 2,000 people. There was nothing in town large enough for an event where people could mingle and network without music drowning out conversation, said Michael Sullivan, the director of industry relations for the group who is based in Las Vegas.

“The beauty of the Gold Spike is that they have a variety of games, and a DJ on the inside and band on the outside,” Sullivan said. “We did food trucks in the parking lot, and it was a perfect synergy. Everybody had their own space. It offered something for everybody. It’s a great place to hang out.”

Welcome to the new Gold Spike.