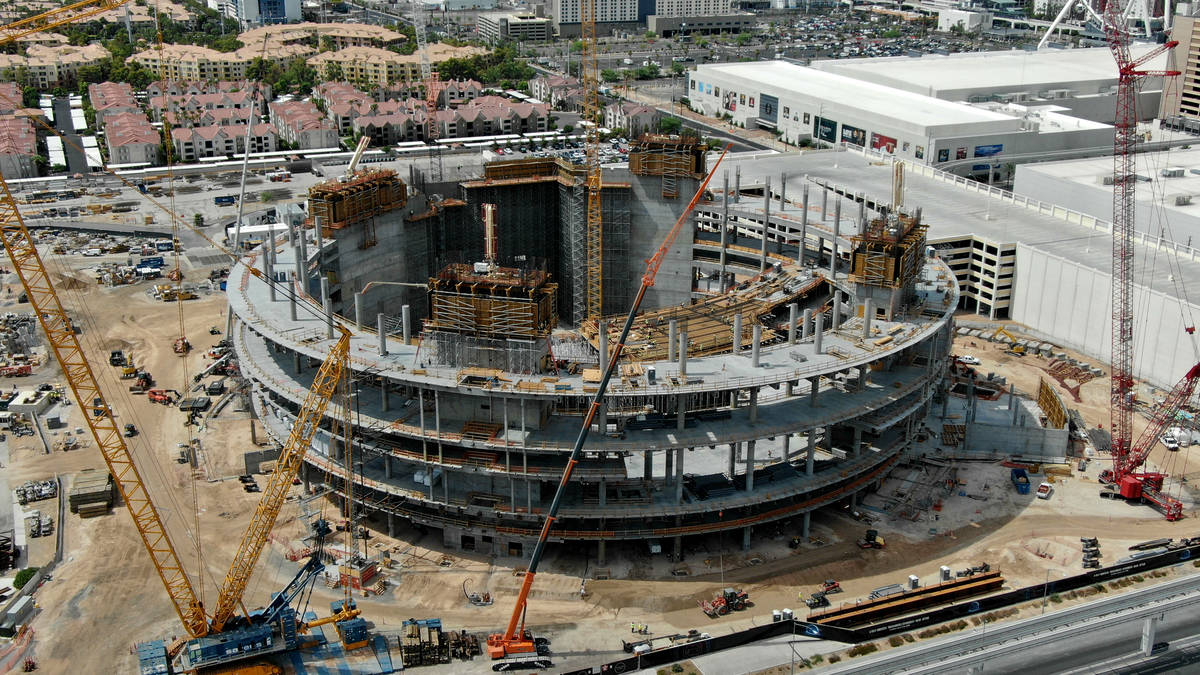 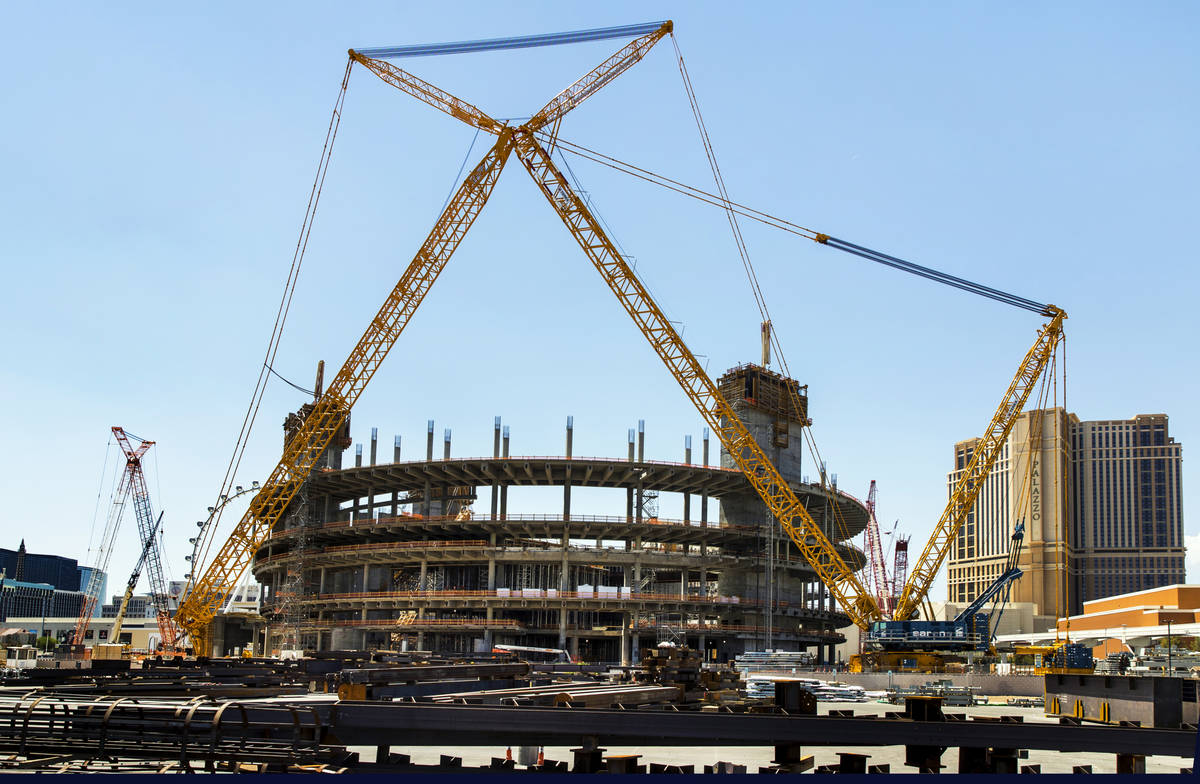 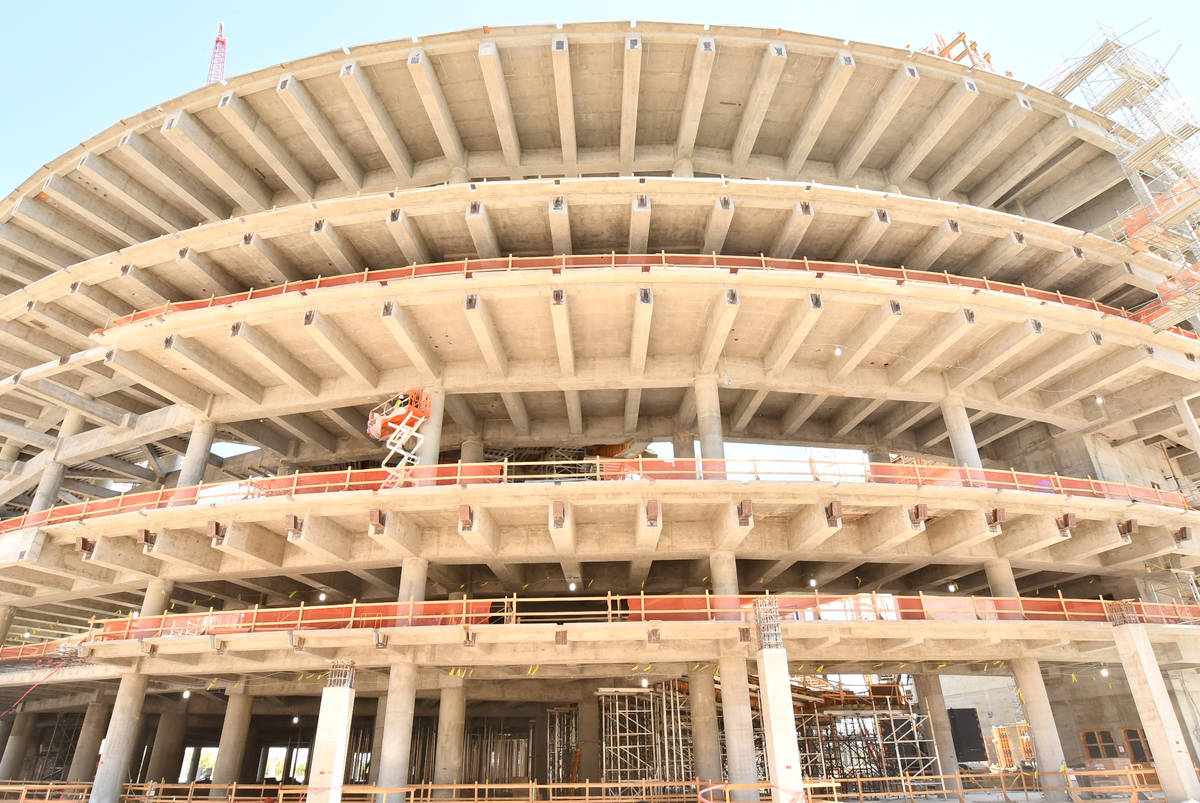 Several levels of The MSG Sphere at The Venetian are visible at the construction site just east of The Venetian. (Madison Square Garden Entertainment Corp.) 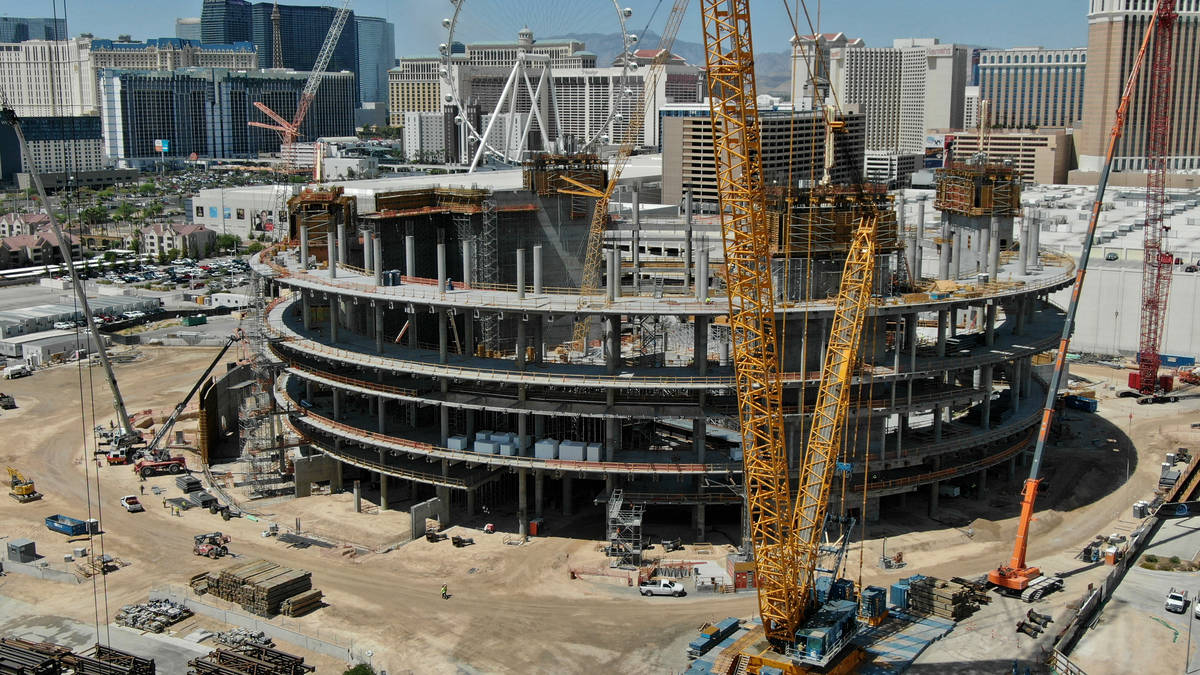 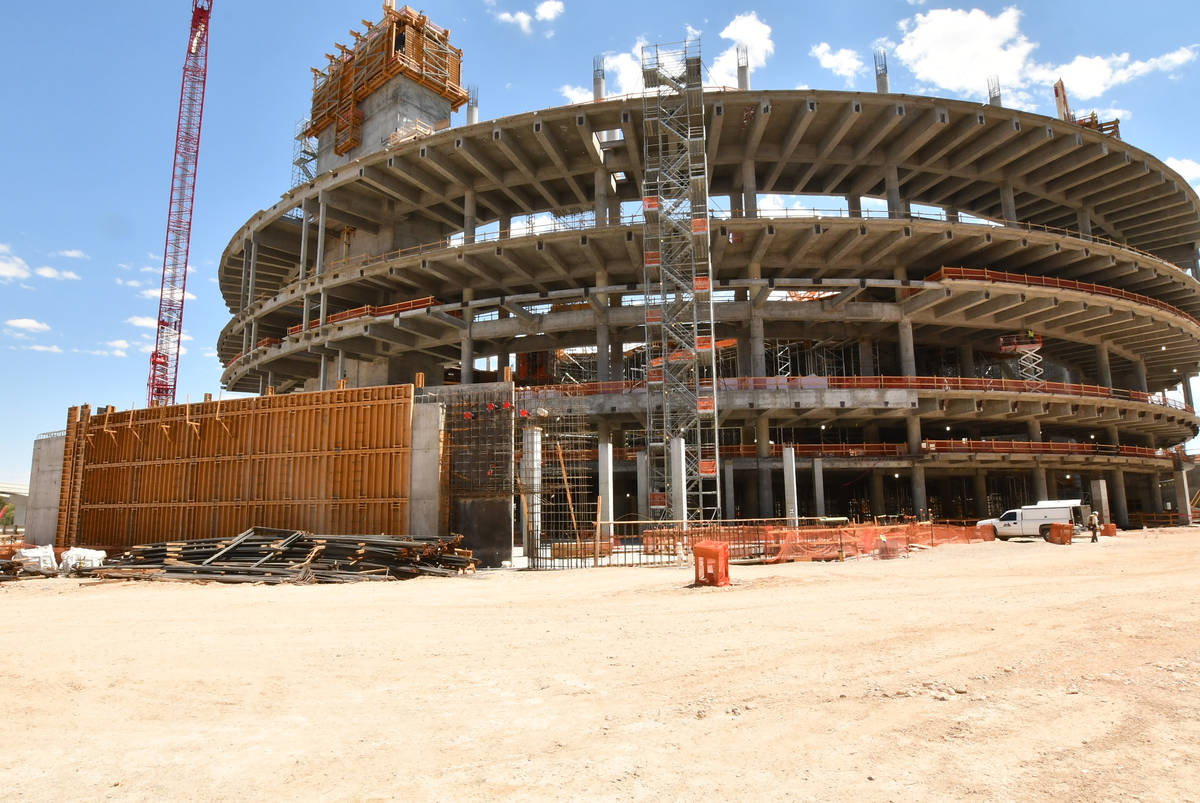 Several levels of The MSG Sphere at The Venetian are visible at the construction site just east of The Venetian. The building is scheduled for completion in 2023. (Madison Square Garden Entertainment Corp.) 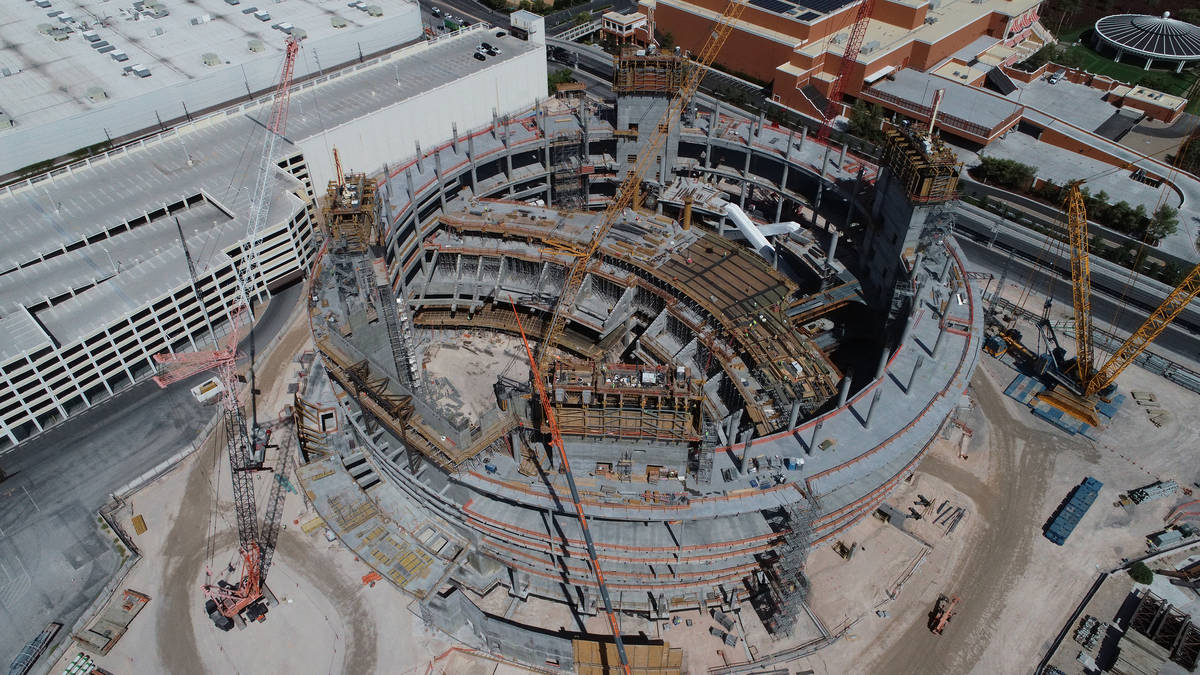 An aerial view of The MSG Sphere at The Venetian shows the base of the structure, the venue's stage and the beginnings of the 17,000 seats that will be built into the $1.66 billion venue. (Madison Square Garden Entertainment Corp.)

There’s tons of work to do at the MSG Sphere at The Venetian.

A representative of Madison Square Garden Entertainment Corp., the New York company building the first-of-its-kind entertainment venue in Las Vegas, on Wednesday detailed how it will complete the $1.66 billion project by 2023 under its new extended timetable.

Crews broke ground on the project in 2018 and initially had hoped to have it completed by the end of the 2021 fiscal year, in June.

There are three big tasks that will involve heavy lifting planned over the next 15 months.

“We are continuing to move forward with critical construction work on MSG Sphere,” said Nick Tomasino, vice president of construction for Madison Square Garden Entertainment. “Over the next 15 months, we will complete the venue’s concrete elements, before continuing structural steel erection and ultimately building one of the most complex components of construction — the steel-domed roof.”

In a release last week, company officials said supply-chain issues initially slowed Sphere construction. Later, the coronavirus pandemic that has darkened entertainment venues nationwide resulted in a construction schedule change and some of those plans were outlined Wednesday.

The revised schedule will focus on three areas: completing all superstructure concrete, continued structural steel erection, and building the steel-domed roof. Up to 300 workers will be on the job site just east of The Venetian’s Sands Expo and Convention Center.

The concrete superstructure work will involve completing the proscenium wall behind the stage, as well as the stair and elevator cores. Concrete decks at Level 5 also will be poured.

To complete the wall, two giant steel tub girders, each weighing 120 tons, will be placed at Level 6.5. Once in place, the tub girders, which will provide support for the domed roof, will be filled with concrete.

The girders will be placed by operators of the DEMAG CC-8800 crawler crane, which is being repositioned to the south end of the site from the north. The crane — the world’s fourth largest — has been on-site since February.

Once the concrete work is completed, structural steel will be placed.

Beams will be installed at levels 6, 7 and 8 as well as exterior ring beams at Level 6.5.

That’s when the real fun begins.

Once all the inboard decks and ring beams are in place, crews will begin working on the signature feature of the building — and the most complex part of the project.

The 13,000-ton steel-domed roof will be largely self-supporting. The DEMAG CC-8800 will be used to place a 182-ton compression ring for the domed roof, the heaviest lift of the project.

The type of work required will dictate the size of the workforce on the project, with 300 the most expected at one time.

Once the 17,000-seat venue is completed, MSG Entertainment expects the Sphere to be the busiest in its portfolio, which includes Madison Square Garden and Radio City Music Hall in New York.

With a 160,000-square-foot wraparound screen, the Sphere is expected to be home for daily show programming, headliner performances and corporate presentations for trade shows, meetings and conventions staged at the nearby Sands Expo convention center and The Venetian Congress Center.

The Review-Journal is owned by the family of Las Vegas Sands Corp. Chairman and CEO Sheldon Adelson. Las Vegas Sands operates The Venetian and Sands Expo & Convention Center. The Sphere is a project by Madison Square Garden and Las Vegas Sands.