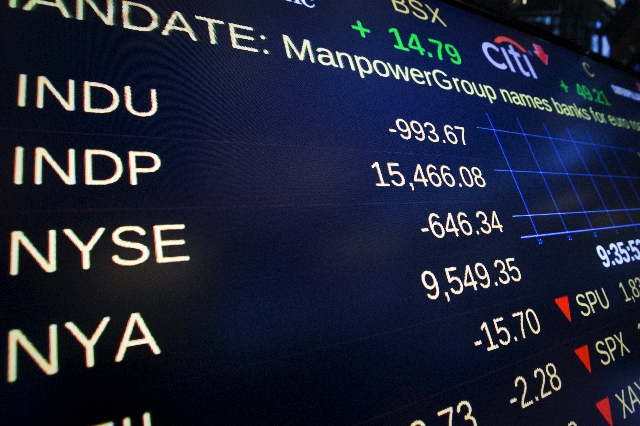 A screen shows the Dow Jones Industrial Average, on the floor of the New York Stock Exchange just after the opening bell August 24, 2015. REUTERS/Brendan McDermid

While a roller-coaster on Wall Street this week has left investors exhausted, potential borrowers may benefit, at least in the short term, from the tumultuous trading in securities markets.

The Federal Reserve, which had held interest rates at essentially 0 percent since 2009, had been expected by many economists, including 82 percent surveyed by The Wall Street Journal this month, to start slowing down the economy as early as September.

Fed chairwoman Janet Yellen even said it was all but certain that rates would increase by the end of the year.

However, the news on Wall Street this week changed that, and economists from the research team of Barclays said Tuesday that they expected the Fed could sit on its hands until March 2016.

“If this episode of financial market volatility proves transitory, the (Federal Open Market Committee) could raise rates in December,” read a note from Barclays on its daily analysis. “However, if it proves durable or reveals greater-than-expected weakness in global activity, the FOMC may push the first rate hike beyond March.”

Despite predictions of economists, Dennis Lockhart, president of the Federal Reserve Bank of Atlanta, said in a speech Monday he still expected the Fed to raise rates this year, gradually.

“I expect the normalization of monetary policy — that is, interest rates — to begin sometime this year,” Lockhart said. “I expect normalization to proceed gradually, the implication being an environment of rather low rates for quite some time.”

The Fed is clearly weighing its options, but if outside analysts are correct, banks will continue to enjoy the same freedom to borrow from one another at practically no interest — a luxury they’ve had since the Great Recession.

This has several benefits for homeowners, as The Wall Street Journal (paywall) has noted. First, banks typically tie their prime rates and propensity for home equity loans to the Fed’s interest rate. Simply put, homeowners who need money now still have time to open a line of credit at current rates using their home as collateral.

The second benefit concerns mortgages. Those looking to buy a home may have until early next year to get a fixed-rate mortgage, the most common option and widely considered safest bet for homeowners, at current rates.

The most dramatic impact of the Fed’s decisions could be for those with adjustable-rate mortgages. These mortgages typically re-adjust according to the markets every 5 or 15 years, meaning those who bought a home in 2000 or 2010 may be locked into a much more favorable rate if the Fed pushes hikes back to 2016.

While some borrowers should celebrate the impact this week could have on the interest rates, those with reason to grouse are those with savings accounts.

“Ever since the financial crisis, folks who put their money in the bank have gained next to nothing,” noted Patrick Gillespie of CNN. “With interest rates so low, people who played it safe have been getting the short end of the stick.”

While the 2008 crisis that has kept interest rates down happened closer to home, it’s largely been an economic slowdown in China that has led to this week’s erratic fluctuations on Wall Street.

U.S. manufacturers, like Apple and oil companies, have suffered in recent weeks from uncertainty in China, according to U.S. News and World Report. With the two economies so connected, the Fed is less likely to take any action in the near future that would hinder American growth.