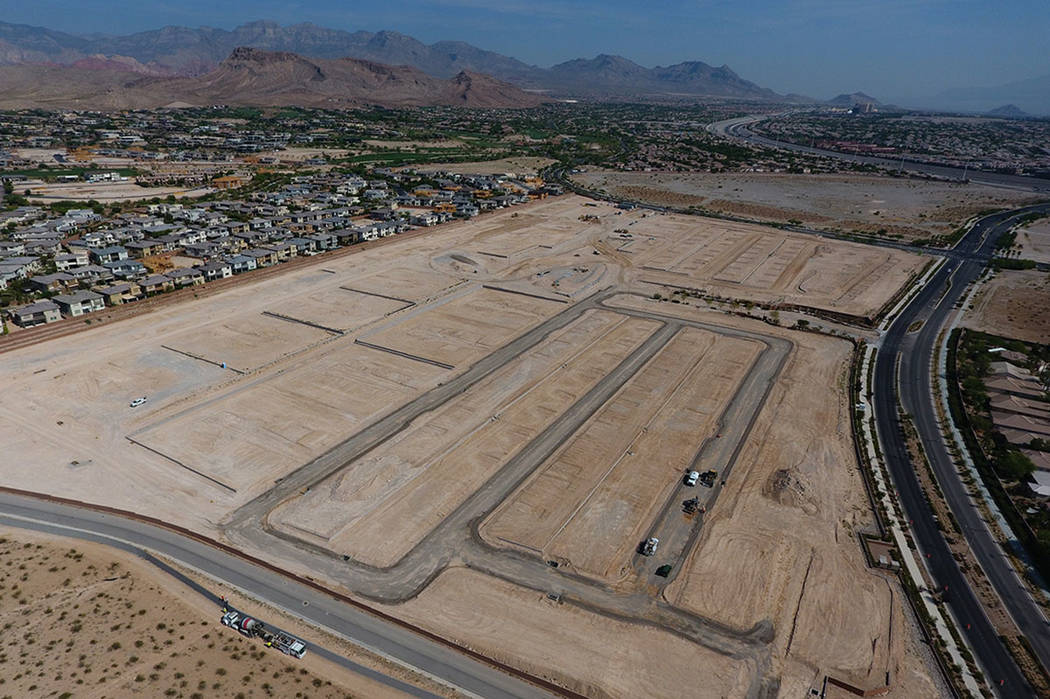 A 55-acre lot is prepared for the construction of 354 homes in Shea Home’s Trilogy, an age-restricted community, at the corner of Town Center and Flamingo in Summerlin on Tuesday, July 18, 2017. (Michael Quine/Las Vegas Review-Journal) @Vegas88s

Leading the pack locally was Summerlin, where builders sold 1,052 homes, up 37 percent from 2016, according to separate reports this week from two firms, RCLCO and John Burns Real Estate Consulting.

Summerlin’s sales tally was fourth-highest in the country among U.S. master-planned communities, the firms reported.

Buyers also picked up 837 new homes in Inspirada, up 48 percent and No. 8 in the country, their reports said.

Some data differed slightly. According to RCLCO, Cadence was 22nd nationally for sales, and sales climbed 10 percent in Mountain’s Edge. For Skye Canyon, the firm did not report comparison sales figures for 2016.

According to John Burns, Cadence was 23rd nationally for sales, and sales climbed 9 percent in Mountain’s Edge and 93 percent in Skye Canyon.

Overall in Las Vegas, homebuilders’ sales totals are climbing but remain a fraction of what they were during the mid-2000s bubble and in the 1990s. But they fetched record prices last year amid rising demand, plunging inventory of previously owned homes, higher development costs and a focus on building bigger, pricier houses.

In master-planned communities, landowners draw up which sections will have homes, retail, parks and other components, and they often sell land in pieces to developers who build housing tracts and other projects.

Summerlin spans 22,500 acres along the valley’s western rim and has more than 100,000 residents. It is the largest master-planned community in Las Vegas and is being developed by The Howard Hughes Corp.

Inspirada, in Henderson on the southern edge of the valley, is being developed by builders Beazer Homes, KB Home, Pardee Homes and Toll Brothers.

Cadence, off Lake Mead Parkway east of Boulder Highway in Henderson, is being developed by The LandWell Co.