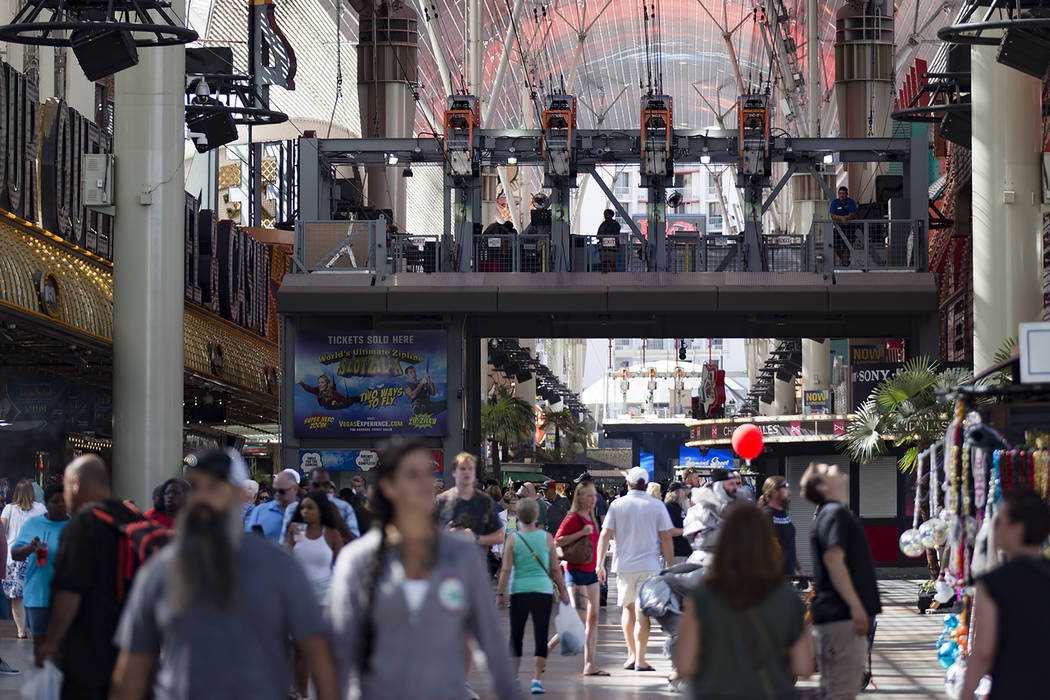 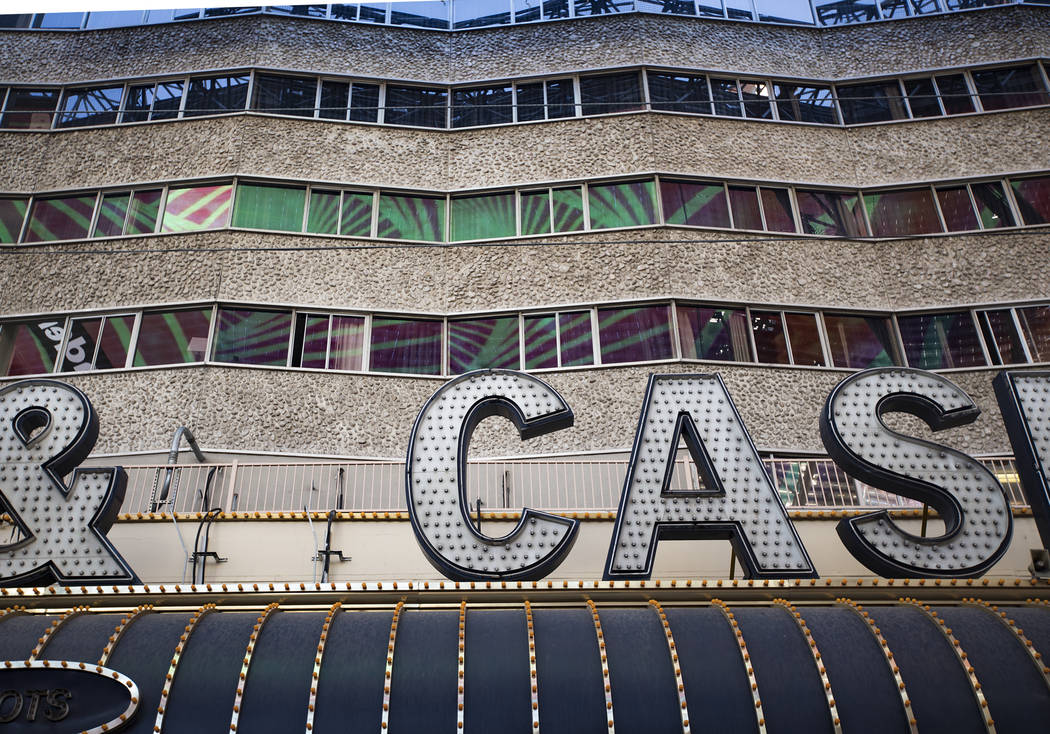 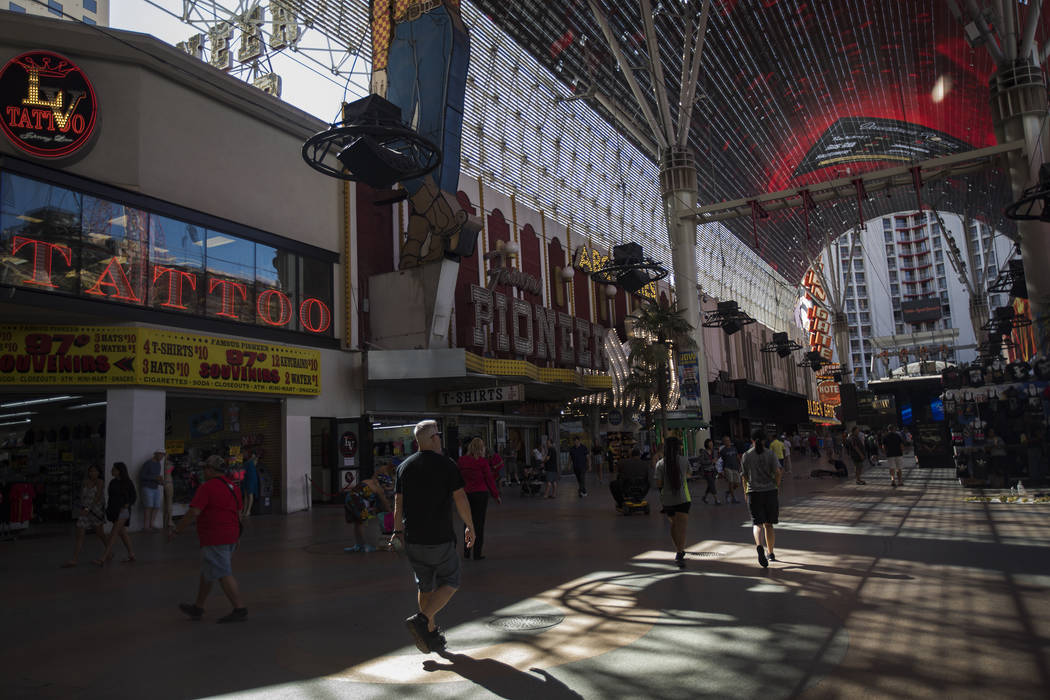 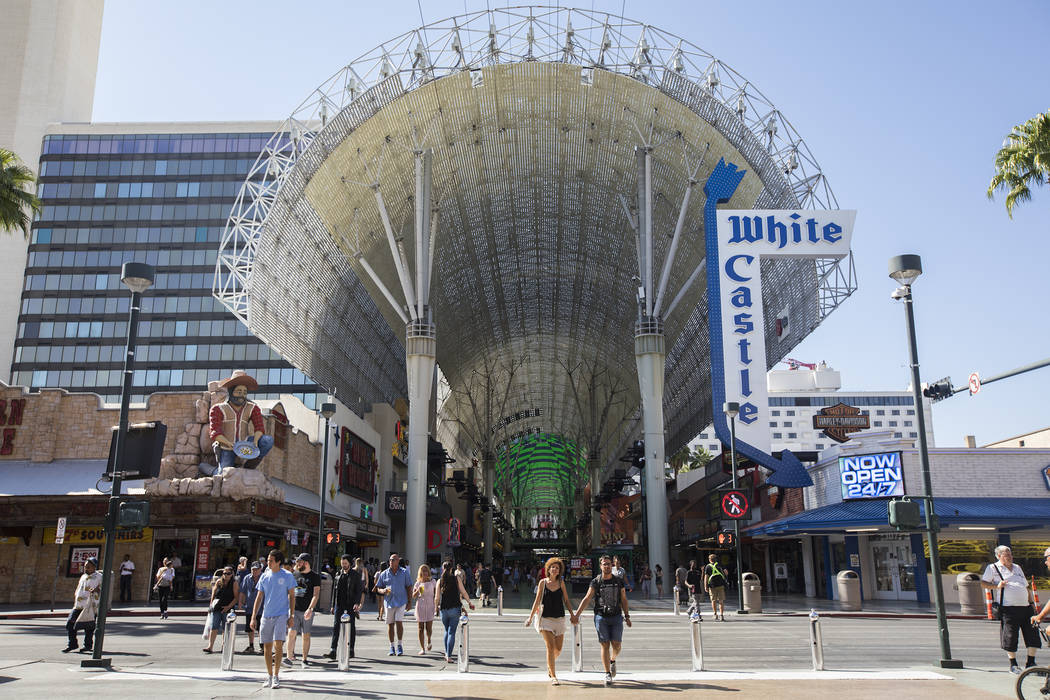 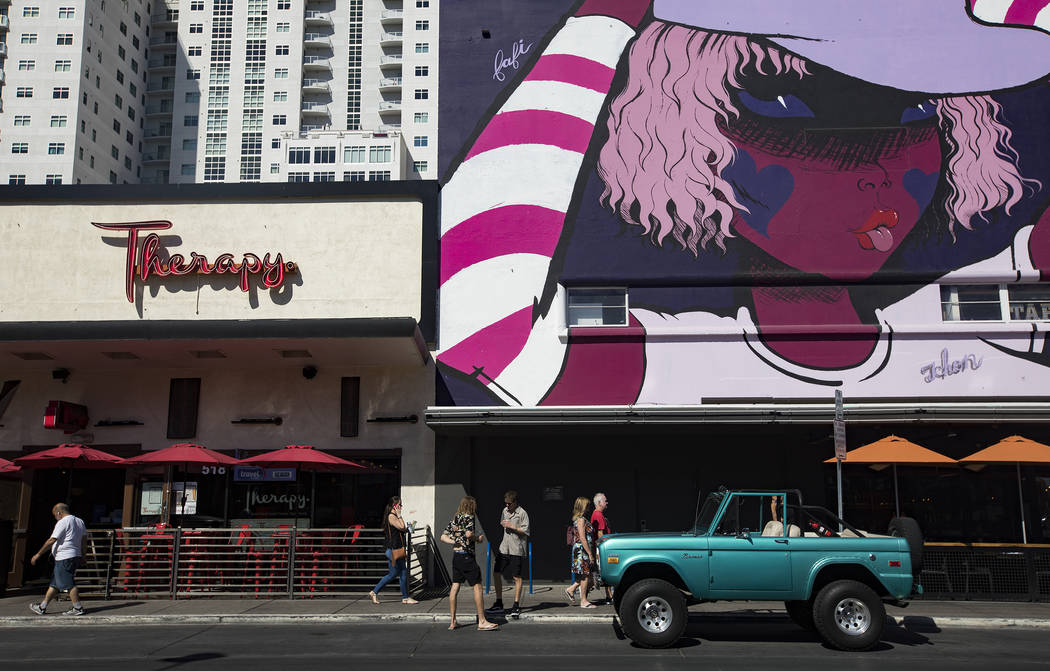 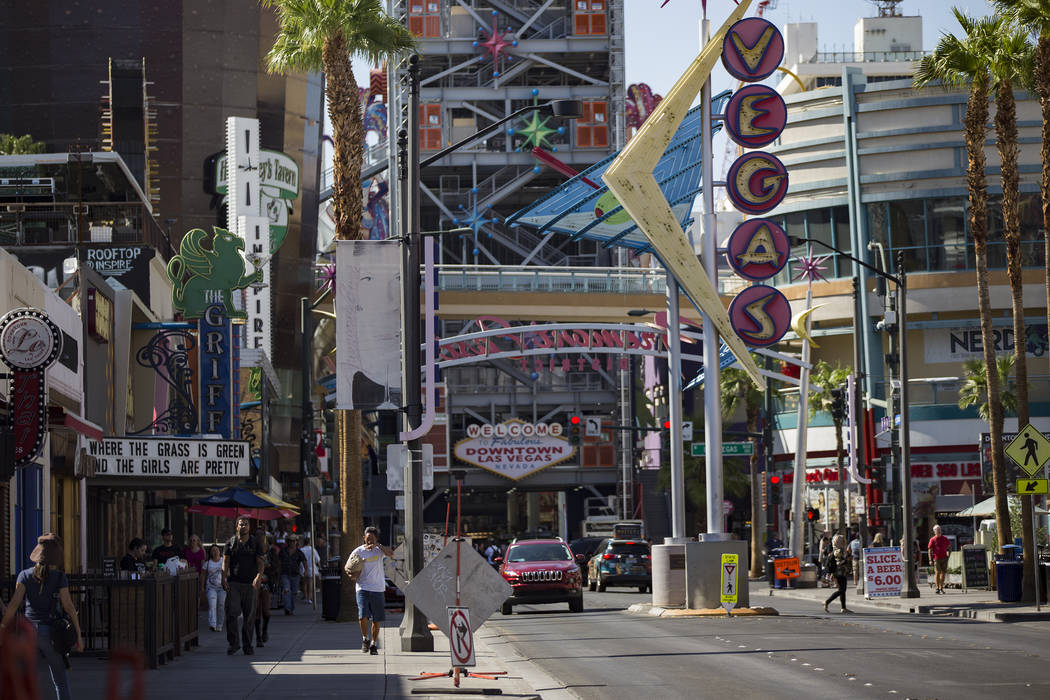 There’s Circa, a 777-room hotel-casino set to open next year. Farther west, the Downtown Grand is working on building a new hotel tower. And high above the bustle of the crowds, the Fremont Street Experience canopy flashes signs saying it’s undergoing upgrades.

These investments are a testament to the area’s recent success, according to experts. The July gaming win in downtown Las Vegas rose 5.83 percent from a year earlier, according to data from the Nevada Gaming Control Board. On the Strip, it fell 0.3 percent.

For an area that still brings in a majority of its revenue from the casinos, this growth has had a dramatic effect.

“There’s a lot more going on now than three years ago,” said Derek Stevens, owner of the D Las Vegas and Golden Gate and developer of Circa. “I feel very bullish on downtown. Obviously, that’s where I put my money.”

Inside the Fremont Street Experience main office on a September weekday, president and CEO Patrick Hughes sat inside a meeting room stationed high above the crowds.

It’s a prime spot for people watching. Below him, Hughes could see visitors exploring Fremont Street — taking in the bright lights of the canopy, sipping on drinks on their way to a casino or snapping photos with a street performer. Over the past few years, the number of people passing below has only grown. Hughes points to several reasons why, including the variety of experiences downtown and the area’s bang for the buck.

He motioned outside the window, where cars sat in free parking spots, near signs advertising deals such as two-for-$5 Budweisers.

“You don’t see ads like that on the Strip,” Hughes said. The downtown casino owners “make a concerted effort to maintain a value proposition.”

It’s not just affordability that has been drawing more people downtown, he said.

The Fremont Street Experience has been investing in more digital advertising, spreading word of attractions like its free concert series. Other events, like Life is Beautiful, bring in hundreds of thousands of people every year. And over on the east side of Fremont Street, Hughes said, the clubs, bars and restaurants regularly draw in younger demographics.

“One has to give credit to (Zappos CEO) Tony Hsieh,” he said. “That was the community he was building, … one of random connections and interactions, and that’s certainly happening on Fremont East.”

“Millennials are curious,” he said. “They don’t mind spending their money for an experience, and history is one of those.”

In all, Hughes said, downtown Las Vegas has evolved to provide a variety of attractions. Its efforts seem to be working; in 2014, only 36 percent of Las Vegas visitors said they had visited downtown on their current trip. By 2018, that figure was 46 percent, according to the Las Vegas Convention and Visitors Authority.

“There are new restaurants, new bars, entertainment going on all the time. … You have to be impressed with what you’re seeing downtown,” said Jeremy Aguero, principal analyst for Las Vegas-based Applied Analysis. “You’re seeing a new energy and a new way in which that area is being viewed by visitors and residents. It’s becoming more attractive.”

At an event this month celebrating the Plaza’s recent renovation project— which upgraded more than 100 rooms and suites — Las Vegas Mayor Carolyn Goodman took note of the recent improvements in the area.

“To see the changes and the involvement in the city in all aspects, everything that we’re doing here … (is) enriching the quality of life in downtown, making it exciting,” she said.

The Plaza’s recent $15 million renovation is just one example of the efforts helping to attract more people downtown, according to Plaza CEO Jonathan Jossel.

“Downtown always had appeal, but there wasn’t anything downtown to attract people here long term,” he said. “But there’s improvement. People are now spending more time down here.”

Hughes said those visitors are often middle-class Americans; the affordability can draw in those seeking a $8.99 steak as opposed to the $100 dinners from celebrity chefs found on the Strip.

But Hughes said it’s also a melting pot of young locals and affluent visitors looking to gamble at places like the Golden Nugget or, eventually, Circa — once it opens in December 2020.

“Downtown’s really a blend of the Las Vegas customer,” Stevens said. “When you get 20 million people visiting downtown, it’s the same (kind of) customers that go to the Strip.”

Jossel said he’s noticed more downtown customers who are interested in gambling at the tables and slot machines.

“We’ve seen our our own revenue growth in double-digit growth every month, almost the last two years,” Jossel said. “For us, (we) just keep focusing on doing what we do well, and that’s growing out gaming revenue. … If gaming keeps going up, why veer away from that?”

The Fremont Street Experience canopy debuted in 1995 with a mission to drive downtown visitation and investments.

Nearly 15 years later, efforts are still being made to revitalize the area. Hughes said he doesn’t think that task has been completed, but downtown has come a long way over the last few years.

Aguero also pointed to social challenges in the area, such as homelessness.

“I think (revitalization efforts have been) significant, but there’s still a long way to go to meet downtown’s full potential,” he said, alluding to efforts to build a Major League Soccer stadium.

Stevens said he’s optimistic about the future of downtown and Las Vegas as a whole.

“One great thing about Las Vegas is it’s always being revitalized,” he said. “With Resorts World, the Raiders stadium, the MSG Sphere, Circa and the (Las Vegas) Convention Center, you’ve got five really transformational projects for all of Las Vegas. And downtown is part of it.”

In the meantime, Hughes said local operators are taking the changes in stride.

“There’s always room for growth,” he said. “We all know this is a wave, and there will be a dip. There will be swings. (But) right now, everything’s on a positive note.”