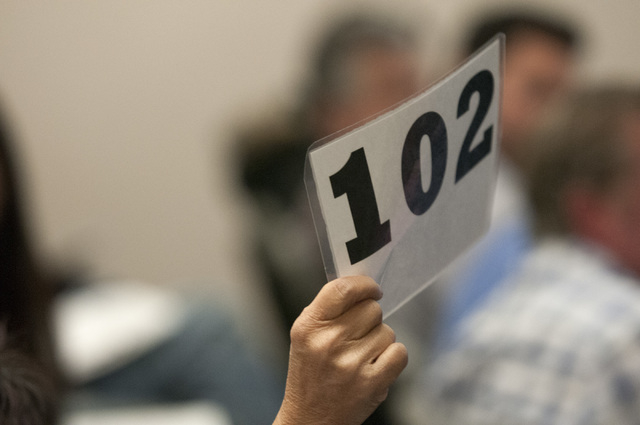 The federal government will hold its largest local public-lands auction in 11 years on Tuesday, April 26, 2016, as the BLM puts 40 parcels totaling nearly 900 acres up for sale. (Las Vegas Review-Journal)

Get your checkbooks out.

The federal government on Tuesday will hold its largest local public-lands auction in 11 years, as the Bureau of Land Management puts 40 parcels totaling nearly 900 acres in southwest Las Vegas, east Las Vegas and Henderson up for sale.

Vacant parcels will be available starting as low as $125,000 — or about half of the median local single-family home price of roughly $220,000.

The sale is an important economic indicator: Land ends up on the auction block after an interested buyer sees a parcel suitable for a specific project. The buyer then asks the city or county to nominate the lot for sale. Lot demand mirrors economic growth, so it’s telling from a demand standpoint that acreage for sale continues to surge.

At 856.2 acres, Tuesday’s auction will be the largest since the November 2005 sale of more than 2,900 acres across the Las Vegas Valley. It’s also 36 percent more land than went on the market in the last auction in November, when 625.5 acres were up for sale.

The biggest lot will be familiar to auction watchers: It’s a 247.6-acre parcel at the southeast corner of Hollywood Boulevard and Cheyenne Avenue that’s become a habitué on the sale block.

The land’s development barriers include a gravel pit, mineral rights that belong to a third party and a location inside Nellis Air Force Base’s live-ordnance loading area.

A limited liability corporation called Sao Tome bought the land at auction in May for that price, but records with the Clark County Assessor’s office show the entity never closed on the purchase. Secretary of state records don’t list the company’s officers.

For shoppers looking for smaller lots, two parcels of 1.25 acres each will be on the market. One at the southwest corner of LeBaron Avenue and Valley View Boulevard will start at $125,000, while the other, near Schuster Street and Valley View, will begin at $173,000.

It will be the bureau’s sixth competitive oral auction since it revived live land sales in January 2014 after a seven-year hiatus. The agency holds oral rather than written auctions when it expects large numbers of interested buyers.

The auction will happen inside the commission chambers at the Clark County Government Center, at 500 S. Grand Central Parkway. Bidder registration opens at 8 a.m., and the sale starts at 10 a.m. Successful bidders must pay 20 percent of the full purchase price with a cashier’s check by 3 p.m.

Sale proceeds go to the state’s education fund, the Southern Nevada Water Authority, public parks and the purchase of environmentally sensitive land. Past auctions have funded the $25 million renovation of Lorenzi Park, as well as the visitors’ center at Red Rock Canyon National Conservation Area, outdoor features at the Las Vegas Springs Preserve and amenities at Lake Mead.

To see the parcels, go to www.blm.gov/snplma, and choose “Land Auction April 26, 2016” under the “In the Spotlight” section.