Matthew and Christi Zenner started planning their wedding in their home state of Washington, but it didn’t take long for them to call it quits. All of the necessary arrangements — from the venue to the guest list — soon became too overwhelming, Christi Zenner said.

Her husband, Matthew Zenner, said they switched plans and booked a Las Vegas wedding instead for a quick, easy destination wedding.

“When you’re thinking about a low-maintenance, stress-free wedding, Vegas is what comes to mind,” he said.

In 2016, the Clark County clerk’s Marriage License Bureau issued 81,325 marriage licenses, about 80 percent of which were given to tourists such as the Zenners. It’s enough for Las Vegas to keep its title of marriage capital of the world, but it’s a far cry from its peak in 2004, when about 128,000 marriage licenses were issued.

While Nevada still leads the pack in number of weddings, the state has taken a hit in marriage rates with the rest of the United States.

Michael Kelly, general manager of the Little Vegas Chapel, has been working in the Las Vegas wedding industry for seven years. While his business has seen growth in recent months, he has noticed the overall decline in marriage rates.

“Hopefully it picks up again,” he said. “We provide folks getting married with a great experience. We can provide a lot of local jobs for folks.”

“It’s an important sector,” she said.

Kris LaBuda, the manager of wedding services for Flamingo and The Linq Hotel and board president of the Las Vegas Wedding Chamber of Commerce, said the wedding industry affects all small businesses involved in tourism, from employees at McCarran International Airport and limo drivers to those working at bakeries and flower shops.

The wedding industry brings more than just jobs to Nevada, LaBuda said. The newlyweds and their guests often have extended stays in Las Vegas, enjoying the city and spending money as tourists on the days surrounding the ceremony.

“We have the opportunity through wedding tourism to bring people to Las Vegas who might otherwise not have come,” she said. 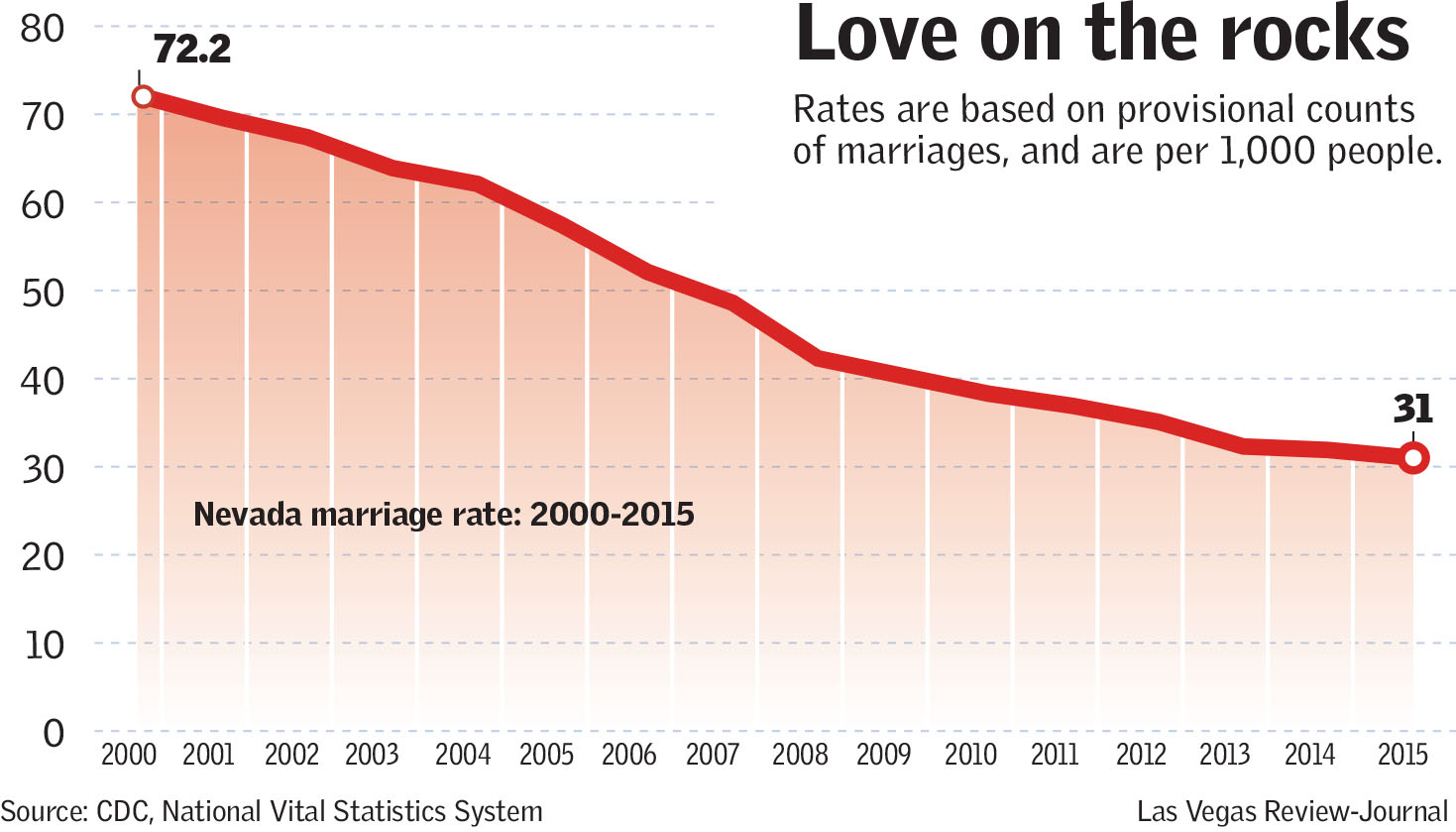 Aimee Stephens, director of marketing and social media at Vegas Weddings and communications chair of the Las Vegas Wedding Chamber of Commerce, said she can point to several influencing factors for the decline. She said it aligns with the economy’s decline, when Las Vegas as a whole was seeing fewer tourists.

Also, Stephens said destination weddings have increased in popularity in the past 15 years — something that can be both positive and negative for the Las Vegas wedding industry.

“We’re competing on a grander scale against more places than we were previously,” she said.

The decline can also be attributed to national trends among millennials, who are getting married later in life than previous generations did. The U.S. Census Bureau reports that that median age at first marriage in the U.S. in 2000 was 26.8 for men and 25.1 for women. By 2016, that number rose to 29.5 for men and 27.4 for women.

Stephens has noticed a similar trend in Las Vegas.

“The millennials, they graduated college or high school in the middle of the economy tanking,” she said. “A lot of people are waiting until they feel more secure in life to move forward with such a big step.”

Goya said the marriage rate decline can be misleading — the absolute number of marriages in the United States is staying “pretty flat” with population growth — but the local wedding industry is still taking action to increase the marriage license rate.

One of the first major pushes against the declining marriage rate was in 2015, when the cost of marriage licenses rose $14, from $63 to $77. The additional funding would be set aside for promoting the Las Vegas wedding industry.

Goya said the additional charge brings in about $1.1 million a year. Last year’s additional funding went to the Las Vegas Convention and Visitors Authority, which used the money to boost marketing and branding for Las Vegas destination weddings.

Maria Phelan, communications manager at the convention authority, said the marketing has been targeting couples in Southern California.

“It makes the most sense to target those more familiar with averages and more willing to travel,” she said. “We’re trying to highlight the fact that there are many different (wedding) choices that Las Vegas offers.”

Local Las Vegas businesses have also united to fight for the wedding industry.

The Las Vegas Wedding Chamber of Commerce was launched in March 2016 to promote wedding tourism in Las Vegas through a partnership with the Clark County Clerk’s office and the convention authority. LaBuda said the chamber aims to build the Las Vegas brand, increase tourism and promote the industry’s influence on Las Vegas businesses and families.

And it seems those efforts have paid off. Stephens said she has seen the marriage license rate stabilize over the past two years.

“It’s still not the numbers from 15 years ago,” she said, “but hopefully we’re hitting that trend where it’s growing.”

The Bureau of Reclamation said that it will reopen Hoover Dam to the visiting public starting Tuesday.