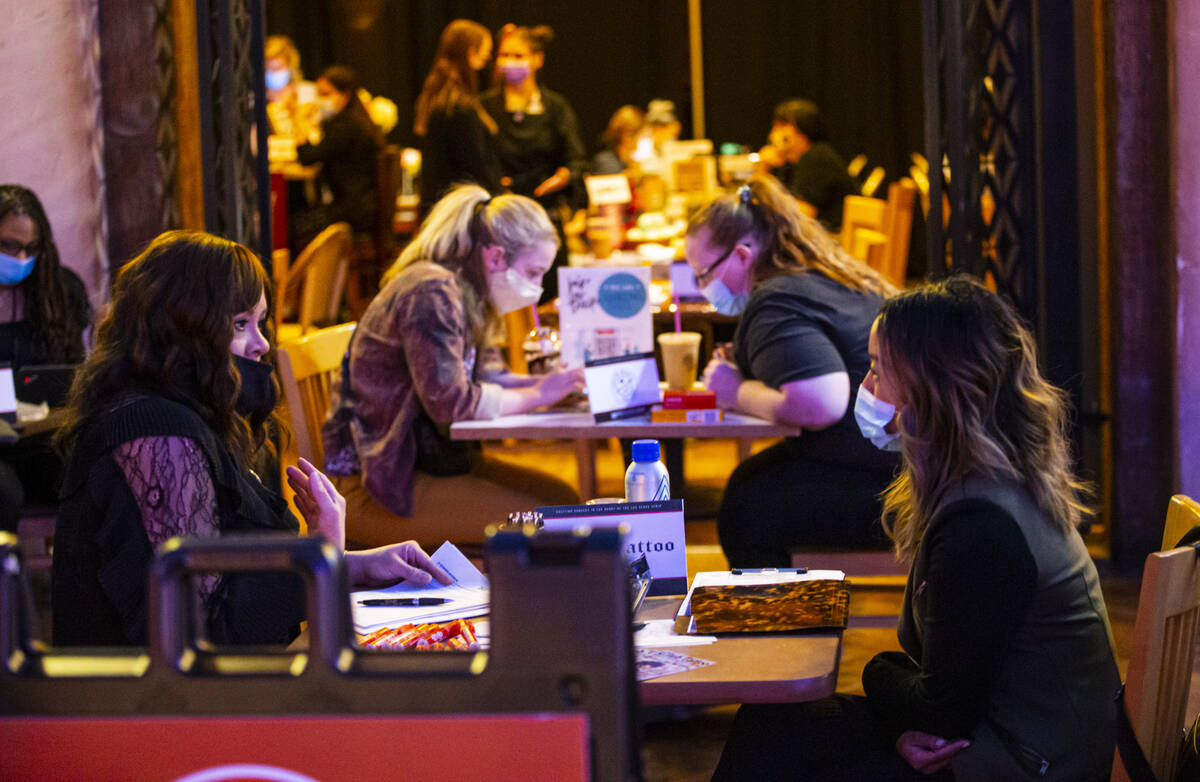 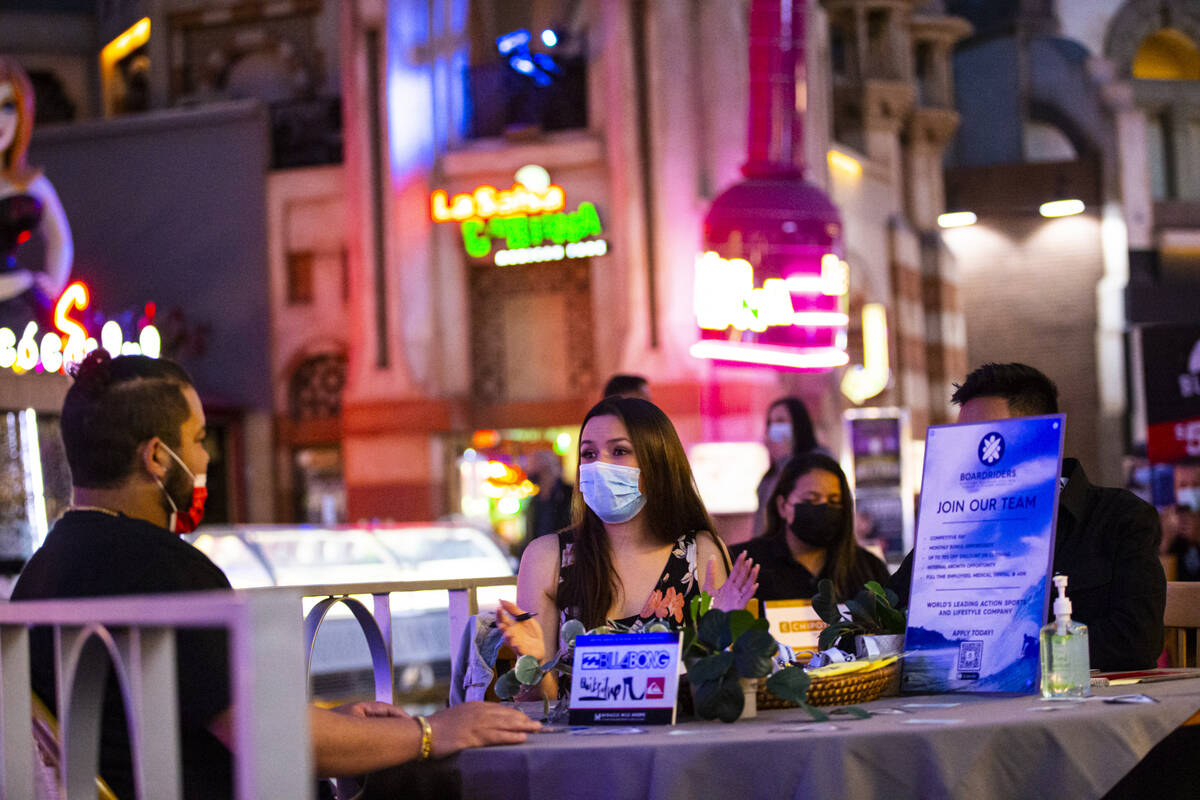 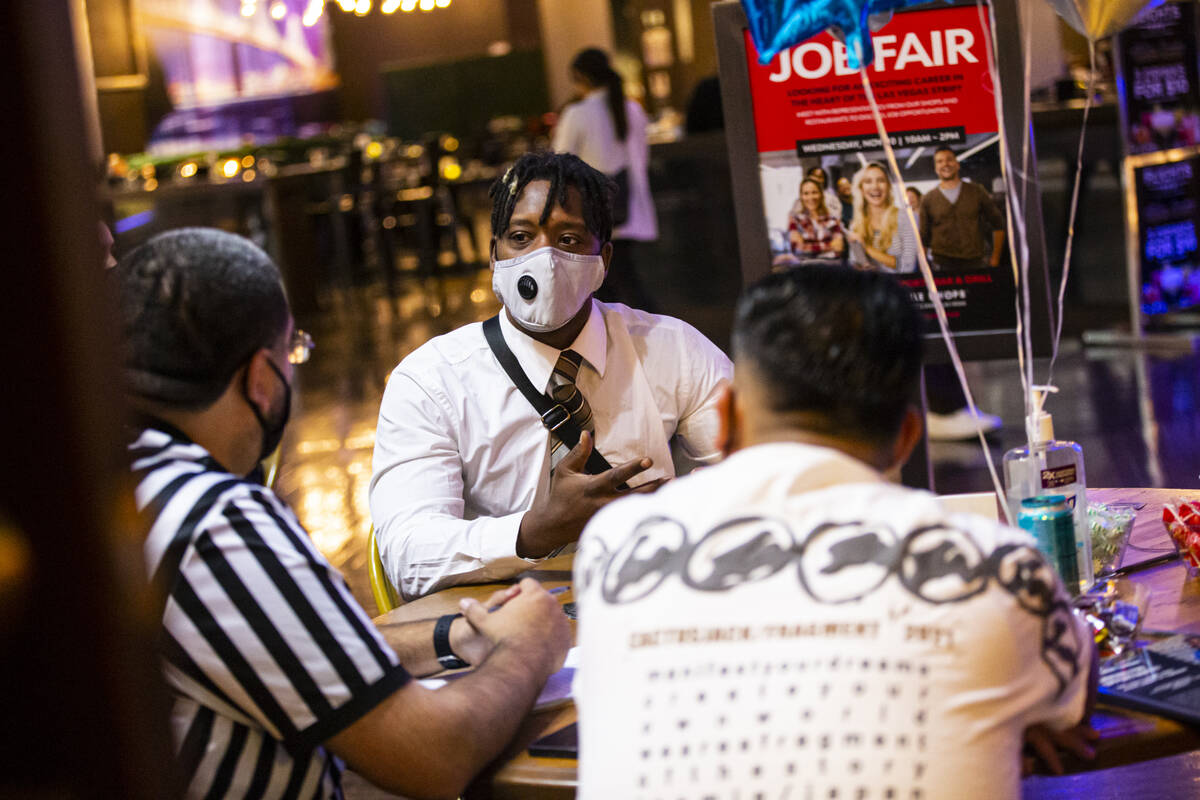 Employers and Miracle Mile representatives described a steady stream of applicants throughout the four-hour fair, tucked into a closed restaurant next to Blondie’s Sports Bar & Grill. The shopping mall employers sought seasonal, part-time and full-time candidates at a time when employers across the country have complained they can’t find people to work.

Candidates Wednesday could walk up, sit down and get an interview right then and there. And that’s just what Joshua Rowry did.

He interviewed at two tables, H&M and Billabong/Quicksilver. Rowry, a 21-year-old Las Vegas resident, is looking for a second job to help pay the bills while he pursues his dream of being a writer.

“It’s been hard to find a second job currently for some reason,” Rowry said. “I don’t know why.”

He said the interviewers were friendly, yet quick and to the point. He signed his name and contact information onto a clipboard and started chatting.

“They were pretty much talking about the hours, the pay rate right up front,” he said.

Rowry sat down with Natasha Fernandes and Jhamir Kong at the Billabong/Quicksilver table just before 2 p.m. In an interview at about 1:15 p.m., Fernandes said that the companies were hiring for part-time sales and supervisory positions and were better staffed than other retail stores.

Fernandes, a senior store manager at both the Billabong and Quicksilver stores in Miracle Mile Shops, said they are actively recruiting, posting on social media and telling current employees to provide a list of five names they could cold call for jobs. She said she came in with no expectations but was glad to meet with candidates, typically skewing age 18 to 25, while competing with 30 other employers.

“They’re able to kind of speed date, if you will, and see what is their perfect fit as well as ours,” she said.

At the time of the interview, she said she had four good candidates for 20-hour-a-week jobs.

“For four hours to meet and walk away with 100 hours worth of people, that’s pretty damn good,” Fernandes said.

Cereal Killerz co-owner Jessica Burns said availability has been her biggest hiring challenge. The company has had no trouble finding employees who could work during the day. But many of her applicants are younger and unavailable to work closing shifts.

“We have to keep looking until we can get all those shifts covered,” Burns said.

Pandora Las Vegas is hiring for permanent positions, and the company also saw a number of young people inquire, Chief Operating Officer Heather Houston said. The company won’t hire people under 18 but had some good candidates “on the horizon,” she said.

Houston said she checked with some other employers who expressed they were in a similar boat — struggling to fill positions. She said “quite a few people came back” to work at valley Pandora stores from the early stages of the pandemic, while others retired, left the valley or moved on to other jobs.

“For whatever reason it’s a tough market to find the people that seem like (they) want to be working and come back in the workforce,” Houston said.