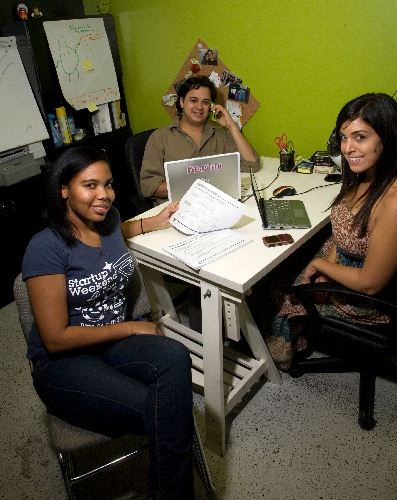 Nevada has more business startups than practically any other state, but that doesn’t mean entrepreneurs here couldn’t use a little help.

Shavonnah Tiéra, co-founder of the Startup Foundation’s local chapter, said Las Vegas is a natural pilot market for the group. It has key resources such as a low cost of living, a favorable tax climate, creative people and "passionate, innovative thinkers," she said.

A Kauffman Foundation study released in March found Nevada tied with Georgia for the highest startup rate in 2010, with 510 of every 100,000 adults, or 0.51 percent of the adult population, opening a business. That was up from 0.38 percent in 2009, and above the national rate of 0.34 percent.

But it’s not enough to help a business open. The group wants to help new companies grow.

"The foundation is focusing more on answering the question of what happens after Startup Weekend — how to write a business plan, how to implement it and how to get existing entrepreneurs involved to move businesses forward," Tiéra said.

That means identifying strengths and weaknesses in local entrepreneur resources, including identifying influential leaders, highlighting existing startup assistance and filling gaps in community resources. The foundation’s local chapter plans to raise $200,000 in donations for the effort in its first year. It’s already eyeing a seed-fund initiative to connect local angels and investors with startup businesses ready to grow.

Bathurst participated in Startup Weekend, a marketplace for fledgling business ideas. There, he found a team of software developers and designers to help him launch Rumgr, a sort of garage-sale application that lets people sell things they don’t want from their smartphones. Rumgr landed more than $5,000 in cash prizes, which it’s using for server and startup expenses. The company also won accounting and marketing help. Rumgr hit the market less than three weeks ago and had about 1,500 downloads and 1,000 items for sale as of Wednesday.

Although Las Vegas has lots of entrepreneurs, it doesn’t have an organized entrepreneurship culture, Bathurst said. The foundation could help change that.

"A startup foundation could be that tipping point that gets people interested in working together to build companies," he said. "It would also help us get the face of our business out there beyond Las Vegas. A lot of companies need to push their business, but without something like a startup foundation, we wouldn’t have those connections."

San Diego entrepreneur Jason Craig agreed that the Startup Foundation could boost his company if it connects him with professionals who can help it grow.

Craig attended the local Startup Weekend with an idea for a business that would combine social networking and personal-journal compilation. During the weekend, he put together a local development team for SoJo, short for Social Journal. His website, sojo.us, is set to launch soon. If funding for SoJo comes through, Craig will move from California to work here full time. A group like the Startup Foundation could help him get there if it offers access to investors and ongoing advice, he said.

"Legal advice, mentors and funding are the hardest things to get a hold of at this point," Craig said. "There are a lot of resources out there, but if they could give you a couple of consults with advisers after Startup Weekend, that would really help steer the ship in the right direction."