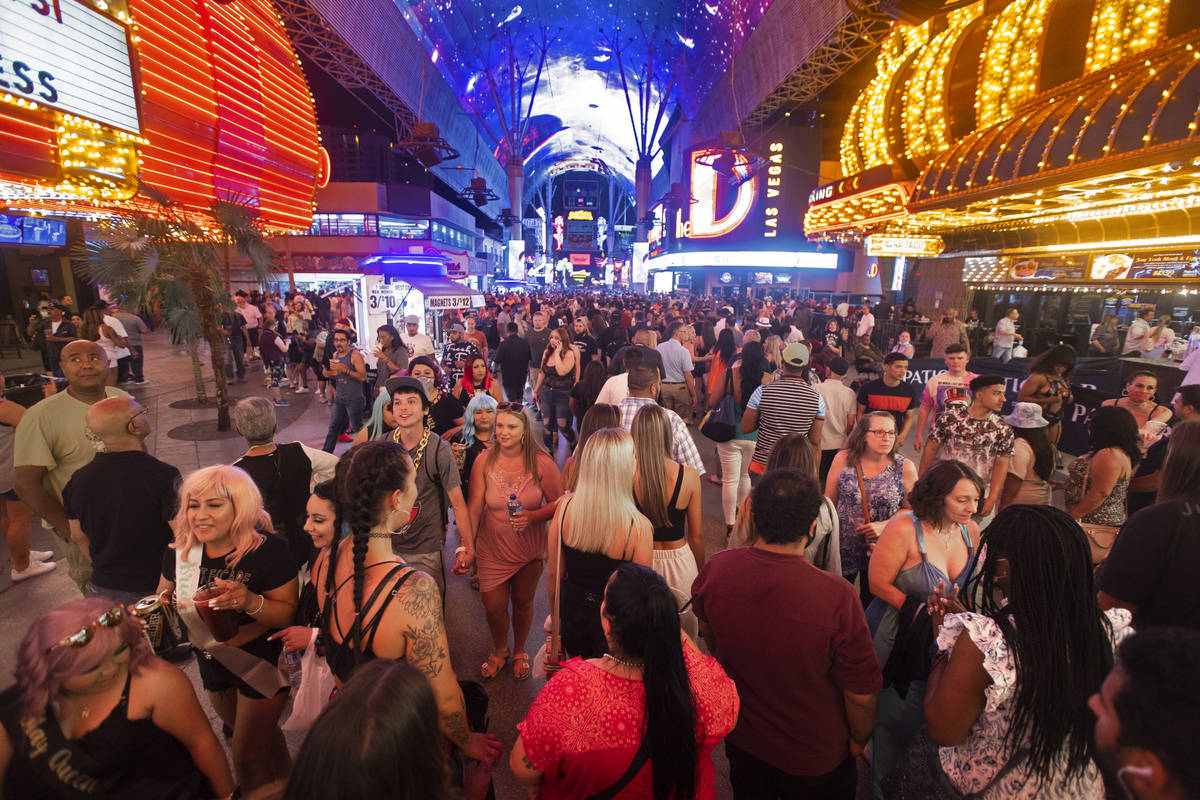 Visitors take in the sites at the Fremont Street Experience during Memorial Day weekend on Saturday, May 29, 2021, in Las Vegas. (Benjamin Hager/Las Vegas Review-Journal) @benjaminhphoto 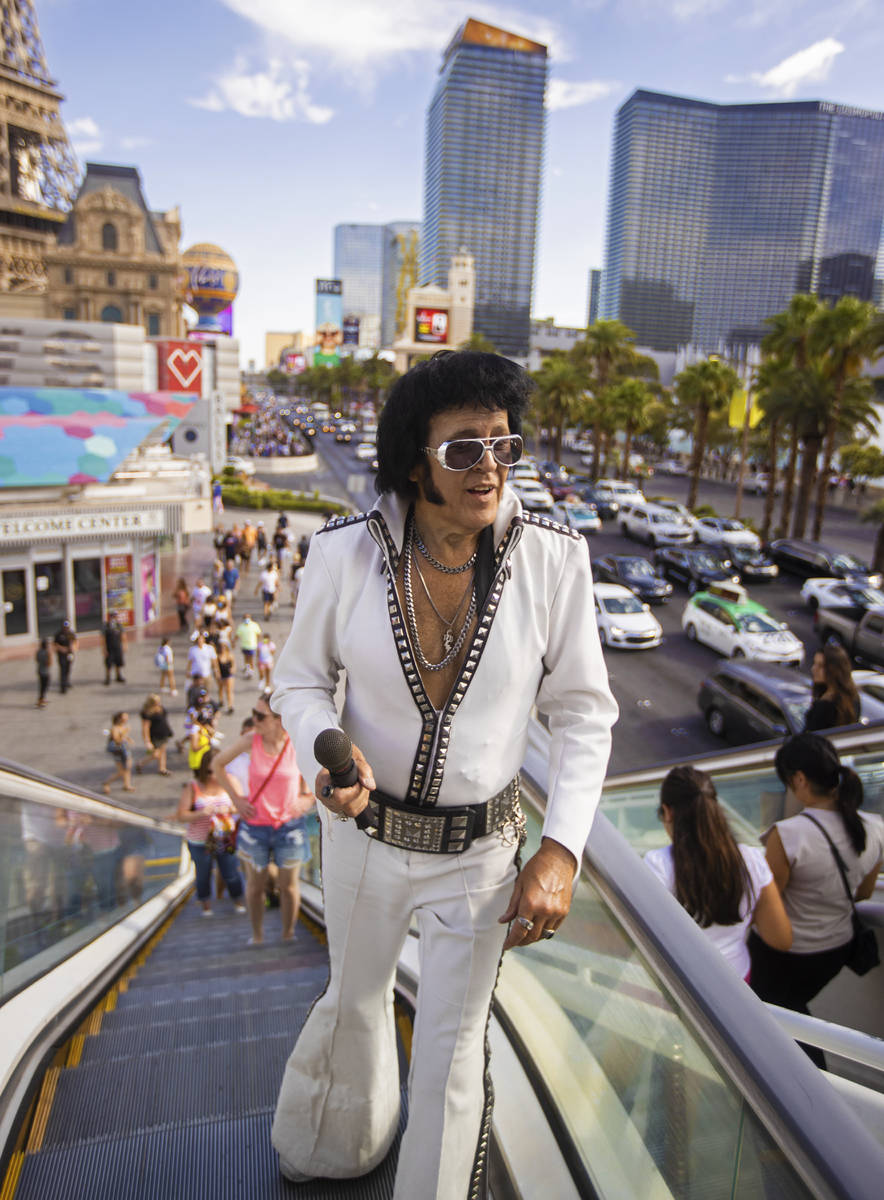 Chris Johnson, known as "Counterfeit Elvis," makes his way up the escalator on the Strip during Memorial Day weekend on Saturday, May 29, 2021, in Las Vegas. (Benjamin Hager/Las Vegas Review-Journal) @benjaminhphoto 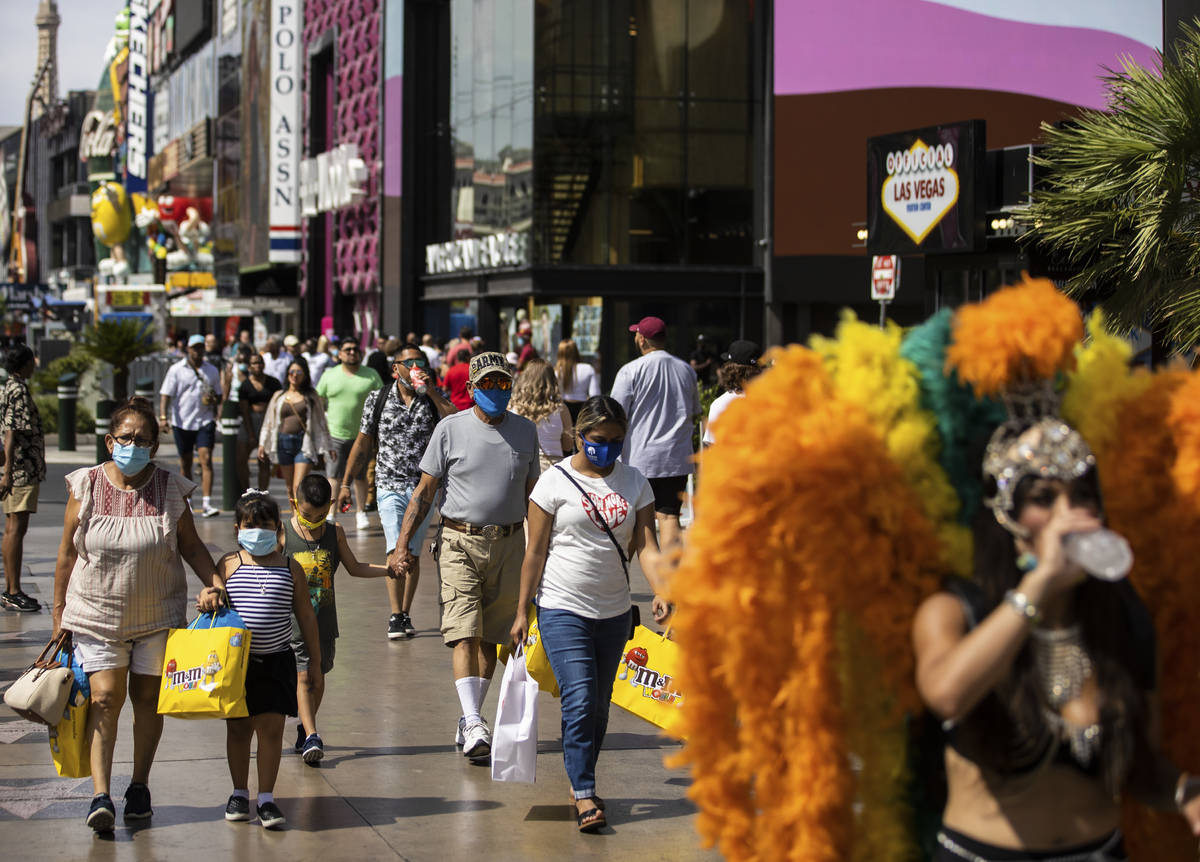 But unemployment remains high as the valley, home to the bulk of the state’s population, continues its recovery from the pandemic’s severe economic fallout.

An estimated 7.8 percent of Nevada’s workforce was unemployed in May, down slightly from 8 percent in April but far below its sky-high jobless rate of 24.5 percent in May of last year, after the coronavirus outbreak sparked sweeping business closures and other chaos, according to seasonally adjusted figures released Tuesday by the Nevada Department of Employment, Training and Rehabilitation, or DETR.

All told, Nevada gained 10,200 jobs in May, with the leisure and hospitality industry adding by far the most jobs of any sector, at 9,500, DETR reported.

“While employment has not fully recovered and unemployment remains high, the trends consistently point to an ongoing recovery as we head into the summer,” DETR chief economist David Schmidt said in a news release.

The valley’s jobless rate has since shrunk considerably, and Las Vegas has been seeing a surge of tourism lately. But the local economy still has a way to go before it reaches pre-pandemic levels.

Some resorts remain closed more than a year after they were allowed to reopen from the state-ordered lockdown, and Las Vegas’ convention industry is only now beginning to re-emerge after the pandemic left groups holding formerly in-person gatherings online.

The first major trade show in the U.S. since the pandemic hit, World of Concrete, was held this month at the Las Vegas Convention Center.

Overall, state officials reported, Las Vegas’ unemployment rate in May was 8.9 percent, compared with 4.5 percent in the Reno area, which doesn’t rely as heavily on tourism to fuel its economy.

Still, the Strip, the valley’s main source of employment, is noticeably busier with tourists than it was several months ago. Vaccines have been rolling out for months, daily life has started to return to normal, and people are taking vacations following more than a year of pandemic-related restrictions and anxieties, and after receiving government stimulus checks.

Tourism could get another boost with the debut of Resorts World Las Vegas. The $4.3 billion hotel-casino is scheduled to open Thursday, and new resorts in Las Vegas have often sparked more tourism to America’s casino capital.

But, he indicated, the comeback is directly linked to the pandemic becoming a thing of the past.

If a new variant of the virus takes hold in Nevada, he said, “that could put a damper on everything.”