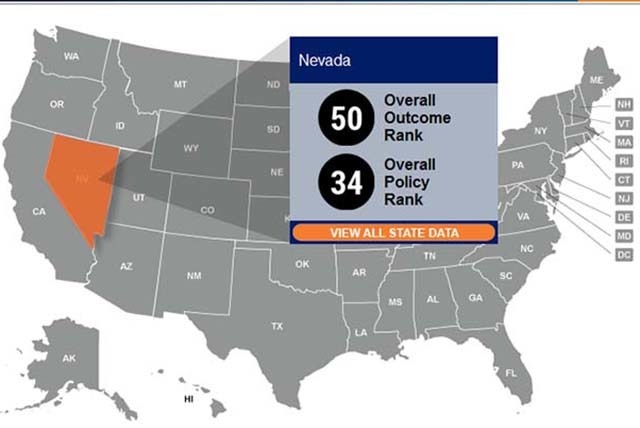 Nevada ranked No. 50 out of 51 in the nonprofit Corporation for Enterprise Developmen's report. More information is available at CFED.org. (Courtesy, CFED.org) 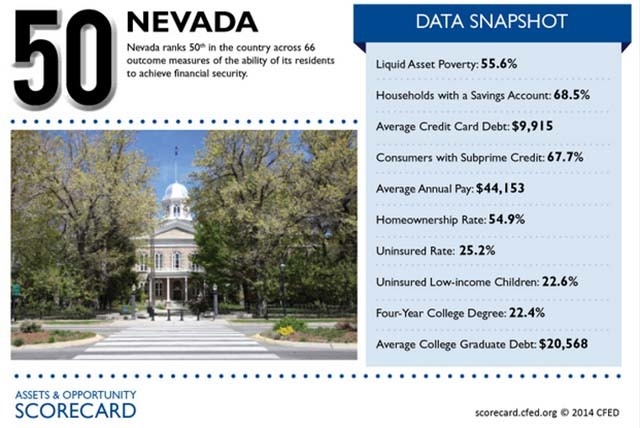 This image from the nonprofit Corporation for Enterprise Development website shows figures for Nevada, which came in at No. 50 out of 51 in the organization's report. (Courtesy, CFED.org)

Five years into the economic recovery, Nevadans’ personal finances have improved slightly but remain among the worst in the country, according to a national report released Thursday.

Some 55.6 percent of households statewide are “in a persistent state of financial insecurity,” with little or no savings to cover basic expenses in an emergency such as a job loss or health crisis, according to the nonprofit Corporation for Enterprise Development.

A family of four would need $5,887 in savings to meet basic needs for three months, but “growing numbers of middle class households … fall short of that amount,” the advocacy group for lower-income Americans said.

The Washington, D.C.-based nonprofit group ranked Nevada 50th out of all states and the District of Columbia for its residents’ financial security. Vermont was No. 1. Mississippi ranked 51st.

Stephen Brown, director of the Center for Business and Economic Research at the University of Nevada, Las Vegas, wasn’t surprised by the lack of financial security.

“That’s the kind of businesses we have right now,” Brown said. “We have some natural diversification, but we need to develop those additional industries. That would put workers in a better financial position.”

Brown said it “might not be the same worker we have now, but it could be the children of the workers we have now.”

It’s only slightly better in terms of state policies to improve financial security. The group ranked Nevada 34th in the country for adopting legislation that could boost people’s finances, health care and education.

Last year, the same group ranked Nevada worst in the country for financial security, arguing that most Silver State residents were living “on the edge of financial disaster,” with 62.5 percent of households with less than three months savings.

“Residents in Nevada have been placed in the position of prioritizing today’s expenses over the most basis of future goals,” said Michelle Johnson, president and CEO of the Financial Guidance Center in Henderson.

The group analyzed five main categories for its 2014 “Assets & Opportunity Scorecard.” Overall, it gave Nevada an “F” in financial assets and income, a “D” in businesses and jobs, an “F” in housing and home ownership, a “D” in health care and a “D” in education.

Johnson said even with the slight improvement in Nevada’s housing market and overall economy, “the fact that more than half of Nevada’s residents exist in a tenuous financial situation is unacceptable.”

According to the data used to compile the rankings, Nevada bankruptcy rates are among the highest in the nation, at 6.2 per 1,000 population compared with a national average of 3.7. Other data that stands out includes above-average delinquent home loans (4.2 percent) and uninsured residents (25.2 percent).

But the Silver State wasn’t near the bottom of every category. Nevada has the eighth-highest rate of employers offering health insurance (56 percent) and the lowest rate of college graduates carrying debt (41 percent).

Despite low rates of college debt, Nevada has the nation’s ninth-highest student loan default rate (16.3 percent), the advocacy group found. The report also found that 19 percent of jobs in Nevada are low-wage jobs, and 68 percent of consumers have sub-prime credit.