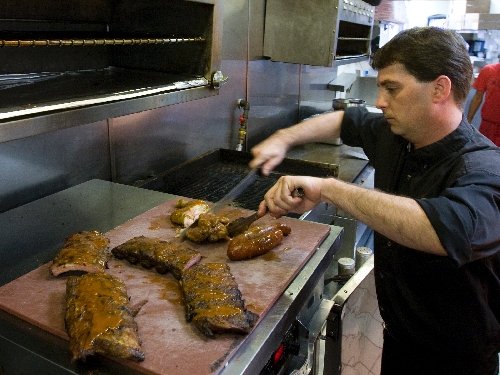 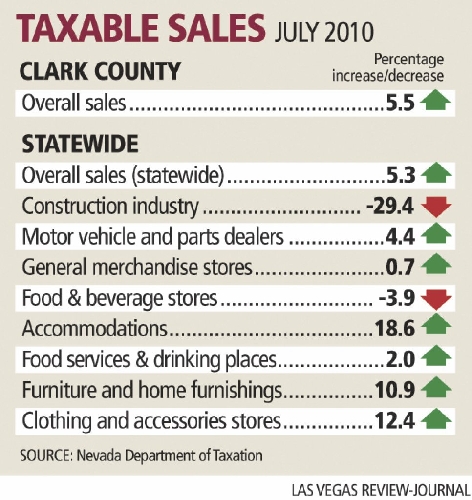 Nevada’s taxable sales posted their best increase in years in July, but local retailers and analysts said it could be years before transactions return to their pre-recession levels.

Sales of goods inside Nevada’s stores and businesses rose 5.3 percent in July to $3.2 billion compared with July 2009, the state Department of Taxation reported Monday. Some of that increase came from an amnesty program encouraging businesses to pay back taxes, and without the program, sales were up 4 percent.

It was the biggest gain in taxable sales since October 2007, when transaction values rose 4.3 percent statewide and 6.5 percent in Clark County.

"The numbers suggest consumers are spending more than they were a year ago, and that’s a positive sign, particularly when you talk about where we’ve been over the last couple of years," said Brian Gordon, a principal in local research and consulting firm Applied Analysis. "Certainly, the figures aren’t off the charts, but moving in a positive territory is a plus for the overall community."

Consumer-oriented spending categories improved their performances year-over-year in July, with clothing retailers adding 12.4 percent to their sales and furniture stores growing their sales by 10.9 percent. Sales among dealers of cars and car parts rose 4.4 percent, while sales inside restaurants and bars ticked up 2 percent.

But local retailers said sales are far from returning to pre-recession activity, and it could take months or years for the market to recover fully. Taxable sales remain well below their December 2006 peak of $4.7 billion.

At The Refinery Celebrity Resale Boutique on Sunset Road, sales rose 5 percent year over year this summer, but they’re down 35 percent from the highs of 10 years ago, owner Carolyn Trepner said. The Refinery still attracts good numbers of Strip vacationers looking to save money on resale clothes from high-end labels including Gucci, Prada and Louis Vuitton, but patrons often don’t want to spend more than $50 at a time.

"People aren’t just coming in and spending. You have to give them deals," Trepner said. "If you reduce something far enough, people will spend money."

Even with sales perking up in recent months, Trepner said she’s not forecasting substantial improvements in her business before the end of the year.

"People have too many things they have to spend their money on: bills, Christmas gifts for family, gas. Their money is only stretching so far, so nothing’s really going to change for us."

What will it take to really turn business around at The Refinery? Unemployment, currently at 14.7 percent locally, will need to drop under 10 percent, Trepner said.

Silva added that sales inside most local restaurants are either holding steady or have fallen slightly from a year ago, and the overall restaurant-sales increase the Department of Taxation reported in July was likely because of new operations rather than increases inside existing eateries. He cited CityCenter, which brought more than 20 restaurants online when it opened in December, as one major restaurant-sales booster.

Silva said he is optimistic that business at Memphis Championship Barbecue will increase as the holidays approach and consumers eat more meals out, but major improvements will have to wait a little longer.

"I think we’ve seen a bottom in this city, and things are starting to get better for everybody, but it’s going to be slow," Silva said. "The old saying was, ‘Las Vegas is the last one into a recession and the first one out.’ This time, we were the first one in, and we’ll be the last one out."

Nevada’s taxable sales won’t repeat their peak performance in the short term and possibly not even in the mid-term, Gordon said. That is because home equity, and not incomes, drove consumer spending in 2006 and 2007 and created "an environment that was unsustainable," he said.

Transaction values have vacillated in recent months, posting a 2 percent gain in April and declines of 1.9 percent and 0.3 percent in May and June. Expect a similar bouncing-around at least through the end of 2010, Gordon said.

Revenue from taxable sales helps fund prisons and schools, among other services.