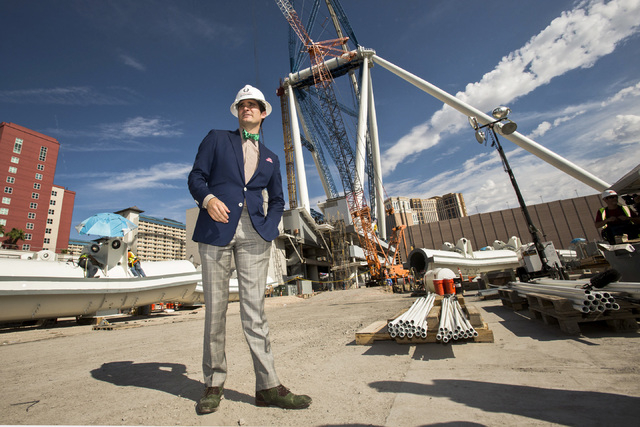 Linq General Manager Jon Gray stands beside the High Roller Observation Wheel at The Linq on Aug. 23. "We are creating an experience that drives people to want to visit us," said Gray. (Jeff Scheid/Las Vegas Review-Journal File Photo)

It took a devastating recession, but marketing and casino executives said Wednesday that consumers ages 21-46 who demand quality dining, shopping and clubs have taken Las Vegas past the perception it’s dominated by casino gambling.

Instead of focusing only on gambling, Las Vegas also promotes other attractions, including day clubs, restaurants, shopping and entertainment, to continue to build its brand in an extremely competitive worldwide gaming market.

“It’s the overall experience that you are trying to create,” said Jon Gray, vice president and general manager of The Linq in Las Vegas. “We are creating an experience that drives people to want to visit us. It’s not ‘build it and they will come’ any more.”

Caesars Entertainment Corp. is building the $550 million Linq project between the Flamingo Las Vegas and The Quad across from Caesars Palace. The new project is anchored by the 550-foot tall High Roller observation wheel.

Joining the list of tenants are Brooklyn Bowl, Sprinkles cupcakes, the largest Yard House in the country, as well as a Polaroid Fotobar retail store and The Stomping Grape wine bar.

Gray said part of building a successful project is getting the balance right with nongaming amenities. He said you have to give consumers something different, while still having those same familiar brands that drive traffic to your property.

“We want Linq to speak to the middle market,” Gray said. “We are changing the Las Vegas landscape.”

Las Vegas welcomed a record 39.7 million visitors last year, approximately a half million more than the previous record of 39.2 million in 2007. Gray said those visitors have changed their spending habits, looking to spend their discretionary dollars on quality nongambling amenities.

Gray joined Joseph Weinberg, president of gaming and resorts with The Cordish Cos., Ben Gordon, principal with Gordon Galloway Advertising, and Mark Dvorchak, managing partner of Pro Forma Advisors LLC, for a panel discussion on nongaming amenities at Global Gaming Expo at the Sands Expo and Convention Center in Las Vegas.

Both Gordon and Weinberg underscored the importance of offering quality food and restaurants in establishing a casino’s brand. Weinberg, whose company developed and operates Maryland Live Casino, said the mix is food, entertainment and then shopping.

“The rooms are important … so is the spa, but if the food is lousy, it trumps everything else in my experience,” said Gordon, whose advertising firm works with Casino Del Sol in Tucson, Ariz.

Weinberg described golf courses as “the most overrated amenity.” He said golf courses don’t “pencil out as amenities” because there are only “so many rounds you can put through” annually.

Dvorchak said for Casino del Sol and other tribal properties golf courses are more an amenity of the hotel than the casino. He said if a golf course does 30,000 rounds per year, it does support the resort’s hotel.

The gaming business has also changed its expectations for nongaming offerings. Today, restaurants, retail or nightclubs, nongaming amenities are expected to be profit centers for Caesars Entertainment and other gaming companies.

“In the past, we were usually loss leaders to bring in the gamblers,” Gray said. “Now we are driving visitation to Las Vegas. A DJ at a club can make $300,000 a night, but the club is making $1.2 million.”

Gray said day clubs and pools are still driving a lot of traffic. He expected their popularity and some room on the Strip for additional clubs to drive their continued growth.