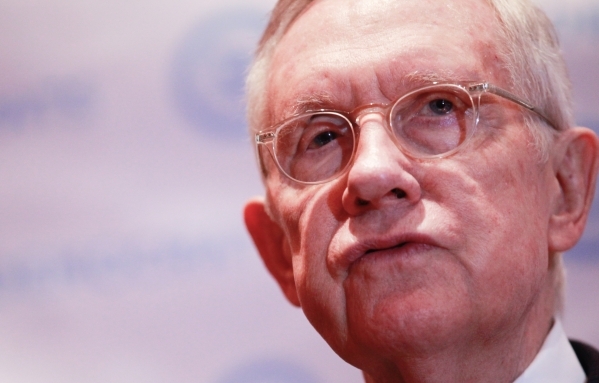 WASHINGTON — Senate Democratic leader Harry Reid pointed to his own state’s record Wednesday when urging support for an amendment that he says would not only help protect consumers who generate their own power from abusive rate increases but also save the rooftop solar industry.

Despite such dramatic claims, it appeared Reid and King’s hopes to attach the amendment to a comprehensive energy bill face a tough go.

Press aides for both senators conceded Wednesday that getting a vote on the amendment remained uncertain but added the senators would continue to work on the issue.

“We should not be pulling the plug on clean energy at a time when more and more Americans are making it work,” Reid said in comments on the Senate floor, which put the veteran senator in an unusual position.

Usually, when members go to the Senate floor to talk about their home states, they praise them and hold them up as examples for others to follow.

As of Jan. 1, rooftop solar customers have been hit with new rates approved by the Nevada Public Utilities Commission.

Reid used his customary blunt language to place the blame squarely on the fossil fuel industry, which he says has attacked the blossoming clean energy industry, not only in Nevada but across the country.

“They have turned loose their minions, their anti-consumer minions,” he said, adding utilities also must share the blame.

Reid singled out the effort in Nevada for making the new rates retroactive.

While also focusing on Nevada, King pointed out utility customers face similar situations in other states.

He said his proposal would protect customers with existing agreements with electric utilities for rooftop solar and other distributed energy resources from unjustified rate hikes or new fees by directing state regulators to consider guaranteeing reasonable rates for the energy they provide for the grid.

“This amendment is really a modest one. It is not a takeover of the regulatory process,” King said.

While describing the King amendment as “well intentioned,” the National Association of Regulatory Utility Commissioners came out against it.

“NARUC’s members are strong believers that regulatory determinations on rates should be based on impartial judgment on the most complete evidentiary record possible, but which are nimble enough to meet a sector that is changing rapidly,” the organization stated in a letter to Reid, Senate Majority Leader Mitch McConnell of Kentucky and the energy bill’s managers, Sen. Lisa Murkowski, R-Alaska, and Sen. Maria Cantwell, D-Wash.

“The practical implications of the amendment to state utility commissions would weigh down commissions and prevent them from this nimbleness.”

As an example, the letter pointed to wording within King’s proposal that would turn nearly every rate case into a net-metering proceeding.

“This is simply unworkable,” the letter stated.