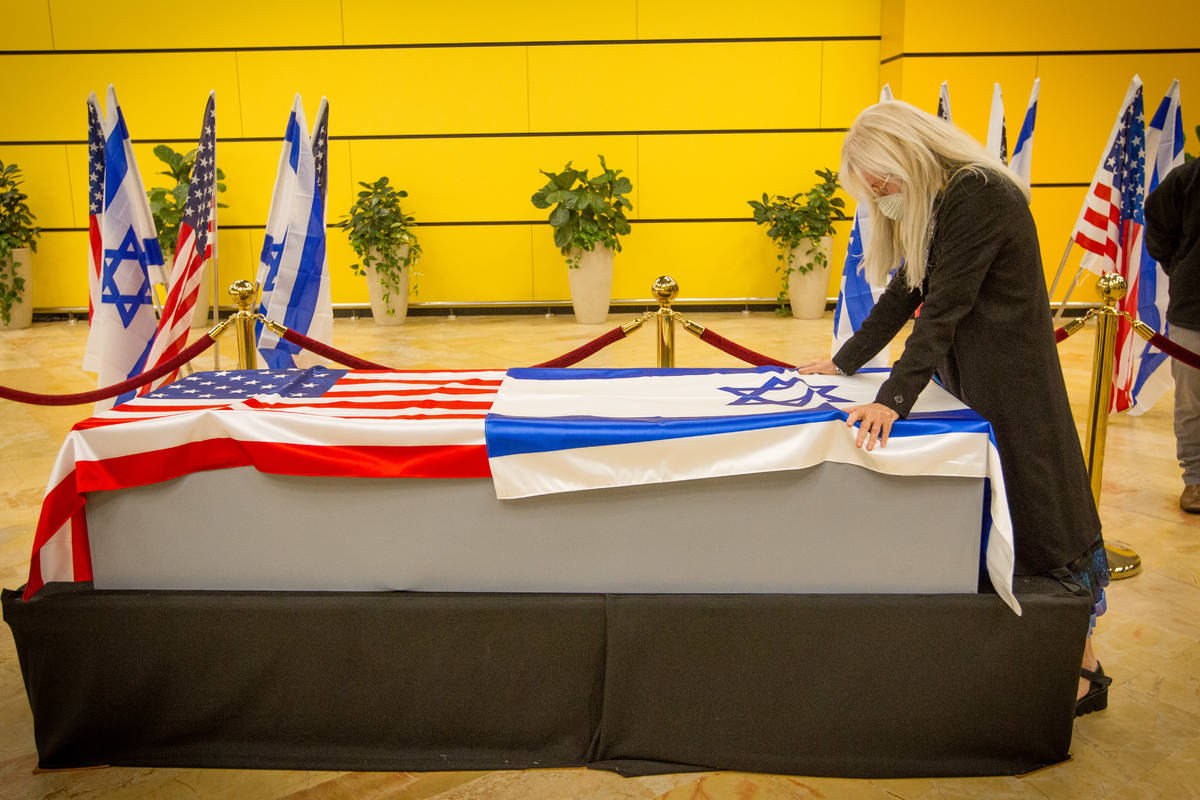 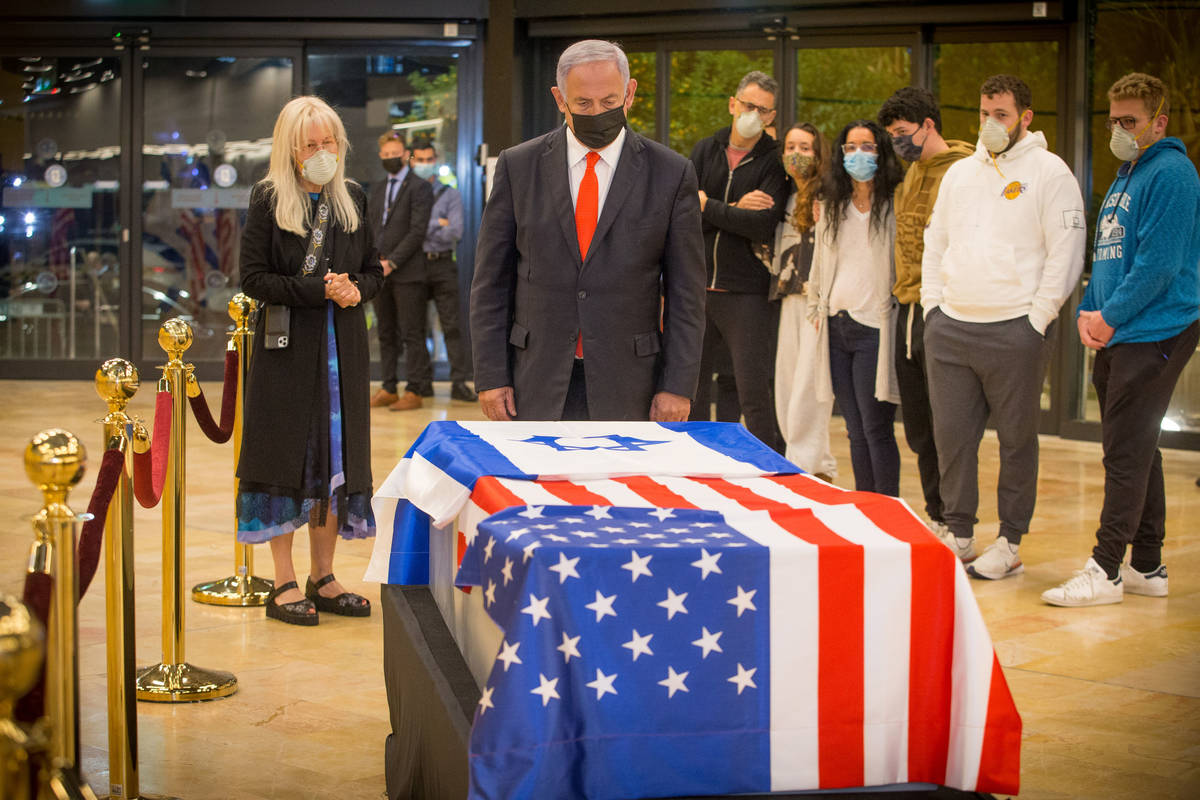 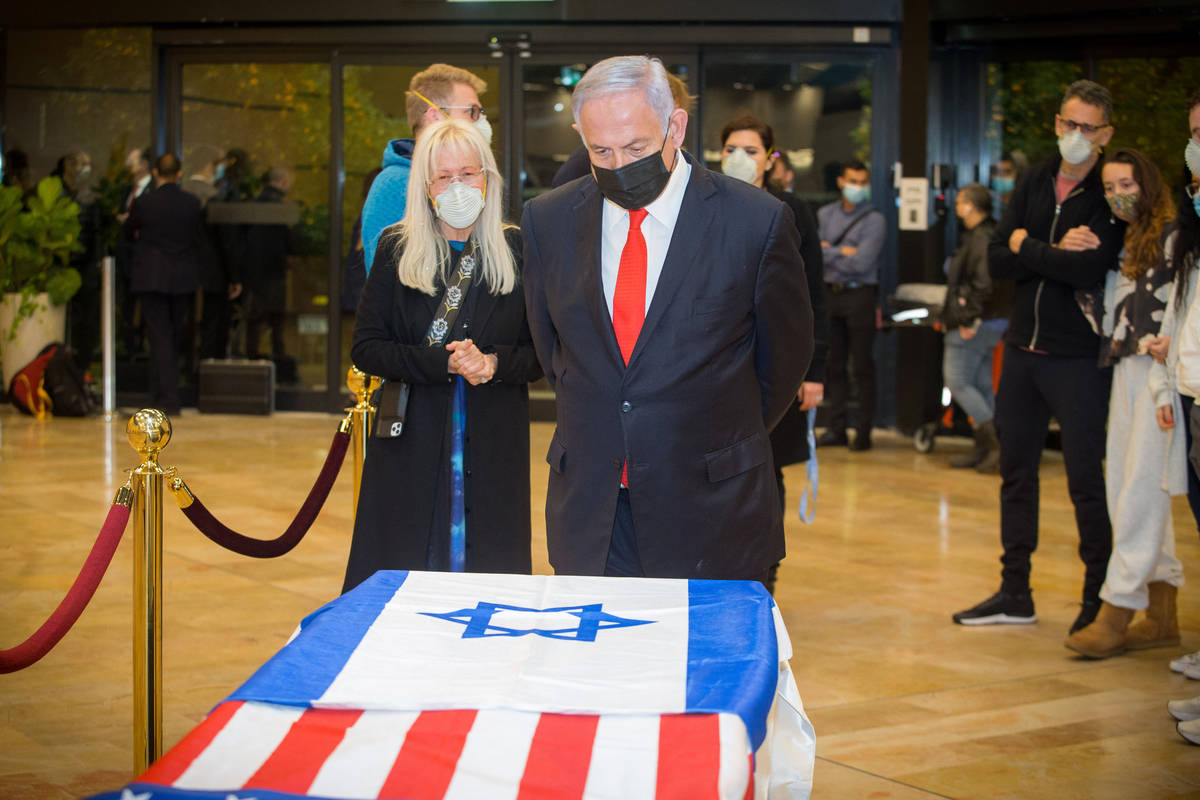 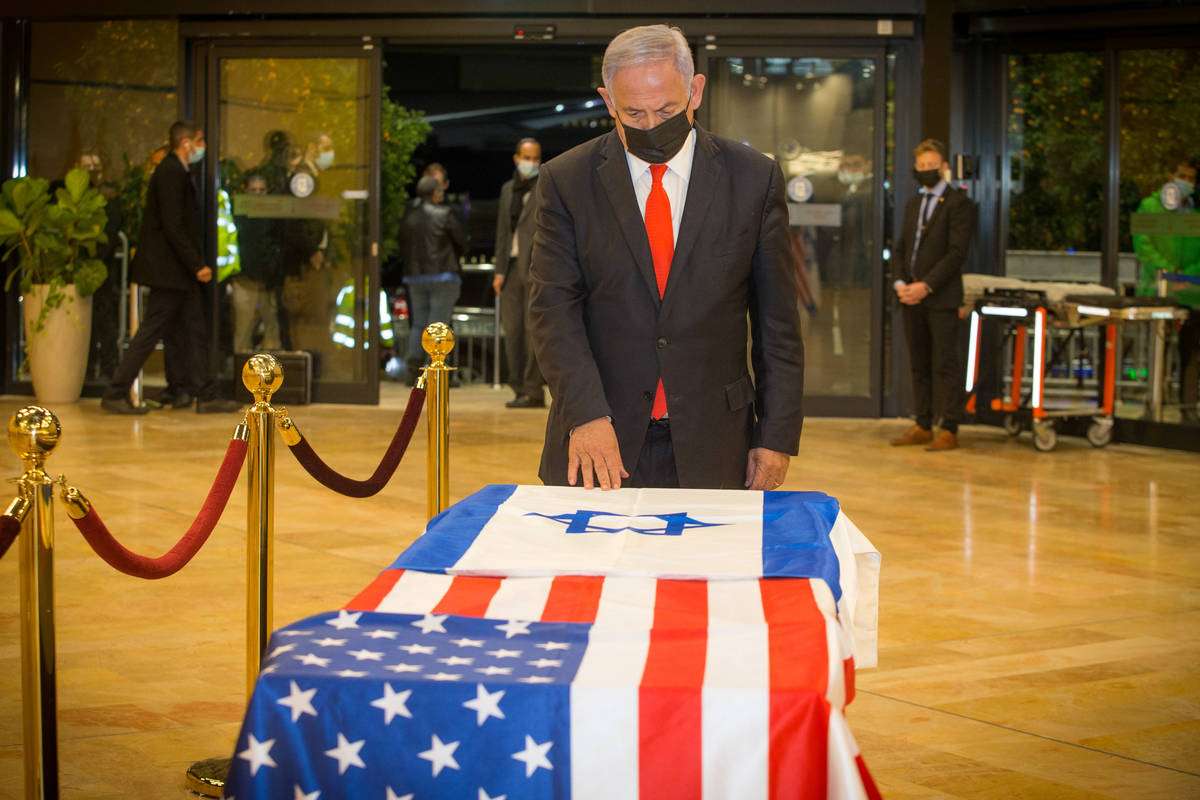 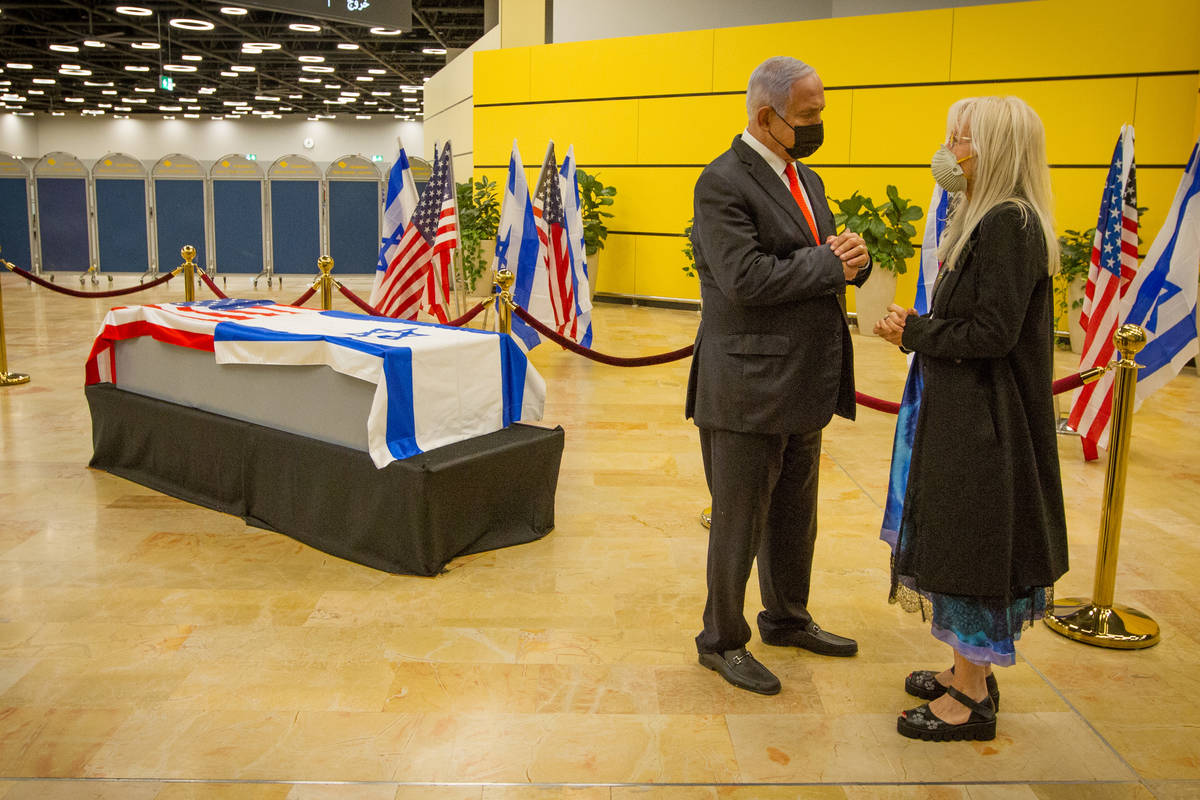 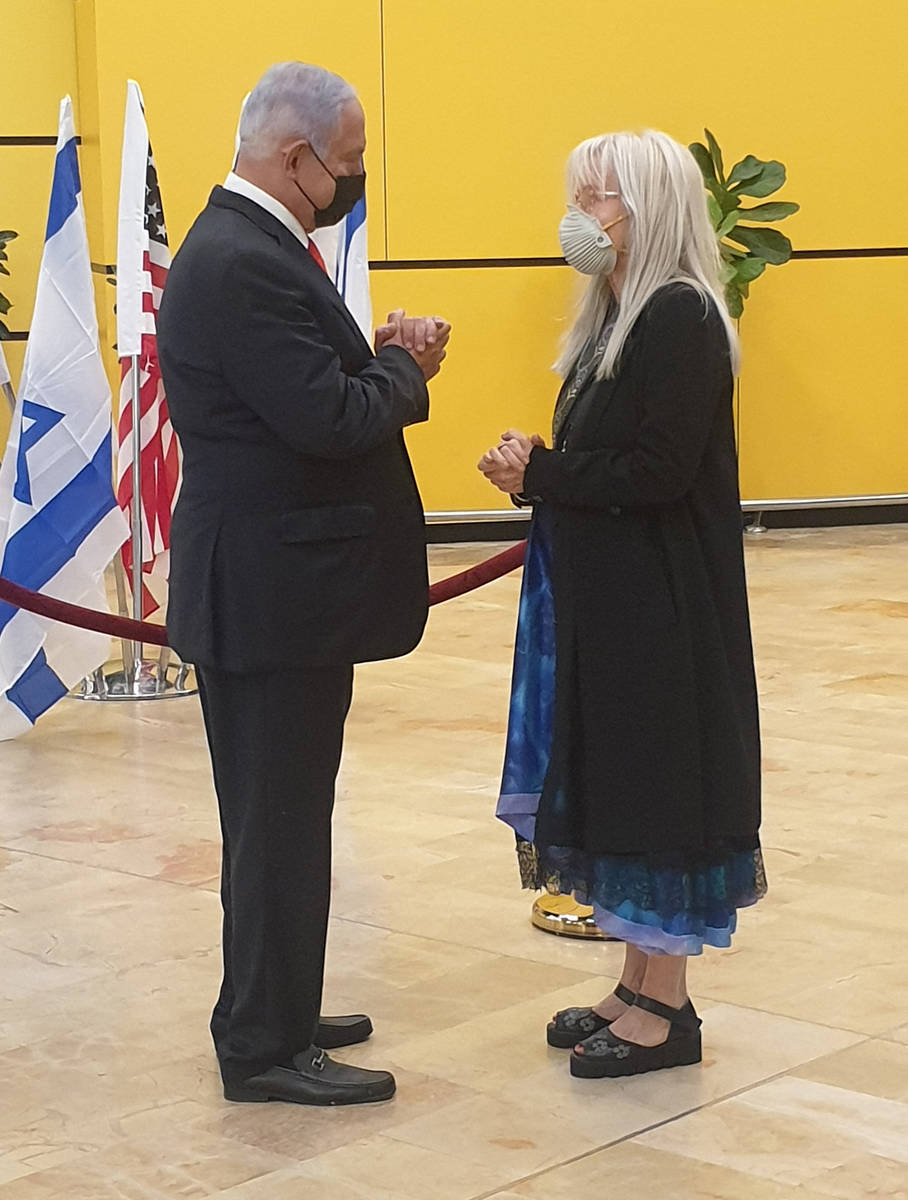 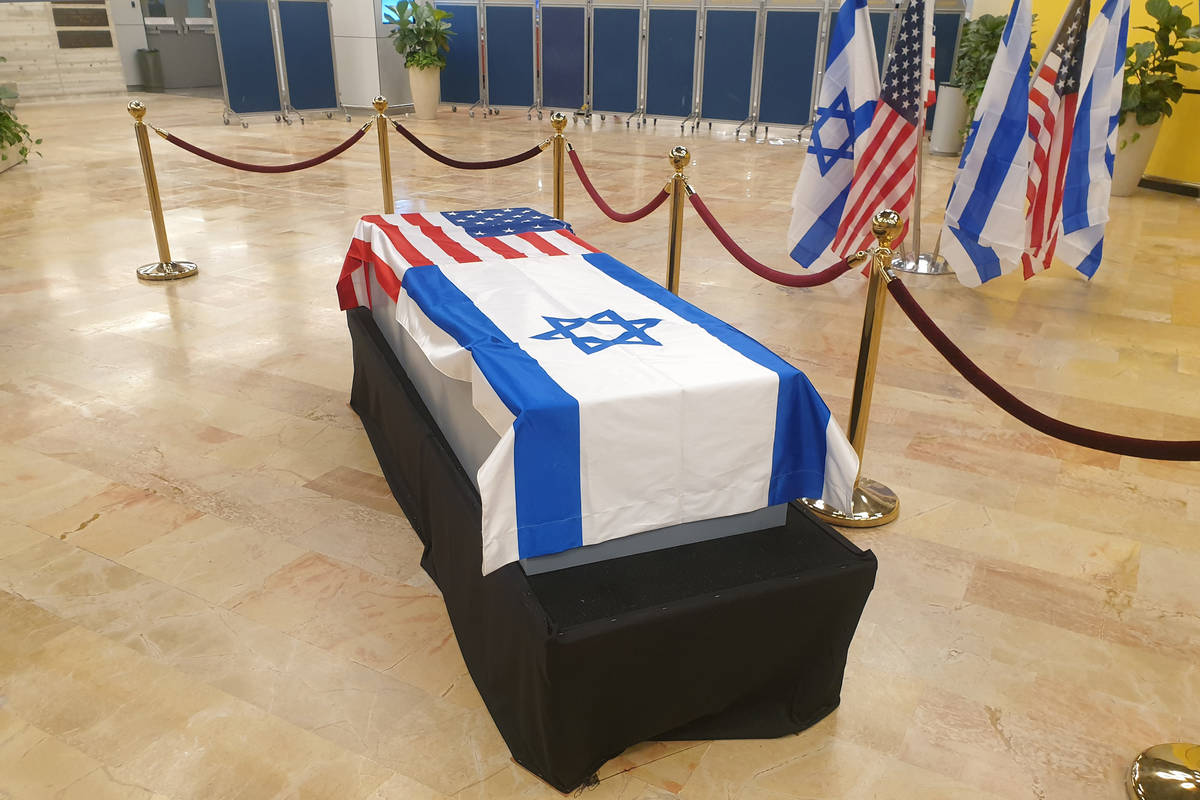 Sheldon Adelson’s casket arrived Thursday in Israel, where the late Las Vegas tourism pioneer and philanthropist will be buried Friday.

The CEO and chairman of resort operator Las Vegas Sands Corp. died Monday at age 87 from complications related to treatment for non-Hodgkin’s lymphoma.

Born in Boston in 1933, Adelson had strong ties to Israel, the birthplace of his widow, Dr. Miriam Adelson.

The Adelson family and the casket arrived at Ben Gurion International Airport in Tel Aviv, where they were met by Israeli Prime Minister Benjamin Netanyahu.

Netanyahu spoke with Miriam Adelson and her family. Asked how future generations would remember Sheldon Adelson, Netanyahu said, “As a giant and a Jewish patriot. His death is a great loss to the Jewish people.”

Adelson’s casket was put in repose briefly at the airport so Netanyahu could pay his respects for several minutes. The short event had no speeches.

Adelson will be buried in Jerusalem on Friday in a private ceremony. Plans for a memorial service in Las Vegas will be announced at a later date.

“We are now in the country Sheldon loved so much,” Miriam Adelson said in a statement. “It is just hard to believe that he will no longer get to see it in his own eyes. This time he has come for his final resting place, not in order to search for a way to help and contribute. This is a feeling of great emptiness and loss, but also a sense of comfort, knowing that he is no longer suffering and that he will soon lie in the Mount of Olives, in Zion, next to some of the greatest people of our nation.”

The Adelsons supported many Jewish and Israeli causes over the years.

In 2006, the Adelsons donated $25 million to Yad Vashem, the Holocaust shrine in Israel, marking the largest private donation in its history. The following year, the couple established the Adelson Family Foundation to “strengthen the State of Israel and the Jewish people,” according to its website. It gave more than $400 million to Birthright Israel, which finances free educational visits to Israel for Jewish teens and young adults. The foundation is believed to be the largest of all donors to Jewish and Israeli causes, giving about $200 million annually.

The couple launched Israel Hayom, the most-read daily newspaper in Israel, in 2007.

The Adelsons have been steadfast supporters of Netanyahu, and they were strong advocates for U.S. recognition of Jerusalem as Israel’s capital and for moving the U.S. Embassy from Tel Aviv to Jerusalem. Both happened under President Donald Trump, and the Adelsons were present when the new U.S. Embassy opened in 2018.