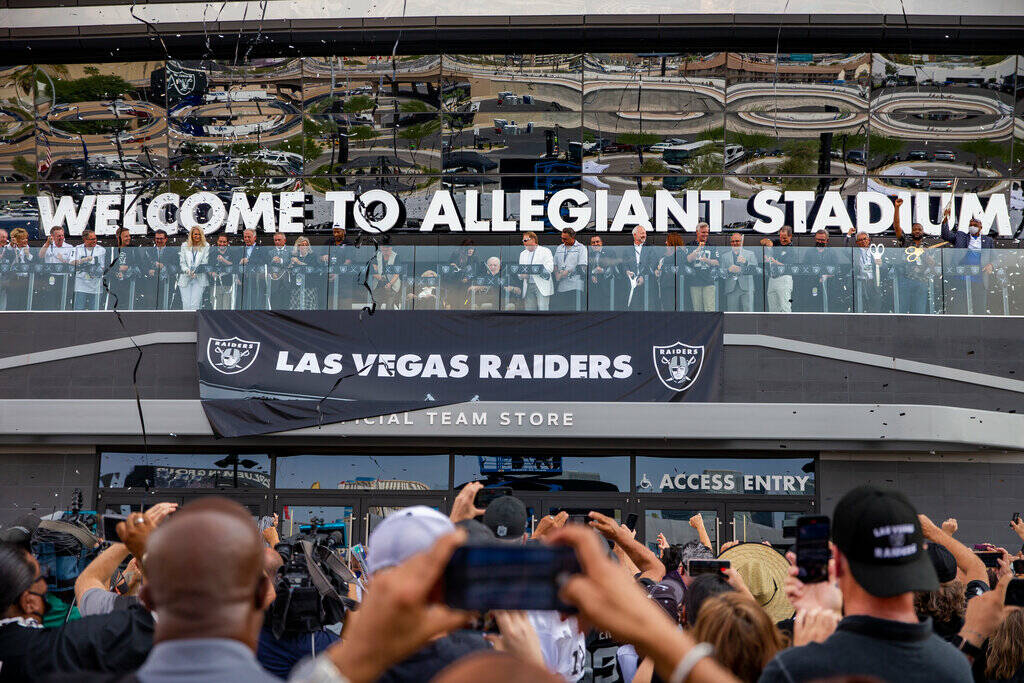 Allegiant Stadium welcomed nearly 1.3 million guests in its first nine months of operations with fans allowed inside the $2 billion facility.

The stadium’s success has helped make sports the No. 2 reason why tourists visit Las Vegas, according to Steve Hill, the chairman of the Las Vegas Stadium Authority. The authority board was presented a report Thursday on how the stadium was utilized in its first year in operation with attendees permitted inside.

“What’s really outpacing our original model is the number of tourists and the number of people who are coming (to Las Vegas) for an event at the stadium,” Hill said. “Total attendance is somewhat better than we expected, particularly for the environment that we’re in right now.”

Hill, who also serves at president and CEO of the Las Vegas Convention and Visitors Authority, said officials had projected that people coming to Las Vegas for an event would account for about 27 percent of attendees at the stadium. But he said “the information that the Raiders are seeing is close to twice that amount. That’s what’s really overperforming and making a difference.”

Raiders games have led the way in attendance with 547,026 fans during the 2021-22 NFL season. Other ticketed events, outside of concerts or UNLV games, drew 326,268 fans, according to Las Vegas Stadium Authority data through March 31. Concerts drew 249,111 people through March, and UNLV games drew 93,652 fans.

Private events proved to be popular as well with 58,256 people attending those non-ticketed gatherings.

“Because capacity there matters pretty significantly,” Hill said. “We just didn’t have a venue that could handle events of that size.”

The second show with fans in the stadium’s history, a concert by Garth Brooks, is the top attended event thus far with 63,000 fans. The Raiders’ playoff-clinching win over the Los Angeles Chargers in January is second with 58,871. The home regular-season opener against the Baltimore Ravens saw 57,000 fans. The CONCACAF Gold Cup soccer match drew 55,000, and the Kansas City Chiefs’ first game in front of fans in Las Vegas had 54,928 attendees.

Events occurring in the second quarter of this year are primed to shoot the attendance total even higher, with four sold-out BTS shows in April and several high-profile soccer matches, including Barcelona vs. Real Madrid in June.

“The soccer matches that we had last month, between them we had 150,000 people in those three events,” Hill said.

Not only was the stadium a huge hit in drawing fans, but it was equally as impressive from the experience standpoint.

Allegiant Stadium was named the top NFL stadium for game day satisfaction by a “Voice of the Fan” survey conducted by the league. The Clark County Commission this week recognized the Raiders and other community stakeholders involved in stadium operations for the accolade.

“The fact that we were given the Voice of the Fan designation in our first operating year at the stadium is just a tremendous honor,” said Raiders President Sandra Douglass Morgan, who was among those at the board meeting Tuesday.

2
Confusion reigns over date of Las Vegas Bowl at Allegiant