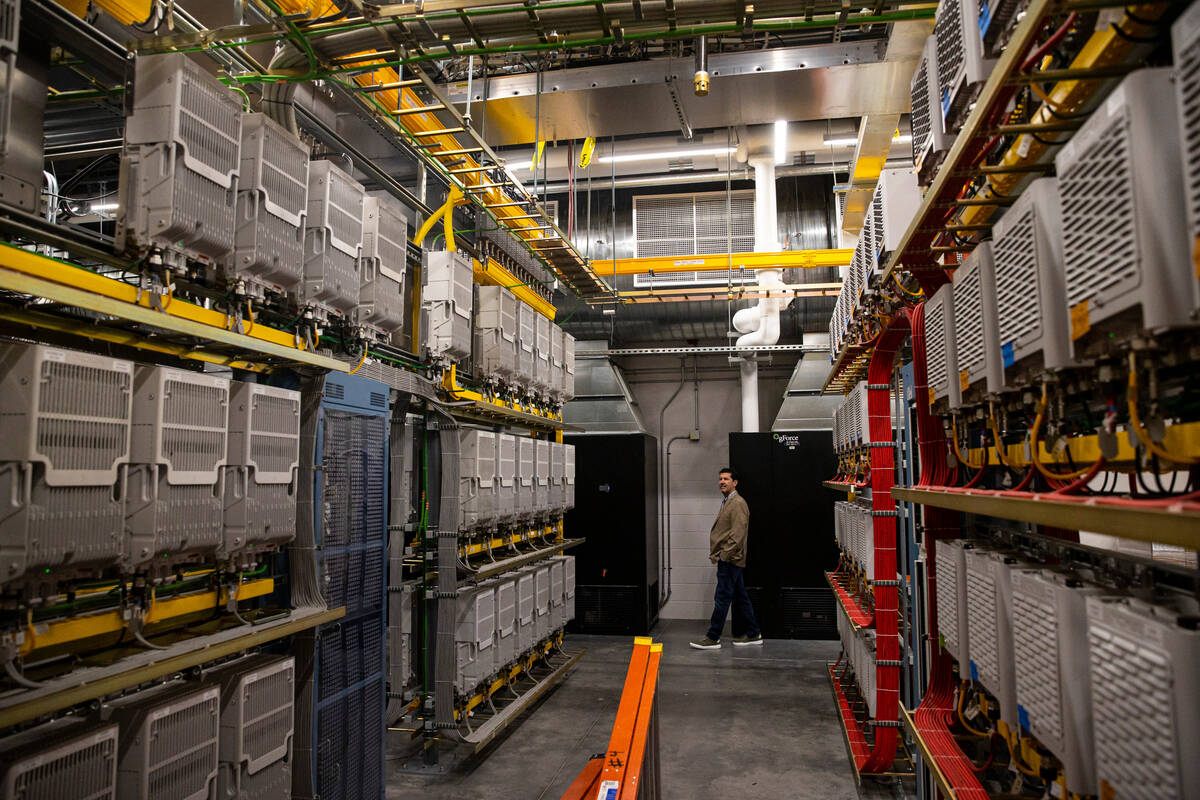 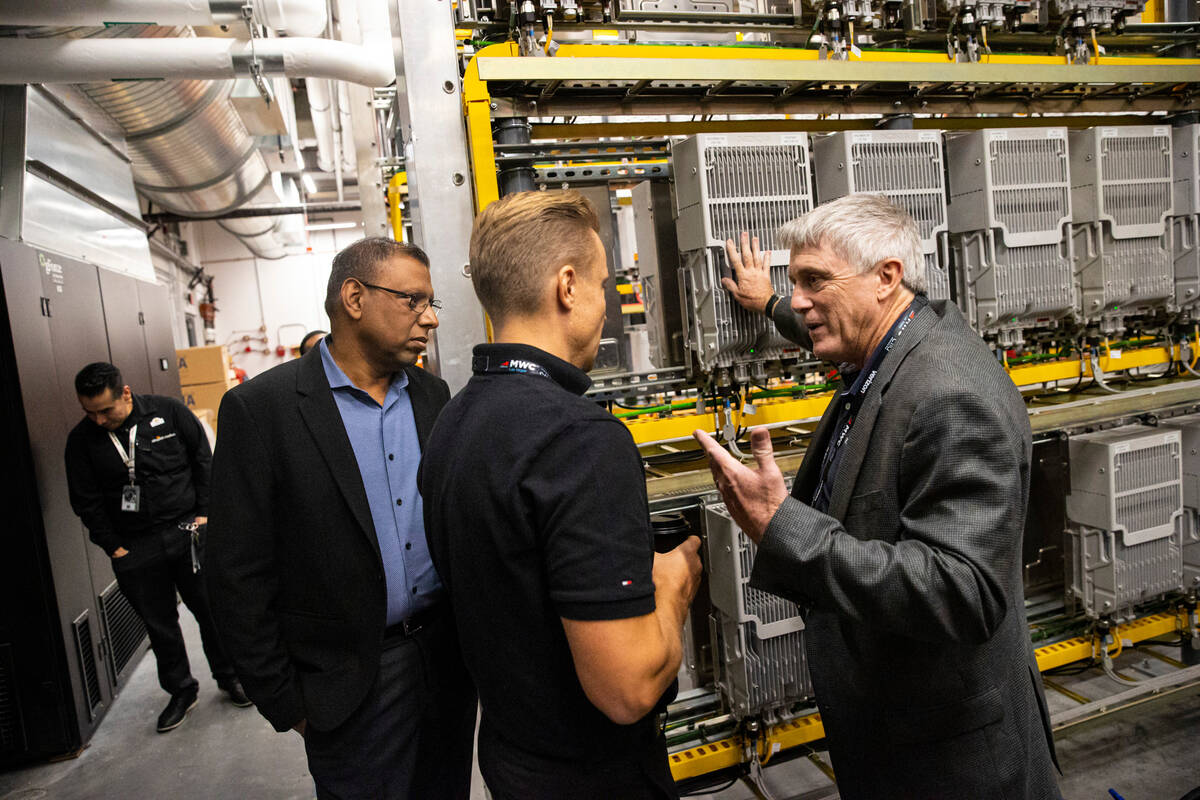 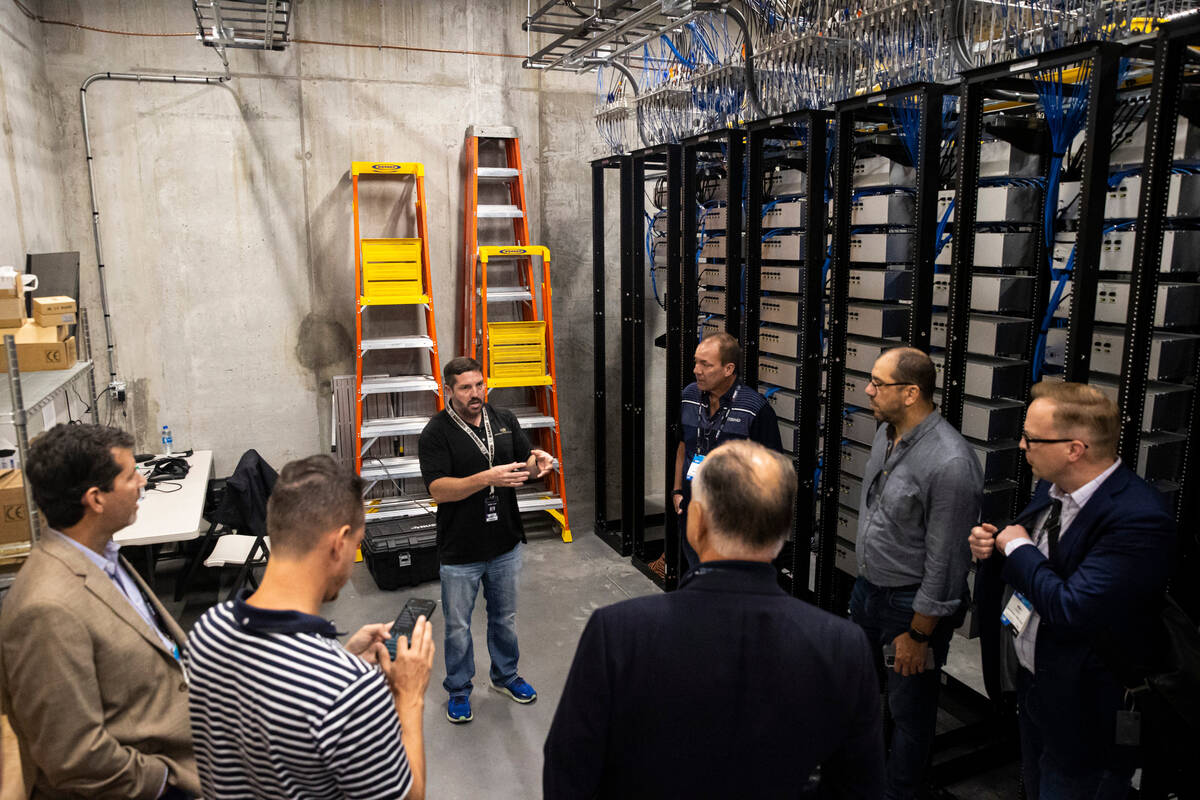 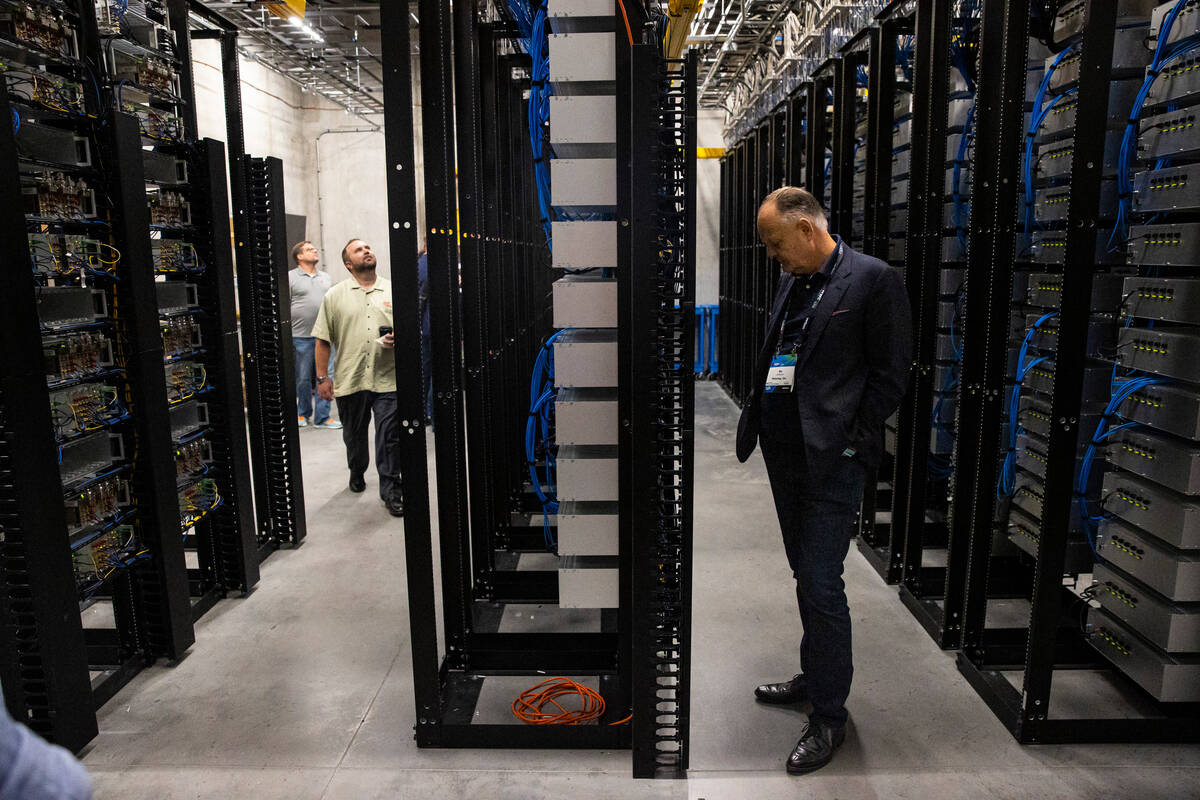 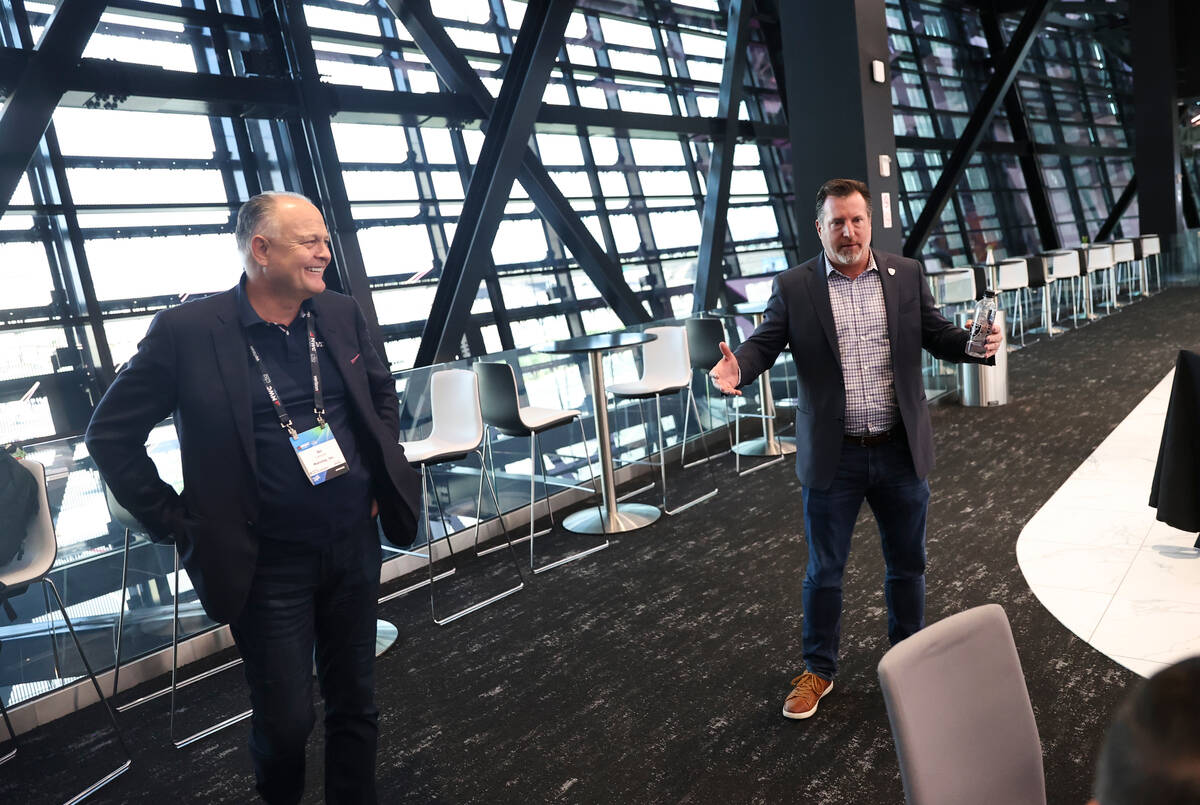 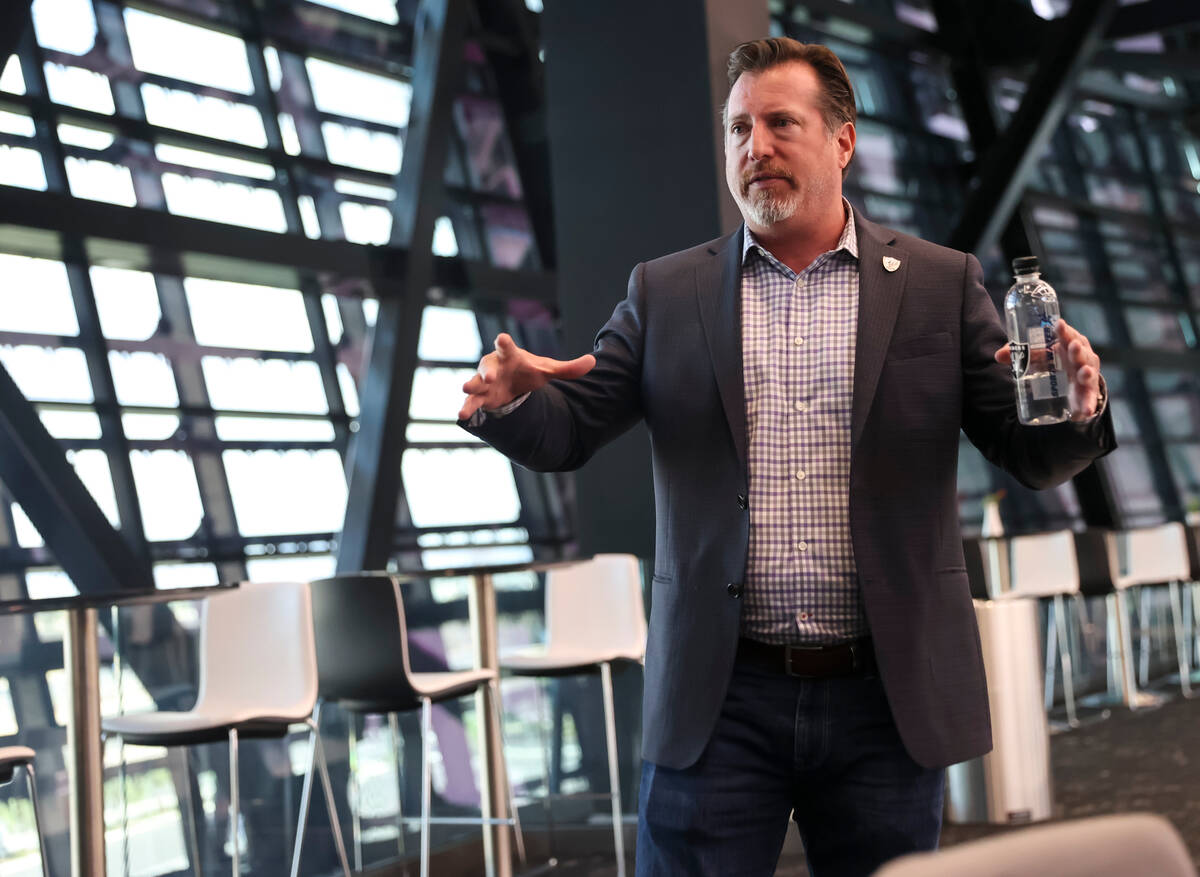 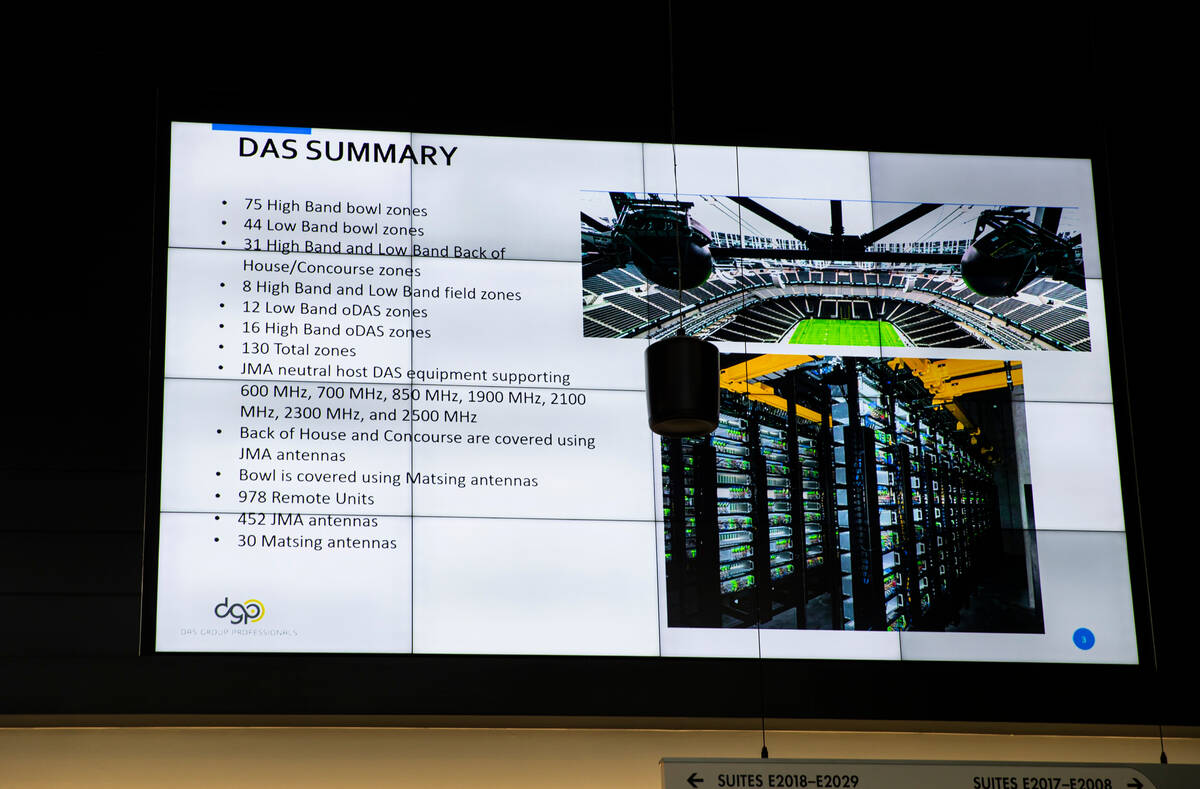 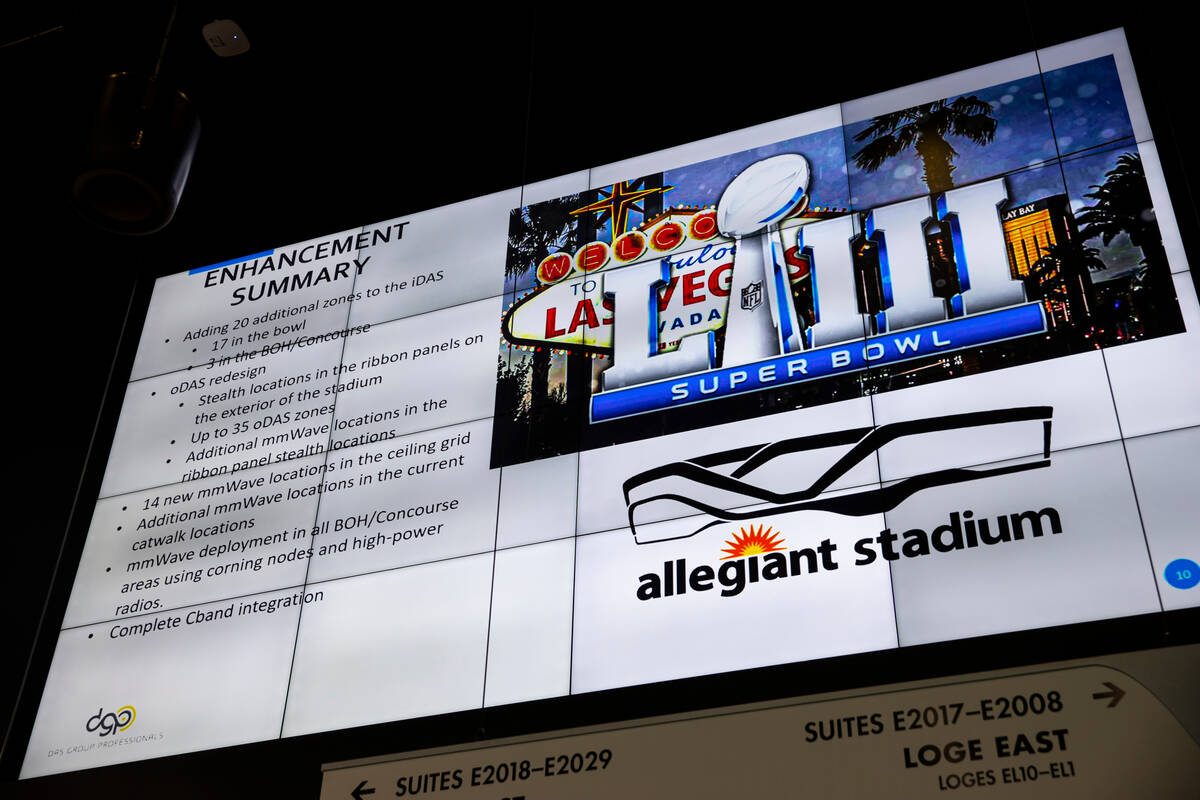 A slide displays information about the wireless network enhancements that will be made ahead of Super Bowl LVIII before a tour of Allegiant Stadium with lens antenna technology company MatSing on Thursday, Sept. 29, 2022, in Las Vegas. (Chase Stevens/Las Vegas Review-Journal) @csstevensphoto 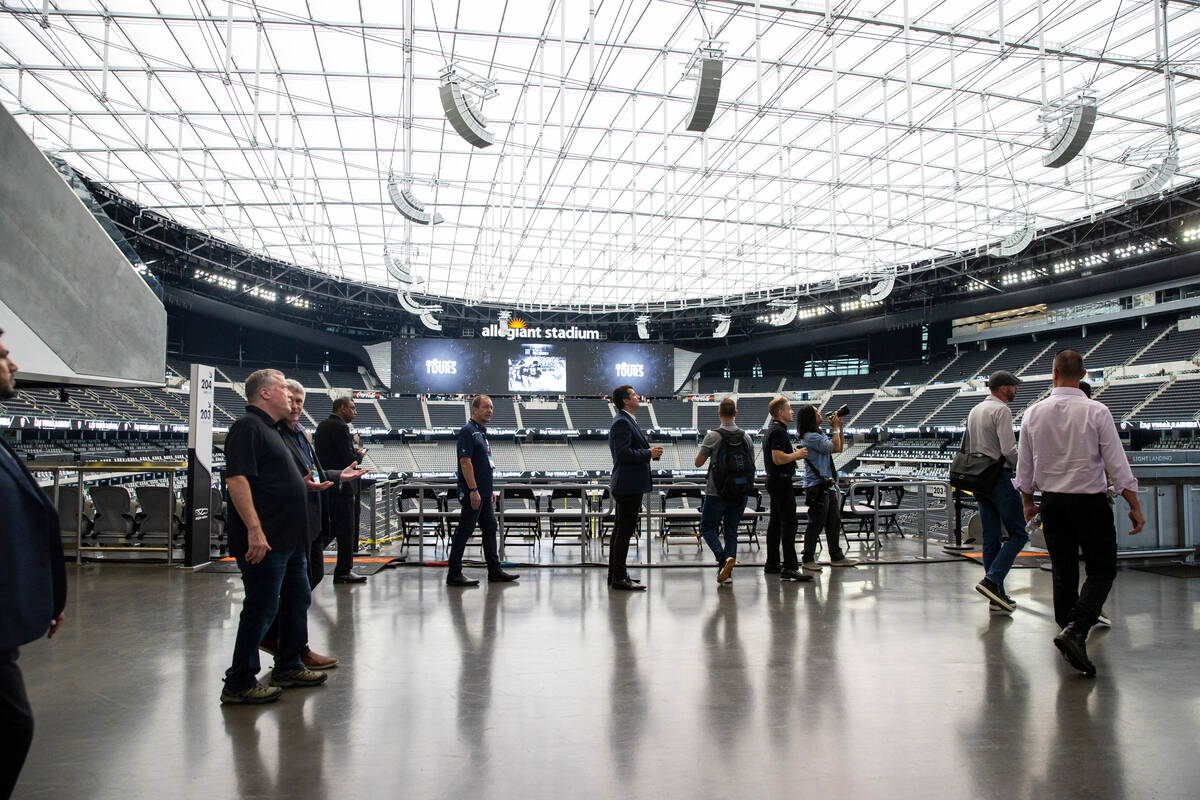 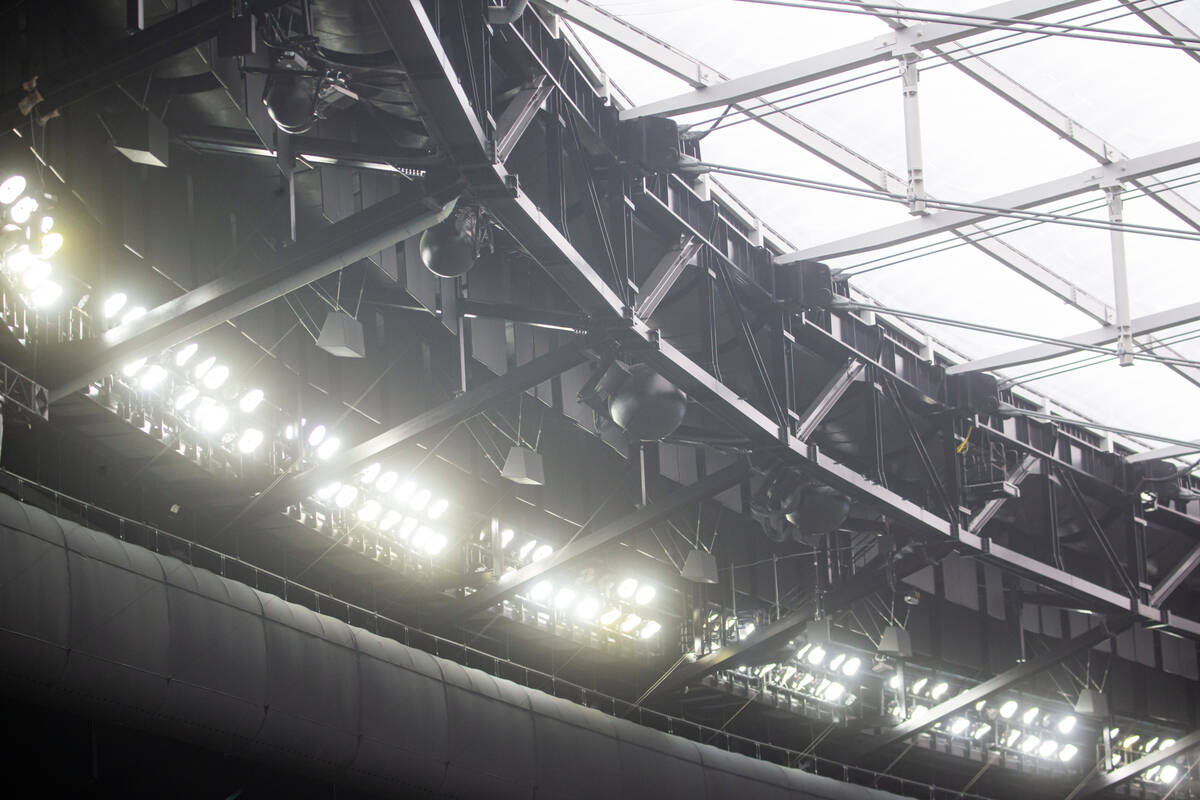 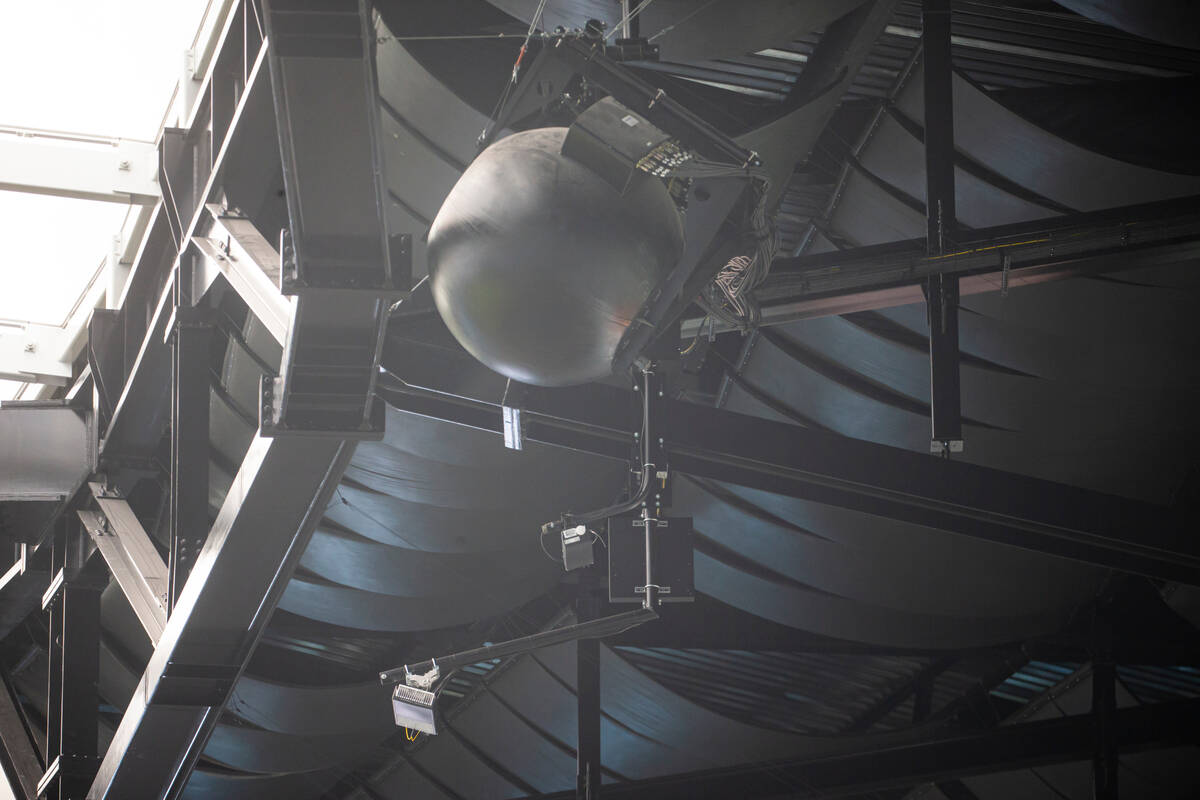 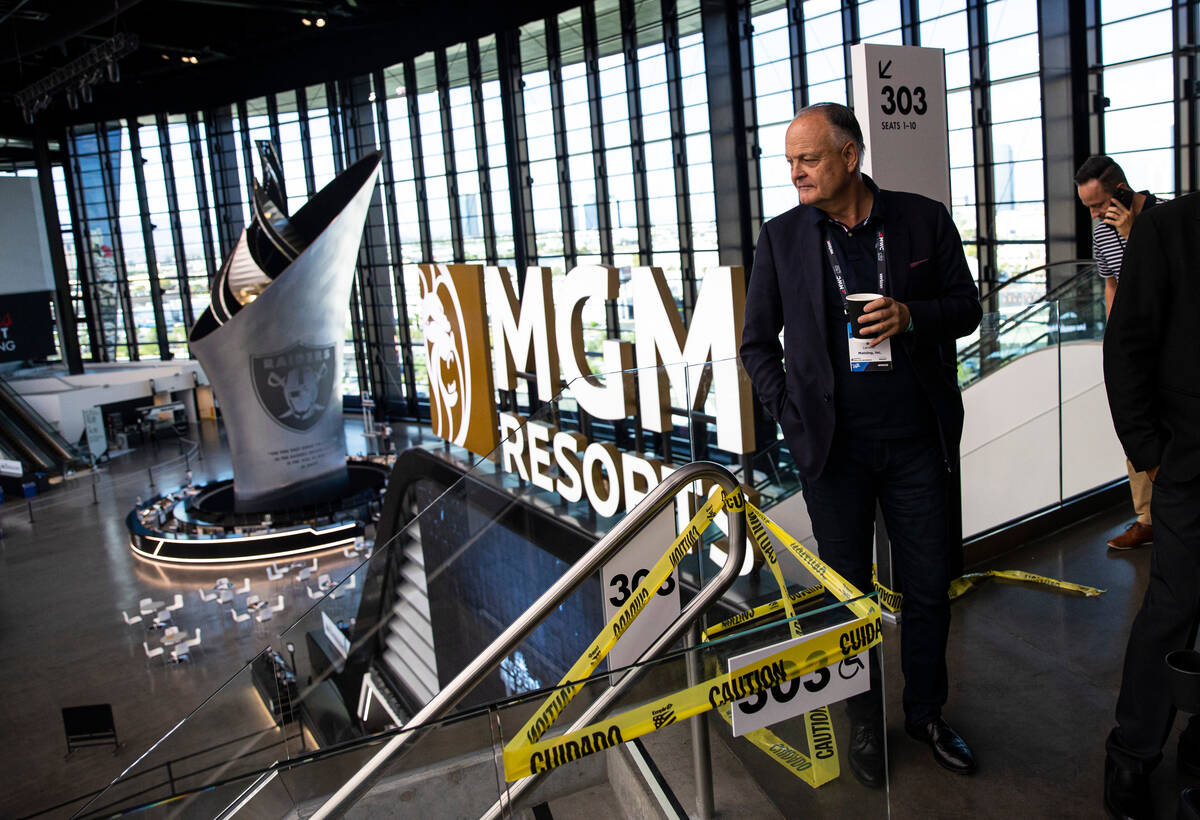 Thirty ball-shaped MatSing lens antennas installed in the rafters of the $2 billion facility provide the mobile capacity coverage for Allegiant Stadium’s bowl. This is in contrast to square or rectangular antennas installed underneath seats at other stadiums.

“We had to get it right, how to service 65,000 fans in a bowl of a stadium and we didn’t want to go under seats,” said Matt Pasco, vice president of information technology for the Raiders. “We had some MatSing balls in the original design to cover the field and our large plaza (Coors Light Landing) here on the north.”

MatSing’s products came into popularity in 2014 after the company helped solve the mobile connectivity issues at music festival Coachella.

After hearing about an arena in Tampa that planned a full deployment of MatSing antennas, Pasco believed that was the direction the Raiders should take with the 1.8 million square foot Allegiant Stadium.

“If they could do it at that scale, could we do it at our scale?” Pasco said. “We ran some models and it looked like not only could we do it, we could provide better coverage and be more cost effective.”

The spherical antennas provided 4G and 5G broadband cellular coverage to over 468,000 people in 2021 during the first few months that fans were allowed to attend events at the two-year old stadium. The MatSing antennas are part of the larger system that includes JMA antennas in the concourse and back-of-house areas and 62 telco racks of T-Mobile, AT&T and Verizon telcom servers.

MatSing’s lens antennas work like the lens of an eyeball using refraction and not reflection.

“Now with phones getting more complicated, more capacity is needed and single-sector (antenna) simply doesn’t cut it,” said Leo Matytsine, executive vice president of MatSing. “Your eye can receive light from any direction and focus on your retina. Same here with this approach… We can create one antenna which can create many different beams, or sectors, independently with high isolation, high performance and no shared parts.”

The antennas support a variety of mobile devices by staying up to date with new technology, with each one able to split rays into multiple zones for better coverage. They increase the number of spectrums to allow more devices to connect to network providers without overloading the system. The increased connectivity allows for fans to share game play in real time.

“You have very high capacity and create many different sectors… and you utilize less locations with less antennas,” Matytsine said.

Coverage is provided to fans throughout the stadium’s seating areas, the field, the Modelo Tailgate Zone and even a singular one providing coverage to Lot J, where the main tailgating space outside the stadium is located.

“One MatSing antenna (is) in the parking lot and it creates many different sectors and all of a sudden your capacity for tailgating is good,” Matytsine said.

Stadium officials are adding 20 additional zones to the stadium for the Super Bowl, to ensure fans will stay connected during the big game.

Antennas are being added to “stealth” areas around the stadium’s exterior, and additional millimeter radios are being installed throughout the interior to give a boost inside the stadium.

“If you look in between the speakers, that’s where those are going to go,” said Patrick Pesnell, director of engineering for DAS Group, an outside contractor that helps with telecommunications at the stadium.

Crews will also do a full integration of C-band spectrum, or radio frequencies between 4 and 8GHz, which are ideal airwaves for 5G service.

“We’re going to add 16 additional MatSing antennas that are C-band only,” said Pesnell. “That’s all in the works and that will be running across the area very soon.”

The C-band spectrum will be instrumental in increasing the cellular connectivity for the Modelo Tailgate Zone and the Hacienda Avenue bridge, which carries throngs of fans to and from the stadium for games and large events. More MatSing antennas will be added in the north end of the stadium to provide more coverage.

“Slightly higher frequency, so you should get better frequency of speeds,” Matytsine said. “You need an antenna to create those many sectors… because our lenses are broadband they cover everything up to 6GHz. So you can have your low-band, mid-band and C-band all in one antenna.”