Proponents of luring the Oakland Raiders to Las Vegas to a planned $1.9 billion, 65,000-seat domed football stadium take on a new challenge with a familiar strategy beginning this week.

Instead of working to convince 63 Nevada lawmakers of the benefits of a stadium as they did last week, development team leaders will have to convince at least 24 of 32 National Football League team owners of why Las Vegas is worthy of becoming home to an NFL team.

And, while representatives of the family of Sheldon Adelson and a small army of lobbyists did most of the work to convince two-thirds of the state’s legislators to vote their way, the Raiders and their owner, Mark Davis, will lead the effort to persuade the NFL owners.

Davis and his executives begin the effort Tuesday when NFL owners begin two days of meetings in Houston. Relocation of the team isn’t on the agenda of the who league’s fall meetings, but Davis plans to introduce some details of the proposal in advance of January’s winter meetings when a relocation decision is expected to be reached.

“The timing was perfect,” said Andy Abboud, vice president of government relations and community development for Las Vegas Sands and a spokesman for the Adelson family on stadium matters. If the Legislature hadn’t approved the stadium financing plan this past week, or if it had punted the decision to the Clark County Commission, then the developers would have missed next week’s presentation to the NFL owners.

“The rest of the work is the Raiders and the NFL,” Abboud said. “Our role sort of diminishes, but now we have a lot of work to do in terms of starting to construct this thing and a lot of planning work needs to be done.”

But before a shovel can be put in the ground, several other actions must occur.

A stadium authority board must be formed. That got slightly more complicated last week, thanks to an amendment that was included in the legislation approved Friday. Instead of seven members to be appointed, it’s now nine with three appointed by the governor, three by the Clark County Commission, one by the UNLV president and two more representing the public selected by those first seven. They’ll serve staggered terms.

“It’s really important that these appointees aren’t a political favor, but are qualified people with some form of experience in stadium development and management,” said Clark County Commissioner Steve Sisolak.

According to the legislation, appointments must be made within 30 days of the enactment of the bill with the first meeting within 75 days. That means the board would have its first meeting just before the NFL’s winter meetings when a relocation vote could occur.

A site must be finalized. The development team is responsible for acquiring the site and there are two in play, the Bali Hai Golf Club land on Las Vegas Boulevard and 62 acres between Russell Road and Hacienda Avenue between Polaris Avenue and Dean Martin Drive. It’s just west of Interstate 15 and the Mandalay Bay resort.

Because officials with Southwest Airlines and McCarran International Airport have discouraged the Bali Hai site, the Russell Road location is viewed as the better option.

The land, with a listed value of $40 million, is owned by a consortium of banks that foreclosed on the property in 2009. The Raiders, which have an option to buy, have not indicated the purchase price or when they would close on the deal.

While the development team will make recommendations, the ultimate site selection decision rests with the board.

Room taxes will increase. The legislation approved Friday increases Clark County’s hotel room tax to help finance the stadium and improvements to the Las Vegas Convention Center. Under the plan, the Adelson family will contribute $650 million toward the stadium project, the Raiders will kick in $500 million and the remaining $750 million will be funded by bonds backed by the room tax increase.

Clark County officials will begin collecting the higher room tax in January. Currently, most properties collect a 12 percent tax on rooms. Beginning Jan. 1, the rate will climb to 13.38 percent for most properties within a 25-mile radius of the Clark County Government Center. That amounts to about a $1.38 difference in the tax paid on a $100 hotel room.

If the Raiders don’t move to Southern Nevada, the legislation allows a lower room tax increase to generate $300 million toward the construction of a smaller stadium for UNLV, provided the university can raise $200 million in private donations within two years.

Developers will design and build the stadium. Based on timelines that were outlined by officials with Las Vegas Sands, Majestic Realty and the Raiders before the Southern Nevada Tourism Infrastructure Committee over the past eight months, most of 2017 will be devoted to design, engineering and site preparation. The developers said they hoped to begin construction by late 2017 with completion in time for the 2020 NFL season. That’s roughly a 2½-year construction period.

Majestic Realty has since dropped out of the development team.

While stadium proponents are gung-ho about bringing the team to Las Vegas, outside circumstances could derail those plans.

If voters in San Diego approve a measure to increase hotel room taxes there by 4 percentage points to build a new stadium for the San Diego Chargers, the team would likely stay there. That would open the door for a team to join the Rams in Los Angeles and the Raiders could be courted.

An August poll by the San Diego Union-Tribune and News10 indicated that support for the tax increase was waning in a vote that would require a two-thirds majority.

In addition, NFL Commissioner Roger Goodell generally opposes teams relocating, and, in the Raiders’ case, this would be the team’s second departure from Oakland in 38 years.

An NFL spokesman had no comment about Friday’s Assembly vote, but Goodell told The Associated Press in September that he would like to find a way to keep the Raiders in Oakland.

“Well, you never want to see a community lose their franchise once, much less twice,” Goodell said. “That’s why we work so hard with our communities to say, ‘This is what you have to try to get to,’ because you need to try to make sure this franchise continues to be successful.” 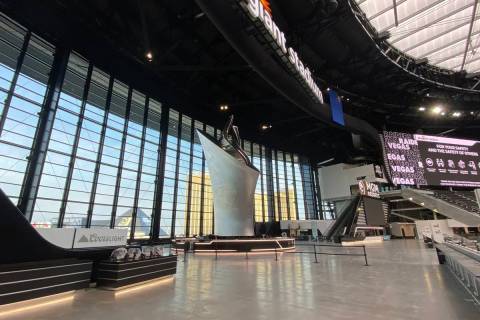 The Raiders and Aristocrat Technologies scored a partnership deal that includes the Silver and Black’s new home, Allegiant Stadium.

The Raiders have played two games at their new $2 billion Allegiant Stadium, but unfathomable events have put the celebration of their move to Las Vegas on the back burner.