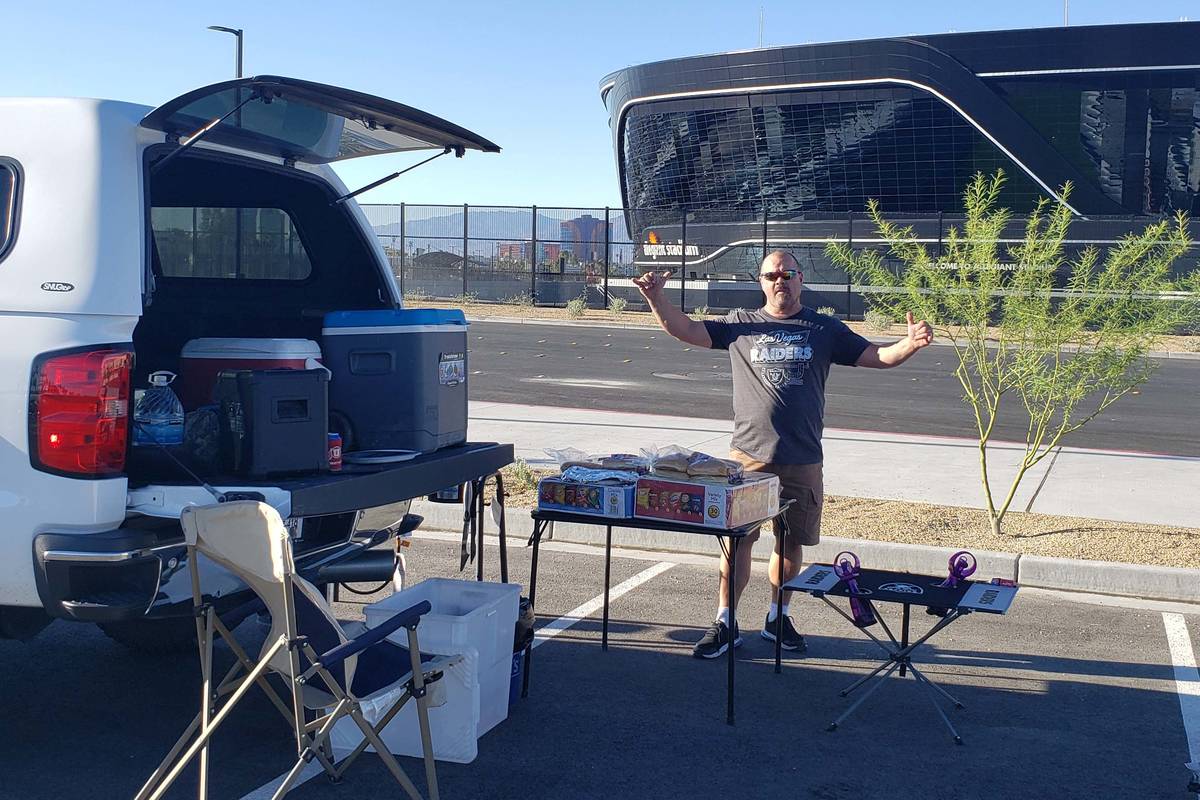 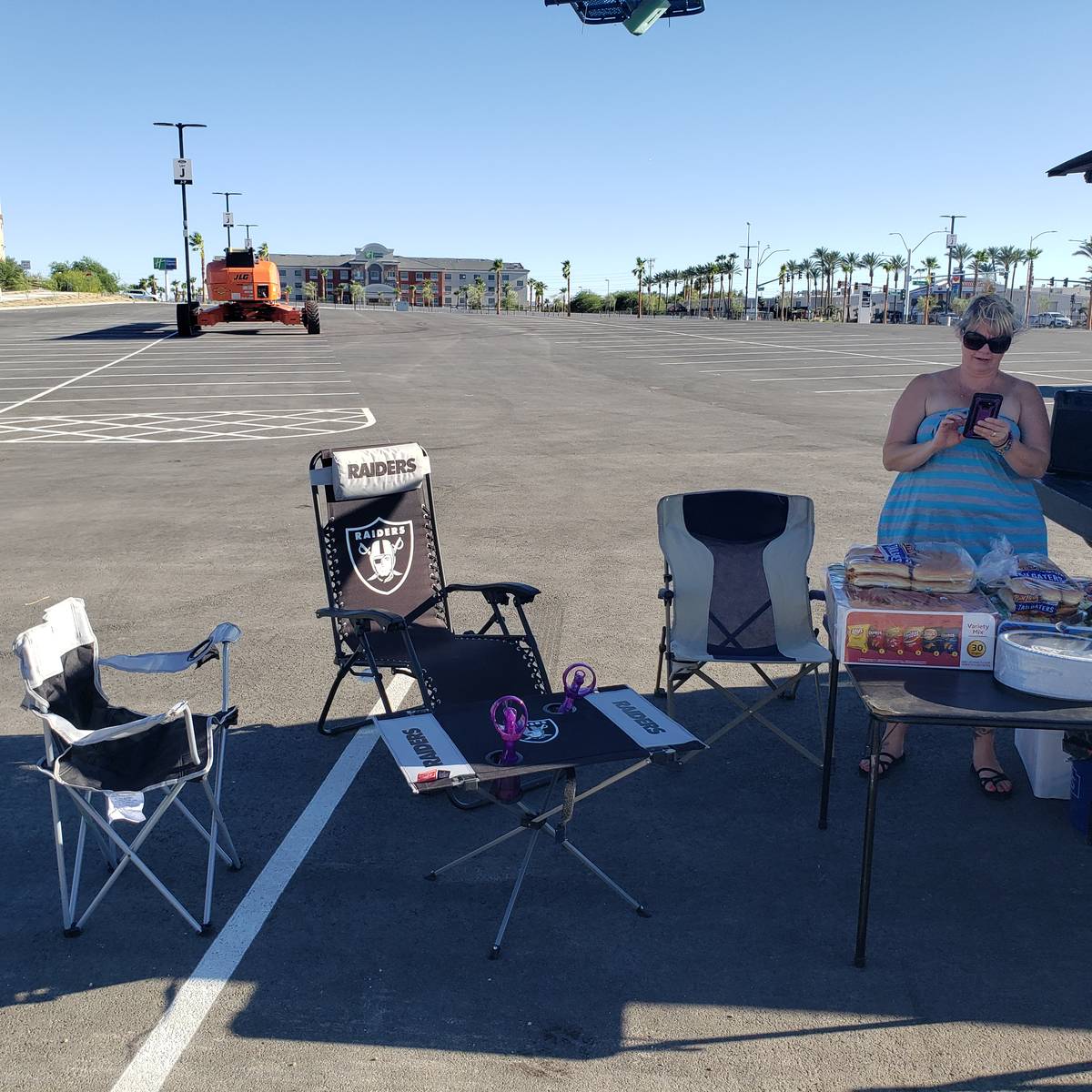 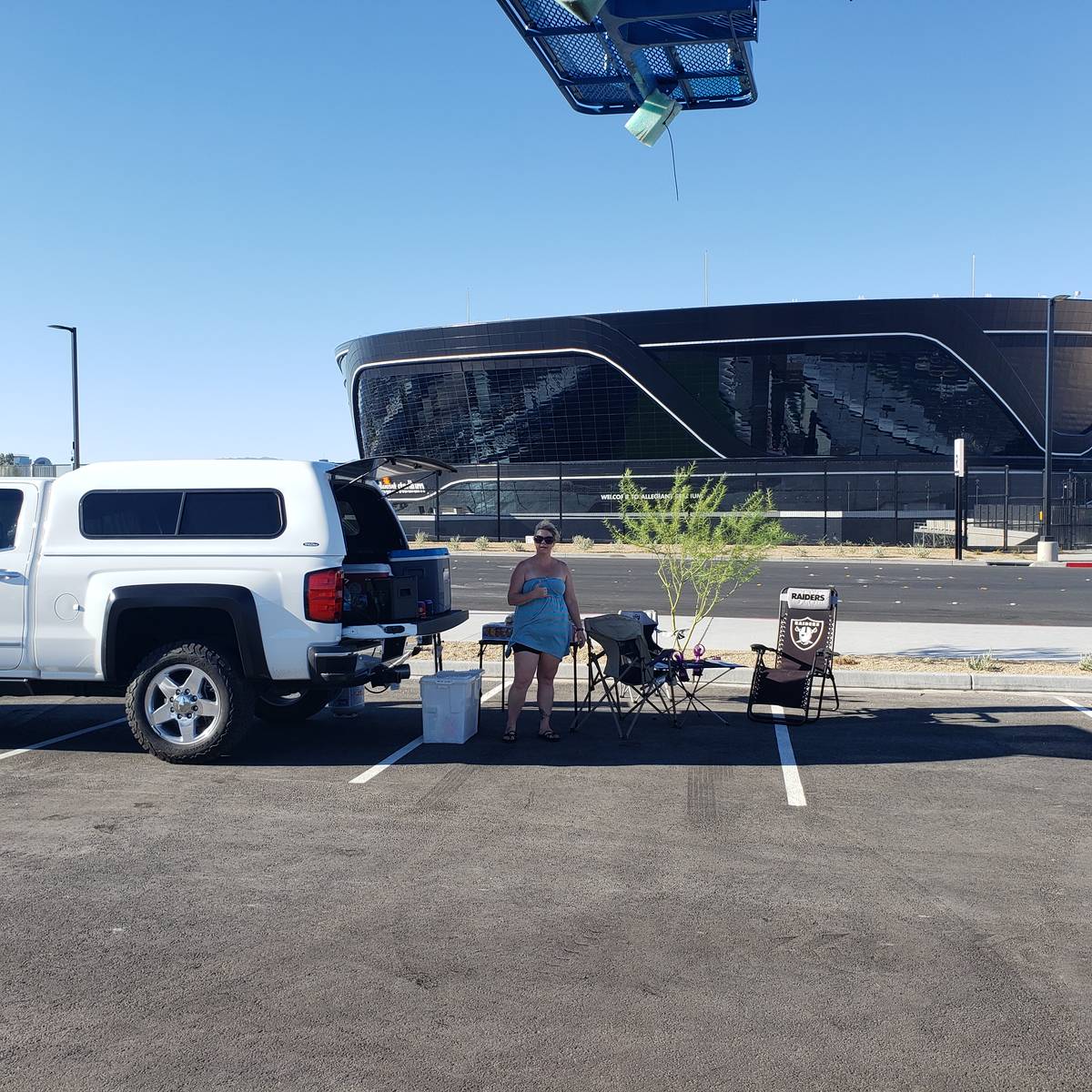 Tonie Silva stand with her tailgate spread with the recently completed Allegiant Stadium in the background. (Courtesy: Anthony Silva)

Though the Las Vegas Raiders won’t be hosting fans at Allegiant Stadium this year, one Las Vegas couple didn’t let that stop them from holding the unofficial first tailgate at the $2 billion facility.

On Saturday, the day after the stadium was declared substantially complete, Anthony and Tonie Silva, recent transplants from Salt Lake City to North Las Vegas, set up a full tailgate spread in Ford Lot J on the south end of the stadium.

“We were planning on tailgating anyway before the games, so we said why not,” Anthony Silva said. “We got there about 5-5:30 p.m. and asked permission from the security guard there … so we set up to tailgate.”

Despite the 110-degree heat, the Silvas kicked back and enjoyed the view of the “Death Star,” the fan-developed nickname of the stadium, and mingled with fellow fans who had stopped by to see the new crown jewel of the valley.

“It was hot; I cannot stress that enough,” Silva said.

Although the Silvas brought enough bratwursts, chips and drinks for a large group, only a few of the people who stopped by over the course of two hours accepted the offer.

“We did have a couple from San Jose … they took us up on some water,” Silva said. “I brought 40 or 50 brats, a bunch of hot dogs, buns, chips and plenty of water. You know people were a little hesitant with all that’s going on, so I can definitely understand that.”

Not wanting the food to go to waste, Silva took the leftovers to his job at a local RV dealership Monday and fed his coworkers.

After about two hours of tailgating, crews at the stadium kindly asked the couple to leave, as the light ribbons and signage lit up the stadium.

“As we were packing up, they turned out the lights,” Silva said. “So, that worked out perfectly for us.”

Silva is originally from the Bay Area and is a lifelong Raiders fan, but his wife is a San Francisco 49ers fan. The couple purchased a legacy brick at the stadium to forever reference their split NFL fandom.

“We bought one of the bricks at the front (north entrance) there as well,” Anthony Silva said. “We put our names on it and ‘house divided.’ I still got to have respect for my wife. I was glad to have her out there with me supporting this to be the first (to tailgate).”

The Silvas are season ticket holders and want nothing more than to be inside the 65,000-seat stadium on game days, but until then, they’re content with making the best of the situation.

“I was kind of crying a bit, to be honest. I was doing that as we were walking around the stadium,” Silva said. “Again, I’m a lifelong Raider fan and this is a dream come true to be able to have season tickets … I just can’t wait to see a game in that stadium. It’s going to be amazing.”

5
Allegiant Stadium voted one of top stadiums in NFL