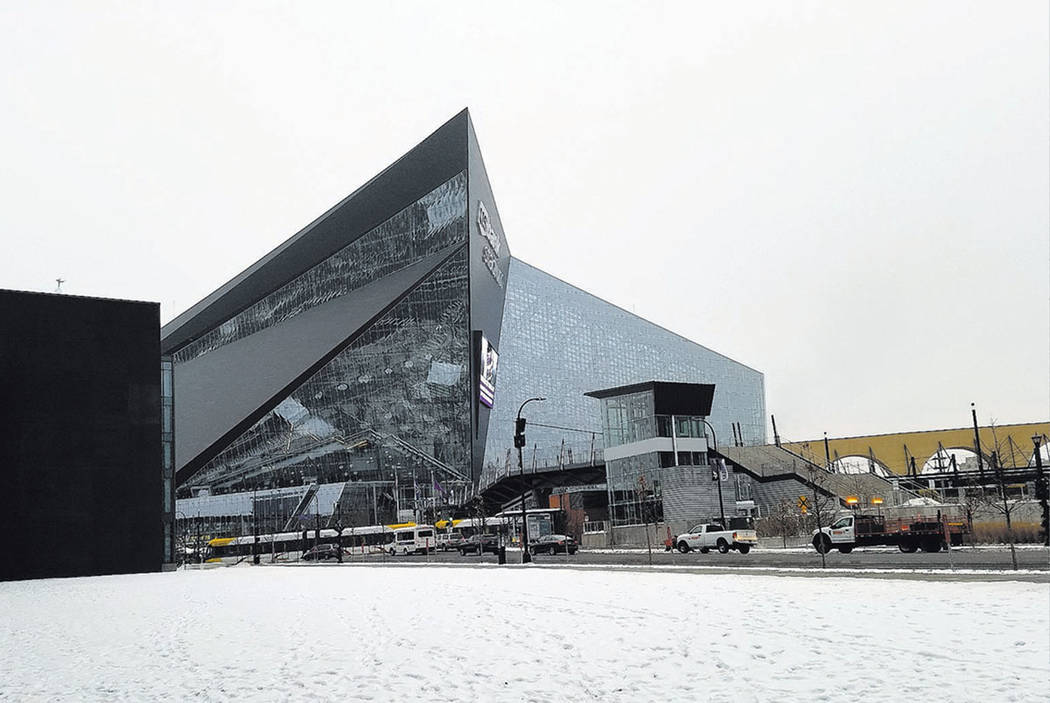 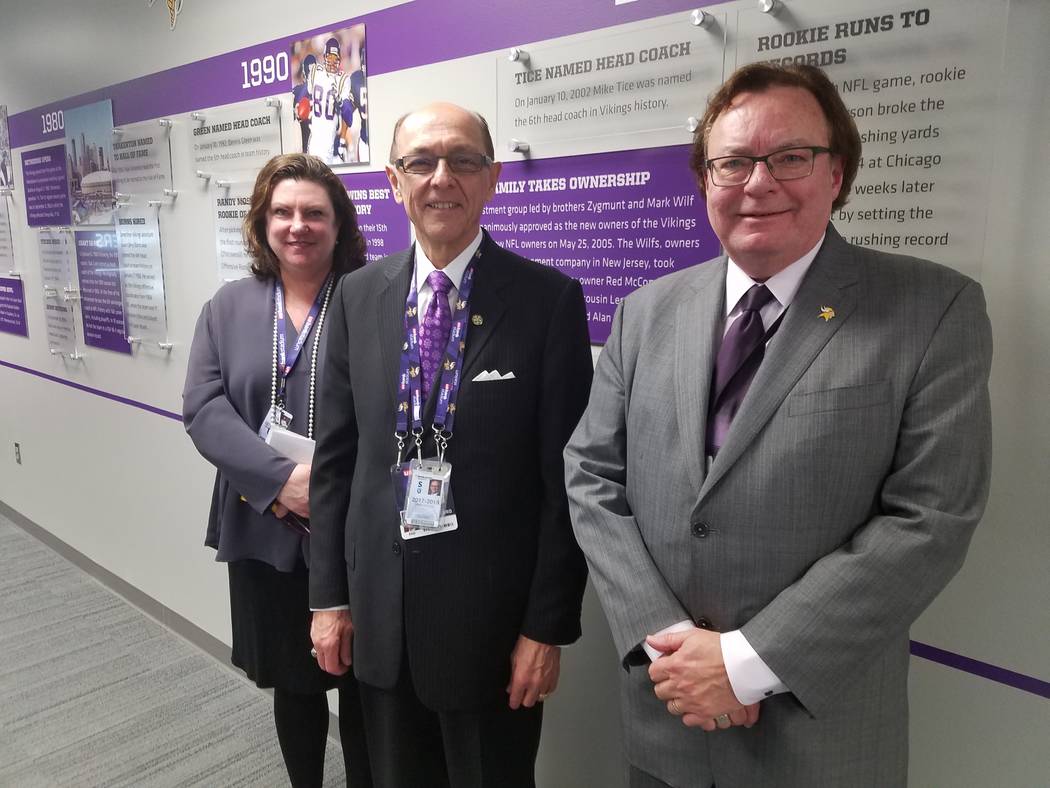 The Minnesota Sports Facilities Authority guides operations of U.S. Bank Stadium in Minneapolis. From left at the media center at the stadium on Dec. 17, 2018, are Jennifer Hathaway, director of communications; Michael Vekich, chairman of the authority board; and interim executive director Jim Farstad. Richard N. Velotta/Las Vegas Review-Journal. 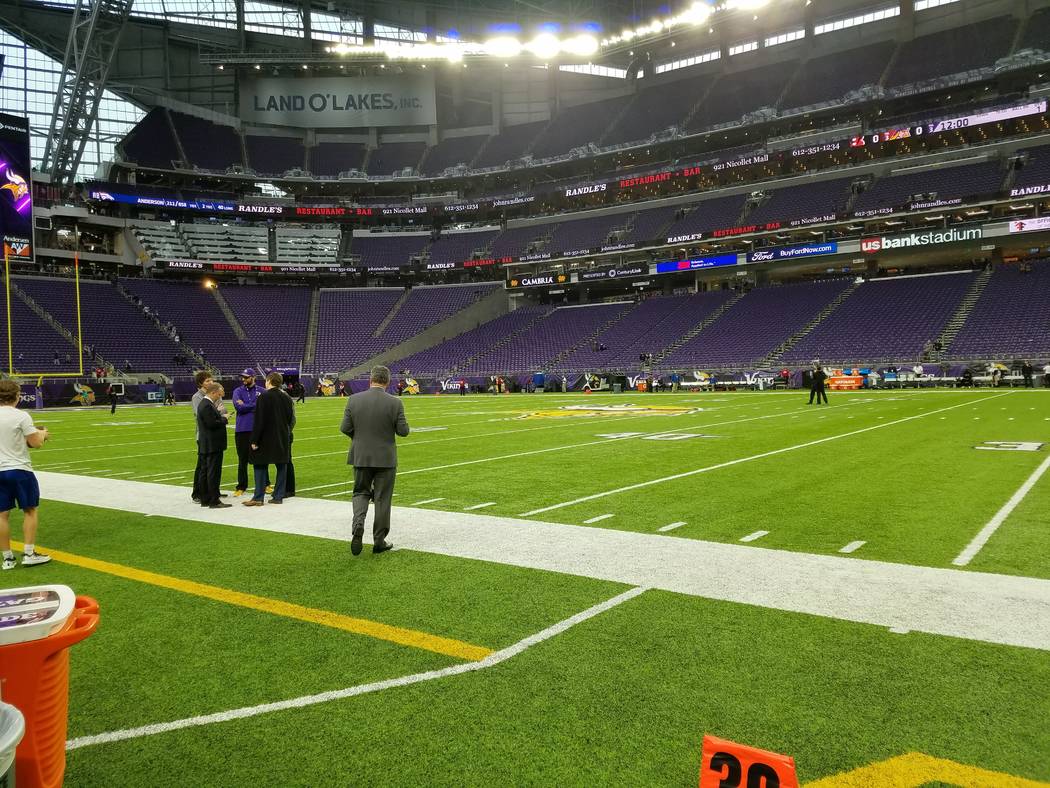 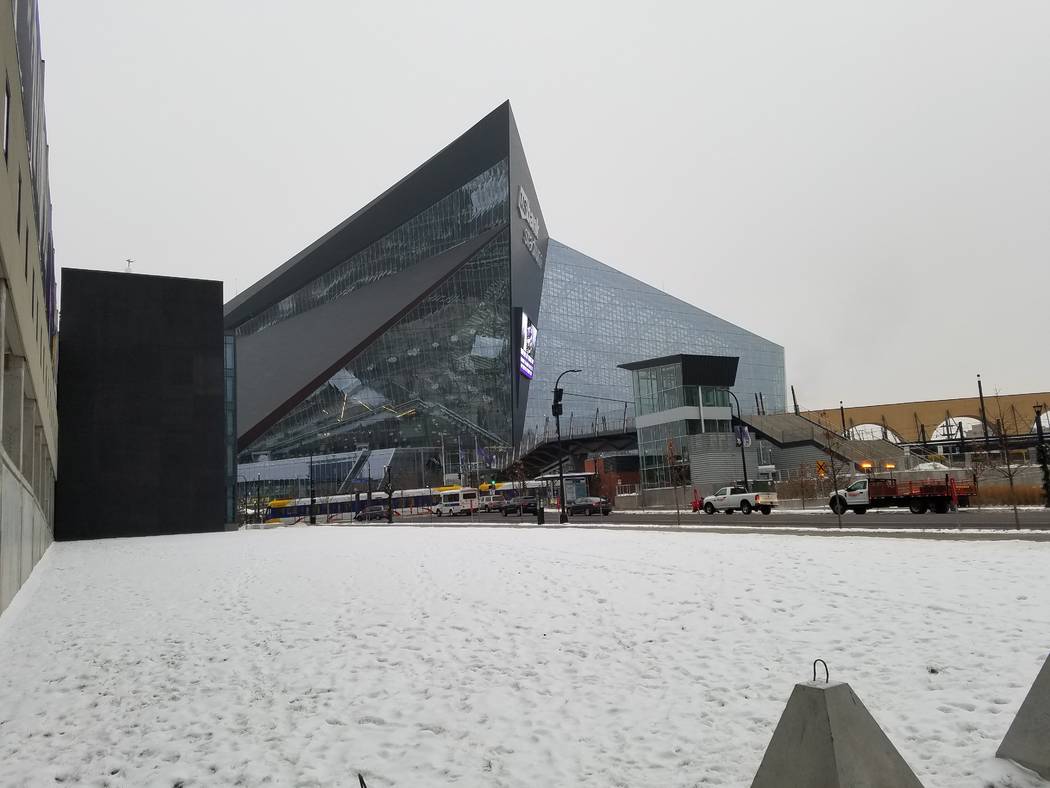 Editor’s note: This is the third in a series on how Minneapolis’ hosting of the Feb. 4 Super Bowl offers a guide for Las Vegas.

MINNEAPOLIS — The heart of Minnesota isn’t exactly the Entertainment Capital of the World, but that hasn’t stopped U.S. Bank Stadium — designed, built and operated under the guidance of the Minnesota Sports Facilities Authority — from attracting 1.6 million visitors to 600 public and private events in its first year.

Established in 2012 by the Minnesota Legislature, the authority has been the connecting point between the NFL’s Minnesota Vikings, M.A. Mortenson Construction Co. — the general contractor that built the 66,200-seat stadium — and the public.

It’s also a guidepost for what the Las Vegas Stadium Authority could look like in four years once the stadium that will house the Oakland Raiders is completed.

U.S. Bank Stadium opened on July 22, 2016. If the Raiders and Mortenson successfully follow in Minnesota’s footsteps, the Las Vegas Raiders’ stadium will open around four years after that milestone date.

When U.S. Bank opened, the Vikings beat the San Diego Chargers in the first preseason game at the stadium on Aug. 28, 2016, and in the team’s regular-season home-opener, the Vikings defeated their biggest rival, the Green Bay Packers, on Sept. 18 of that year.

The stadium was the scene for seven more home games, with the Vikings missing the playoffs with an 8-8 record.

But the very first sports event at the stadium was an International Champions Cup soccer match between A.C. Milan and Chelsea F.C.

The stadium has hosted concerts by Luke Bryan, Metallica, Guns N’ Roses, Coldplay, Justin Bieber and U2, and the 2017 Summer X Games.

Super Bowl LII is the next big event in February, followed by the 2018 Summer X Games in July, the 2019 NCAA Men’s Final Four and the 2020 NCAA Wrestling Championships.

Minnesota’s state high school soccer and football games were played at the stadium, and 13 youth football events were played from August through December.

“As in any business relationship, there are strains, but overall, I think we have had a pretty good relationship (with the Minnesota Vikings),” said Minnesota Sports Facilities Authority Chairman Michael Vekich.

“You can see by the facility, you can see by the quality that’s here, you can see by the (project being completed) six weeks early. I think that proves out a very good working relationship,” said Vekich, who was appointed chairman by Gov. Mark Dayton last summer after the position was held in its early years by Laura Bishop, who has stayed on as a member of the five-person board.

The Minnesota authority has hit a pinnacle by successfully maneuvering for bids for the Super Bowl and the NCAA Final Four. For Vekich, the role of the authority is more mundane today than it was in the construction phase with its monthly meetings addressing capital expense budgets and maintenance programs.

“Our role is oversight and accountability and also includes decision-making on capital improvements and any other major policy decisions,” Vekich said.

That’s similar to how things should look in Las Vegas after construction work is underway. Once a Raiders’ stadium company subsidiary completes construction, the stadium and the land would be turned over to the authority.

Another Raiders subsidiary will manage events at the facility, an opportunity for the team to generate revenue. It’s unclear whether the Raiders would allow companies and organizations to stage dinners and other events in some of the stadium club spaces as that generally is in the wheelhouse of Southern Nevada’s resort community.

The Las Vegas stadium is envisioned to stage more than 40 events annually, but drawing more than 600 as U.S. Bank Stadium did its first year seems improbable.

Another difference in Las Vegas that could become a part of the Las Vegas authority’s role is the sharing of the stadium with UNLV. In any scheduling dispute between the Raiders and UNLV, the authority would be called upon to mediate. But the ground rules are pretty clear: The Raiders and the NFL get first dibs on stadium use.

The biggest contracts the Minnesota authority deals with are with SMG, an internationally known facilities operator overseeing more than 230 public facilities, including Chicago’s McCormick Place Convention Center, and Aramark, a food-service provider that has worked with UNLV, the Las Vegas Convention Center and Cashman Center.

Vekich said that while most things went well in Minnesota’s quest to build U.S. Bank Stadium, a few things could have gone better.

Vekich credited the Vikings’ investment of $600 million for the $1.1 billion project for winning over public sentiment, and he praised Mortenson Construction’s community benefits plan to promote inclusion of women and minorities in construction work. He added that developers are proud that the stadium is one of nation’s most environmentally friendly in the country.

In Las Vegas, the public commitment is $750 million, leaving an estimated $1.15 billion the responsibility of the Raiders. The team has acknowledged a loan from Bank of America and from the NFL and will generate revenue through personal seat licenses, stadium naming rights, advertising and other sponsorships.

Vekich said “value engineering” provided elevators and escalators that might need to be replaced sooner than expected, and designers might have fallen short on providing storage space within the stadium. Also, one of the first capital projects the authority had to tackle was spending $500,000 for a new kitchen area to deliver food quicker to concessionaires.

“We haven’t had to spend a lot on the general structure, but in five to 10 years, I’m sure we’ll see some things we’ll need to address,” Vekich said. “The field may need to be replaced in a few seasons.”

That shouldn’t be an issue in Las Vegas, where the Raiders will be playing on a grass field that will be tended outdoors throughout the season, then wheeled indoors for games.

The Raiders also will be responsible for replacing the artificial turf surface UNLV anticipates playing on, but the university will have to provide end zone panels and UNLV logos on the field on the floor surface.