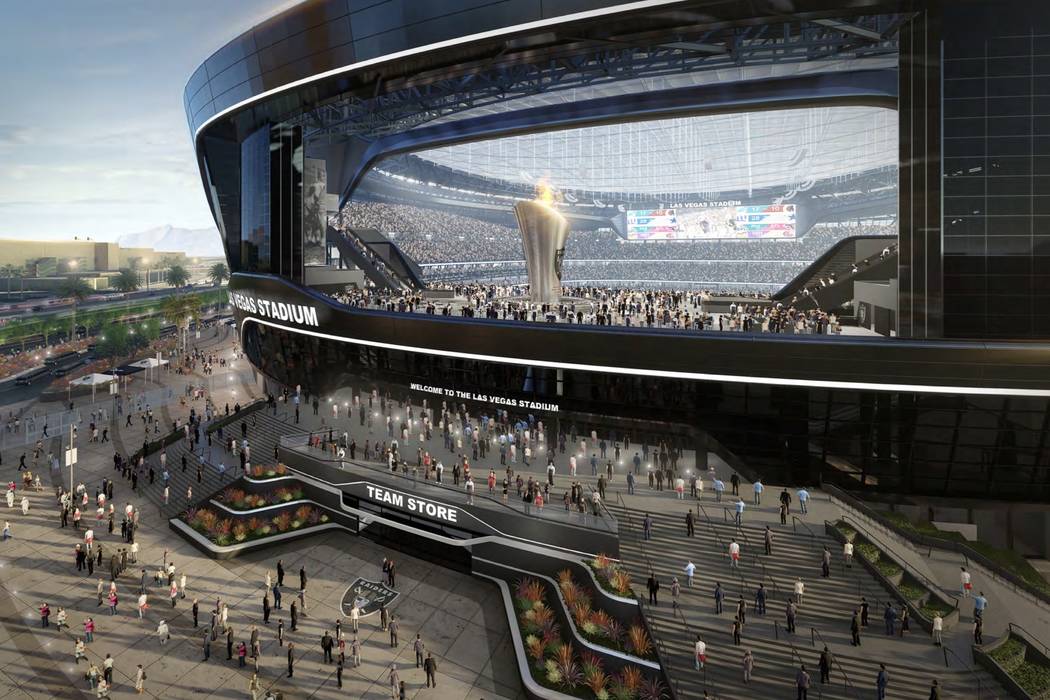 There’s no doubt in Don Webb’s mind where the most popular photo op will be in the new Las Vegas stadium.

It’ll be at a plaza where an eternal flame will be lit in memory of Raiders founder Al Davis. From there, look to the north and you’ll catch a view of the Las Vegas Strip.

That 80-by-215-foot opening will have lanai doors that can be opened for fresh air on those perfect fall days Southern Nevada is famous for. Those doors and the translucent stadium roof will give the Las Vegas stadium the look and feel of an outdoor venue with a natural grass field.

“That whole plaza area up there in that location around the torch is going to be spectacularly popular,” predicted Webb, the chief operating officer of the Raiders’ stadium construction subsidiary.

Just above the main entrance to the stadium, the plaza will be ideally suited for fan traffic — from there, some people will move down toward the field level or up to the higher reaches of the stadium cheap seats. Having a main entry where half the attendees go up and half go down is considered the ideal ingress and egress pattern for a stadium.

Similar to other stadiums

The opening at the stadium will be similar to those offered at Lucas Oil Stadium in Indianapolis and U.S. Bank Stadium in Minneapolis. Both of those doors open to views of their respective downtowns.

Webb explained that team owner Mark Davis wanted to have the feel of an outdoor stadium, even in a desert climate.

“We thought the best compromise came in three ways,” Webb explained. “One, a translucent roof to let some natural light in. It’s not going to be completely transparent or clear. Two, expanses of glass. It’s a glass box and that’s not a cheap way to build a building, but we wanted that transparency.

“Three, we wanted a large opening that even when closed, appears to be open. We have a view corridor from that plaza level through the torch area out looking at the Strip. That’s a billion-dollar view as far as we’re concerned,” he said.

Rendering of the new Raiders stadium being constructed in Las Vegas.

Webb said the team looked at the sexier option of a retractable roof, but the reality was that most of the time the roof would be closed because of the late summer and early fall desert heat.

That whole plaza area up there in that location around the torch is going to be spectacularly popular.

“For the big stadiums, the closed ones, you have to pre-cool the building 18-24 hours before they start driving the temperature down in the building because when you bring 65,000 people in, it’s going to warm up really quickly,” said Lanson Nichols, vice president of sports architecture for Kansas City-based HNTB, the architect of record for the project.

“So you’re pushing (the temperature) down below what would be normally comfortable because it rises really quickly when you get all those people.”

Webb said the translucent roof will allow some natural light into the building and the exterior glass will be canted at a 12-degree angle.

And, the glass will be black.

“The interesting thing about black glass is, in your car if the windows are heavily tinted, you have no problem seeing out,” Webb explained. “People from outside on a sunny day will have a hard time seeing in. But at night, all the lights inside the stadium will be very visible from the outside.”

The lanai doors, meanwhile, will likely be closed most of the time because of the heat. That doesn’t mean they have to be, but there are rules that will guide those decisions.

Rendering of the new Raiders stadium being constructed in Las Vegas.

Stadium officials are required to notify Clark County inspectors at least three days in advance if they intend to have doors open for a game or event.

The National Football League also has rules on stadium openings, both doors and roofs. A decision on whether openings are allowed have to be made at least 90 minutes before kickoff.

Those decisions will be guided by wind speeds and weather monitoring. If the wind is expected to exceed 25 mph, the windows must be closed. The team also will be required to have weather monitoring stations in several locations miles away from the stadium to determine if there’s any likelihood of a sudden storm.

Game officials also can order openings closed if it’s believed they present a safety hazard for people in attendance. It will take about 10 minutes to close the stadium’s lanai doors.

In the event of a sudden closure, people would be cleared from the plaza area.

One other safety matter: The Al Davis eternal flame — it won’t be an actual flame, it will be simulated.