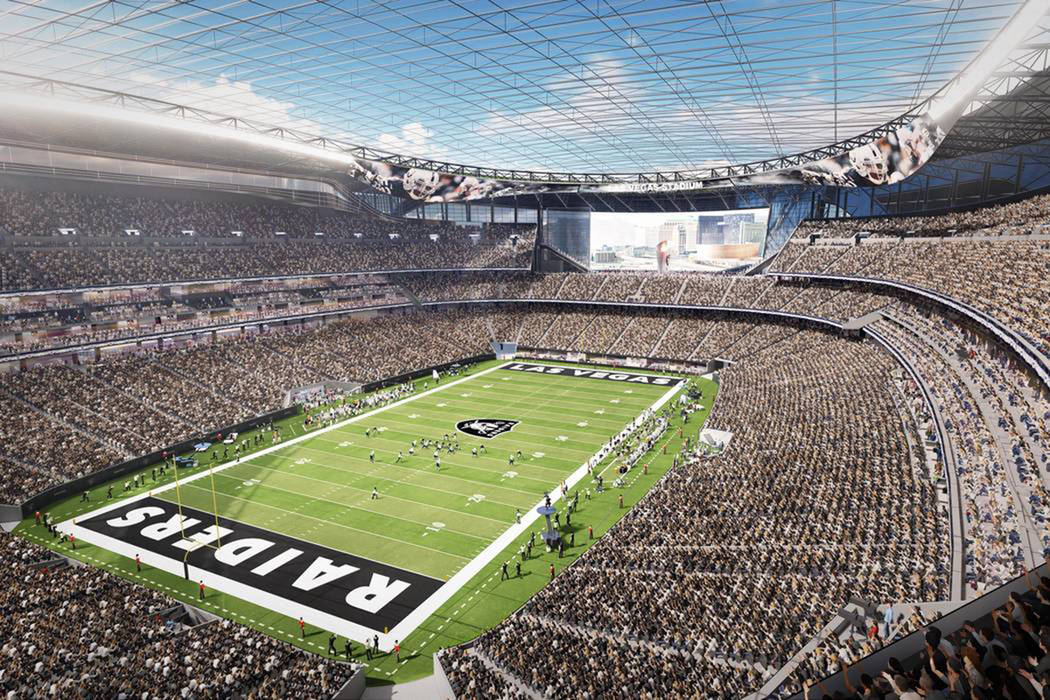 A Super Bowl in Las Vegas could become the first event ever producing more than $1 billion in economic impact on the community, an economic development expert said Thursday.

Jonas Peterson, president and CEO of the Las Vegas Global Economic Alliance, told a crowd of more than 150 that the explosion in popularity of sports in Southern Nevada and the new infrastructure that has been produced for sports assures that the city would enjoy an economic bonanza if the new Las Vegas stadium is awarded a future Super Bowl.

Peterson was the kickoff speaker for the first-ever Las Vegas Global Sports Business Summit at the Las Vegas Convention Center. The event, organized by the Las Vegas Convention and Visitors Authority and the Global Economic Alliance with 235 registered attendees, is a business tie-in to the LVCVA’s Ultimate Vegas Sports Weekend that will feature public rallies around weekend events for NASCAR, UFC, USA Sevens Rugby and the Vegas Golden Knights.

Peterson and Jeremy Aguero, principal for Las Vegas-based Applied Analysis, led a lineup of 25 mostly local speakers and panelists on all aspects of sports marketing, including branding, sponsorships and the future of sports business in Southern Nevada.

Peterson based his expectations of a Las Vegas Super Bowl on visitation results for the 2018 game at U.S. Bank Stadium in Minneapolis. He said the Super Bowl matchup between the New England Patriots and the Philadelphia Eagles drew 125,000 people to Minnesota.

The game also brought 310,000 to Las Vegas, most coming to gamble on the game and to enjoy special parties presented by resorts.

Southern Nevada is gearing up for a future with sports with new infrastructure — the $1.8 billion Las Vegas stadium and the $150 million Las Vegas Ballpark — as well as new hotels, Resorts World, the Drew and downtown’s Circa. He expects the need for access to resorts and venues to result in new investment in transportation.

Peterson suggested that the stunning success of the Golden Knights hockey franchise bodes well for the city’s future. The team has helped T-Mobile Arena become the top-grossing sports arena in the country.

The early returns on the effects of sports on Southern Nevada are encouraging, he said.

Calling sports “the purest form of economic development,” Peterson said the presence of major-league sports teams has resulted in new jobs and has improved the quality of life with family-friendly sporting events for entertainment as well as philanthropic contributions to the community by the teams.

Aguero provided some background history on the growth of professional sports over the years with the birth of UFC in Las Vegas, the success of the National Finals Rodeo over the years, the steadiness of minor-league baseball and the surprising growth of the NBA Summer League.

Aguero noted that attendance at Golden Knights games is the 17th highest in the National Hockey League despite T-Mobile Arena being the 30th largest NHL venue. Average attendance at games was 18,042 last season — and seating capacity is around 17,500 indicating supporters are more than happy to buy standing room to see the team live.

Aguero called the Las Vegas Aces WNBA team “second to none in community involvement” and that the Las Vegas Lights United Soccer League team has particularly connected with the Spanish-speaking community resulting in the sixth-best attendance numbers among USL teams.

While most of the speakers spoke glowingly of the city’s future with sports, some shared some reality checks.

Mark Prows, senior vice president of entertainment and operations at MGM Resorts International, talked about his company’s early adoption of sports with the MGM Grand Garden and the eventual investment in T-Mobile Arena.

He warned that while most existing sports franchises are in an upward trajectory, there’s a long list of failed franchises in the city’s history. He also noted that while Las Vegas is enjoying a burst of enthusiasm for sports, the city is still one of the smallest markets for professional sports with just more than 2 million Southern Nevada residents.

He also noted that sports teams have unique challenges in Las Vegas because of the abundance of shift work taking around one-third of the population away from games because of the times they go to work.