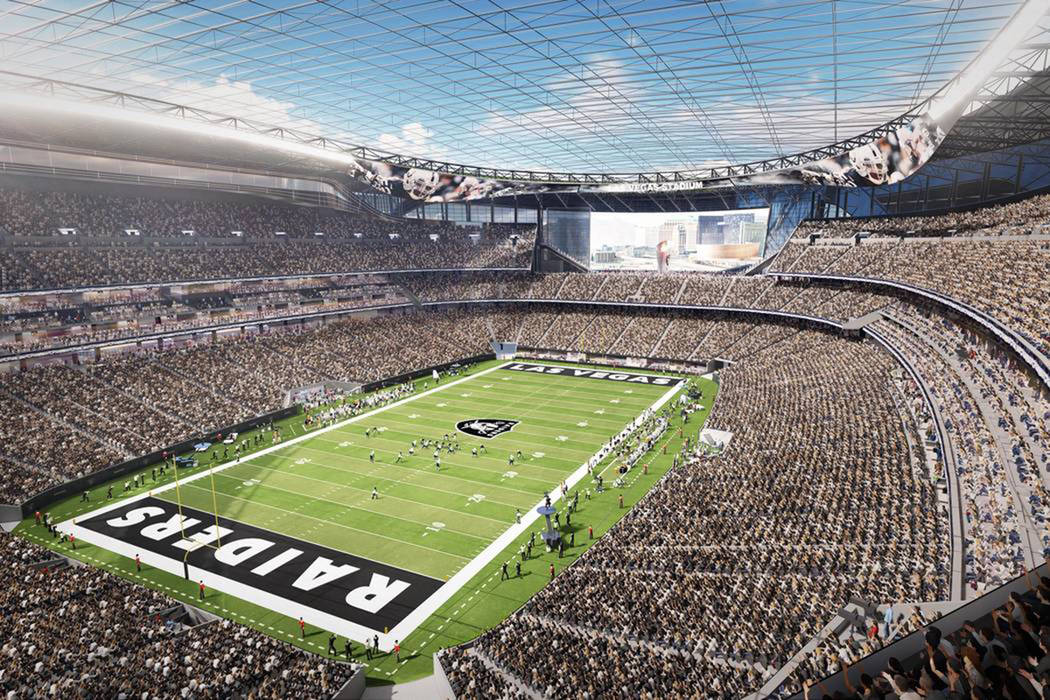 A provision in the tax reform legislation unveiled by House Republicans on Thursday could jeopardize financing plans for the proposed $1.9 billion Las Vegas Raiders stadium project.

A section of the 429-page bill would end tax-exempt status on bonds used to pay for stadiums used by professional sports teams.

The proposal involving the Oakland Raiders’ bid to build a 65,000-seat domed football stadium at Interstate 15 and Russell Road clearly falls within the definitions and effective dates of circumstances that would be banned in legislation President Trump has vowed to approve by Thanksgiving.

The financing package includes a $750 million public contribution that would be financed through tax-exempt bonds.

The Las Vegas Stadium Authority and the Southern Nevada Tourism Infrastructure Committee have long considered the use of tax-exempt bonds as a mechanism to make the stadium affordable as an economic development driver for Southern Nevada.

Jeremy Aguero of Applied Analysis, which serves as the staff to the stadium authority, said Friday that authority board members have been briefed about the legislation and that new analyses of the impact the change would have would be modeled.

Aguero said he received “about two dozen calls Thursday and 18 of them were about this legislation.”

“The stadium, as designed, appears to meet the definition of a project that could not use tax-exempt bonds,” Aguero said Friday. “That could potentially affect the financial models we have been using in estimating the potential cost of the project. The extent to which that is is unknown.”

Aguero said at its most fundamental, the proposal would increase the interest rate and either make the project more expensive or decrease the yield.

“We stress-tested the model for things like higher interest rates,” Aguero said. “We understand the potential that comes with either legislative risk, or interest-rate risk or development risk, for that matter. I wish I could tell you it’s going to cost X amount of dollars in order to make it work but we need to go through the exercise of making sure we understand all the components of that legislation because that’s not the only one that will affect municipal finance.”

A legal expert in tax-exempt projects and real estate-based financings said many people were caught by surprise by the content of the legislation.

“We all knew and had been warned that the House version of the tax bill would drop this past week and they gave us plenty of warning that it was going to drop on Thursday,” said Richard Jost, an attorney with Fennemore Craig who also teaches classes at UNLV.

“I think the bigger surprise was what was in it,” he said. “All of the people who claimed to be in the inner circle and in the know in Washington had been pretty adamant about what was going to be in it and what was not going to be in it. I think the vast majority thought state and local government debt issuance for public-purpose projects was not in the bill at all.

“It was somewhat of a shock to everybody that not only was it in the bill that effective yesterday, the day the bill dropped, you can’t issue so-called governmental bonds for sports stadiums and effective on the last day of this calendar year, bonds issued by state and local governments on or after Jan. 1, 2018, can be issued, but if they’re issued for so-called private activity uses, the interest on them is not tax-exempt.”

Jost said it was unclear exactly how the legislation would affect stadium efforts.

“Now, you’re really into crystal-ball fortune telling,” he said. “To try to calculate the financial impact is pretty difficult right now, even if you assumed the bill was going to pass and if that provision is going to be in the bill that passes.”

He predicted that supporters of the stadium would be burning up the phone lines between Nevada and the state’s congressional delegation to amend legislation to exempt the Las Vegas stadium project from the plan.

‘Knife through our heart’

“They need to let the congressional delegation know that this particular provision is a real knife through our heart on the stadium deal,” Jost said. “If it stays in the bill at all, at a minimum, let’s change that effective date for the provision for bonds issued after Nov. 2, 2017. Let’s say for bonds issued for a stadium facility that had not been approved prior to Nov. 2.”

In an emailed statement, Rep. Dina Titus, D-Nev., who co-chairs the Public Works and Infrastructure Caucus and is a member of the House Transportation and Infrastructure Committee, said, “Eliminating the tax exemption for stadiums could cost Clark County and universities nationwide more money to build projects that are already underway.”

Jost said it’s common that projects underway are grandfathered out of legislative proposals.

“The simple fix would make the effective date some date in the future or on any project not already approved by a government,” he said.

The authority next meets Thursday and Aguero said it’s unclear whether the legislation would be a topic of discussion at that meeting.

The tax provision could be stricken or amended as the approval process moves forward, but lawmakers on both sides of the aisle have discussed potentially removing the tax break for years.

Representatives of the Raiders did not return calls for comment.