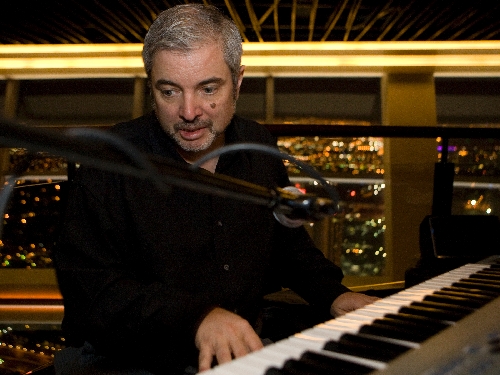 “And the piano, it sounds like a carnival, and the microphone smells like a beer. And they sit at the bar and put bread in my jar, and say, ‘Man, what are you doin’ here?'”

For professional musician Peter Radd, being the “Piano Man” is not as depressing as the story told in the popular song by Billy Joel.

He makes a six-figure salary in a town crawling with talented musicians.

“My dad would play the piano and that’s what I wanted to do and that’s all I’ve ever done,” Radd said. “And I love it more now than I used to.”

He remembers going to youth music camp and hearing instructors talk about playing behind stars like Frank Sinatra and Dean Martin in Las Vegas. The boy wasn’t so much impressed by the names as he was by the thought of living in a city where they played five or six days a week.

Radd was music director for the “Bottom’s Up” show at the Sahara hotel from 1988-90, before going on tour with the Four Tops and later The Temptations.

Breaking away from the starving artist stereotype, Radd parlayed his talent, creativity and business savvy into a lucrative career. He produces commercial jingles in his home studio, including one for local attorney Glen Lerner (“Glen Lerner is the way to go”) and another for University of Nevada, Las Vegas (“U-N-L-V tickets, we get you there”).

Question: How difficult is it to find work as a professional musician in Las Vegas?

Answer: I think Las Vegas is the greatest city in the world to be a professional musician. What you have to do is pay attention to what the customer wants and what they’ll pay for and get connected to that. If you’re locked into just one thing you do and can only stay there, then it can be tough.

Question: How are you able to get gigs here?

Answer: You network, you sell yourself, you make connections.

Question: What could you have done to make more money in your career?

Answer: I could have blown less of it while I was young. Let’s just tell the truth. I could have concentrated in the portion of business on jingles, on how and why they purchase jingles. If I’d done that earlier, I’d be further along in my jingle career.

Question: You’ve produced some 300 jingles and commercial scores. How do you come up with them?

Answer: It’s a combination of what I can suggest to the client and also knowing how they want to reflect their company. They may have a slogan already and we’ll simply put that slogan to music. Other than that, it’s just a matter of the client and I putting our heads together and working long enough to come up with something that works for them.

Question: How has the music business changed in Las Vegas over the last 20 years?

Answer: What’s going on in Las Vegas is not the music business. It is the gaming and tourism and convention business, of which music is a big part. So as tourism and the customer change, so must the music follow.

Question: What advice would you give other musicians in Las Vegas?

Answer: Always stay in touch with your original love of music, number one. Number two, find out a way for you to share your gift with others. Number three, be very cautious about fame.

Question: What do you mean by that?

Answer: People in our society are so obsessed with fame that we equate fame with success and they’re not the same thing.

Question: How difficult was it starting out? Did you have a hard time getting gigs early on?

Answer: My first job out of college was on a cruise ship. I got a call and went on a ship for a year to Miami, the Bahamas, Puerto Rico and St. Thomas. It was a fantastic first job because it bridged the gap between what the educational world was like and what the real world is like.

Question: How much do you have invested in the business, your studio and equipment?

Answer: By business standards, it’s not much. Most studio tasks are done on a computer. I’ve got one microphone, the keyboard and a computer. All of the big things you’d see in a recording studio — the mixer, the tapes, all of the big knobs — they’re all in the computer now. I can produce jingles, telephone hold messages, song demos.

Question: So that brings it down to what?

Question: What do you consider some of your best work?

Question: What do you like most about your job?

Answer: I love playing background music at a party. I hate the term “background” music. I wish it was ambience music or atmosphere music. I have no desire to play concerts or be famous. The other thing I love is the variety of things that I do. I can do a telephone message and then run off to one of my jobs in the casino.