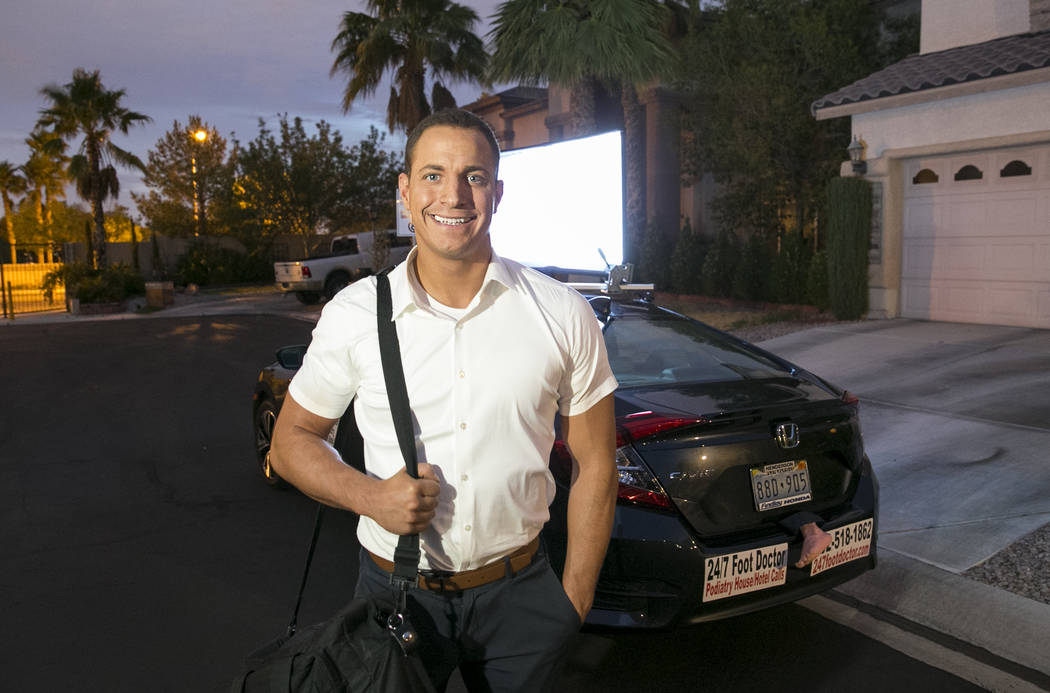 Two Las Vegas professionals are hanging onto two occupations seemingly on their way out of existence.

For Patty Romeo, being a travel agent is the joy of providing personal service in an industry filled with impersonal websites.

Meanwhile, Sean Reyes is trying to “bring back” the house call doctor.

Romeo, president of Holiday Ambassador Travel, has resisted the extinction of the travel agency for more than 20 years.

It seems like ages ago that airlines paid travel agents a commission for booking passengers on their flights. But the major airlines started reducing the percentage paid until 2002 when Delta Air Lines became the first major carrier to eliminate all commissions to agents.

Travel industry experts all but predicted that travel agents would go the way of the dinosaur. And for the most part, they have except for a few holdouts such as Romeo who have maintained a niche serving longtime loyal customers, especially on complicated itineraries, international travel with bookings on airlines many people have never heard of and cruises.

“Those of us who have been around long term have absolutely had to adapt to the changing times,” Romeo said. “A monkey can book flights on Southwest Airlines because their website is very easy to use.”

But sometimes the process doesn’t go smoothly for one reason or another, and travelers find themselves with a booking they regret.

“If you want to save $10 to go from here to L.A., with a change of planes in Minneapolis, knock yourself out,” she said.

But most of the time, she will get calls from remorseful loyal customers asking her to help undo something they did on an airline website.

While sometimes her job is fixing customer mistakes, the real value in her service is applying a personal touch, wading through the options of a complicated itinerary or offering wisdom from her years of personal travel experiences and information from classes she took at UNLV or what is now College of Southern Nevada — which don’t offer as many courses for travel agents as they once did. She said airline websites are impersonal and good luck reaching anyone who can help you by phone. And, by the way, if you do, you might get charged a new fee.

Romeo has taken cruises with most lines and isn’t shy about recommending options to her customers, which are evenly split between corporate and leisure travelers.

“Cruises are the biggest things we sell vacation-wise,” she said. “I know every line, and I’ve hiked on glaciers, kayaked with whales and gone crabbing in Alaska,” she said.

For those who have never been on a cruise, she will recommend a short “booze cruise” just to see if you like it before going on a weekslong adventure aboard a floating recreational vehicle.

She still collects some commissions from travel vendors, but she now charges $10 for one-way ticketing and $20 round trip for airline bookings to make up for the airline industry’s policy not to compensate travel agents.

Romeo, a daughter of the late longtime Las Vegas physician Dr. Donald “Doc” Romeo with 10 siblings, has a client list built over a lifetime, and that client loyalty has helped keep her in business. That, and a relatively recent reduction in overhead that has her working from her home.

“Lots of agencies have become home-based,” she said. “It’s the best. I can feed my dog and do my laundry while I work from my home computer.”

She got the idea to work from home when her accountant recommended it after her strip mall landlord raised her office rent. She has no regrets about not being in a traditional workplace and won’t go back, she said.

Sometimes, she will do all her work at home and mail, fax or email travel documents to clients. Other times, she will meet a customer at a coffee shop with Wi-Fi, get on the laptop and offer face-to-face advice.

And, sometimes she won’t see her customer at all.

“I’ve had clients for 20 years that I’ve never seen their faces,” she said. “They either call me or shoot me an email and they say, ‘I want to do this, this, this and this,’ and I book it, send it to them for approval, they email me back and, boom, away we go. It’s a breeze.”

Meanwhile, in the age of convenience and next-day delivery service, Sean Reyes, 34, sees an opportunity to revive the house call doctor era.

Reyes works a regular 9-to-5 job as a podiatrist at the Foot, Ankle & Hand Center of Las Vegas. But in the evenings, you might have seen him driving around in his “footmobile,” making house calls to tourists and locals.

“I have a (fake) foot that comes out of my car,” Reyes said, joking that “it looks like a dead body’s hidden in the trunk.”

It’s one of the many creative ways Reyes tries to get the word out about his side business, a large part of which is removing ingrown toenails.

“If it’s not taken care of, it hurts like crazy,” Reyes said. “Let’s say a businessman is coming up here and he’s visiting and he has a big important meeting tomorrow. Somebody calls me up at 11 p.m. or midnight, they need it removed and I’m there.”

If it’s not an ingrown toenail, then it’s usually treating gout, plantar fasciitis “and then every now and then you get ankle sprains and fractures, and things like that.”

Reyes estimates 60 percent of business comes from locals, and the rest from tourists.

“It’s really surprising,” Reyes said. “I figured it would be nothing but tourists, but nobody’s open on weekends.”

But business is patchy. Some weeks he will have no house calls, and then the next week he could have three house calls in one day, he said.

Reyes moved to Las Vegas from Ohio two years ago, where he completed a three-year reconstructive surgical residency at Ohio State University.

He made the decision to be a house call doctor while he was in school, based on an interaction he had with a doctor he went to see for his own medical reasons.

He needed a family doctor. He asked around and decided to see one in particular based on his reputation, but he didn’t take insurance.

“I heard so many good things about him, so I sucked it up and paid his price to see him in office. He spent about 75 minutes just talking with me about my problems. I was thoroughly impressed with the one-on-one interaction I got, and then I just figured why not just see somebody at home if you’re going to spend that much time with somebody and bypass the overhead,” Reyes said, adding that it’s the overhead and paperwork that’s “killing doctors nowadays.”

He moved to Las Vegas after he finished his residency, thinking it would be a suitable market for being a house call doctor.

“There are so many tourists here — so many people coming in and coming out that need health care. And it’s a large, growing city,” Reyes said. “You got to go where the opportunity is. I can’t pull this off in a small town.”

Reyes said he really enjoys the level of care he is able to provide during house calls and especially likes not working with insurance companies.

If the business were to grow enough to sustain him full time, he said he would love to be a full-time house call doctor.