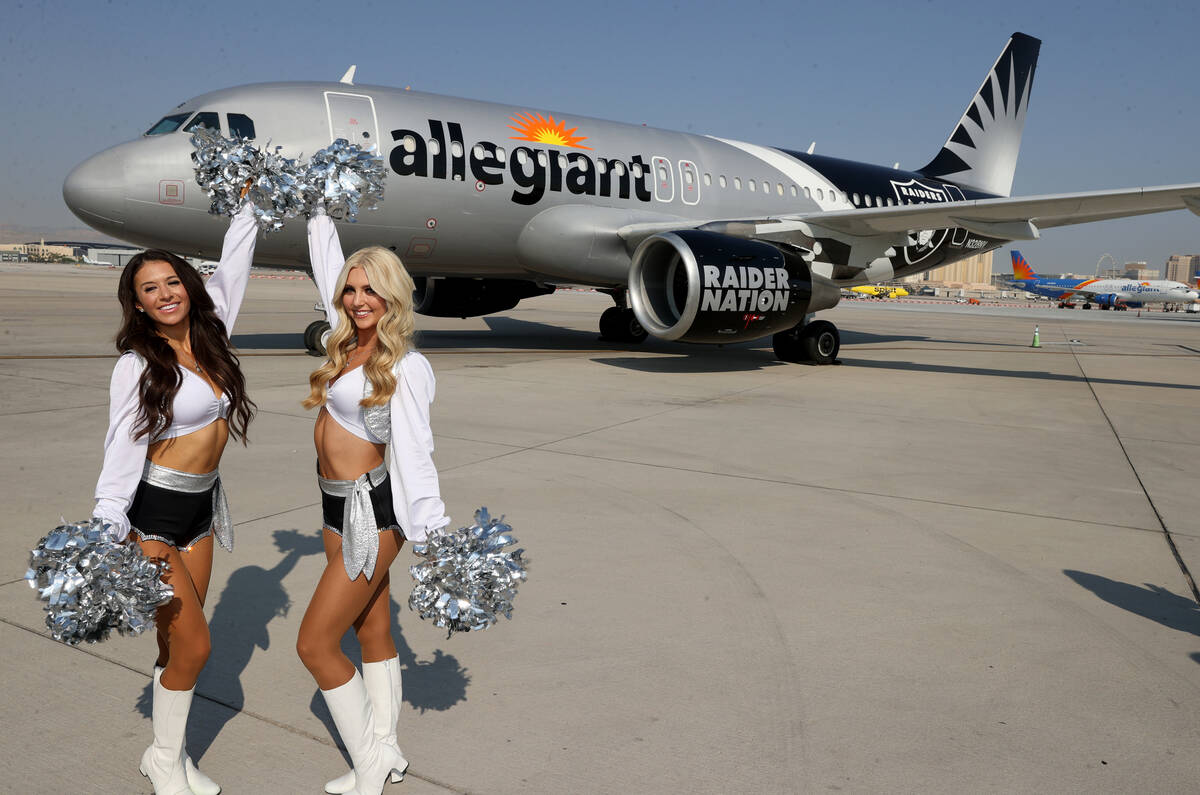 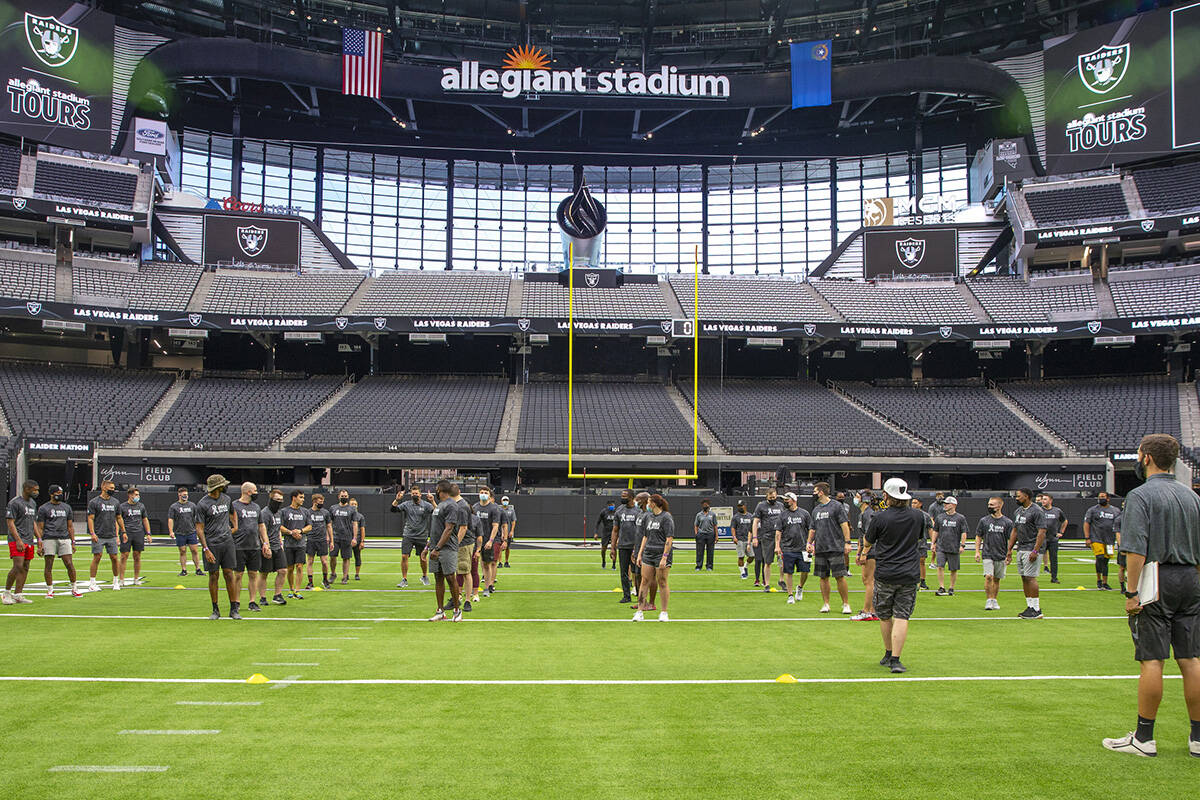 Airmen from Nellis and Creech Air Force bases gather on the field during a Salute to Service Boot Camp at Allegiant Stadium in August 2021 in Las Vegas. (L.E. Baskow/Las Vegas Review-Journal)

The Las Vegas airline behind the naming rights partnership with the Raiders and Allegiant Stadium is looking to add other markets with teams. This is due to the initial success of the Raiders deal, according to Allegiant Chief Marketing Officer Scott DeAngelo.

“Part of our strategy with Allegiant Stadium was to take our affordable accessible air travel to the next level and also include that accessibility to professional sports and other major entertainment events,” DeAngelo said. “We did that last year and we’re doing it again this year with a very successful way for people to be able to afford air travel, hotel and be able to get tickets all in a one stop shop.”

The airline has been offering packages that include round trip air fare and tickets to a selected Raiders home game. Travelers also automatically receive the “Allegiant Total Bundle” that includes baggage, seat selection, priority access and the ability to change travel plans without fees.

Allegiant has about 500 tickets per home game allotted for their travel packages, which require a minimum two-night hotel stay. With about a month left before the regular season most games are down to 50-100 tickets, DeAngelo said.

The airline is now looking at other markets it serves, particularly ones where it bases pilots and other crew members, to do much of the same.

“Where we can do this (sports travel packages) on a broader scale,” DeAngelo said. “Whether it’s the Indianapolis Colts… FC Cincinnati and most recently the Detroit Pistons. It’s kind of cool, across all different sports now we’re taking what obviously the flagship example is, Allegiant Stadium, and here in Las Vegas, the ‘Greatest Arena on Earth,’ and beginning to do that across the country in the different places we have relationships with teams.”

In June, Allegiant announced an agreement with the Pistons that makes it the NBA team’s official airline. As part of the deal, Allegiant hopes to link fans with road games.

“The NBA is going to be a new and different strategy for us,” DeAngelo said. “The NBA boasts the most diverse fan audience of the four major sports. I think it’s going to really help us authentically provide access to fans in a way that we’ve never been able to do before.”

Some of those plans include sweepstakes, fan recognition and celebration and finding ways potentially with travel packages and promotions with community outreach to get fans engaged early on, DeAngelo said.

“Both Allegiant and the Pistons organization share a core value of commitment and service to Michigan and our communities,” Brenden Mallette, senior vice president of corporate partnerships and engagement for the Pistons, said in a statement.

Allegiant sees a different impact with its relationship with the Golden Knights. The airline doesn’t have any particular travel packages for home games, but it is seeing a noticeable trend in local fans booking tickets to away games.

“We do increasingly line up our flights with road games,” DeAngelo said. “So people can fly away with VGK. In our marketing emails we keep a running calendar of when the Golden Knights will be in Arizona … or when they play the Blues in the St. Louis area… all markets that we serve in-and-around that people can hit the road to go cheer on the Golden Knights.”

Allegiant also is keeping an eye on the ever-changing pro sports landscape in Las Vegas, where reports of teams potentially locating here have become commonplace.

Billionaires Wes Edens and Naseef Sawiris are in exclusive negotiations with Major League Soccer about potentially netting a pro soccer team in Las Vegas. The Oakland Athletics have been exploring potential relocation for over a year. And the Oak View Group’s planned $3 billion project includes an NBA-ready arena.

“We’ve had talks with all of them,” DeAngelo said.

The television exposure of both the Raiders and Knights is another plus for Allegiant, DeAngelo said.

“It’s reaching tens of millions of eyeballs each and every time that game comes on throughout the nation,” DeAngelo said.

“The stadium goes without saying. Sunday Night Football’s intro with glamour shots of Allegiant Stadium and iconic Las Vegas and the Bellagio fountains, as well as the branding and signage seen throughout the game, above the Al Davis Memorial Torch, above the scoreboard. Those are the reason we do sponsorships at that scale.”