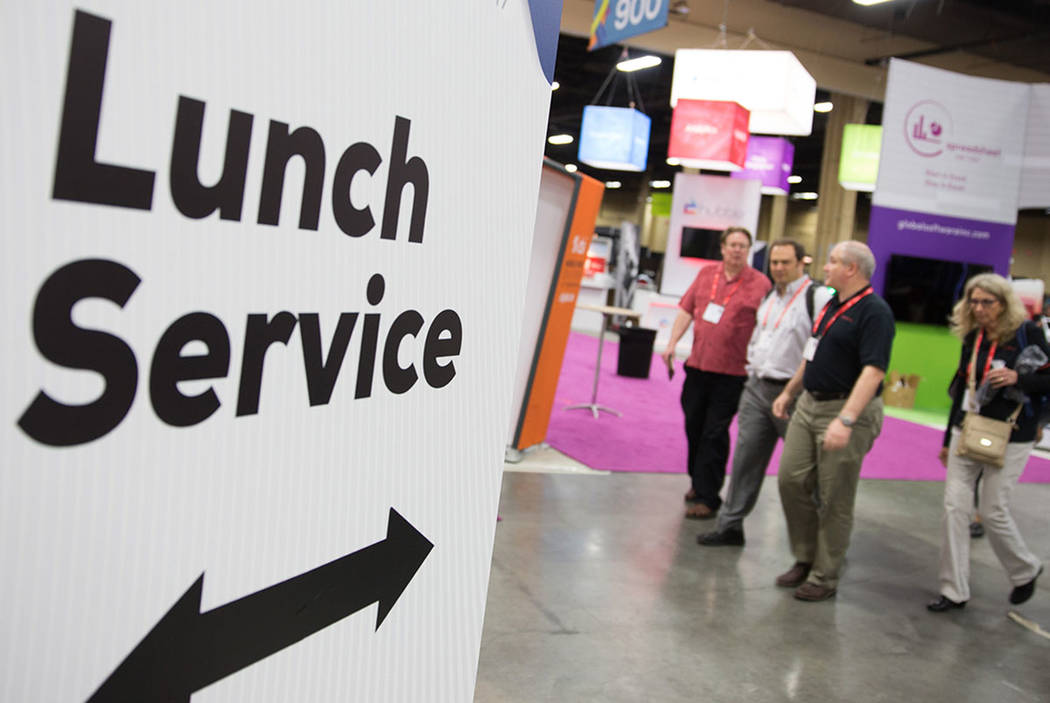 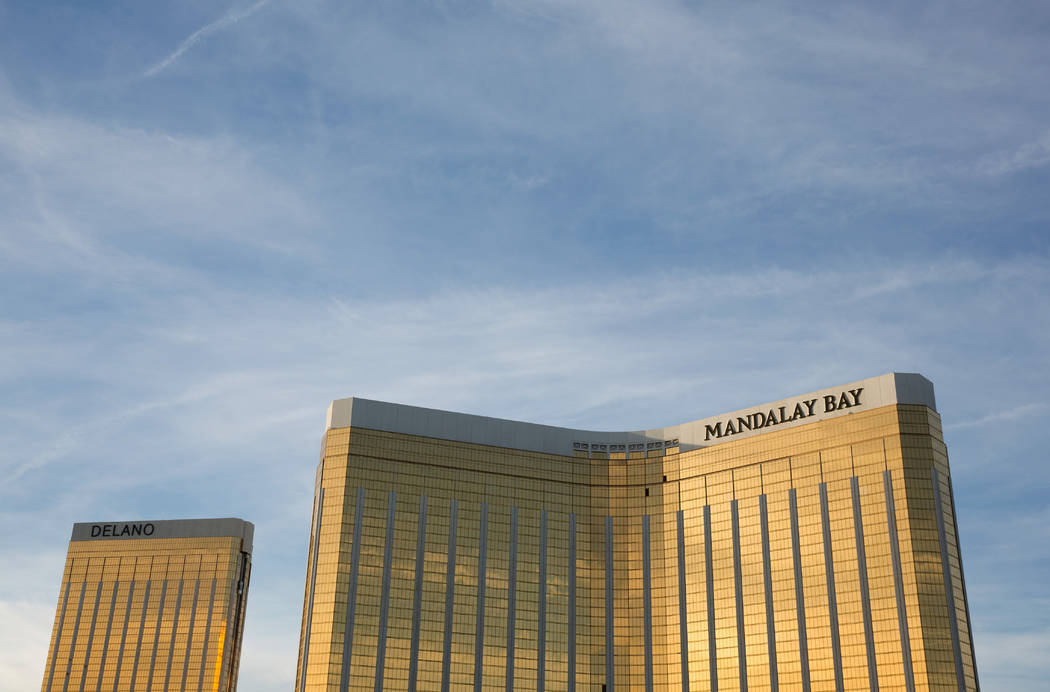 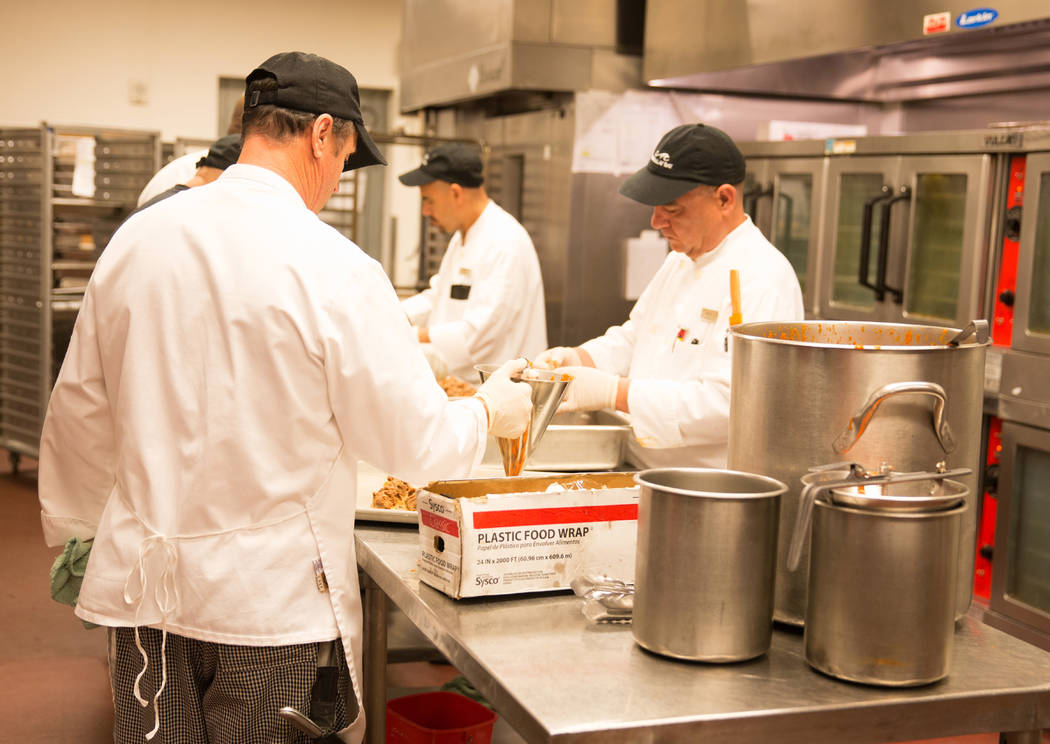 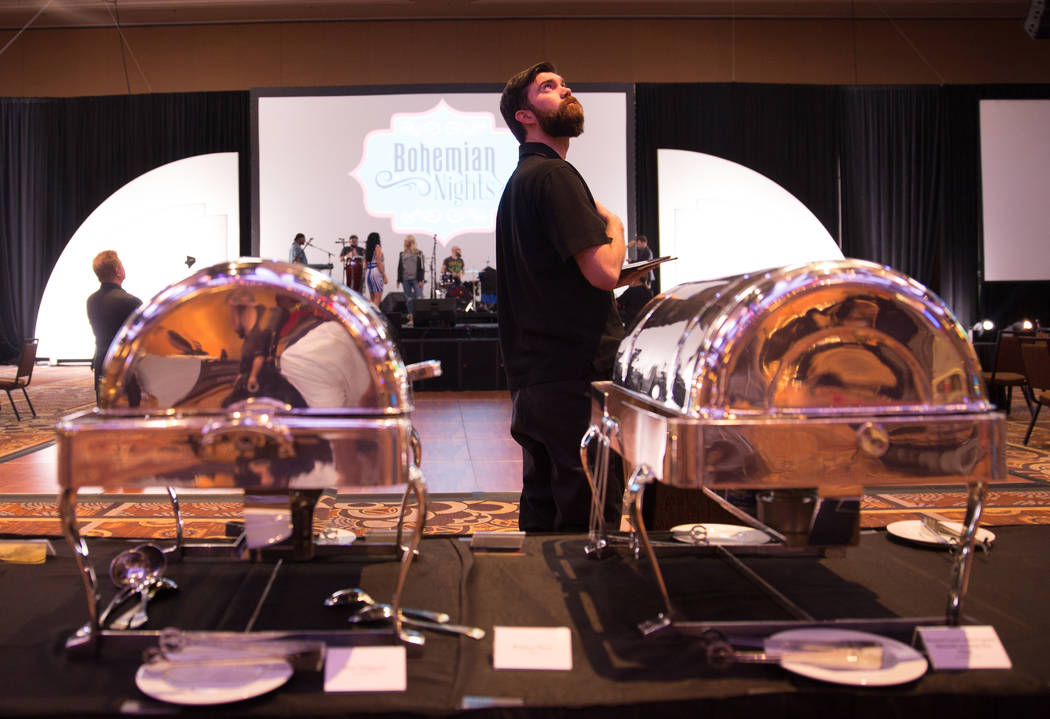 Too many cooks don’t necessarily spoil the broth.

Not when you are preparing a three-course lunch buffet featuring tomato and mozzarella salad, braised short ribs and amaretto tiramisu for 17,000 people, a number slightly greater than Boulder City’s population.

To get the food prepared and into the 520,000-square-foot ballroom on time requires 400 chefs and line cooks working in three kitchens. They are helped by 475 waiters and 300 stewards moving tens of thousands of plates, silverware and glasses around Mandalay Bay, which boasts the fifth-largest convention center in the U.S. by space.

The Mandalay Bay catering division handled four events exceeding 10,000 people last year, helping it to surpass the $100 million mark in revenue, a record high. That is equivalent to $275,000 a day in catering revenue. The catering group served approximately 1.5 million meals in 2016.

Las Vegas hospitality companies like MGM Resorts International, the owner of Mandalay Bay, are striving to grab a larger share of the lucrative group convention and trade show segment to drive profit growth as gaming revenues stagnate. Groups and trade shows require many ancillary services, such as catering and audiovisual production, that can be highly profitable.

MGM Chief Executive Officer Jim Murren told investors during a February conference call that he expects slightly more than 19 percent of all rooms booked at MGM hotels this year in the U.S. to be occupied by trade show or group event attendees, up from about 18 percent in 2015.

MGM recently won a multiyear contract with Microsoft to host its annual corporate event, which will bring up to 30,000 technology professionals to Las Vegas in the summer. The event will take place at several MGM resorts in Las Vegas, including Mandalay Bay.

Organizers of group conventions and trade shows try to maximize networking and educational meetings over the course of a few days by hosting all events under one roof, including catered receptions and meals.

The Mandalay Bay Convention Center handled about 600 conventions and trade shows last year. While the groups and trade shows exceeding 10,000 people may grab headlines, they are like slot machine winnings. They don’t happen that often.

The bread and butter are group conventions and trade shows with fewer than 250 people, accounting for 80 percent of such bookings at Mandalay Bay. They include not just corporate meetings, but also reunions and parties.

Mandalay Bay sources 70 percent of its food needs within a radius of 400 miles, including cheese from California and Utah.

With rooms scattered around the convention center, getting the food to the right location often requires some wheels.

The chef drives a vehicle resembling a golf cart that pulls 6-foot-high metal boxes filled with hot food. The boxes are attached to one another like a cargo train.

Golf carts are also used to transport stacks of glassware, plates and silverware to the area known as the “back of house,” a partitioned area next to the event room where the cooks, stewards and waiters operate.

For plated dinners, the process is set up a like a factory, with plates moving along on the equivalent of an assembly line. Line cooks place the food in the correct position as the plates pass by. Waiters in dark gray striped suits move in succession, carrying the plated meals to the table and returning to the back of the house for the next round.

Individual meal requests — such as vegan or gluten-free — can slow down the process, said Stephanie Glanzer, vice president of sales for Mandalay Bay and Delano Las Vegas. Her team will work with clients to pinpoint the number of people who really need specialized meals.

“Banquet kitchens are not equipped to do a la carte ordering for small, little numbers. Individualized client requests for that large of a group really does jeopardize the function,” said Glanzer, who has worked for MGM since 1998.

Groups and trade shows often book their dates two to three years out. The Mandalay Bay Convention Center has 90 percent of its business for the year booked by January 1.

That doesn’t mean organizers have finalized everything. The convention services and catering units have to be prepared like an emergency room to react to last-minute changes.

“It is nothing to get a request from a client to add a reception for 100 people for the next day,” said Glanzer.

Clients often want their catered events to be “unique,” and that could mean themed evenings in a ballroom, outdoor dining by the Mandalay Bay pool and beach area or a reception at its Shark Reef Aquarium, said Glanzer.

A large portion of its trade show and group business — especially the larger events — comes from the technology industry, she said.

On a recent Wednesday, Mandalay Bay catered an event for 3,000 people to close out a four-day technology industry trade show. The evening’s theme this year was ‘Bohemian,’ with a section of the room turned into a German beer garden with pretzels and various craft beers.

“Craft cocktails are a hot thing with groups right now,” said Glanzer. “It is a nice opportunity for team building.”

Alcohol accounted for 16 percent of the $100 million in catering revenue, she said.