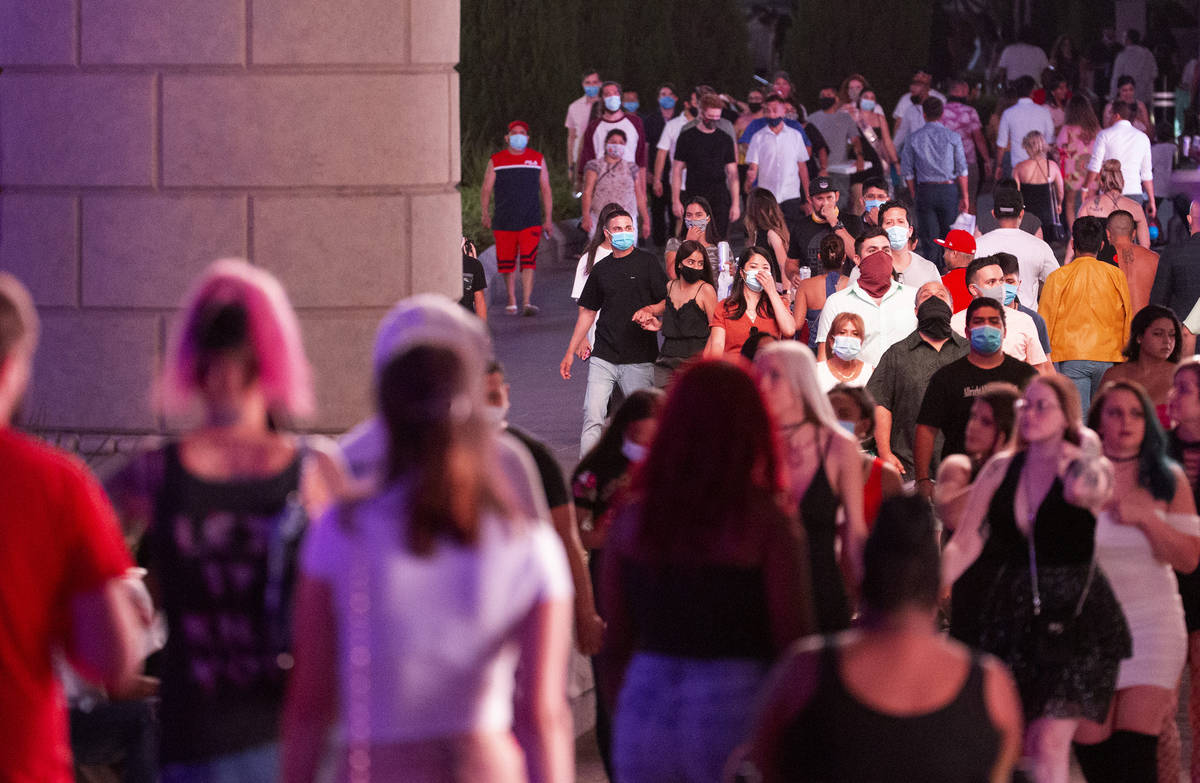 Visitors pass by The Forum Shops at Caesars on the Strip during Labor Day weekend on Saturday, Sept. 5, 2020, in Las Vegas. (Ellen Schmidt/Las Vegas Review-Journal) @ellenkschmidttt 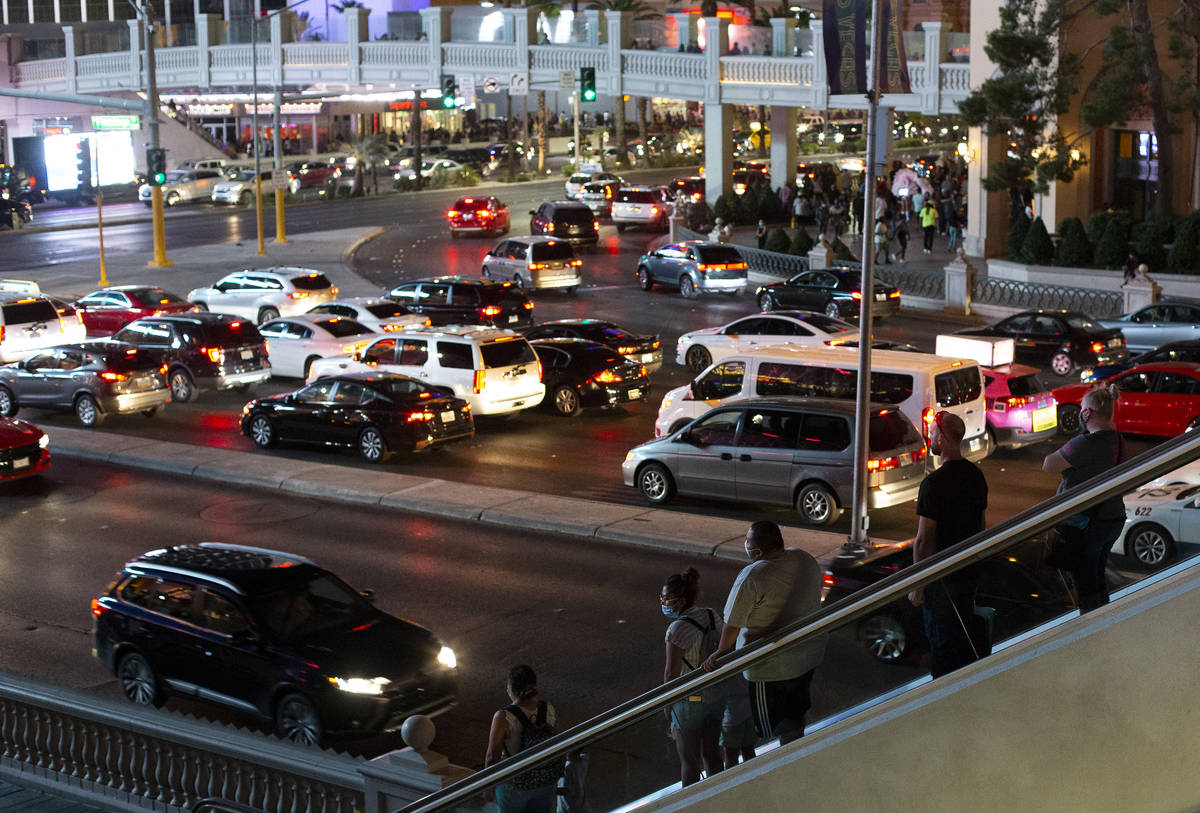 Both pedestrian and motorist traffic picked up on the Strip during Labor Day weekend on Saturday, Sept. 5, 2020, in Las Vegas. (Ellen Schmidt/Las Vegas Review-Journal) @ellenkschmidttt 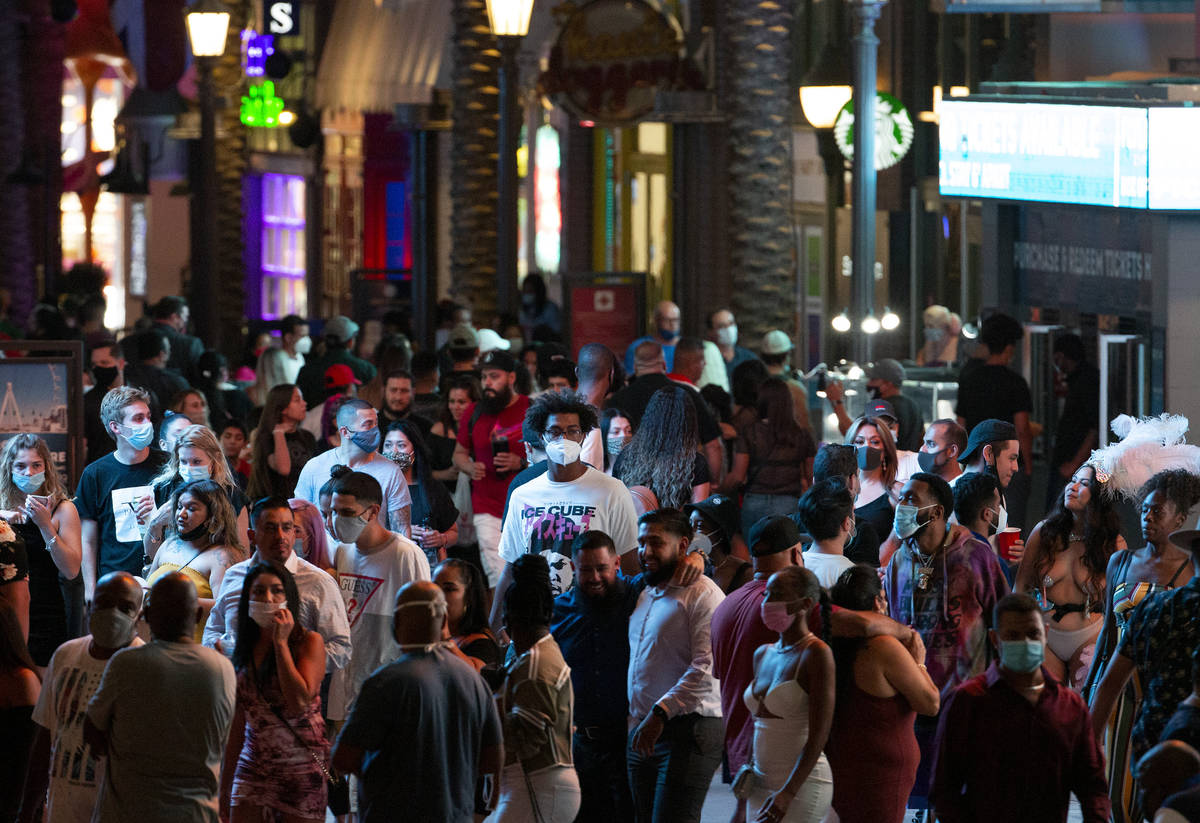 The LINQ is crowded with visitors during Labor Day weekend on Saturday, Sept. 5, 2020, on the Las Vegas Strip. (Ellen Schmidt/Las Vegas Review-Journal) @ellenkschmidttt 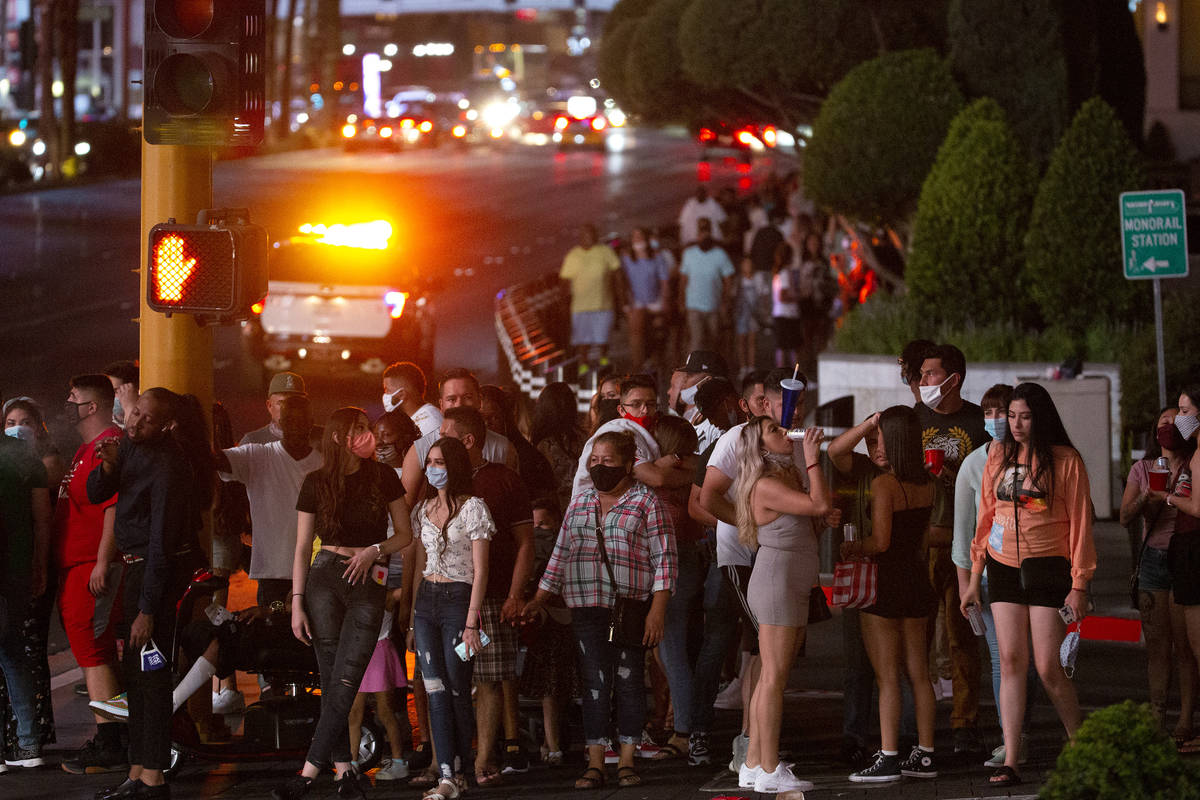 Several fights over the weekend along Las Vegas’ tourist corridor have caused at least one casino operator to increase both security measures and room rates in an effort to quell the violence.

On Friday alone, downtown area command arrested 28 people and issued 27 citations. Spencer declined to offer details on where the incidents took place and did not offer figures for Saturday, Sunday and Monday.

“People coming here to have fun and take part in the festivities … we welcome you,” she said. “For those of you coming here to prey on the tourists or residents of this community, it will not be tolerated.”

As occupancy rates have plummeted post-pandemic, casino operators have had to offer low room rates and travel incentives to more customers in their database, instead of solely targeting high-value customers.

According to data from the Las Vegas Convention and Visitors Authority, the average daily room rate in Las Vegas was $104.39 in July, down 18 percent from the previous year.

“Cheap retail rates for the hotel rooms (and) free rooms are going to the players that have never had free rooms in Las Vegas,” Mullen said. “They’re going deeper in their database to get players who aren’t as lucrative, because it’s better just to get a body in there.”

Mullen said maintenance calls due to the destruction of rooms are at an all-time high at some high-end properties.

“This is uncharted waters for Las Vegas,” he said.

Videos of violence among tourists have been circulating on social media. A video titled “Fight in ENCORE HOTEL LAS VEGAS LABOR WEEKEND 2020,” posted to YouTube on Sunday, amassed nearly 31,000 views by Tuesday evening.

The video shows people within a hallway swinging at other guests and casino security as a crowd watches. The visitors eventually disperse, leaving behind a velvet rope toppled to the ground.

Wynn Resorts Ltd. spokesman Michael Weaver said the company is increasing its room rates and investment in its security workforce and procedures after a fight broke out at Encore over the weekend. The company has no record of injuries from the incident.

Weaver said the changes are being made to ensure Wynn’s two Las Vegas properties, Wynn Las Vegas and Encore, “maintain the guest experience standards for which (they) are known.”

Changes include more security throughout the resort and additional uniformed Metropolitan police officers. The properties will also scan all hotel room keys at elevator entrances so that only registered guests are admitted to the hotel towers.

“An otherwise calm holiday weekend was marred by a disruption created by non-hotel guests in the Encore casino,” Weaver said. “Security officers and others currently prevent groups of unrelated guests from gathering to ensure appropriate physical distancing; with their increased presence, Wynn security will allow no exceptions.”

According to Hotels.com, room rates at Wynn Resorts started at $197 for a stay Saturday, Aug. 22. Rates jumped to $349 on Aug. 29, then to $499 the Saturday of Labor Day weekend. Room rates this Saturday start at $319, according to the company’s website.

Wynn CEO Matt Maddox told investors last month the company is focusing on promotions and casino revenue, as nongaming revenue was down about two-thirds in the second quarter.

“We’re doing everything we can to get heads in beds,” Maddox said, adding that the company didn’t plan to “cut (its) way to better margins” at the risk of hurting its brand, culture and company.

While it’s easy to pinpoint low room rates as the cause of Las Vegas properties’ spike in violence, solving the issue isn’t as easy as bumping prices.

Mullen said resort executives will need to manage a balancing act between setting prices high enough to keep out less-desirable guests, but low enough to maintain a decent occupancy rate amid the pandemic.

It’s a struggle that’ll likely go on for months. Las Vegas room rates aren’t expected to bounce back to 2019 levels until the return of conventions, concerts and other forms of entertainment.

“Several of our higher-end profile clients say their high-end guests are done coming until this is under control,” he said. “They’re scared to walk outside their rooms, and don’t feel safe on elevators or on the casino floors themselves. It’s a bad look. … You can really severely put a tarnish on Las Vegas.”

A spokesperson for MGM Resorts International said there were “no major incidents involving guest melees on our properties this past weekend.”

Las Vegas Sands Corp. spokeswoman Alyssa Anderson said the company has a “very robust and progressive security program in place,” and declined to provide further information on The Venetian and Palazzo’s security protocols.

A spokesman for Boyd Gaming Corp. declined to comment when asked if the company had also seen violence erupt at its properties. Spokespeople at Red Rock Resorts Inc. and Caesars Entertainment Inc. did not return a request for comment.