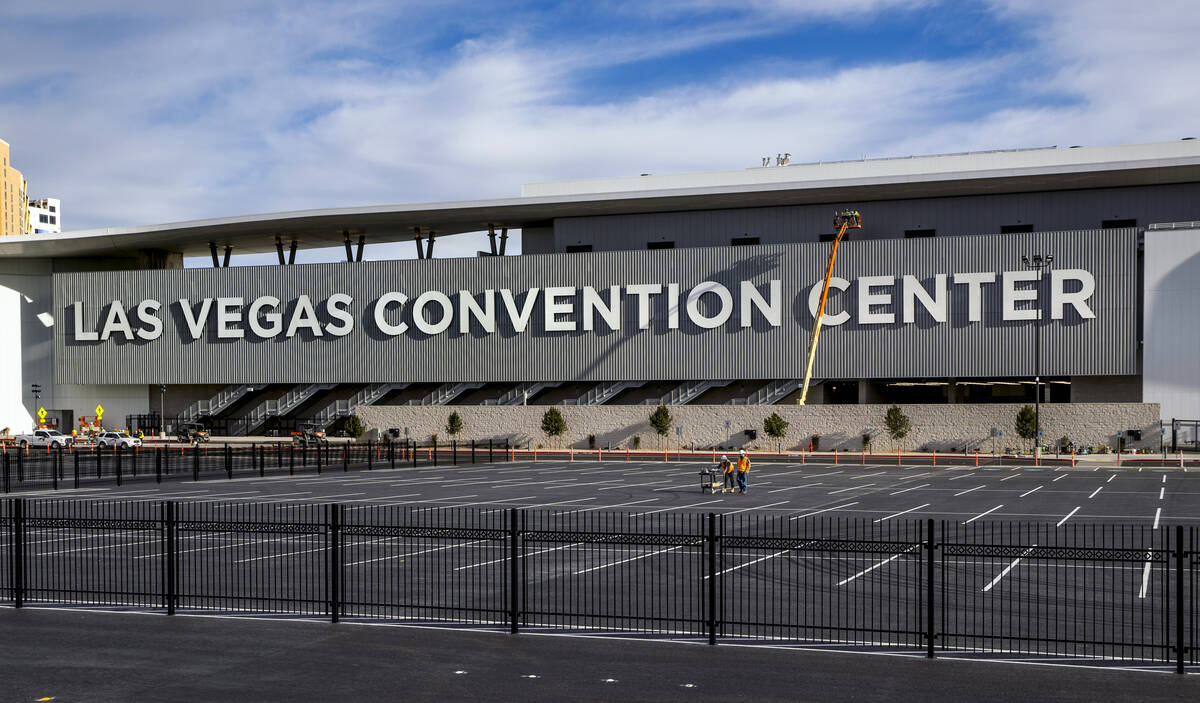 The lettering is now done on the side of the Las Vegas Convention Center West Hall on Wednesday, Dec. 9, 2020, in Las Vegas. (L.E. Baskow/Las Vegas Review-Journal) @Left_Eye_Images

The Las Vegas Convention and Visitors Authority board of directors on Monday approved a $398 million budget for the city marketing organization’s 2022-23 fiscal year.

Clark County Commissioner Jim Gibson, who serves as secretary on the board, underscored the importance of the marketing budget to Las Vegas’ success as a destination.

“What this budget reflects is the reality that we need to continue to fight to hold our place and to advance ourselves,” he said. “I think that the things that are the priority listed in the budget expenditures are appropriate. We need to remember that we’re not the only destination that is fighting hard to come back and exceed prior performances. I think this budget manages us in a way that does just that for ourselves.”

The board’s vote came during a special telephonic meeting that lasted just 11 minutes. No one from the public raised any objection to the spending plan during a hearing before the approval.

LVCVA Chief Financial Officer Ed Finger detailed the major expenditures in a brief presentation prior to the vote. The budget, he said, represents “a return to normal-sized financial activity for the LVCVA.” A $273 million operations budget will include $94 million for advertising and $27.5 million to sponsor special events that usually draw hundreds of thousands of people to the city.

The budget will have a $74.9 million capital project fund, most of which will be dedicated to the LVCVA’s $597.6 million renovation of the North, Central and South exhibition halls of the Las Vegas Convention Center. The 2022-23 fiscal year also will include going into debt with $50.8 million dedicated to debt service to repay $150 million in bond money that will be borrowed to pay for the first portion of the renovation that will begin next year following a major convention in March.

The LVCVA has scheduled construction around major conventions so that they won’t have to go elsewhere during the building process. A major part of the renovation will be construction of a climate-controlled corridor linking the North, Central and South halls.

The convention authority is projecting it will receive $306.2 million in room tax revenue in the fiscal year as tourist visitation is expected to return to normal and conventions and meeting traffic will get closer to normal with full recovery expected in 2023-24.

The LVCVA is expected to get a taste of what high-revenue room taxes looks like next week when LVCVA researchers report April visitation figures. Room-tax revenue is expected to be around $31 million from April, surpassing the previous high of $29.3 million collected in October 2021. In April, South Korean band BTS performed four sold-out concerts at Allegiant Stadium; more than 50,000 people attended the five-day National Association of Broadcasters trade show; and the NFL Draft brought three days of high visitation to Las Vegas.

The board expects to spend around $2 million to maintain the Las Vegas Monorail and the Convention Center Loop underground transit system. Monorail expenditures will be paid for exclusively with farebox receipts and not room tax revenue, Finger said.

The LVCVA will pay $30.9 million in salaries and benefits for the fiscal year. The organization expects to add two employees to the payroll in the next fiscal year, bringing the total number of employees to 414.

While the budget vote was unanimous, board member and Las Vegas Mayor Carolyn Goodman said she voted in favor even though she opposes any debt financing of the Monorail and the The Boring Co’s underground transit system to locations off the Las Vegas Convention Center campus.

The Boring Co. has said it would build the citywide loop system itself and collect fares from people who use it once it is open.