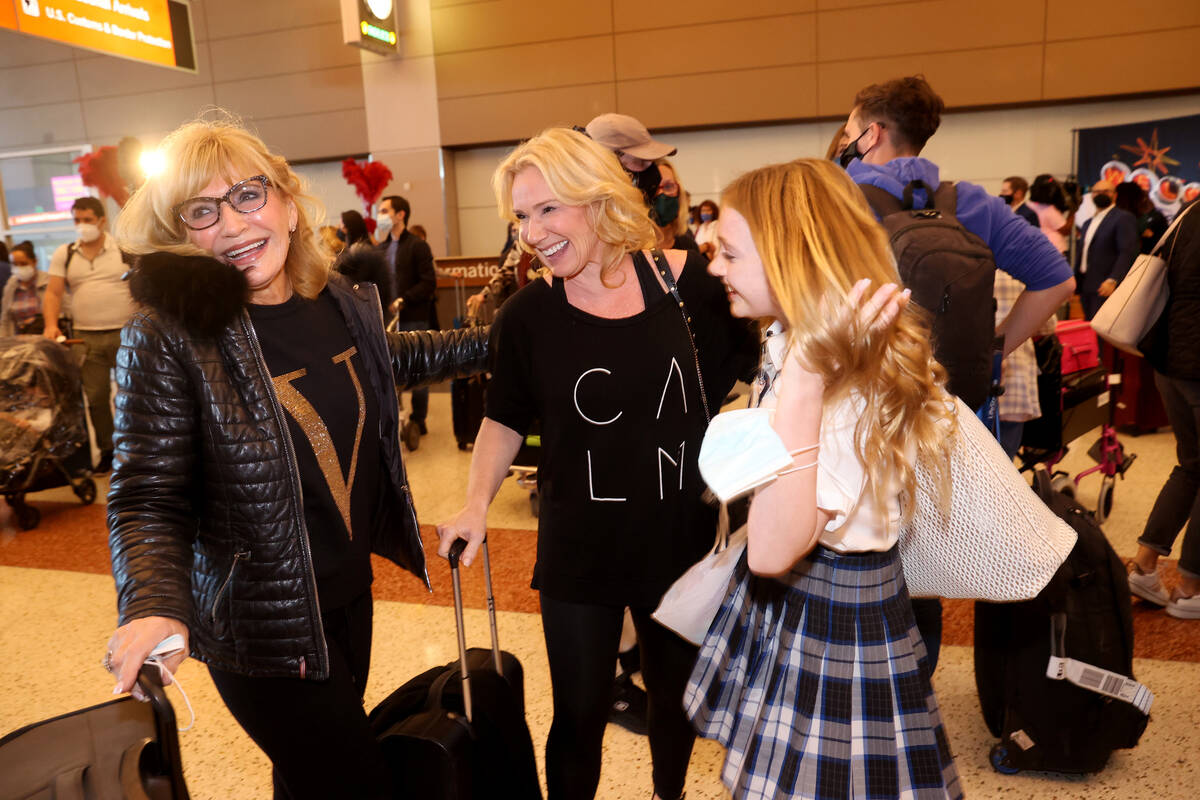 Annemarie Banks reacts to seeing her daughter Joanna Banks and granddaughter Caroline McGill, 12, of Las Vegas after arriving from London at McCarran International Airport in Las Vegas Monday, Nov. 8, 2021. It was the first transcontinental flight to land at McCarran since March, 17, 2020. (K.M. Cannon/Las Vegas Review-Journal) @KMCannonPhoto 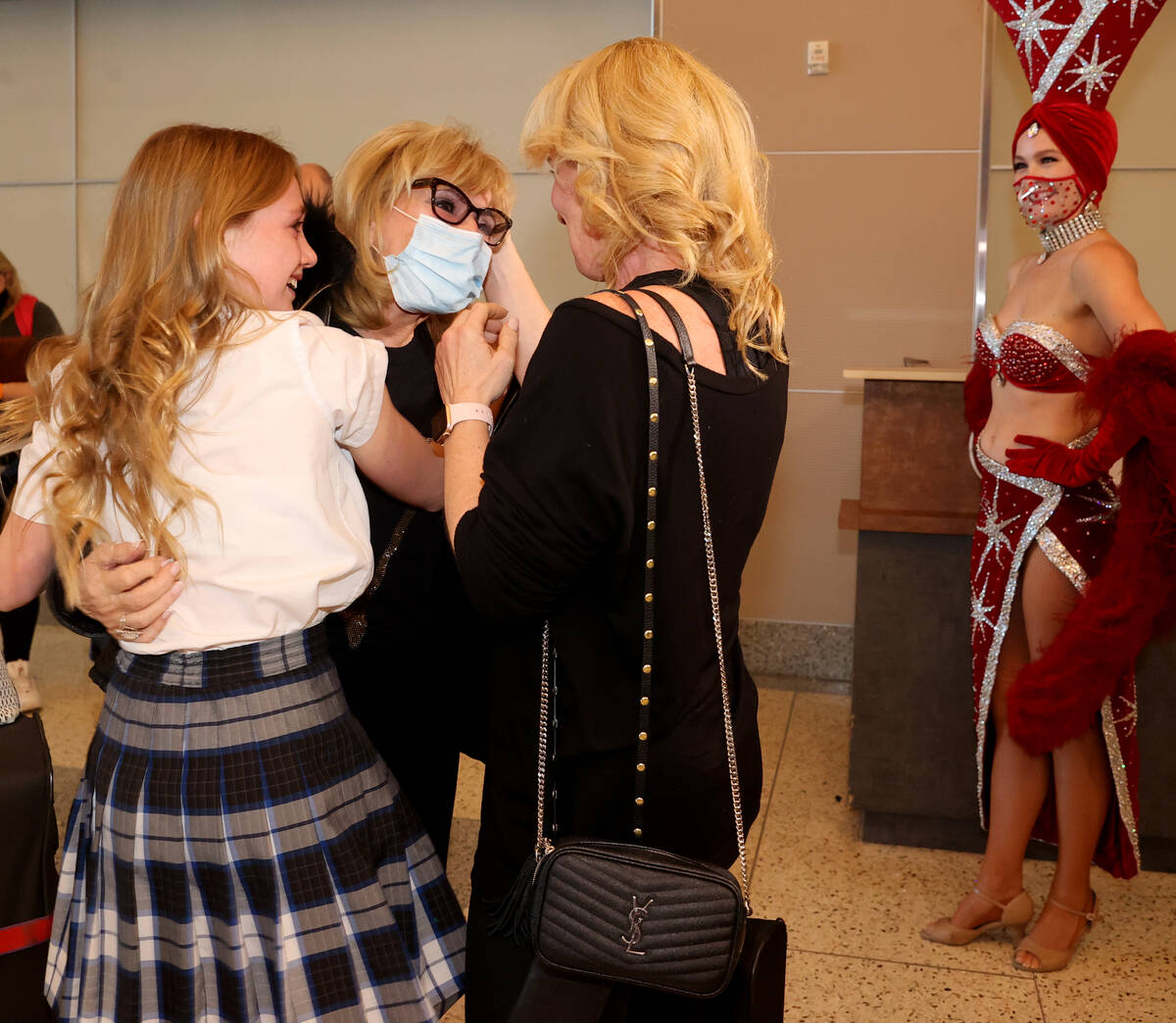 Caroline McGill, 12, and her mother Joanna Banks of Las Vegas hug their mother/grandmother Annemarie Banks who had just arrived from London at McCarran International Airport in Las Vegas Monday, Nov. 8, 2021. It was the first transcontinental flight to land at McCarran since March, 17, 2020. (K.M. Cannon/Las Vegas Review-Journal) @KMCannonPhoto 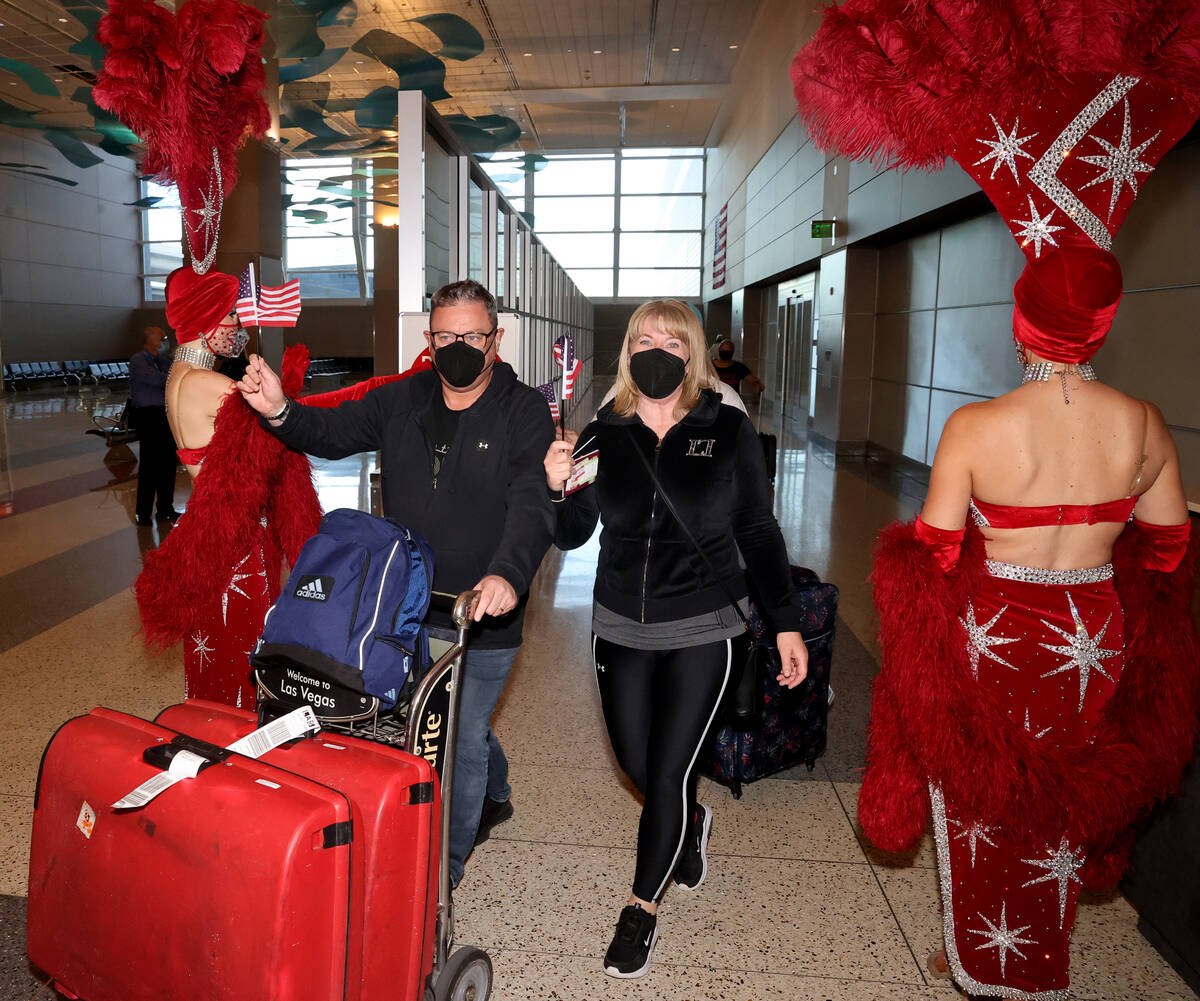 Ian and Trudy Davies arrive at McCarran International Airport in Las Vegas Monday, Nov. 8, 2021, from London. It was the first transcontinental flight to land at McCarran since March, 17, 2020. (K.M. Cannon/Las Vegas Review-Journal) @KMCannonPhoto 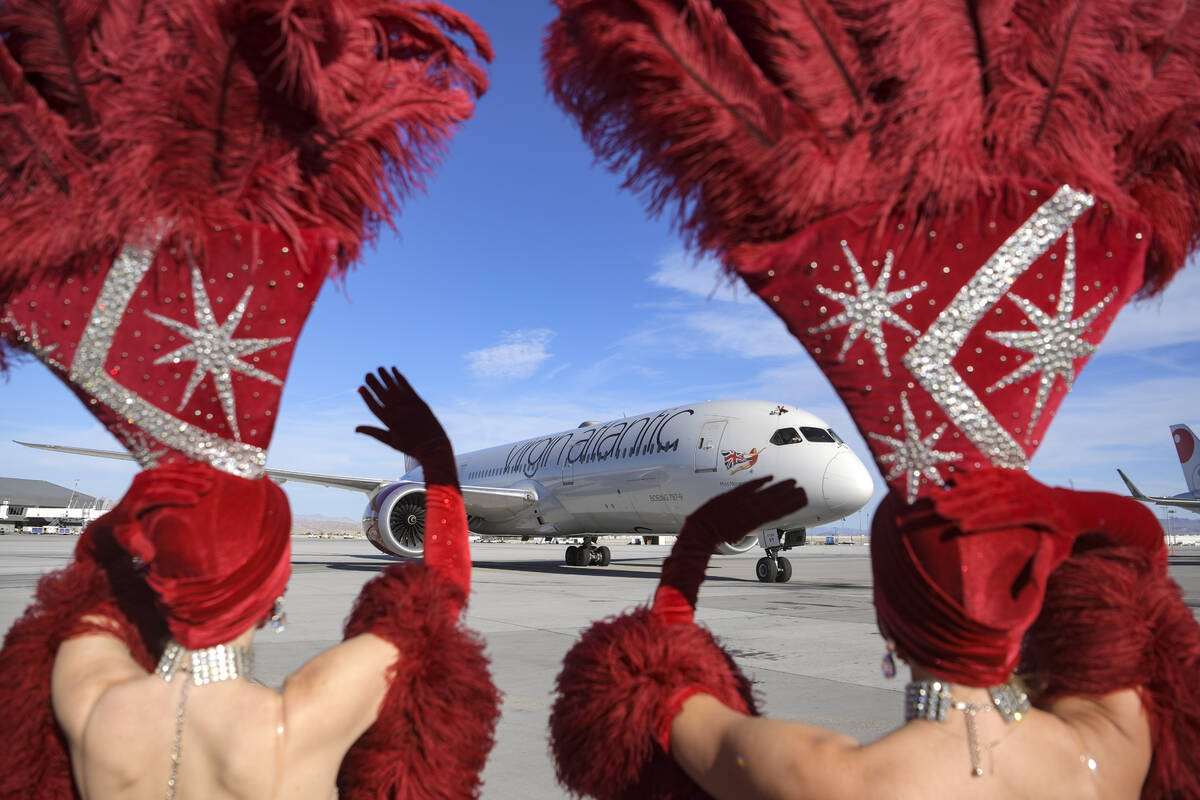 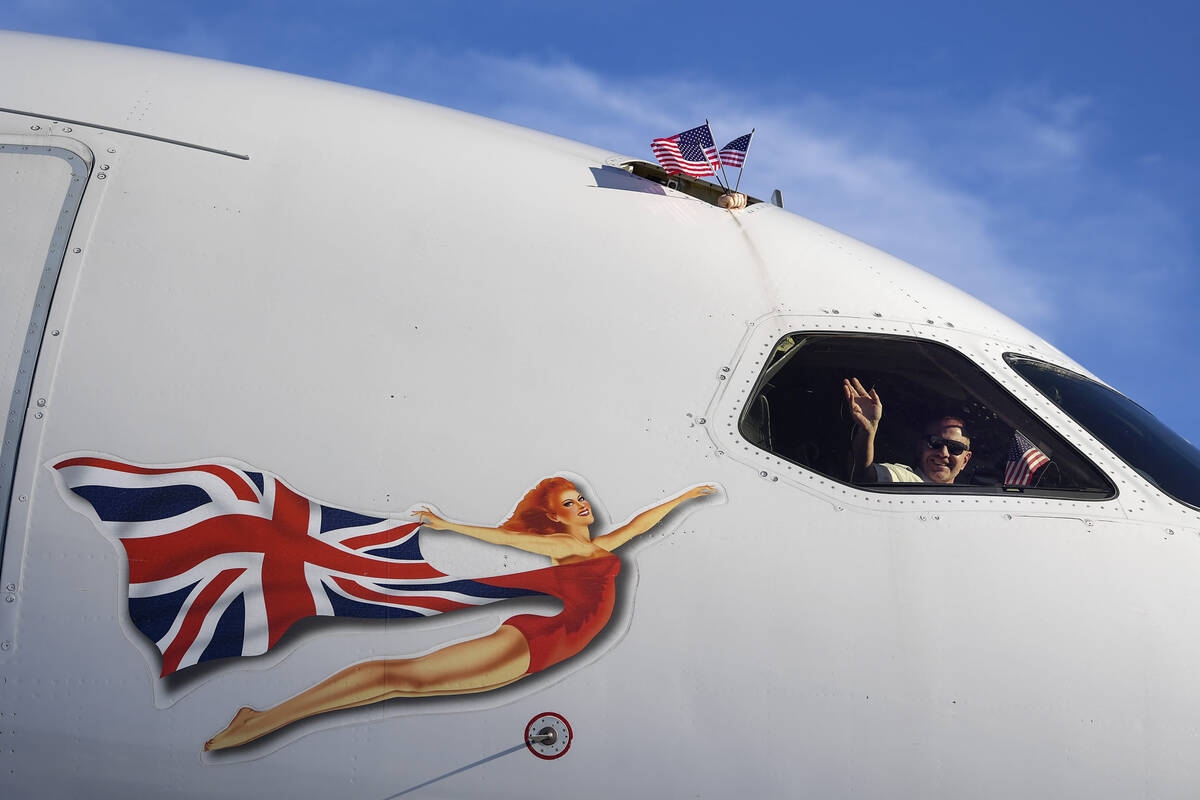 The first transatlantic flight in almost 20 months landed in Las Vegas on Monday afternoon, greeted by a pair of waving showgirls on the airfield of McCarran International Airport.

The flight arrived in Las Vegas as the U.S. fully reopened its borders with Mexico and Canada on Monday and lifted restrictions on travel that covered most of Europe. The end of the restrictions could provide a boost for the Las Vegas economy and a travel industry decimated by the pandemic.

The Boeing 787 carrying upward of 250 passengers touched down just before 2:30 p.m., marking the end of the nearly 11-hour Virgin Atlantic Airways Flight 155 from London’s Heathrow Airport.

Clark County Department of Aviation Director Rosemary Vassiliadis said she and other area tourism officials have been counting down the days for the return of overseas flights, ever since they halted on March 17, 2020 — St. Patrick’s Day.

“It was a long time coming,” Vassiliadis said, standing on the airfield with the Virgin plane just behind her. “We have been anticipating this day.”

She said that as Las Vegas opened up in 2020 and U.S. visitors began returning, there was a sense that the “pent-up demand was going to carry over into international (travel).”

It’s well documented that international travelers stay longer and spend more than most domestic travelers, but the volume of flights and passengers directly from foreign countries shows the potential impact of the new travel policies.

According to McCarran statistics, 3.8 million foreign passengers arrived at or departed from Las Vegas’ airport in 2019 with 27 air carriers offering scheduled service sometime during the year. Eight more carriers offered a small number of charter flights.

H. Fletch Brunelle, vice president of marketing for the Las Vegas Convention and Visitors Authority, said travelers from England, like the ones who arrived Monday, represent 13 percent of international travelers coming to Las Vegas.

“No. 3, just behind Canada and Mexico,” Brunelle said. “Fantastic to see this market come back.”

Vassiliadis said the full recovery of international travel probably won’t be seen until sometime around April, as the carriers fill out their summer flight schedules.

The LVCVA was on hand at McCarran to greet the international travelers and hand out Las Vegas-themed swag to passengers that arrived on the long-awaited flight.

The return of the transcontinental traveler also has a positive impact on business travel, Brunelle said.

“In a normal year, pre-pandemic, we had about 6.5 million business travelers to the destination and of that 15 percent to 17 percent was international,” Brunelle said. “When we look at CES, some of our shows are actually 30 to 40 percent international. CES in particular, we usually have different flights that are brought in on a charter basis. Air France actually announced they’re going to bring in some charters for CES this year. Same thing with El Al (Israel) and Korean Airlines.”

The immediate impact of that was seen Monday as English resident Carlo Zoccali landed in Las Vegas to attend the IMEX America trade show that begins Tuesday at the Mandalay Bay Convention Center. Zoccali said he had been attending the show for seven years before the COVID-19 pandemic halted his annual trip to Southern Nevada.

“It’s been a long wait,” Zoccali said. “It (IMEX) starts tomorrow, so great timing. … It’s been hard not coming back year-on-year, so it’s great to be back. Other than meeting people, it will be great to get back to the tables and obviously the food and the party lifestyle Las Vegas offers every single time I come.”

The new rules lift restrictions on air travel from some countries dating back to the early days of the pandemic — as long as travelers have proof of vaccination and a negative COVID-19 test.

“It was really easy,” Zoccali said of the process. “Everything was seamless. It’s fantastic to be back and doing everything we can to travel again.”

Some vaccines not approved

The United States will accept travelers who have been fully vaccinated with any of the shots approved for emergency use by the World Health Organization, not just those in use in the U.S. That’s a relief for many in Canada, where the AstraZeneca vaccine is widely used.

But millions of people around the world who were vaccinated with Russia’s Sputnik V, China’s CanSino or other shots not approved by the World Health Organization will not be able to travel to the U.S.

Airlines are preparing for a surge in activity — especially from Europe — after the pandemic and resulting restrictions caused international travel to plunge.

The 28 European countries that were barred under the U.S. policy that just ended made up 37 percent of overseas visitors in 2019, according to the U.S. Travel Association.

As the reopening takes effect, carriers are increasing flights between the United Kingdom and the U.S. by 21 percent this month over last month, according to data from travel and analytics firm Cirium.

Aside from the business impacts there is also the human side to factor in.

Many family members haven’t seen one another since the pandemic began but with overseas flights resuming, many happy reunions are bound to occur as was evident Monday when some passengers were greeted with bear hugs and shrieks of excitement by waiting family members.

Among those was Las Vegas resident Scott Allison whose parents, Rosie and Andrew Allison, flew in on the Virgin flight. Allison said he hadn’t seen his parents in almost two years and he was eager to see them in person.

“I’m so happy, we’ve done video calls every week for the last almost two years,” Allison said. “It’s great we (Allison and his husband) moved here last year from the Bay Area, so we get to show them our new house and our new neighborhood.”