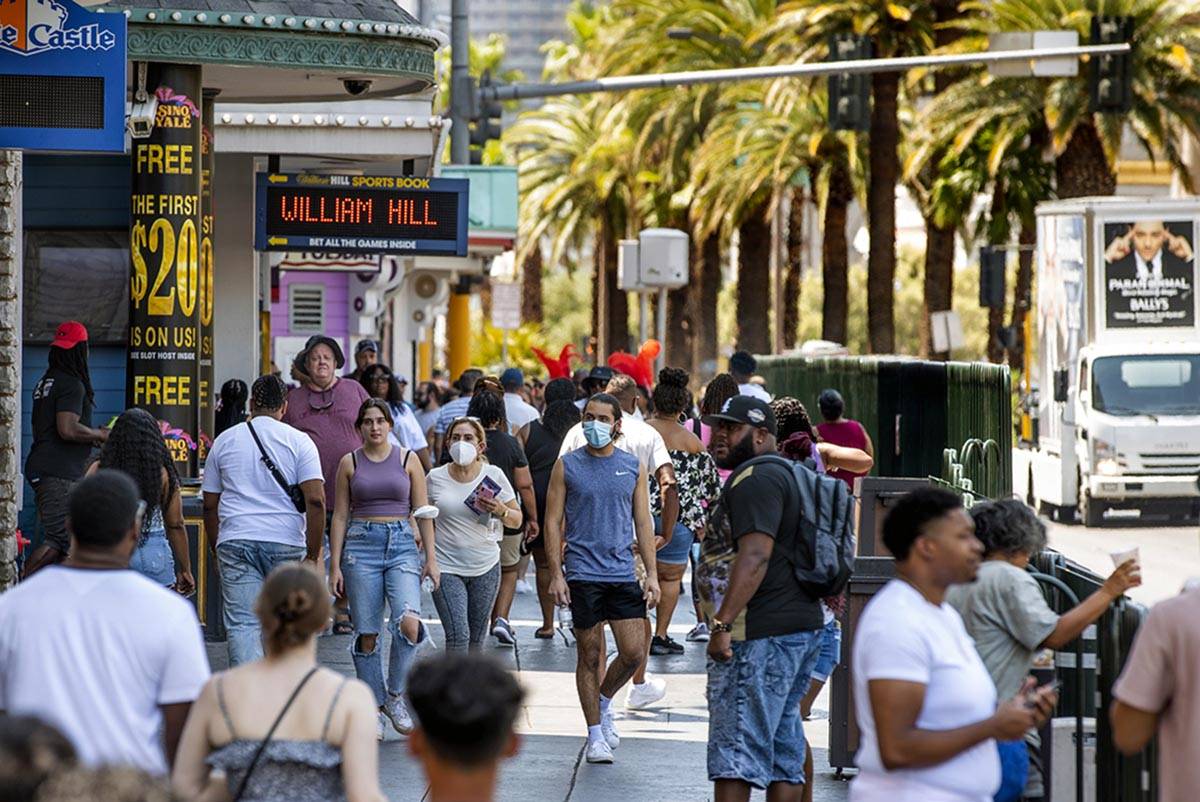 A reported just released estimates that the pandemic resulted in a $34 billion drop in total economic input when considering direct, indirect and induced sources — direct visitor spending, suppliers and vendors, and employee spending. People walk along the Strip near The Venetian, most not wearing masks anymore on Friday, July 16, 2021, in Las Vegas. The Southern Nevada Health District is now recommending that both those vaccinated against COVID-19 and unvaccinated people wear masks in crowded indoor public places. (L.E. Baskow/Las Vegas Review-Journal) @Left_Eye_Images 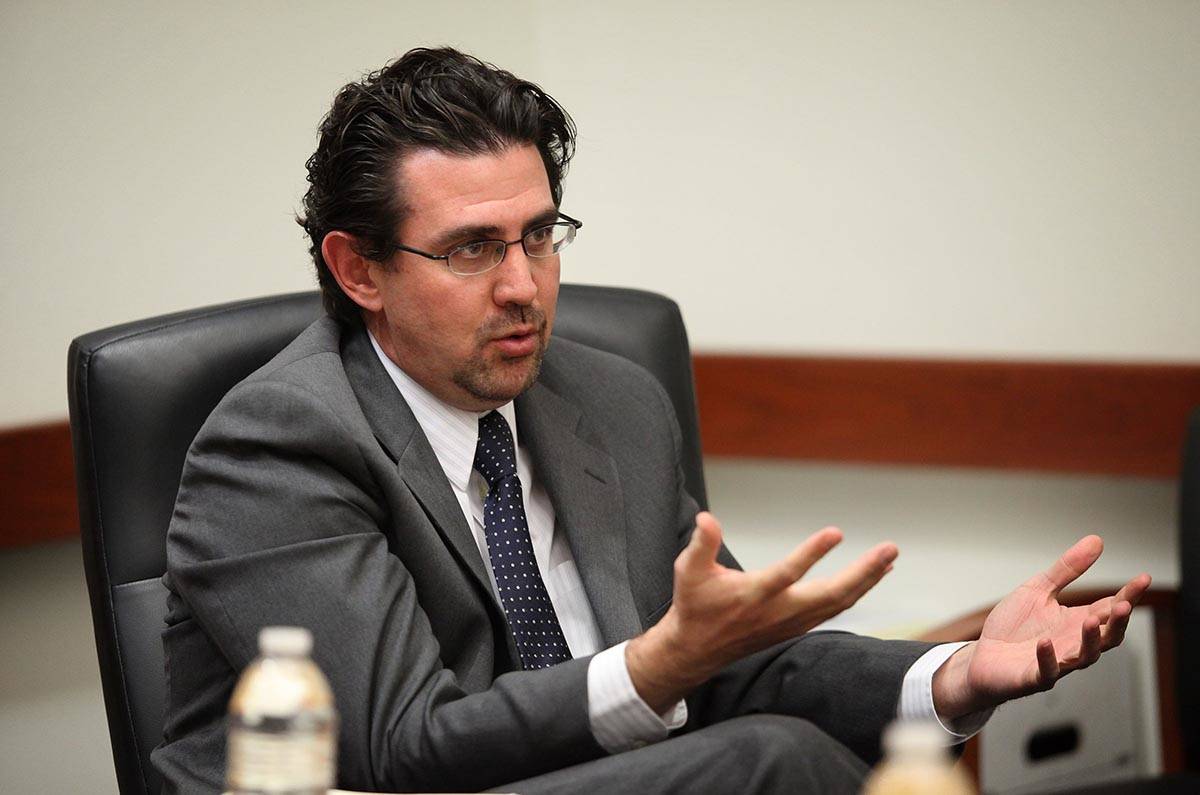 A new report confirms what most of us already knew — that the COVID-19 pandemic decimated Southern Nevada’s tourism economy to the tune of $34 billion.

But the 22-page report commissioned by the Las Vegas Convention and Visitors Authority and authored by Jeremy Aguero, a principal at Las Vegas-based Applied Analysis, quantifies just how much damage was done.

Aguero estimates that the pandemic resulted in a $34 billion drop in total economic input when considering direct, indirect and induced sources — direct visitor spending, suppliers and vendors, and employee spending.

“The COVID-19 pandemic left an indelible imprint on the Southern Nevada tourism industry and the broader regional economy,” Aguero said in the report’s executive summary.

“Compared to recent recessions, the COVID-19 recession’s magnitude was unprecedented in its depth and speed. … While the economic losses in 2020 were material, it is worth noting that many of the economic conditions and shortfalls have persisted into early 2021,” the report said.

Between the details Aguero outlined in his report and fresh data suggesting that Southern Nevada is seeing setbacks in the COVID fight, the immediate future isn’t particularly bright.

The uptick in cases and the renewed mask mandates, both locally and in other parts of the country, could lead to another slowdown for all U.S. travel in the short term, UNLV hospitality professor Amanda Belarmino said.

“However, I would hope that the new mask mandate will assuage some of those fears,” Belarmino added. “Nobody does hospitality like Las Vegas, and our COVID-19 response has been second to none. We know the casino-hotels had previously implemented successful mitigation measures, and as those return, we will continue to host guests safely.”

MGM Resorts International is requiring employees to provide proof of vaccine or be subject to regular COVID-19 testing, a policy that has the backing of the Culinary Local 226, which represents some 24,000 MGM workers in Las Vegas.

In a letter to employees, MGM President and CEO Bill Hornbuckle again urged employees to get vaccinated, and he sounded the alarm about what might happen if the region’s COVID-19 situation continues to worsen.

“This is another disheartening step backward when we should be focused on continuing our recovery,” Hornbuckle wrote, referencing the reimplemented mask mandate. “In addition to the heart-wrenching thought of more illness and death, I fear that progressively more restrictive measures, including a return to social distancing and capacity restrictions, could be around the corner if we continue on this path. This would be a significant blow to our community, industry and economy.”

“Our region’s low vaccination rate is putting us back on the path to overrun hospitals, unnecessary deaths, fewer tourists, and possible furloughs and layoffs. None of us want that,” Hornbuckle added. “After the pain endured by so many these past 16 months — and the tremendous progress made in 2021 — I can think of no more damaging scenario for us as a community.

California this week implemented a policy similar to MGM’s for state employees and health care workers. And in San Francisco, some bars have started or are planning to require patrons to provide proof of vaccine or a recent negative COVID-19 test.

Belarmino from UNLV said she doesn’t anticipate a widespread application of requiring vaccination records at hospitality venues in Southern Nevada.

“Unlike schools, hospitals, and government buildings, it is hard for companies to implement and puts an undue burden on service employees. It might also create a disparate impact based on who is unvaccinated in any given community,” Belarmino said. “My hope would be that the silver lining to the delta variant is that the unvaccinated will consult their doctors about the safety of the vaccines for their personal health conditions and, for those for whom it is safe, they will get vaccinated.”

Some of the highlights of Aguero’s report:

■ The COVID outbreak hurt Las Vegas more than any other city. The Bureau of Labor Statistics reported that the city has a heavy reliance on tourism, making it particularly susceptible to events that affect travel, entertainment and dining. An estimated 28.6 percent of Las Vegas’ workforce are in tourism-oriented jobs. The next closest, Orlando, Florida, is at 22 percent. They are followed by San Diego, 14 percent; Los Angeles, 13 percent; with Atlanta, Phoenix and Chicago at 11 percent each.

■ In 2020, Southern Nevada’s unemployment rate average was the highest among large metropolitan areas at 14.7 percent and was the fifth highest among more than 300 metro areas in the United States. Two of the areas with higher unemployment rates were Atlantic City and Kahului, Hawaii, two smaller metropolitan areas with larger shares of leisure and hospitality employment than Southern Nevada.

■ Convention visitation vanished as a result of health department policies recommending against the gathering of large groups. A record 6.6 million convention attendees arrived in Las Vegas in 2019. With 11 consecutive months of no convention attendance, the meetings industry has just begun to come back.

In 2020, there were 1.7 million convention attendees, thanks to strong turnouts at CES, World of Concrete, the Shooting, Hunting, Outdoor Trade show and ConExpo-Con/Agg in the first three months of the year. After March 17, 2020, there was nothing until June 2021.

■ Occupancy rates and average daily room rates at resorts plummeted to 2015 levels after they had been built up following the Great Recession.