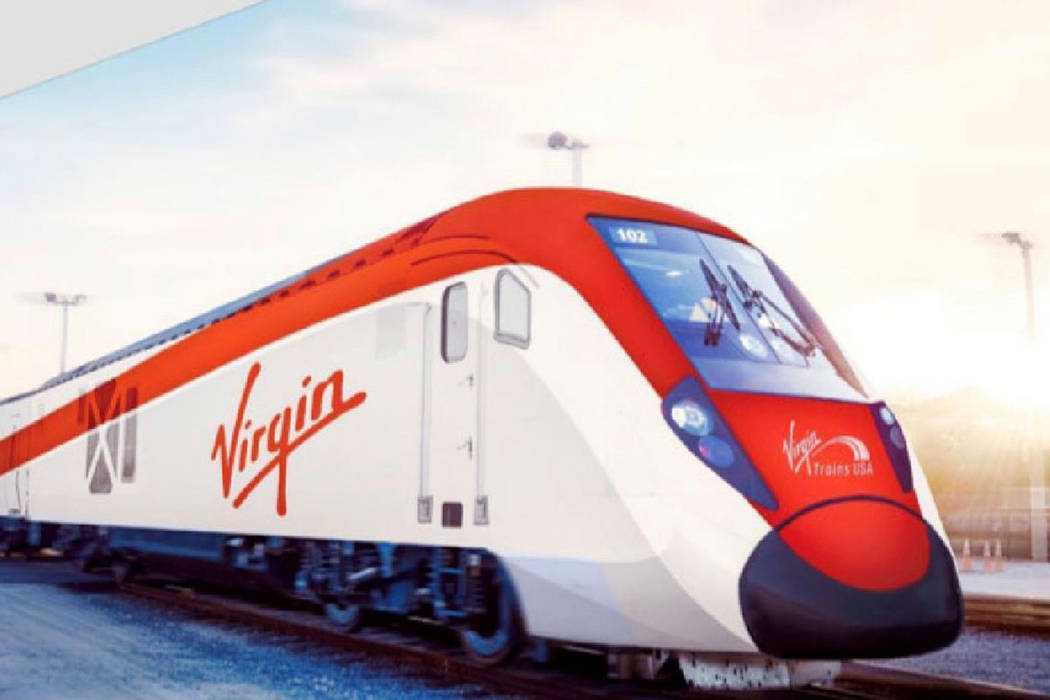 Clark County officials vowed their support Tuesday of the financing plan Virgin Trains is set to submit to the state for its Las Vegas to Southern California high speed rail project. (Photo provided)

While construction on the long-talked about high-speed train between Las Vegas and Southern California is slated to begin next year, work probably won’t start in Nevada until the following year.

Virgin Trains USA could break ground in the second half of 2020 on the 170-mile route between Southern Nevada and the Victor Valley area of Southern California, according to Ben Porritt, Virgin Trains spokesman.

Tina Quigley, vice president of business strategy for Virgin Trains, said work on the project will begin in California, where the bulk of the rail line will be located.

“They’ll probably start in about five different areas when construction starts,” Quigley said. “Those five areas will probably be in California.”

With just 35 miles of the route running through Southern Nevada, Nevada-related construction is likely to begin the following year, Quigley said.

“It wouldn’t be until early-t0-mid 2021 that the Vegas station and the work in Vegas would start,” she said.

The project is expected to be completed in 2023.

The projected $4.8 billion project can’t begin construction work until the “record of decision” is received by the Federal Railroad Administration, according to state Department of Business Director Terry Reynolds.

“They (Virgin Trains) expect to receive their record of decision from the U.S. Federal Railroad Administration in August,” Reynolds said.

Virgin plans to secure equipment and materials for the project ahead of time to be ready to begin construction soon as that occurs, Reynolds said.

With plans still being finalized, early designs call for the majority of the tracks to run between the northbound and southbound lanes of Interstate 15 through southern California. That route would shift to the east side of I-15 once the track reaches the Nevada border.

The track will continue to run on the east side of I-15 until it reaches the planned Las Vegas station, to be located on Las Vegas Boulevard between Blue Diamond and Warm Springs roads, Quigley said.

The tracks will either go under or over highway interchanges, Quigley said, thereby limiting chances for vehicle or pedestrian interactions.

That’s been an issue in South Florida where Virgin Trains and Brightline operate a rail line that runs through densely populated areas between Miami and West Palm Beach, with multiple intersections along the route. The line was found to be the most dangerous rail line in the U.S. with over 40 people killed by their trains since 2017, according to an Associated Press analysis of Federal Railroad Administration data.

None of the deaths were caused by crew error or faulty equipment, according to law enforcement and federal reports, AP’s story revealed. The majority were suicides, with others involving motorists, pedestrians or bicyclists who didn’t accurately judge the trains’ speed and ignored bells, gates or other warnings.

All the plans are contingent on bond approval Virgin is seeking from both Nevada and California.

Reynolds said the matter could be up for approval as early as the January Department of Business meeting, but more likely will come up at the February meeting.

Though he declined to speculate on what the board’s decision would be, Reynolds said the Virgin team was meeting all the requirements the board has set.

If the bonds are approved during either the January or February meetings, Virgin’s projected construction time line would stay on track, Porritt said.