RJ App
Vegas News, Alerts, ePaper
OPEN
Visiting the Strip this summer? You're not the only one 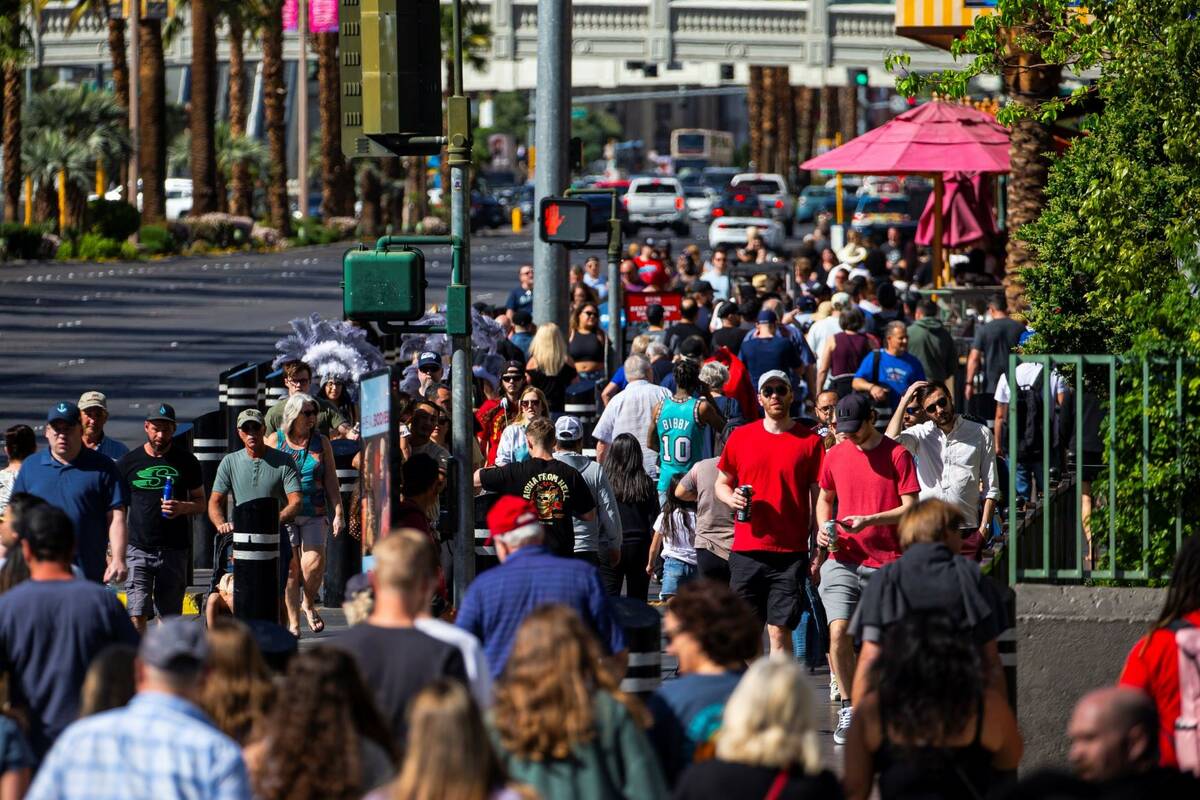 American travelers are more concerned about high prices than COVID-19 this summer, according to a sentiment survey conducted in mid-May by Longwoods International, a tourism market research firm. Almost 60 percent of travelers say rising gas prices will impact or greatly impact their travel plans in the next six months.

Still, pent-up demand to travel appears to be winning out. Nine out of 10 Americans have plans to go somewhere in the next six months and about half have plans within the next two months, according to the survey. Often those plans are changed to be regional, drivable destinations or to spend less on ancillary purchases such as food and beverage and souvenirs.

“One of the things we need to understand is that Americans see travel as a right,” said Amir Eylon, president and CEO of Longwoods International. “It’s almost a necessity ingrained in us to go travel, to go do something somewhere. That helps explain some of the psyche of why, despite all this, we are so determined to make sure we’re taking our trips this summer.”

That could be a win for Las Vegas because of its options. Analysts say the city can appeal to tourists on any budget with the volume of available hotel rooms and entertainment sources. They can also easily find flights to Las Vegas or drive from the other regions such as Southern California and Arizona.

“Despite the dramatic increases in gas prices, pent-up demand for travel seems to be winning out at this point,” she said.

And summer programming may entice tourists to choose Las Vegas as their vacation spot by offering one-of-a-kind experiences, such as marquee residencies from Silk Sonic and Luke Bryan, UFC fights and the Chelsea FC vs. Mexico’s Club América soccer match at Allegiant Stadium in July.

“Those types of things programmed during the summertime, along with the over-the-top pools and dayclubs, all these popular attractions in the summer space really help drive the momentum that Las Vegas sees over the summer,” Nelson-Kraft said.

Brendan Bussmann, an industry analyst and founder of Las Vegas-based B Global, said the region’s strong international travel is important to a full recovery. While Harry Reid International Airport has its international routes back, federal government requirements to provide proof a negative COVID-19 test one day before traveling to the States may be a hindrance for international travelers but a benefit to domestic ones.

“Until that 24-hour mandate is dropped, I don’t see international (visitation) ticking up significantly,” Bussmann said. “But also that goes to those domestically that want to go somewhere else. It becomes an easier option to go to a Vegas, Hawaii, or even a Puerto Rico than it is to go to London or France or anywhere else because of the requirements to get in and out of the country — whether you’re a citizen or not.”

It remains to be seen if pent-up demand will continue beyond summer.

Some experts speculate about the possibility of the economic cycle turning to a recession, given inflation and the impact of the Russia-Ukraine war, and wonder if time will show whether Las Vegas is truly “recession proof,” as old-school thinking suggests.

Alan Feldman, distinguished fellow for responsible gaming at the UNLV International Gaming Institute, said that it’s more likely that Las Vegas will see a delay in the effects compared with other destinations.

“In terms of experience, inflation usually affects Vegas but later,” Feldman said. “It’s almost like Vegas is inflation resistant. Not inflation proof, but you may see some hesitancy in travel to other markets before it sets in here.”

Nelson-Kraft said that Las Vegas has a habit of bucking national trends, such as through its relatively quick rebound from the lowest point of the COVID-19 pandemic. The area often can lean on its variety to fare better than other tourism spots during difficult economic cycles.

“Vegas still remains very much a value proposition because of the quality of the resorts, the sheer volume of entertainment and attractions and then the ease and convenience of getting here,” she said.