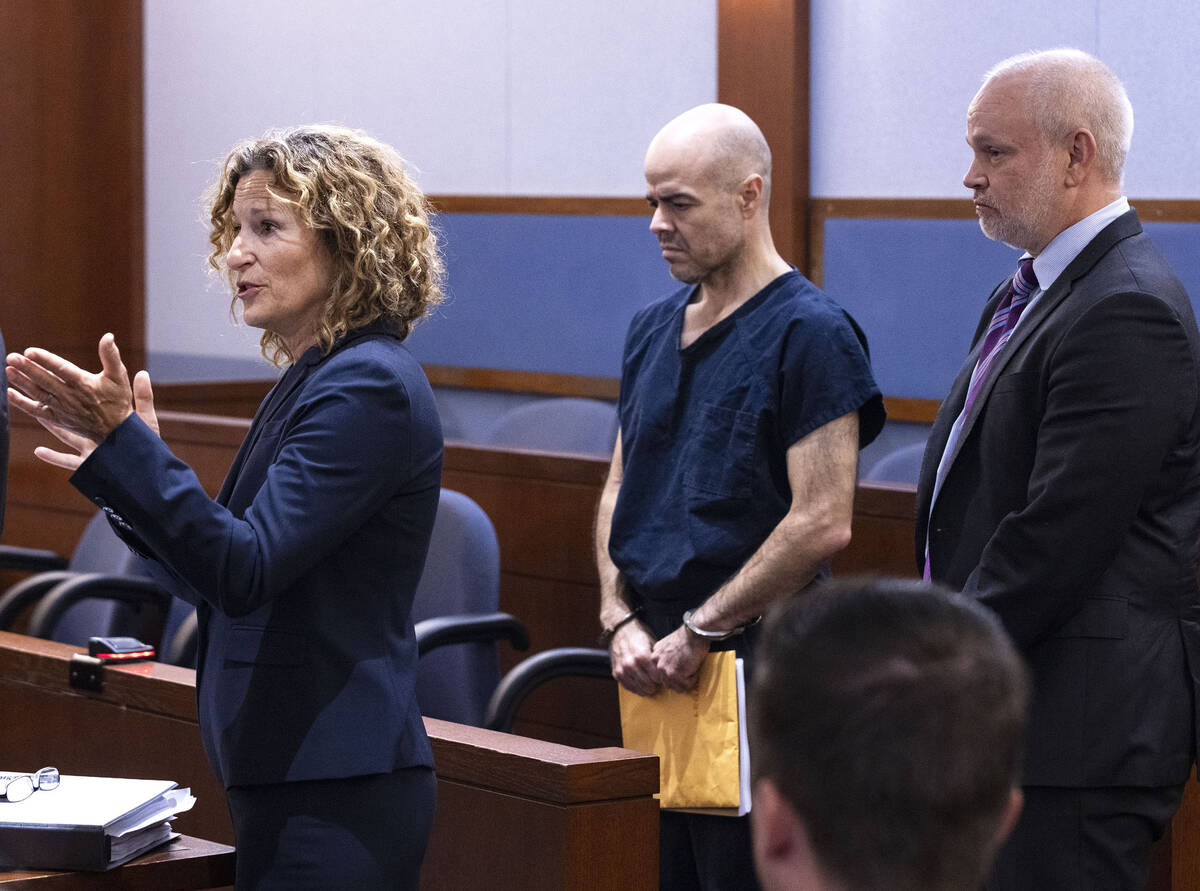 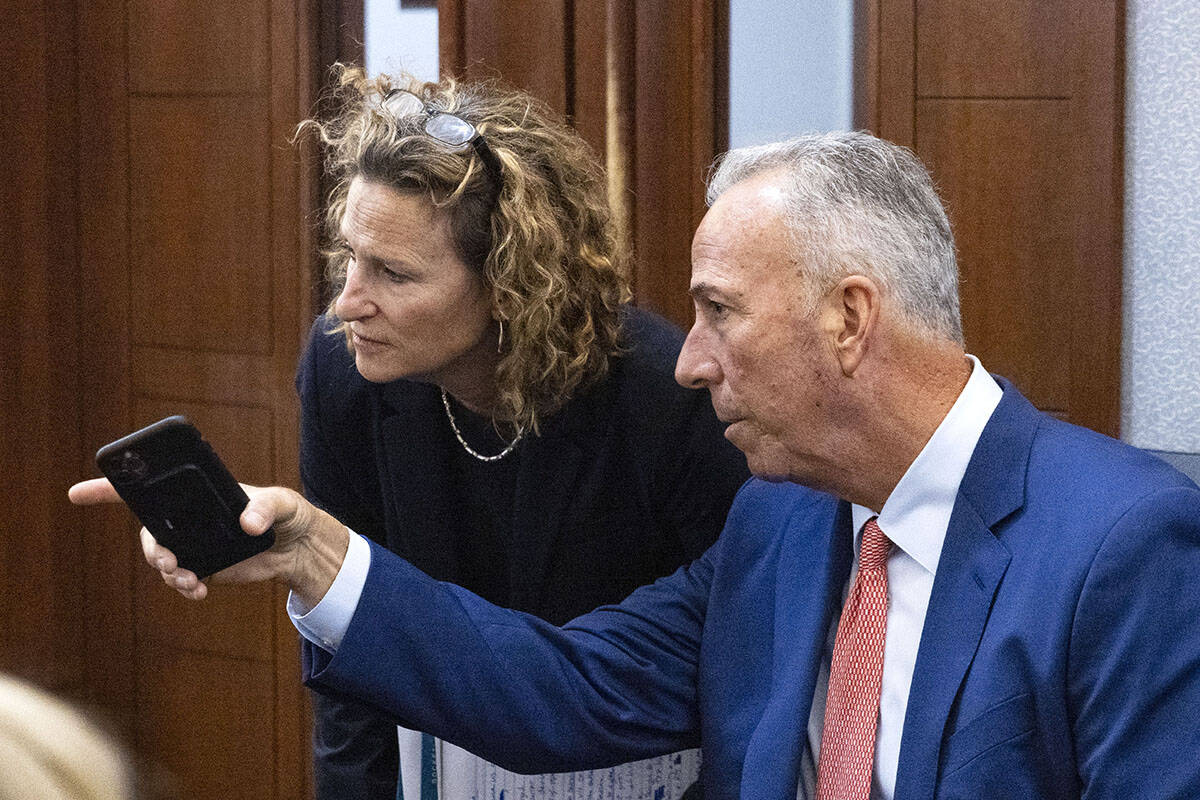 Attorney Ashley Kissinger, left, representing the Review-Journal, discuss with District Attorney Steve Wolfson, prior to the start of the hearing in the Robert Telles case regarding the RJ's motion at the Regional Justice Center, on Wednesday, Sept. 28, 2022, in Las Vegas. The RJ's motion is to prevent Metro from disseminating Jeff German's information from his seized personal devices. (Bizuayehu Tesfaye Las Vegas Review-Journal) @btesfaye 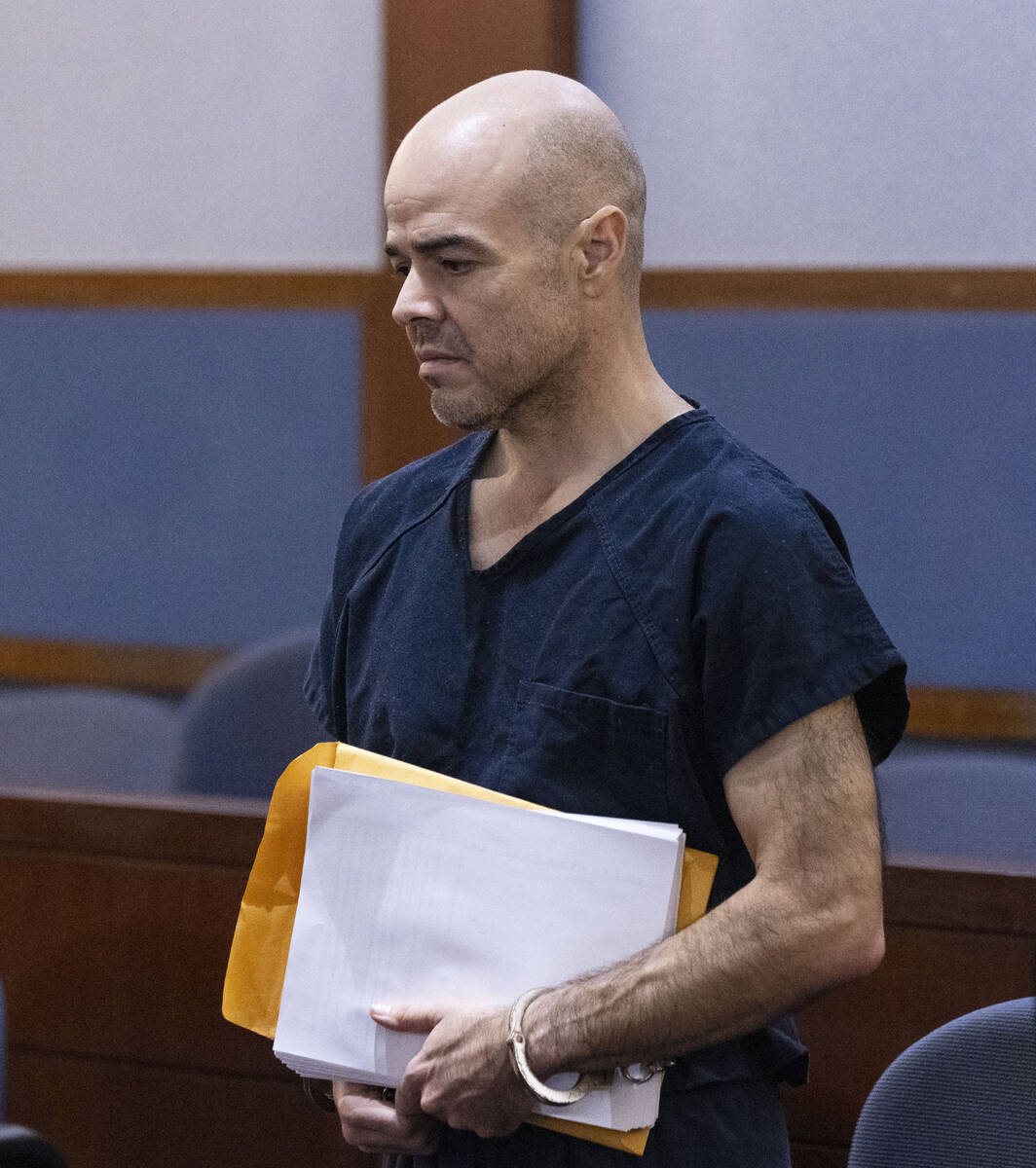 Outgoing Clark County Public Administrator Robert Telles, charged with murder in the death of Las Vegas Review-Journal investigative journalist Jeff German, appears in court during the hearing in his case regarding the RJ's motion at the Regional Justice Center, on Wednesday, Sept. 28, 2022, in Las Vegas. The RJ's motion is to prevent Metro from disseminating Jeff German's information from his seized personal devices. (Bizuayehu Tesfaye Las Vegas Review-Journal) @btesfaye 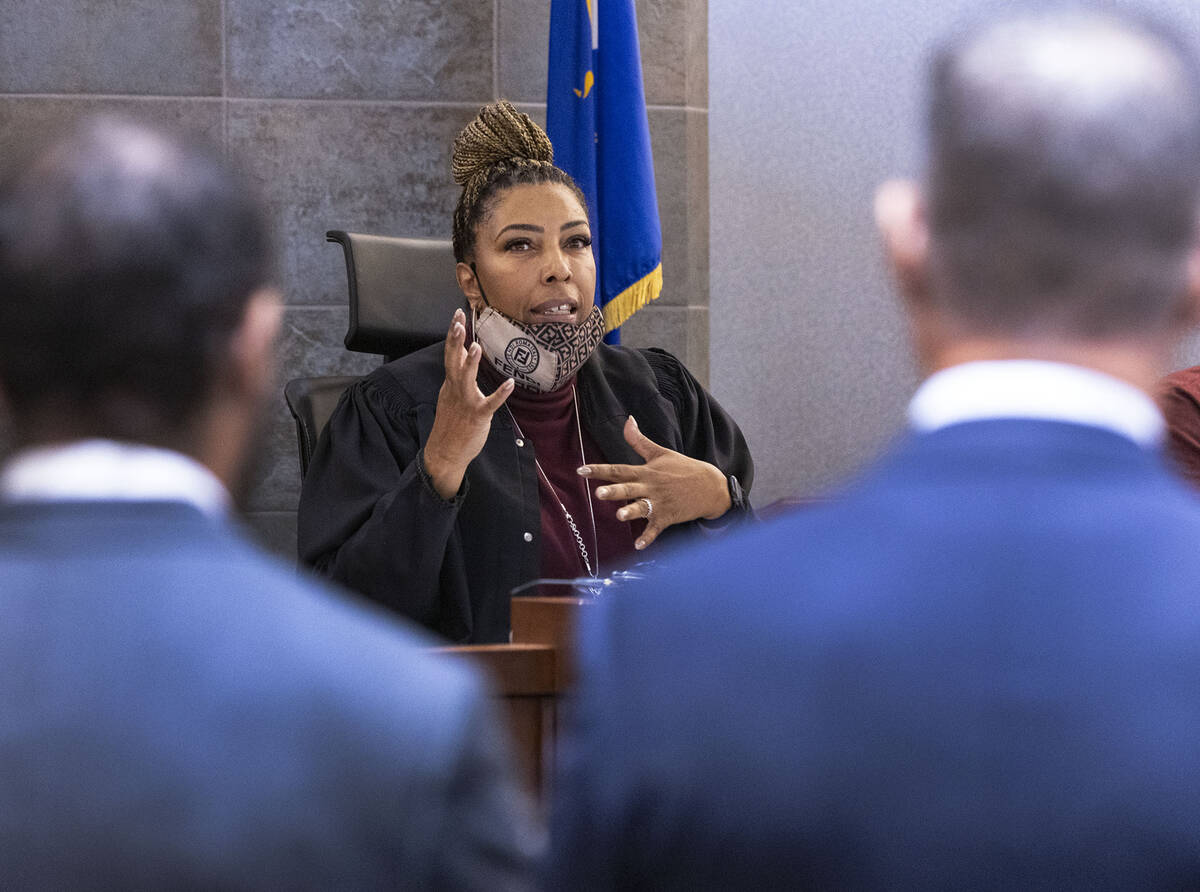 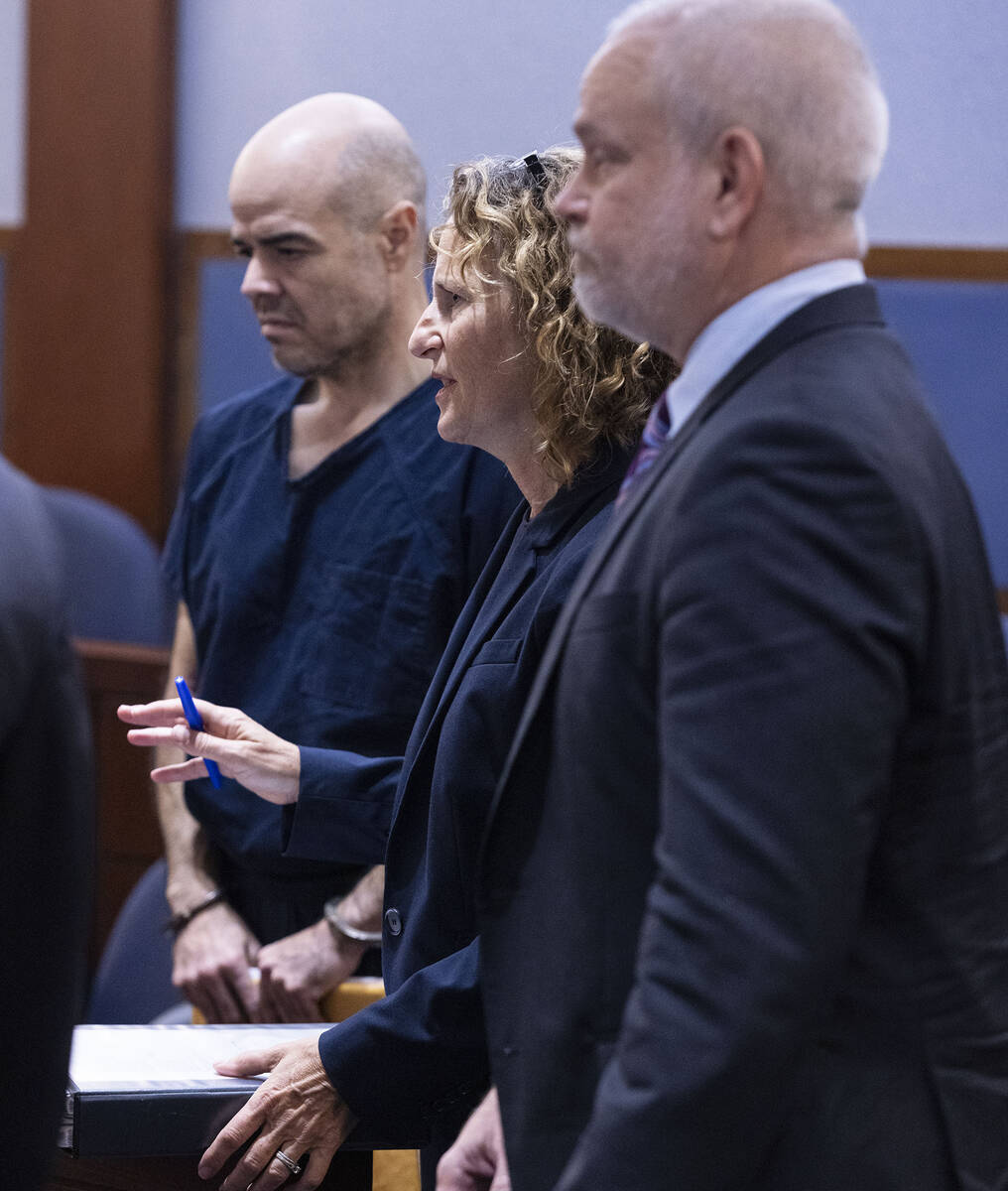 A judge said Wednesday that she did not have jurisdiction to hear arguments in the Las Vegas Review-Journal’s request to prevent authorities from accessing slain investigative reporter Jeff German’s personal devices.

“We’re going to proceed diligently to get this issue in front of the court,” Ashley Kissinger, an attorney representing the Review-Journal, said Wednesday morning, adding that the newspaper intends to file a motion in District Court.

German, 69, was found dead of stab wounds earlier this month outside his Las Vegas home. Telles, Clark County’s public administrator, had been the subject of German’s reporting and is accused of killing the veteran journalist.

Police seized personal electronic devices from German’s home that the news organization believes he used for work, including a cellphone, computers and a hard drive. Prosecutors and the public defender’s office want to search those devices for information that could be related to the criminal case.

During Wednesday’s hearing, Justice of the Peace Karen Bennett-Haron said she agreed with prosecutors’ stance that the justice court does not have jurisdiction to prevent authorities from searching the devices.

“I don’t think this is the appropriate court,” Bennett-Haron said.

Glenn Cook, the Review-Journal’s executive editor, wrote in an affidavit that German’s devices could contain unpublished story drafts, along with emails, text messages and other communications German had with sources that could be considered privileged.

“The most dangerous potential outcome of this case is precedent that murdering a journalist will expose all of that journalist’s work product, source material and confidential contacts to government inspection,” Cook said after Wednesday’s hearing.

Prosecutors said Wednesday that they had proposed a meeting regarding German’s devices in District Court Judge Tierra Jones’ chambers, but Kissinger said the Review-Journal is opposed to any formal meeting that would take place outside of an open courtroom.

The Review-Journal had filed the motion on Monday, following a letter sent to attorneys and law enforcement officials on Friday.

“We filed the motion really in an abundance of caution to preserve our rights and to stop a train that they started,” Kissinger told the judge Wednesday.

Prosecutors have written in court documents that the Las Vegas Justice Court doesn’t have jurisdiction over discovery issues prior to a preliminary hearing. The Metropolitan Police Department has also argued that “a Defendant’s constitutional rights take precedence over any reporter’s rights.”

The Reporters Committee for Freedom of the Press, along with 43 other media organizations, filed court papers on Tuesday requesting to submit a brief in support of the Review-Journal’s motion.

“Denying the Review-Journal’s request for a protective order here would profoundly chill further newsgathering activity and reporter-source communications essential to investigative reporting about possible government and official misconduct — precisely the kind of investigative reporting that allegedly led to the murder of Mr. German,” the Reporters Committee for Freedom of the Press request stated.

Telles, 45, was arrested in connection with German’s death after the suspected killer was captured on video surveillance approaching his house on Sept. 2. Telles’ DNA was consistent with DNA found under German’s fingernails, officials have said.

Earlier this year, German had reported a series of investigative stories about Telles’ workplace conduct and was working on a follow-up story in the weeks before his death.

Kissinger said Wednesday that legal protections for the press are what allow important stories to come to light.

“Every member of the public has an interest in making sure that the press’ privilege that we are asserting here over its confidential sources and other unpublished information is vigorously protected,” she said.