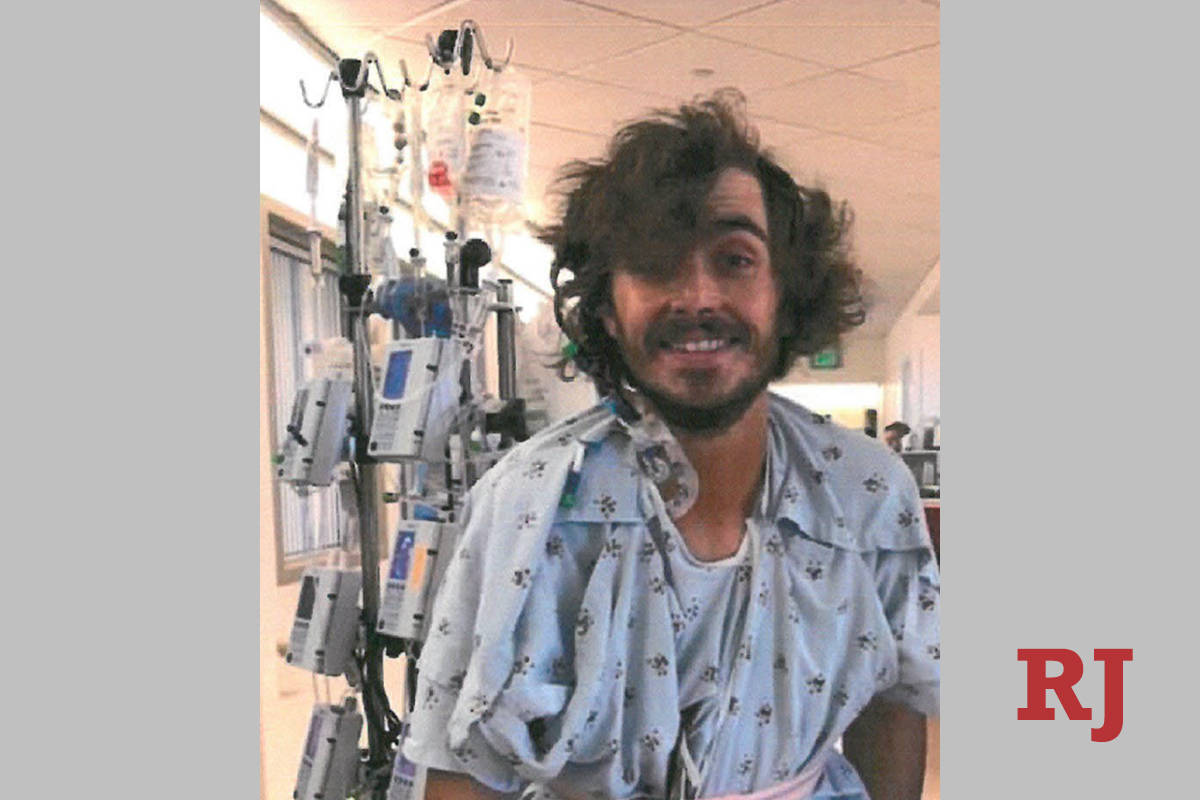 Myles Hunwardsen is shown after his liver transplant on Sept. 23, 2019. (Lori Ogilvie)

Five people who claim they became sick after drinking Real Water, including one man who underwent a liver transplant, filed a joint lawsuit Monday in Las Vegas.

The complaint names Affinity Lifestyles.com Inc., the Las Vegas-based maker of the bottled water, and retailers Whole Foods Market, Costco Wholesale and Terrible Herbst as defendants. It is the third filed in Clark County District Court since last week, when the Food and Drug Administration announced an investigation into liver illnesses linked to the water.

According to the latest lawsuit filed by the Kemp Jones law firm, illnesses linked to what was labeled as “alkalized” water were traced back to November 2018, when Miriam Brody was treated for liver failure at Henderson Hospital.

About 10 months later, the suit states, Myles Hunwardsen also was diagnosed with acute liver failure and was flown to UCLA Ronald Reagan Hospital for a liver transplant.

Three other plaintiffs, Jazmin Schaffer, Tina Hartshorn and Christina Sosa, were treated at various hospitals across the valley, racking up medical bills of at least $300,000.

In response to the FDA investigation, which was accompanied by a warning and survey from the Southern Nevada Health District, Real Water President Brent Jones, a former Nevada legislator, has called for retailers to pull the product from shelves.

“Our goal is to diligently work with the FDA to achieve a swift resolution,” Jones said in a statement provided to The Associated Press. He asked retailers to keep the product “in the back rooms or return it to the distributors,’ adding that “any customer who has purchased Real Water from a retailer is asked to return the product.”

Representatives of the retailers could not be reached for comment late Monday.

The FDA has warned consumers, restaurants and retailers not to drink, cook with, sell or serve the product.

Real Water was marketed as “alkalized water infused with negative ions” and touted on its label as “the healthiest drinking water available.”

“Prior to purchasing the water, Plaintiffs were exposed to, saw, read, and understood Defendants’ respective representations and omissions regarding the safety of the water, as well as their omissions regarding the presence of elevated levels of toxins therein, and relied upon them,” the new complaint states. “Had Plaintiffs known the truth — i.e., that Defendants’ bottled water contained elevated levels of toxins that would cause severe liver damage, rendering them unsafe for consumption — Plaintiffs would not have purchased them.”

The lawsuit alleges that Hunwardsen purchased Real Water from Whole Foods and Terrible Herbst in the months before his hospitalization, while Brody bought the product at Costco before she became ill. Under Nevada law, retailers can be held liable for selling defective products.

On Thursday, Hartshorn told the Las Vegas Review-Journal that she was hospitalized for nine days after having Real Water delivered to her home in the north Las Vegas Valley.

In the first complaint filed against Real Water, Las Vegas parents Emely and Christopher Brian Wren, claim that they and their 2-year-old son, Christopher Noah, suffered health complications after consuming the product. A second suit named another man who suffered acute liver failure and was told he needed a transplant before he recovered.

The FDA originally said that the agency was alerted about five cases of acute non-viral hepatitis, which causes liver failure, in infants and children from November.