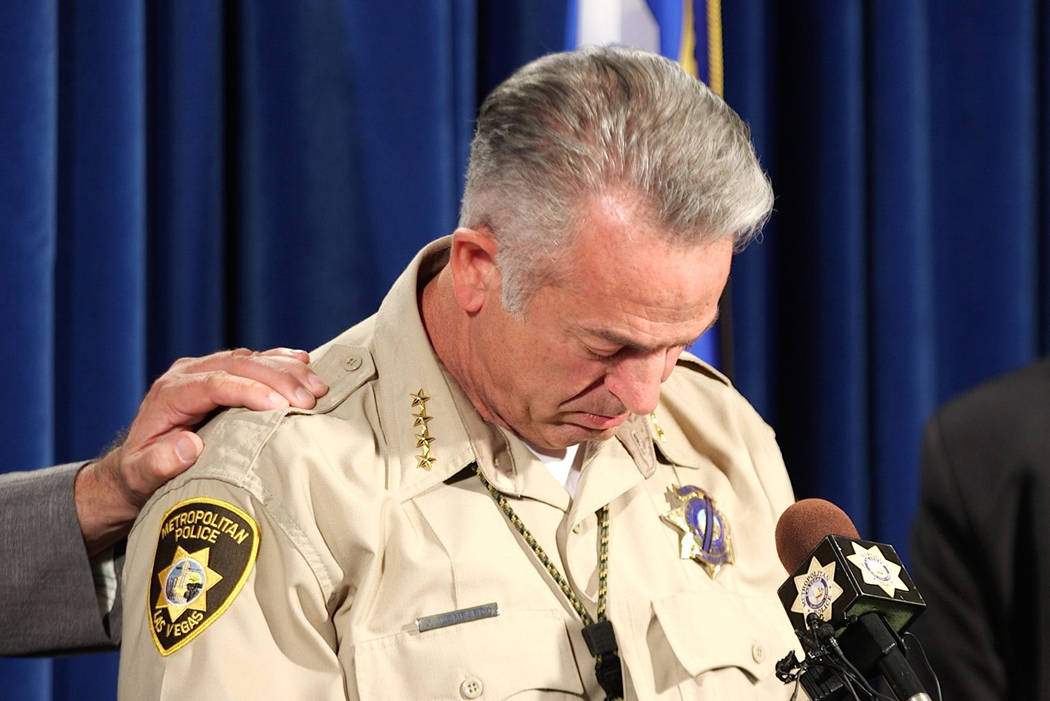 Clark County Sheriff Joe Lombardo gets emotional while he talks about two officers during a news conference at the Metropolitan Police Department in Las Vegas, Friday, Oct. 13, 2017. The officers, Brady Cook and Samuel Wittwer, were injured during the Route 91 Harvest shooting on Oct. 1. (Heidi Fang Las Vegas Review-Journal @HeidiFang) 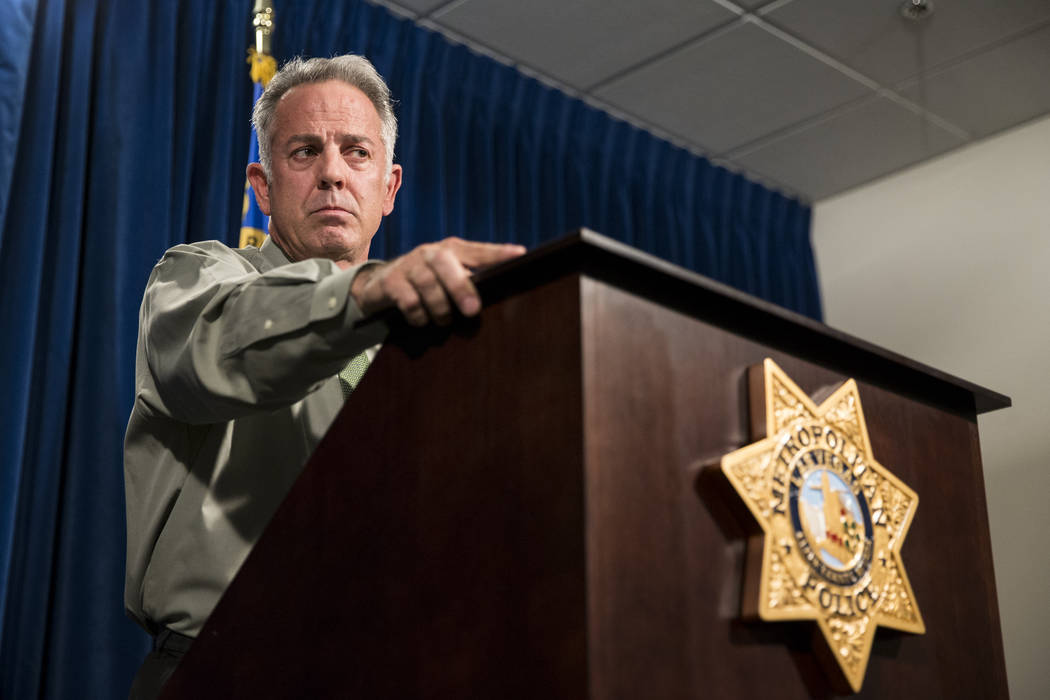 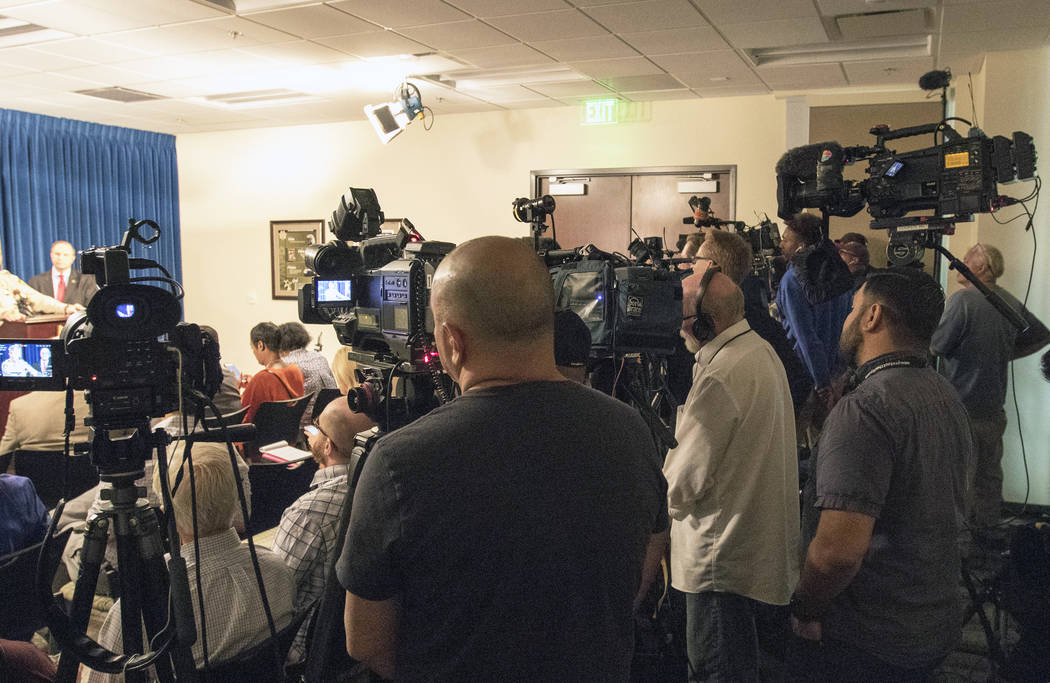 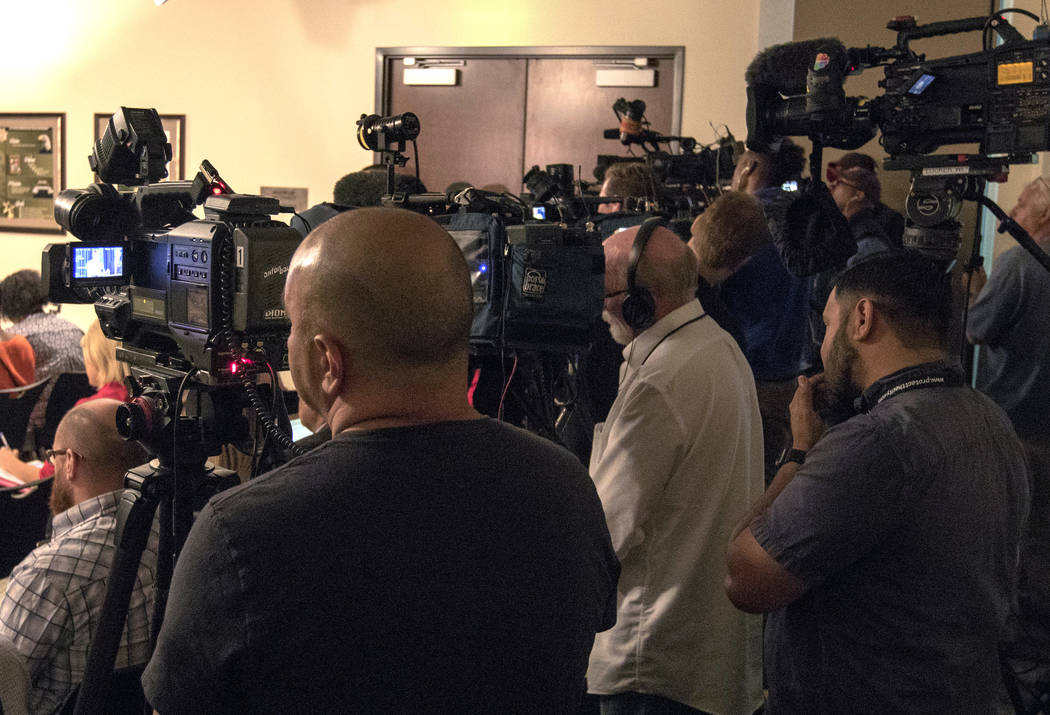 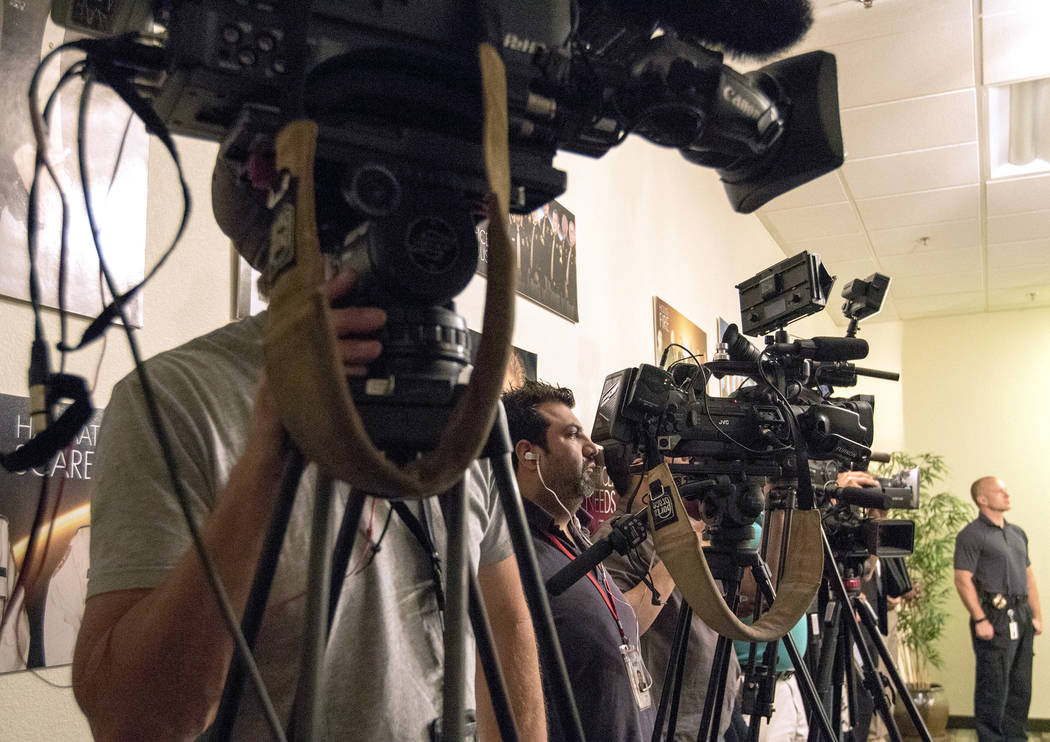 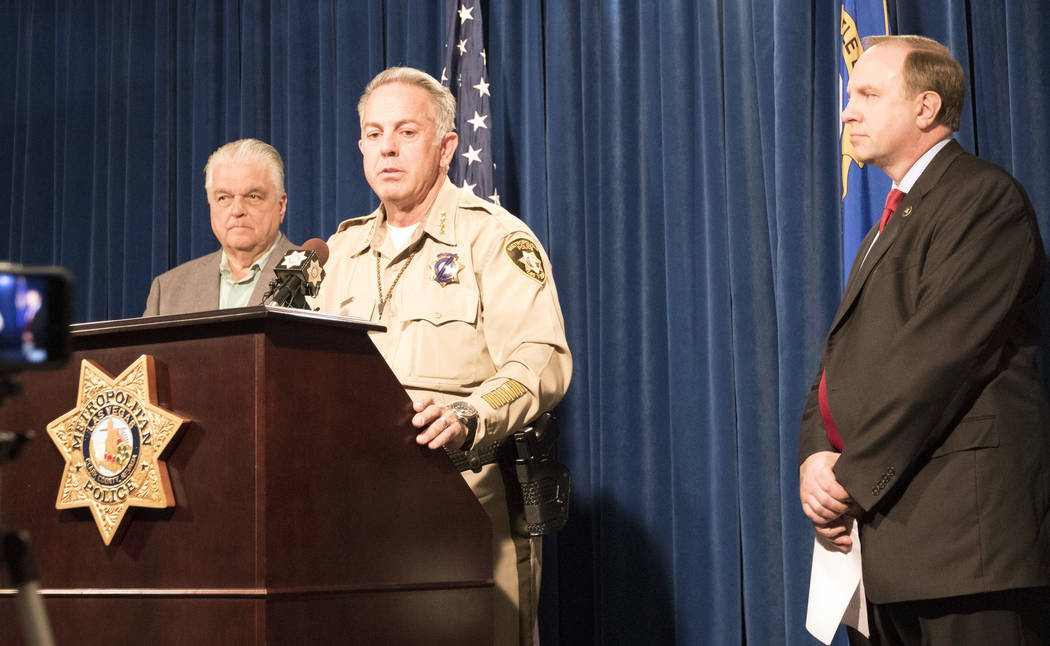 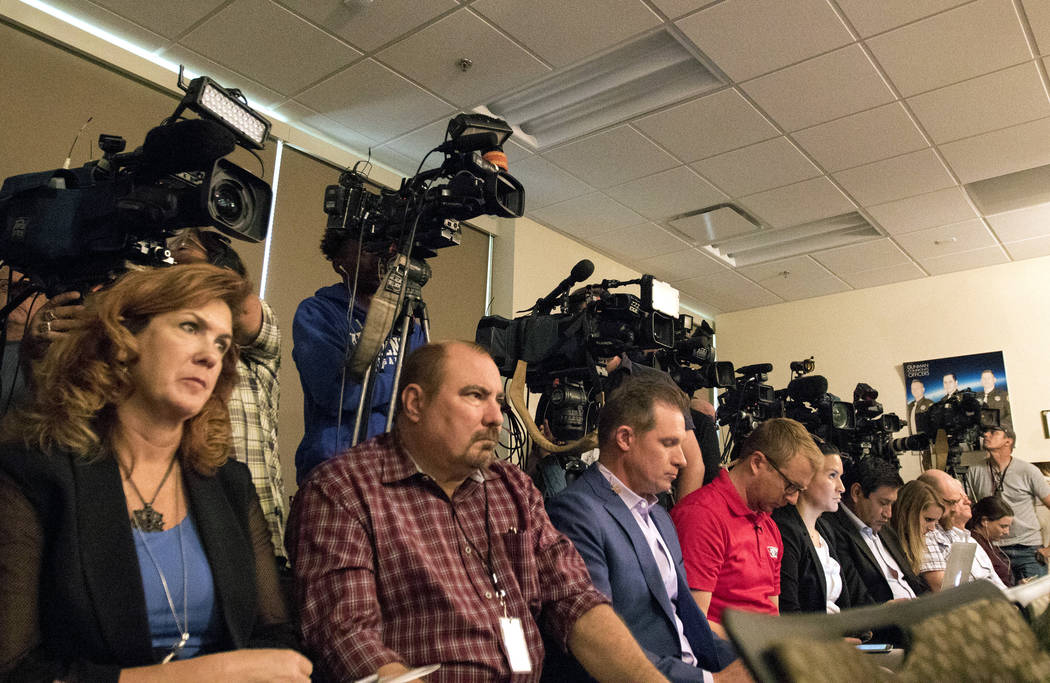 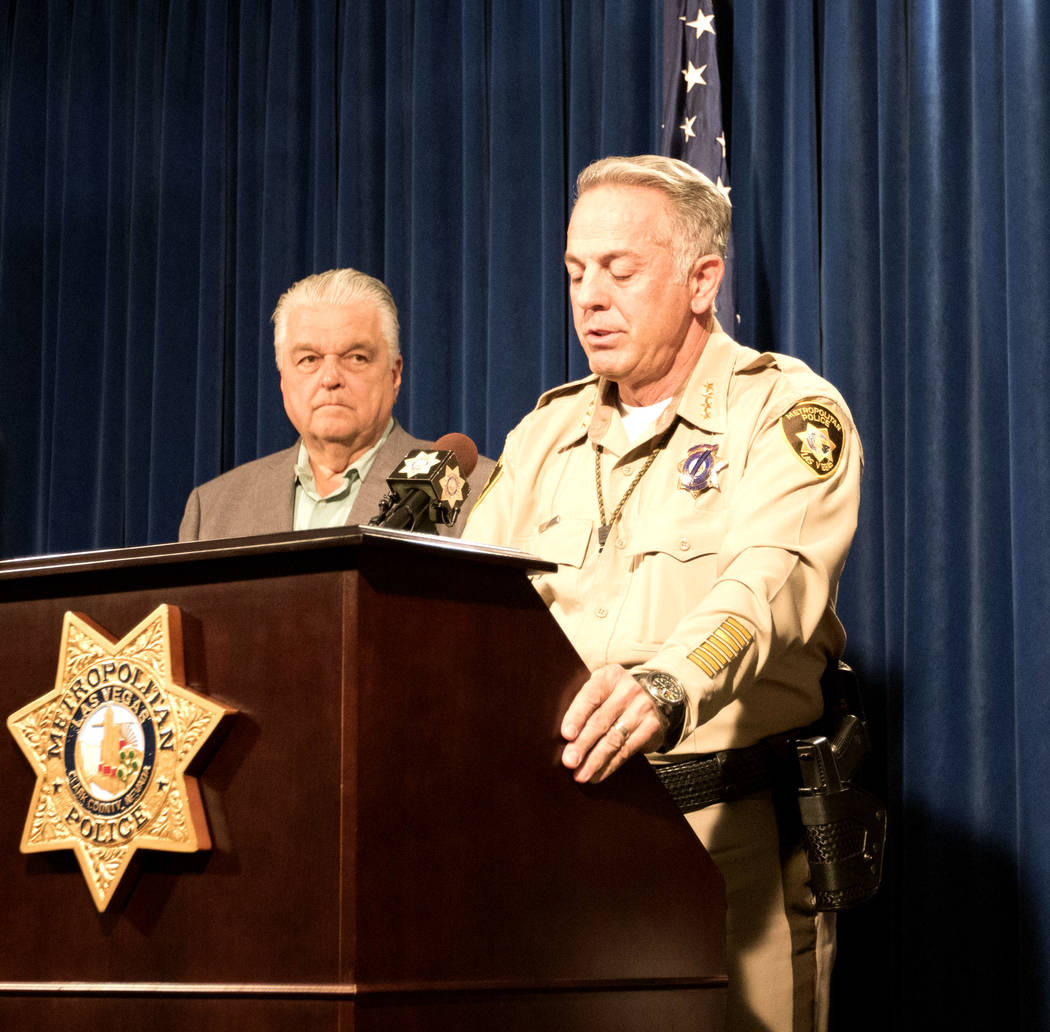 Metro’s newest version reflects the latest information provided by MGM Resorts International, owners of Mandalay Bay, where the gunman was staying and from where he fired his guns.

“I’m not in conflict with their statement,” Lombardo said during a news conference Friday, following a dispute that transpired this week over the timeline of events that occurred the night of the shooting.

The sheriff said Monday that Stephen Paddock shot Mandalay Bay security guard Jesus Campos at 9:59 p.m., about six minutes before the gunman turned his weapons on the Route 91 Harvest festival crowd below his hotel suite. He previously reported Campos was shot after the attack on the concert crowd.

“The 9:59 p.m. PDT time was derived from a Mandalay Bay report manually created after the fact without the benefit of information we now have. We are now confident that the time stated in this report is not accurate. We know that shots were being fired at the festival lot at the same time as, or within 40 seconds after, the time Jesus Campos first reported that shots were fired over the radio.”

At Friday’s briefing Lombardo said he agreed with MGM Resorts’ statement that Campos was hit about the same time shots were fired into the festival crowd. The guard was shot at about 10:05 p.m., he said. The 9:59 p.m. time stamp, Lombardo said, instead referred to the time when Campos encountered a barricaded door.

Lombardo confirmed to the Las Vegas Review-Journal after the news conference that a barricaded door he mentioned during the briefing was one that led from a stairwell to the 32nd floor hallway adjacent to Paddock’s room. He also confirmed that it was the same door that officers used a crowbar to break open when they arrived on the floor at 10:17 p.m.

In the hours following the shooting, preliminary information was released to the public to provide “calmness in the community,” Lombardo said, warning that details from Friday’s media briefing would likely shift as the investigation continues.

The sheriff also had said during the Monday news conference that Paddock checked in to Mandalay Bay in a different room on Sept. 25, three days earlier than previously reported.

Officials still have not said where the gunman’s first room was located in the hotel, but said that it was provided to him free of charge between Sept. 25 and Sept. 28, when he switched to the corner suite and added the name of his girlfriend, Marilou Danley, to the reservation.

Investigators are still looking for any details as to what led the shooter to open fire on the Route 91 Harvest festival crowd, including looking for any potential neurological issues.

An initial autopsy of the shooter’s brain revealed no visual abnormalities, Lombardo said. But police have sent the organ to “an appropriate evaluation facility” to look for microscopic anomalies.

Lombardo also updated the number of injured, which has fluctuated over the past 13 days. Lombardo said they now believe that 546 people were wounded in the shooting, and that 501 of them have been discharged from medical care.

The number of people killed remains unchanged at 58 as of Friday, though Lombardo said some of the 45 wounded who are still hospitalized are in critical condition.

Before refusing to take questions from reporters, the sheriff addressed growing criticism of the Metropolitan Police Department, citing the magnitude of the investigation.

“In the public space, the word ‘incompetence’ has been brought forward,” he said. “And I am absolutely offended with that characterization.”

But toward the end of the news conference, the sheriff’s composure shifted from agitated to emotional as he commended several of his wounded Metro police officers, including officer Brady Cook.

On his second day of field training, Cook suffered four gunshot wounds from one bullet the night of the shooting. Cook and his field training officer, who were among the first to arrive at the scene, joined three other units stationed across the festival grounds. The lights from their patrol cars momentarily pulled the brunt of Paddock’s gunfire off the crowd of more than 22,000 concertgoers.

“So the response of those individuals, I believe, saved lives,” he said. “And the reason I bring this one up, he asked me if he could go back to work today.”

Cook was discharged from the hospital less than a week ago. On Sunday at his mother’s home, he demonstrated to the Review-Journal that he still hadn’t regained full mobility in his right arm where he was shot.

Taking a moment to gather himself, the teary-eyed sheriff ended the news conference with a show of gratitude to the community.

“I want to thank you for letting me be your sheriff,” Lombardo said, fist raised in support. “Vegas Strong.”