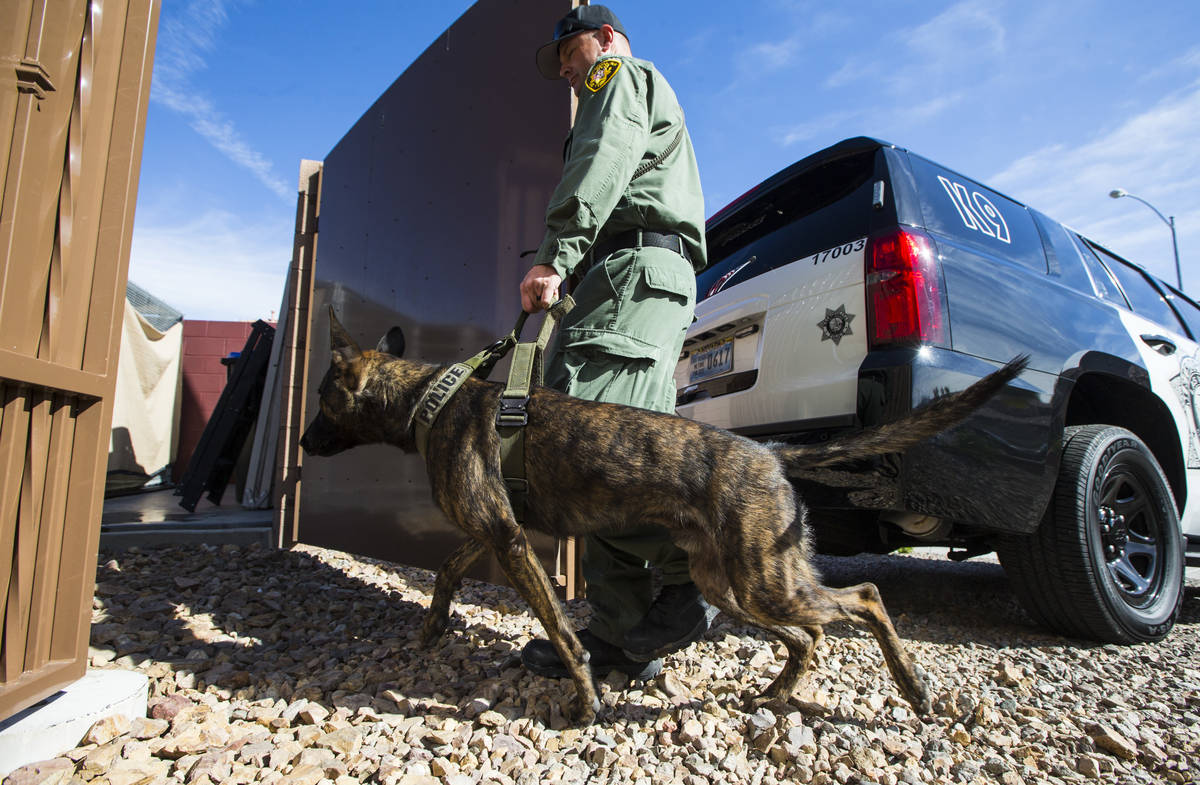 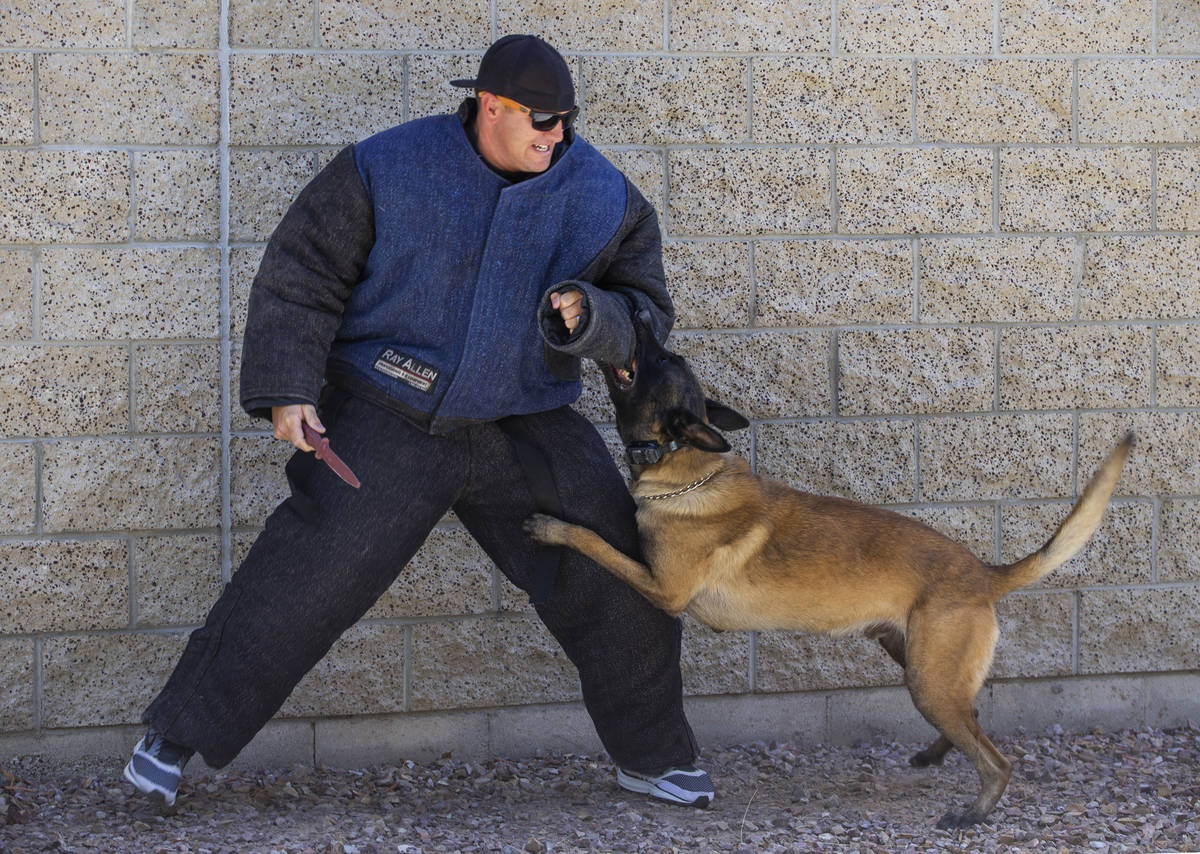 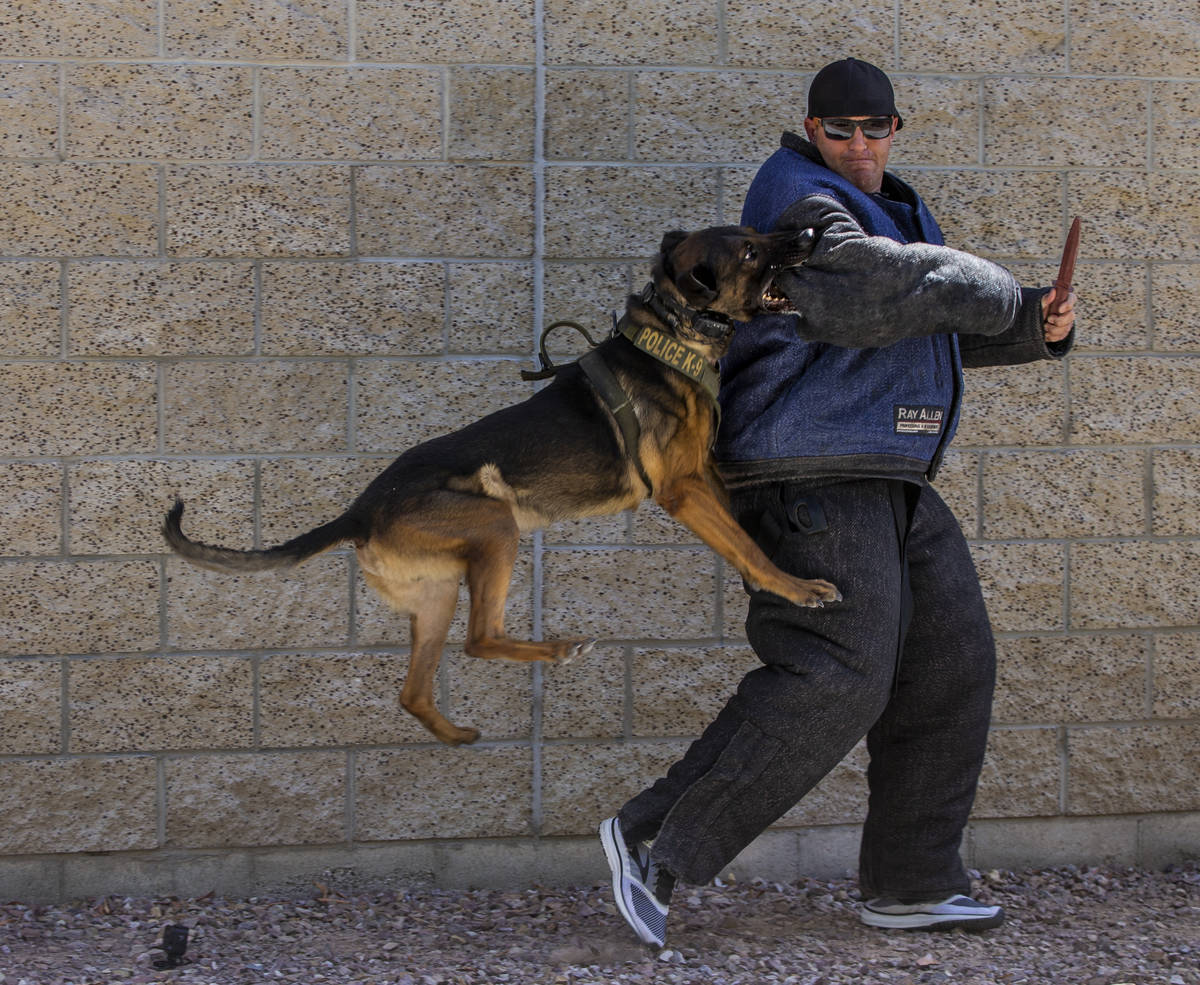 Las Vegas Metropolitan Police officer Shad Rollo as a "bad guy with a knife" is attacked by K9 dog Dasco who leaps into him during a training session on Thursday, Aug. 29, 2019, in Las Vegas. (L.E. Baskow/Las Vegas Review-Journal) @Left_Eye_Images

A spokesman for Metro’s K-9 section attributed the general decline in bites to the police dogs’ presence alone, which can be intimidating enough to lead to an arrest before any use of force is initiated.

The K-9 representative said most of their calls are burglaries and foot pursuits, where the dog’s sense of smell helps police locate a hidden person. About half of the calls are related to armed people who are fighting or attempting to escape while being arrested.

“A dog is a tool we use to make sure we go home at night,” K-9 officer Glenn Obsenares said at a recent public forum discussing the dogs.

Misconduct can be dire

A dog bite from a Metro K-9 is considered an intermediate level of force by the department. The bites are equivalent to kicks, batons or a low-lethal shotgun, according to internal Metro memos.

An online record of misconduct lawsuits maintained by the National Police Funding Database shows only one K-9 lawsuit in the last decade, when a police dog in New Mexico disobeyed commands and latched on to a man during a traffic stop, severing his nipple.

No such misconduct lawsuits have been filed in Nevada since at least 2008, the data shows.

Obsenares said Metro pays between $18,000 and $30,000 for each dog. They go through three months of training, then a one-year trial period in the field where they must respond to a violent call and a search before they can be deployed as official officers.

Metro said the department’s dogs don’t wear protective vests because they lead with their heads, unlike humans whose vital organs are fully displayed. Vests can slow them down, the department said. And in the summer, they can make the heat dangerously unbearable.

In October 2019, K-9 Hunter was rushed into surgery after he was stabbed in the neck 13 times while attempting to resolve a barricade situation. Six months later, K-9 Kimura was stabbed by a “dangerous suspect armed with a knife,” Metro said at the time.

The department confirmed recently that both dogs made a full recovery.

In April 2016, K-9 Nicky was fatally shot by a Metro officer during a running shootout involving four officers and an armed man in northwest Las Vegas. The dog had just returned to active duty following a machete attack that injured his face two months earlier.

“Law enforcement is dangerous work for all involved,” the K-9 spokesperson wrote in a statement. “As much as we love our dogs, (and we do!) we train our dogs and use them to save human lives.”