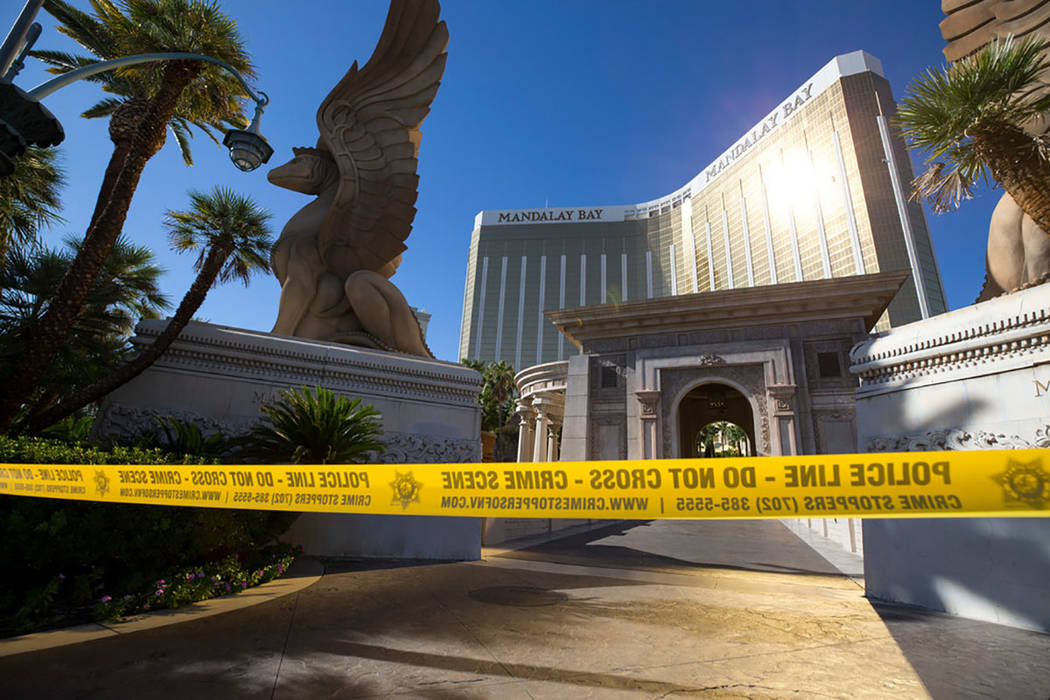 Newly released Oct. 1 body camera footage captured harrowing scenes from deep within the Route 91 Harvest festival grounds, including the moment a handful of officers realized a mass shooting was unfolding.

The eight videos released Wednesday marked the 12th court-ordered release since early May of Metropolitan Police Department audio, video and documents from the massacre, which left 58 concertgoers dead and hundreds more injured.

The clip in question begins in the festival’s medical tent, where at least three officers are finishing up a medical call. The sound of continuous popping can soon be heard in the background.

At first, no one reacts. But a few seconds later, a suddenly bewildered-looking officer starts moving his radio closer to his ear — the first sign that something isn’t right.

Without an answer, the group jerks toward the exit, jogging into a clearly confused crowd.

The next several minutes are a blur of screams, long bouts of booming gunfire and the bright lights of the Strip that sometimes shake into view. The officer with the camera orders people to keep moving, helping as many as she can along the way.

“Let’s get them out,” she instructs other officers after realizing the shots were coming from Mandalay Bay. “Let’s just work on getting people out. We’re not going to be able to get this guy.”

The videos released Wednesday amounted to nearly eight hours of footage. Most were recorded from inside Mandalay Bay or throughout the festival grounds.

One clip captured footage from a nearby flood tunnel, where officers worked to evacuate several people staying there.

“Let’s go, pep in that step,” an officer shouts to those in the wash as they collect their belongings. “People are dying.”

Two other videos show officers working to evacuate the festival grounds sometime after the gunfire ended.

In one, they order a man walking into the venue to turn around and exit. He explains that he is looking for someone.

“I understand,” the officer says. “They’re not in here.”

“Yes,” the officer replies. “And if they are here, you do not want to see them. I guarantee that. Come on.”

Behind the stage, groups of officers worked to evacuate people taking shelter in trailers and tour buses, including a group of 18 people and an infant.

In what appears to be a catering tent nearby they found one man hiding alone.

“I just did an active shooter class — literally — online,” the man says, speaking to the shock of it all.

The officers ask the man if he saw how the shooting started.

He cried as he tried to keep talking.

The woman to the left of him had been hit. He grabbed his wife and child and tried to hide. They got separated, but were OK. He had been there hiding ever since.

The officers briefly comforted him, then escorted him toward an exit.

Police previously released more than 3,000 pages of witness statements and officer reports, as well as 911 calls and additional body camera footage. A Review-Journal examination of those records found that many officers experienced communication problems during the mass shooting response.

Clark County Sheriff Joe Lombardo has said a final report on the massacre will be released by the end of the month.