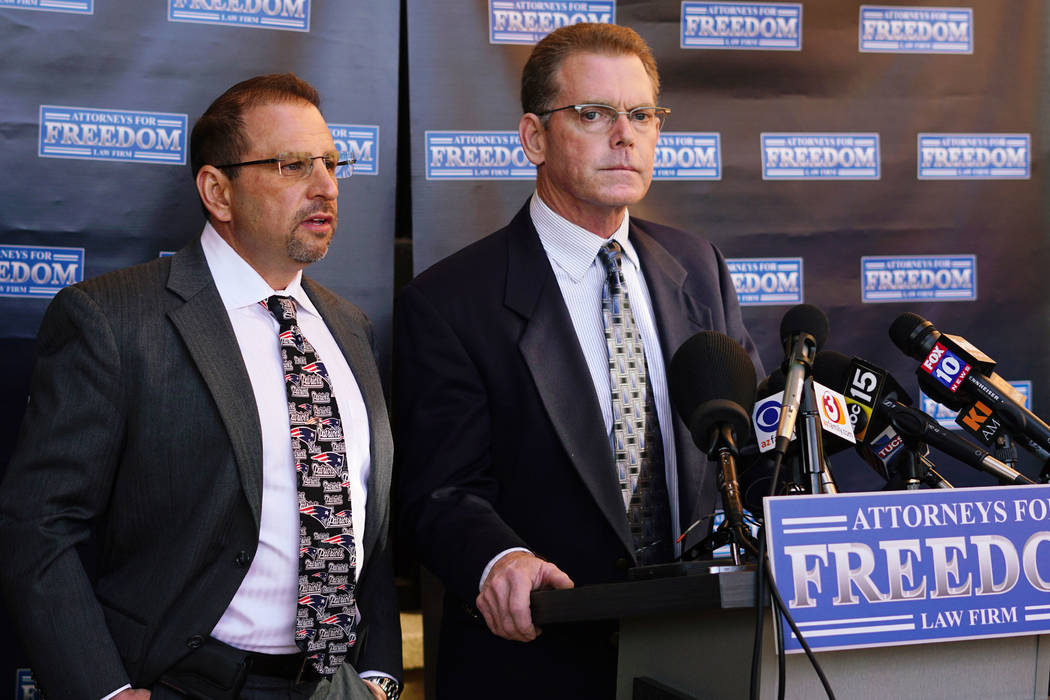 Douglas Haig, right, the man who was identified this week as a "person of interest" in the Las Vegas shooting investigation, speaks at a news conference with his attorney, Marc J. Victor, center, on Friday, Feb. 2, 2018, in Chandler, Arizona. (Ross Leviton/Las Vegas Review-Journal) 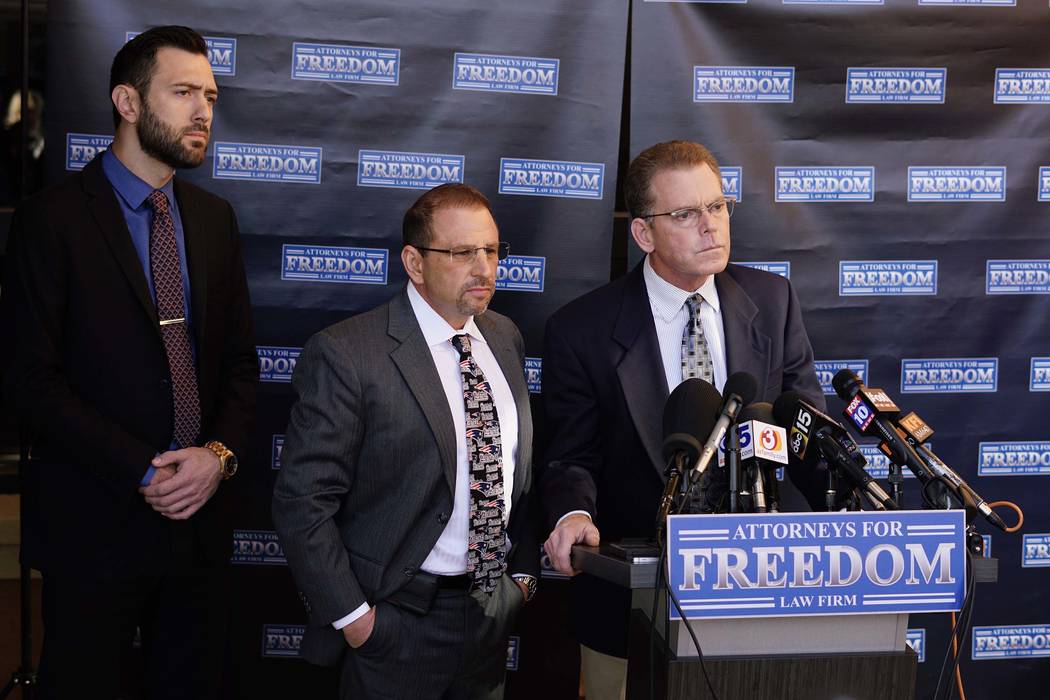 Douglas Haig, right, the man who was identified this week as a “person of interest” in the Las Vegas shooting investigation, speaks at a news conference with his attorney, Marc J. Victor, center, on Friday, Feb. 2, 2018, in Chandler, Arizona. (Ross Leviton/Las Vegas Review-Journal) 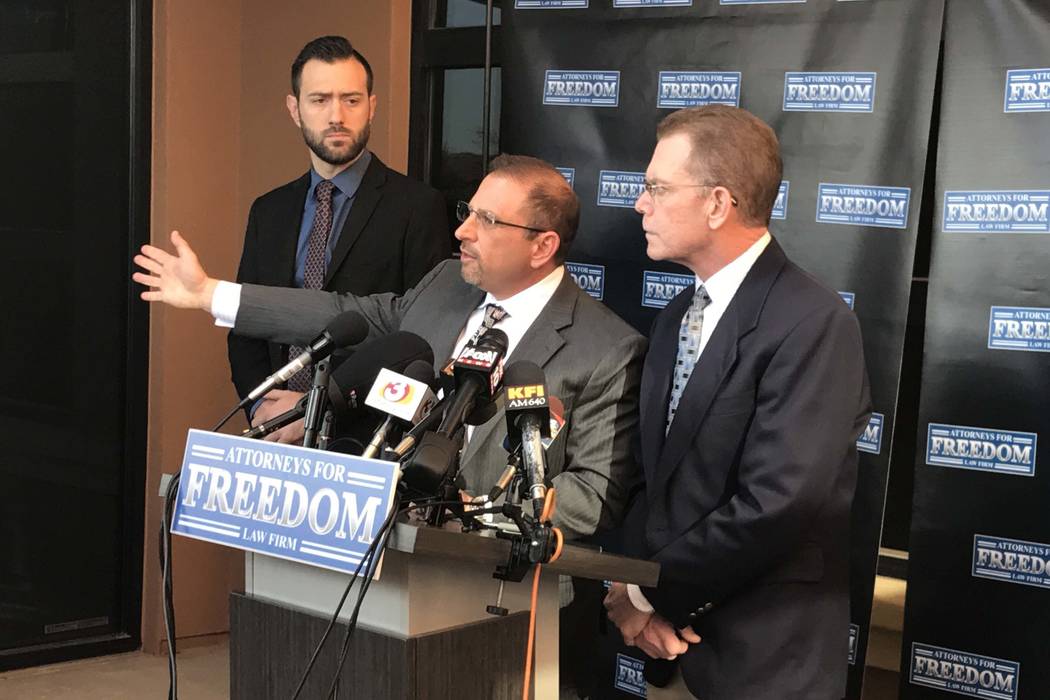 CHANDLER, Ariz. — The Arizona man who sold bullets to gunman Stephen Paddock was charged Friday with conspiracy to manufacture and sell armor-piercing ammunition without a license.

Douglas Haig, 55, is the first person to be charged in connection with the Las Vegas shooting investigation. Paddock, 64, killed himself on Oct. 1 after fatally shooting 58 people and wounding hundreds more. Authorities have described him as the lone shooter.

According to a criminal complaint, the FBI determined that “two unfired cartridges bearing Haig’s fingerprints” were found in Paddock’s suite at Mandalay Bay, and the cartridges are classified as armor-piercing ammunition.

Court records show that a warrant for Haig’s arrest was issued Friday morning by a U.S. magistrate judge in Las Vegas.

Haig appeared in a Phoenix courtroom Friday afternoon, hours after holding a news conference with his lawyer, who told reporters he did not expect his client to face charges.

U.S. Magistrate Judge Michelle Burns released Haig on his own recognizance. He must remove all weapons, ammunition and related equipment from his home by 5 p.m. Wednesday.

If convicted, Haig could face up to five years in prison, according to the U.S. attorney’s office in Las Vegas.

Neither Haig nor his lawyer, Marc J. Victor, could be reached for comment after news of the criminal case broke.

During the news conference at his law offices in Chandler, Victor said his client sold ammunition to Paddock legally. He described Haig as a “law-abiding citizen” and a “proud American” who is “not a political activist of any kind.”

“This was a routine transaction to purchase a routine type of ammunition that is available in many different retail outlets throughout the state of Arizona,” the attorney said. “After that transaction, Doug had absolutely no further contact with Mr. Paddock.”

Haig was identified this week as a “person of interest” in the shooting investigation. At the Friday morning news conference, he said he did not believe the tracer ammunition he sold to Paddock was used in the massacre.

“You would have seen red streaks coming from the window,” Haig said.

Paddock fired into the Route 91 Harvest festival crowd from his 32nd-floor suite.

Haig also said Paddock demonstrated no unusual behavior when he came to Haig’s home in Mesa to purchase the tracer ammunition.

“He pulled up, very well-dressed, very well-groomed, very polite, very respectful, told me what he wanted,” Haig said. “I gathered it up, put it in a box, told him what he owed me. He paid me, put it in his car and drove away. At no time did I see anything suspicious or odd or any kind of tell, anything that would set off an alarm.”

Haig’s name surfaced Tuesday in one of about 300 pages of police search warrant records released by Clark County District Judge Elissa Cadish in connection with the mass shooting. The judge later said her staff should have redacted the name.

According to the Metropolitan Police Department document, prepared in October, “Until the investigation can rule otherwise, Marilou Danley and Douglas Haig have become persons of interest who may have conspired with Stephen Paddock to commit Murder with a Deadly Weapon.”

Danley was Paddock’s girlfriend and initially was named as a person of interest in the investigation. On Jan. 19, Clark County Sheriff Joe Lombardo said he did not expect her to face charges.

The release of Haig’s name prompted a gaggle of reporters to swarm his home late Tuesday. Outside his home, Haig confirmed he had been contacted by investigators.

According to the criminal complaint, the search of Paddock’s hotel suite turned up an Amazon.com box that had a shipping label marked with Haig’s name and address. On Oct. 2, federal agents arranged to interview Haig and his business partner, who is not identified in the document.

After reviewing their records, Haig and the associate said they had their first interaction with Paddock around Aug. 27 at a gun show in Las Vegas, where he purchased some ammunition from the pair. They also interacted with him at a Phoenix gun show in early September, when they made arrangements for a future deal.

Haig told agents he spoke to Paddock on Sept. 19 and gave him directions to Haig’s home. At the home, Paddock paid cash for 720 rounds of tracer ammunition, which Haig placed in an Amazon.com shipping box.

“Haig noted that Paddock took the time to go back to his car to get gloves, which he put on prior to taking the box from Haig,” the complaint states. “Paddock then loaded the box into the trunk of a dark gray vehicle.”

Haig told agents he reloads ammunition but does not offer reloaded cartridges for sale to his customers. He also said none of the ammunition recovered at Las Vegas crime scenes would have tool marks on them consistent with his reloading equipment.

“Reloaded ammunition refers to ammunition that is manufactured from component parts, including previously fired cartridge cases,” according to the complaint.

The FBI executed a search warrant at Haig’s home on Oct. 19 and seized over 100 items, according to the complaint.

“Laboratory analysis confirmed that some of the ammunition recovered during the search at Haig’s residence was in fact reloaded armor-piercing ammunition,” according to the document, which also alleges that the two .308-caliber cartridges found in Paddock’s suite with Haig’s fingerprints “had toolmarks consistent with the reloading equipment recovered in Haig’s backyard workshop.”

At Friday’s news conference, Haig said he had been selling military surplus ammunition part time as a “hobby.”

When Paddock purchased the tracer bullets at his home, Haig said, Paddock told him “he was going to go out to the desert and put on a light show either with or for his friends.”

Haig added that he typically sold ammunition to customers at gun shows or shipped out the product. Every two to three months, though, he would allow customers to come to his home for purchases.

“I have to trust them,” Haig said of those customers.

According to a statement from the U.S. attorney’s office in Las Vegas, “Business records reveal that Haig sold armor piercing ammunition throughout the U.S., including Nevada, Texas, Virginia, Wyoming, and South Carolina.”

Haig said the release of his name this week has changed his life “quite a bit.”

“I’ve had people pounding on my door, death threats, one woman screaming through my door that I should be killed and I should die,” he said. “It’s been not a lot of fun, quite frankly.”

Haig works for Honeywell Aerospace, an aircraft engines and avionics manufacturer in Phoenix, a company spokesman confirmed Tuesday. He sold ammunition through a company called Specialized Military Ammunition, which has since been shuttered.

Haig said Friday that he is no longer selling ammunition and is not sure he ever will again.

“I had no contribution to what Paddock did,” Haig said. “I had no way to see into his mind. The product that I sold him had absolutely nothing to do with what he did. I’m a vendor-merchant whose name was released.”