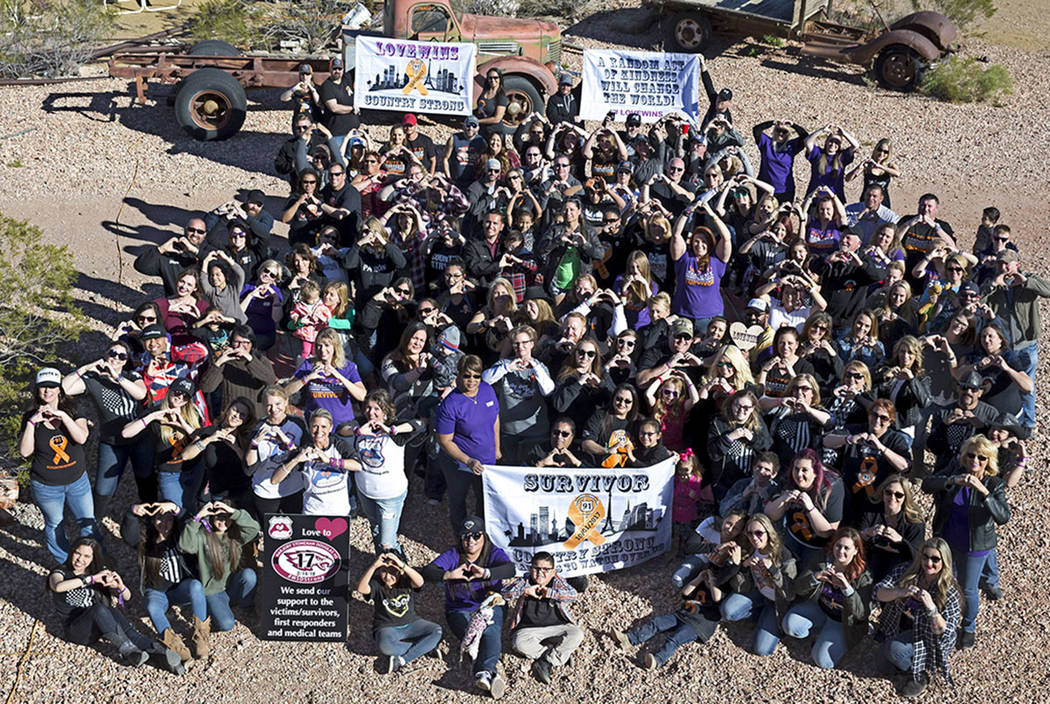 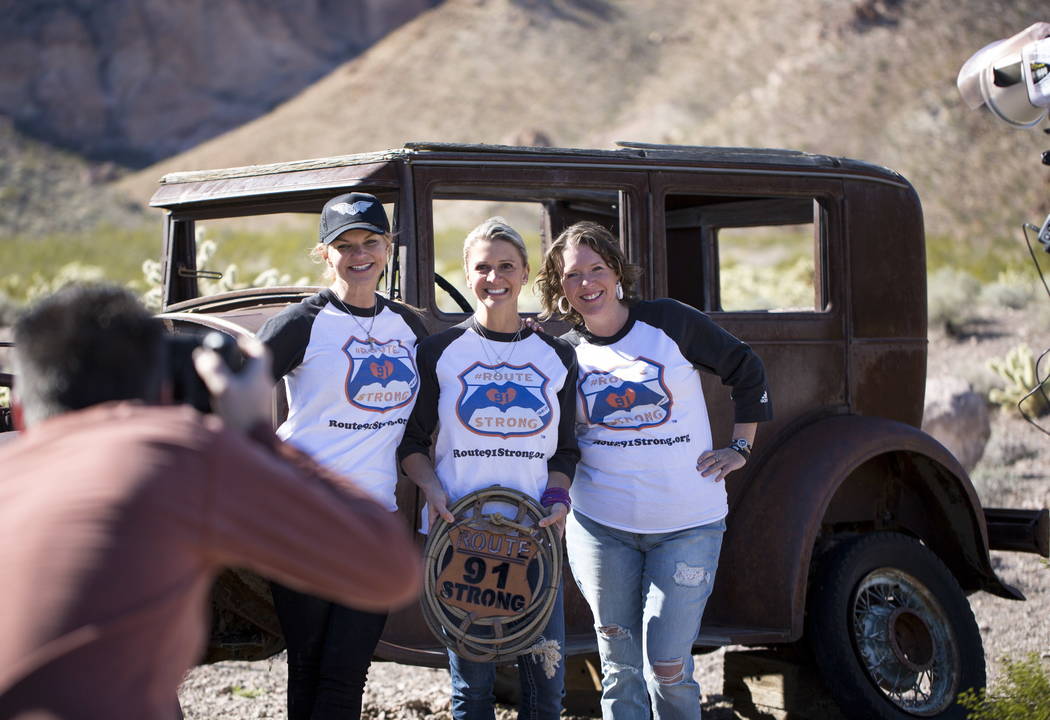 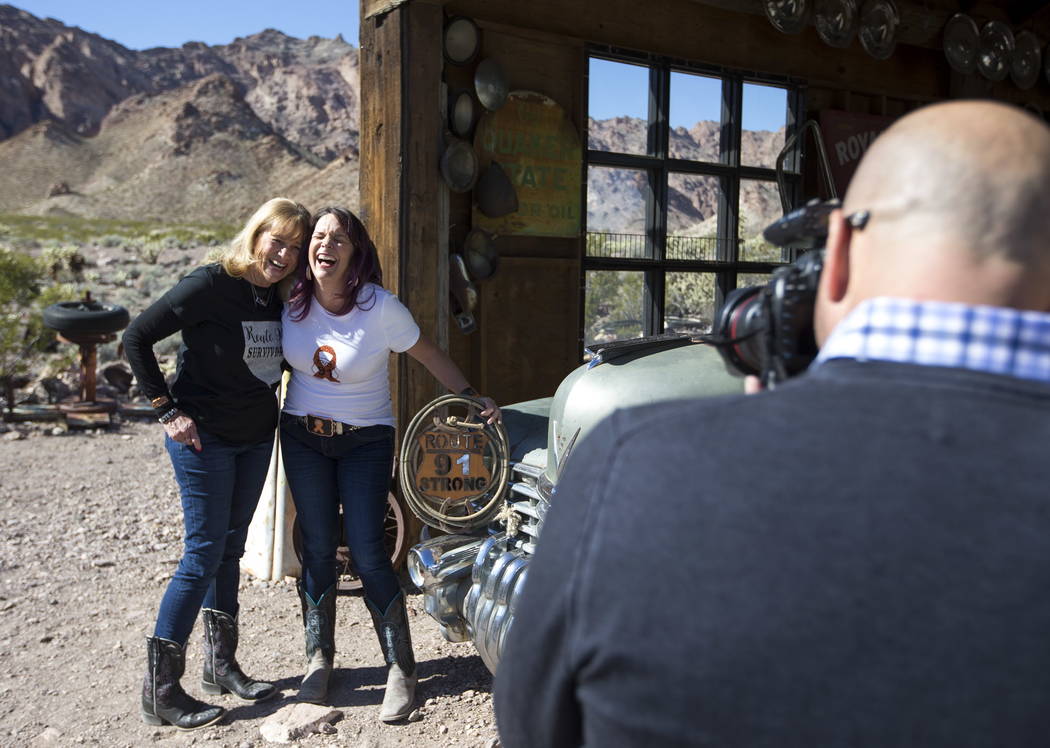 Route 91 Harvest survivors Tracy Pirtle, left, and her daughter, Kacey Martino, of Logandale, Nev., share a laugh as they pose during a photoshoot for Route 91 survivors at the Eldorado Canyon Mine in Nelson, Nevada on Sunday, Feb. 25, 2018. Richard Brian Las Vegas Review-Journal @vegasphotograph

Hundreds of Oct. 1 shooting survivors, their family members and friends flooded the ghost town of Nelson on Sunday.

They posed for photos, talked with one another and hugged near Eldorado Canyon Mine. Some even shared a laugh.

Several wore T-shirts with orange ribbons on them. The image, often inscribed with the Oct. 1, 2017, date, has come to symbolize pain and loss, as well as hope and recovery.

Thousands of people who were at the Route 91 Harvest festival since have reunited at concerts, barbecues and brunches.

Sunday was different. They were there to get their picture taken.

LoveWins, a group of survivors who volunteer to host benefit events for those affected by the Oct. 1 shooting, coordinated the event.

The seed for the group was planted when survivor Dennis Guerrero II, a Los Angeles photographer, told another survivor about an idea for a toy and supplies drive for the families of the 58 people who were slain.

He posted the idea on Facebook, where it went viral. He collected more than $20,000 in toys, gift cards and cash donations that were distributed to the families.

Now, nearly five months later, LoveWins has a board of directors consisting of Route 91 survivors. Guerrero is filing for nonprofit status for the group.

Guerrero has has held several other portrait sessions in Southern California, and he traveled to Seattle last month to photograph survivors there, too.

Guerrero was inspired by the realization that while he has likely more than 2 million images on backup drives, “I’m lucky if maybe 100 of them have me in them.”

He realized that his family hadn’t taken a photo together in more than a decade.

“The whole point is for people to get together and … have pictures of their loved ones,” Guerrero said. “So they can have a good memory that’s come out of Route 91 and let evil know it’s not going to win.”

Each person photographed will receive a link to an electronic drive with their photos, Guerrero said. Since he started the project, his images have been printed and framed, made into jewelry and even tattooed.

Shawna Bartlett, a survivor and secretary for LoveWins, served as lead organizer for Sunday’s event. An event planner, Bartlett was working as a promoter for the Route 91 festival Oct. 1 and was “right in front of the stage that night.”

She since has arranged reunions for survivors at Stoney’s Rockin’ Country, planned meetings at the Healing Garden and organized outings to hockey games. Sunday’s photo shoot took her three months to plan, she said, including finding the venue and a live band and reaching out to survivors.

“To be honest, I didn’t know if I would ever be able to find my smile again,” Bartlett said. “Being with (other survivors) and doing all these events, I’ve been able to smile.”

She said she has made countless friends since becoming a part of the survivor community, and her “Facebook friend list has tripled” in the past several months.

“We don’t want to be around anybody else but each other,” Bartlett said. “Nobody else gets it.”

Bartlett said she doesn’t need an explanation if another survivor is crying, quiet or even angry.