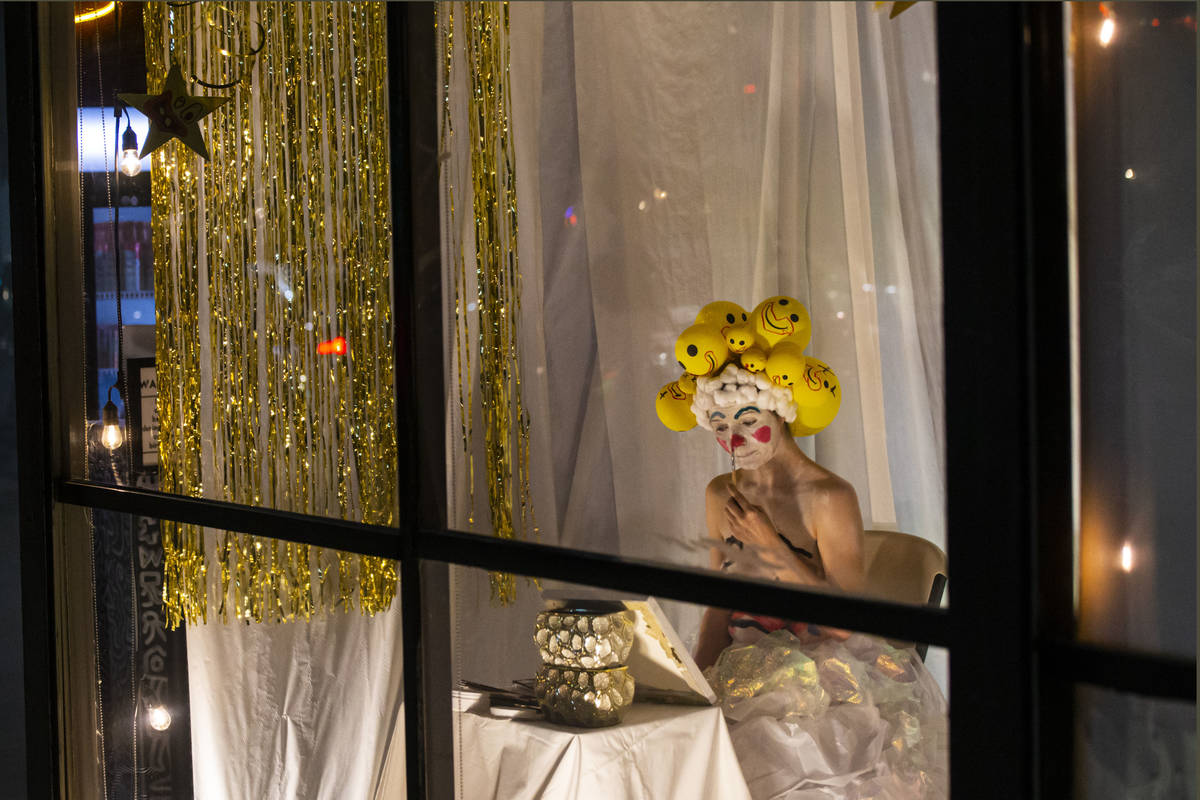 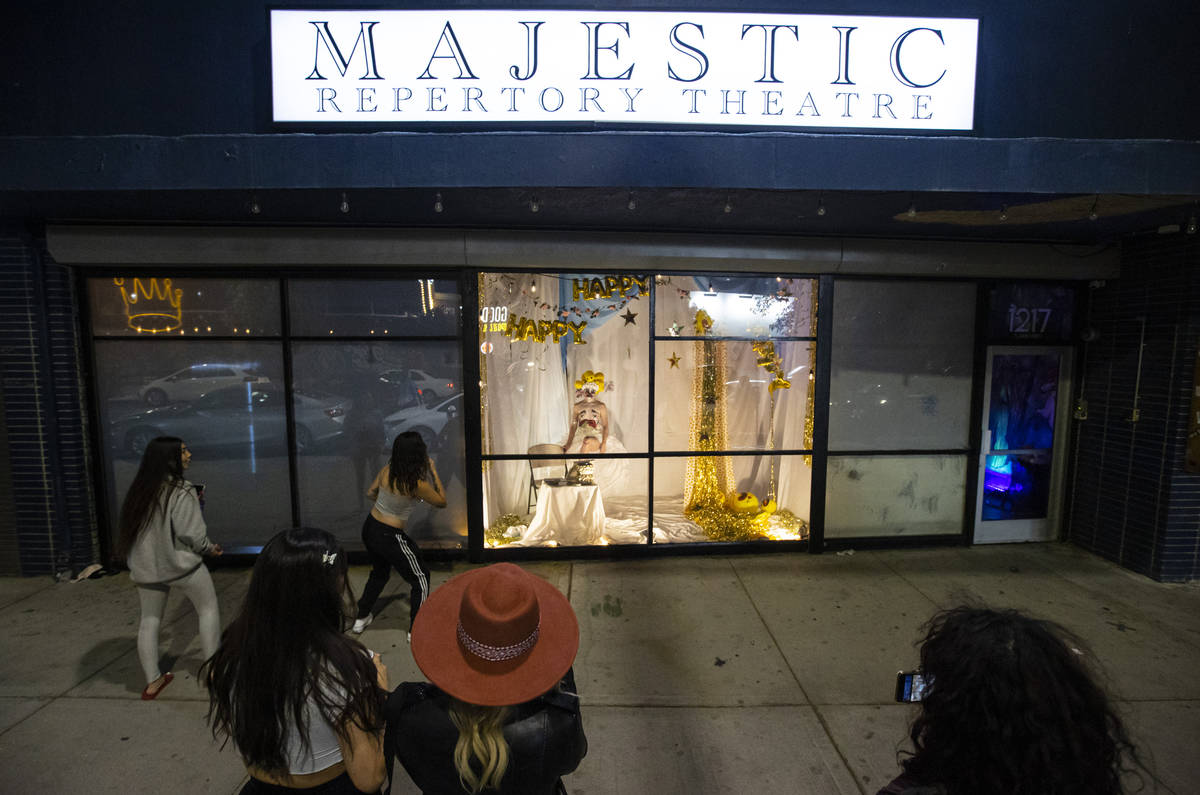 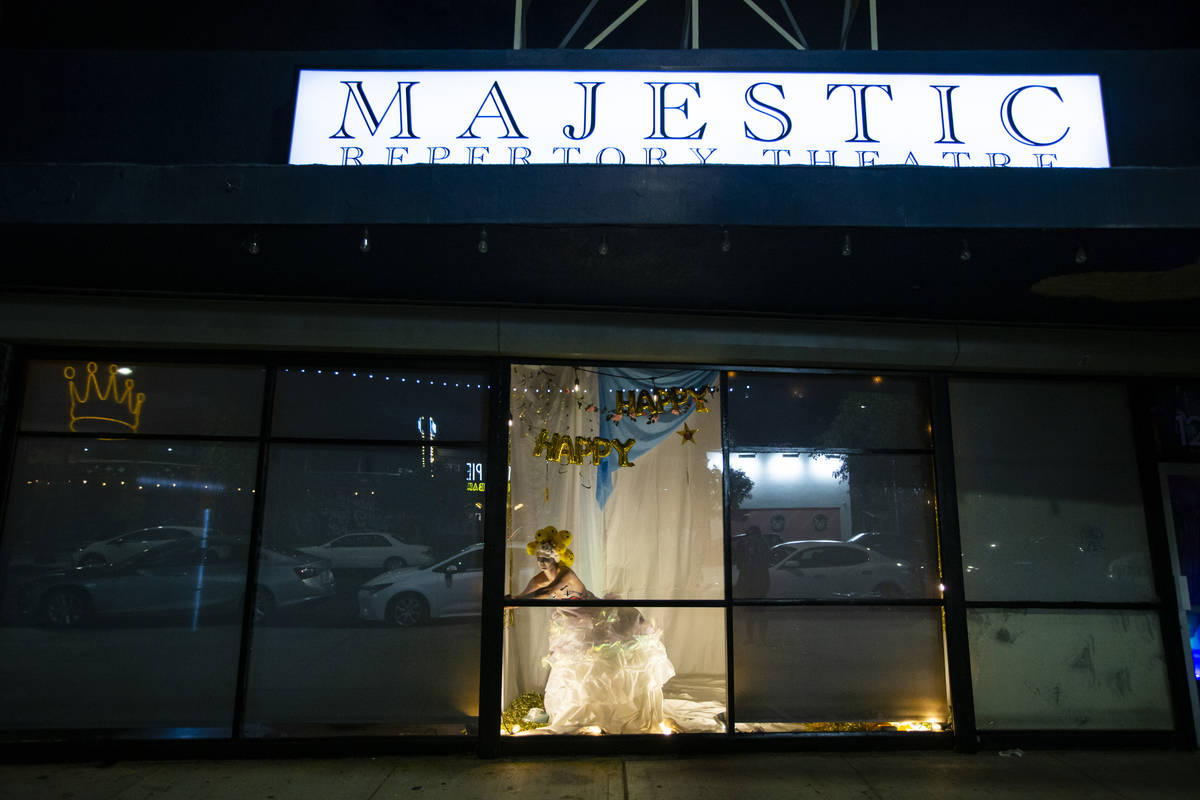 Heidi Rider raises the curtains at the start of her performance from the windows of the Majestic Repertory Theatre in the Arts District of downtown Las Vegas on Monday, April 26, 2021. (Chase Stevens/Las Vegas Review-Journal) @csstevensphoto 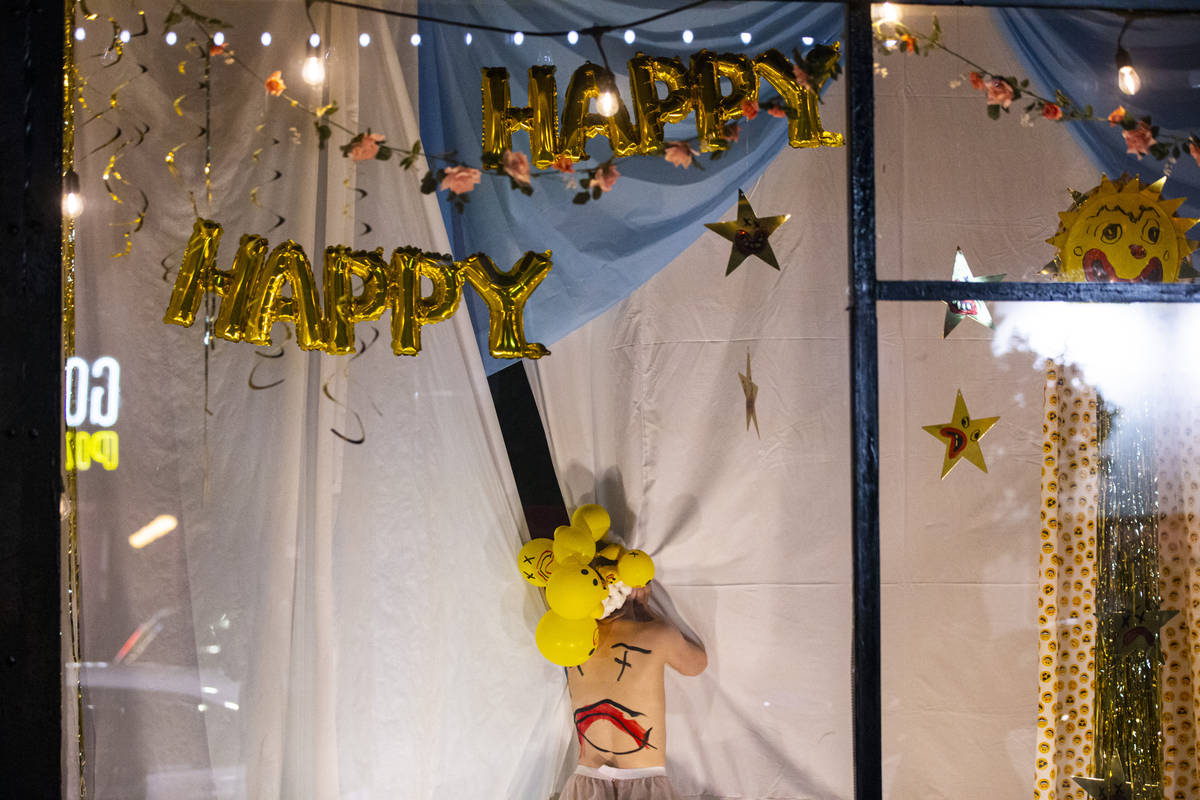 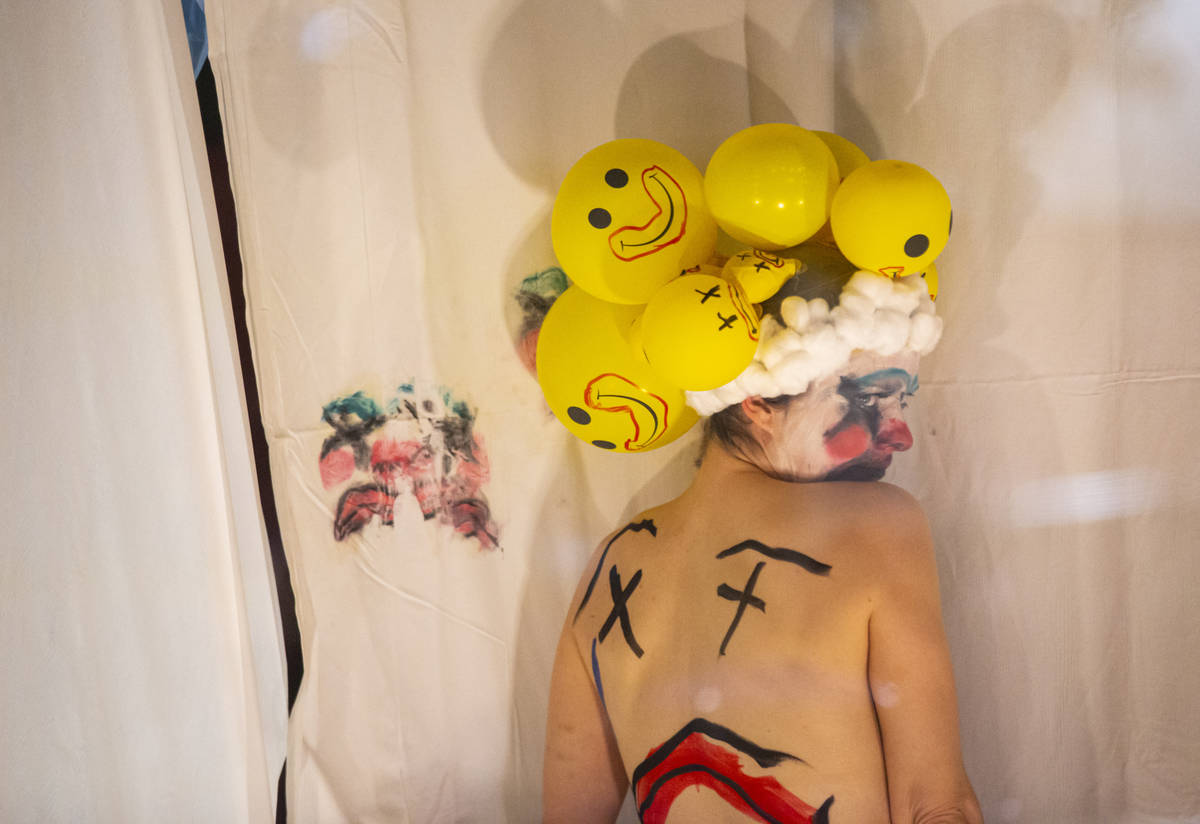 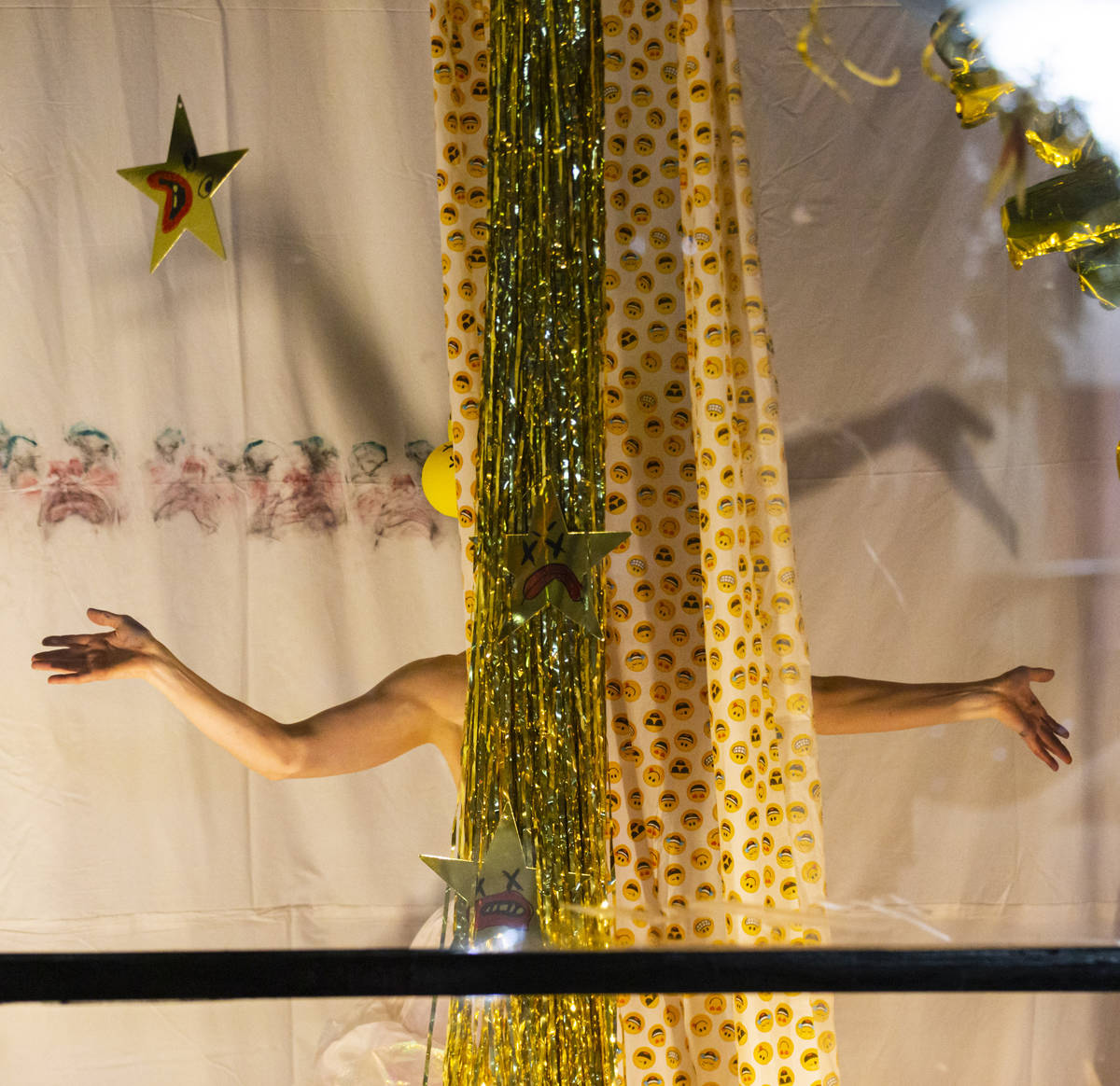 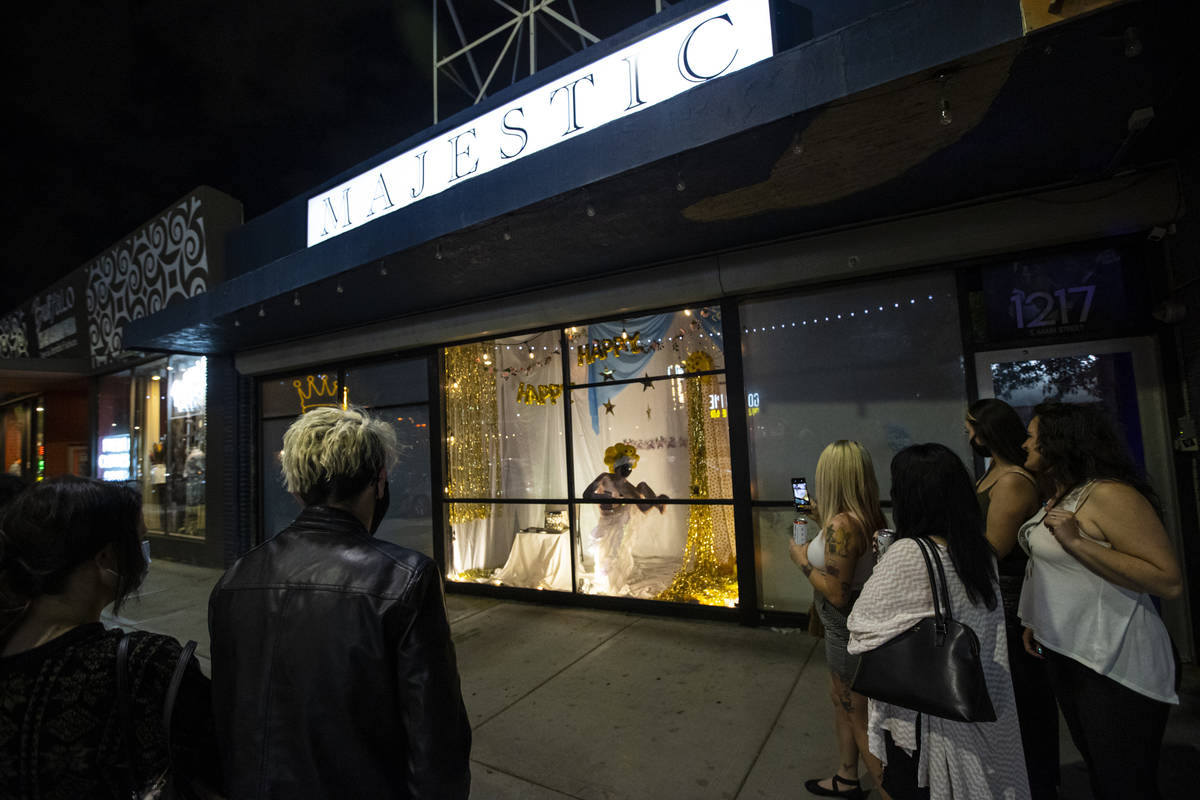 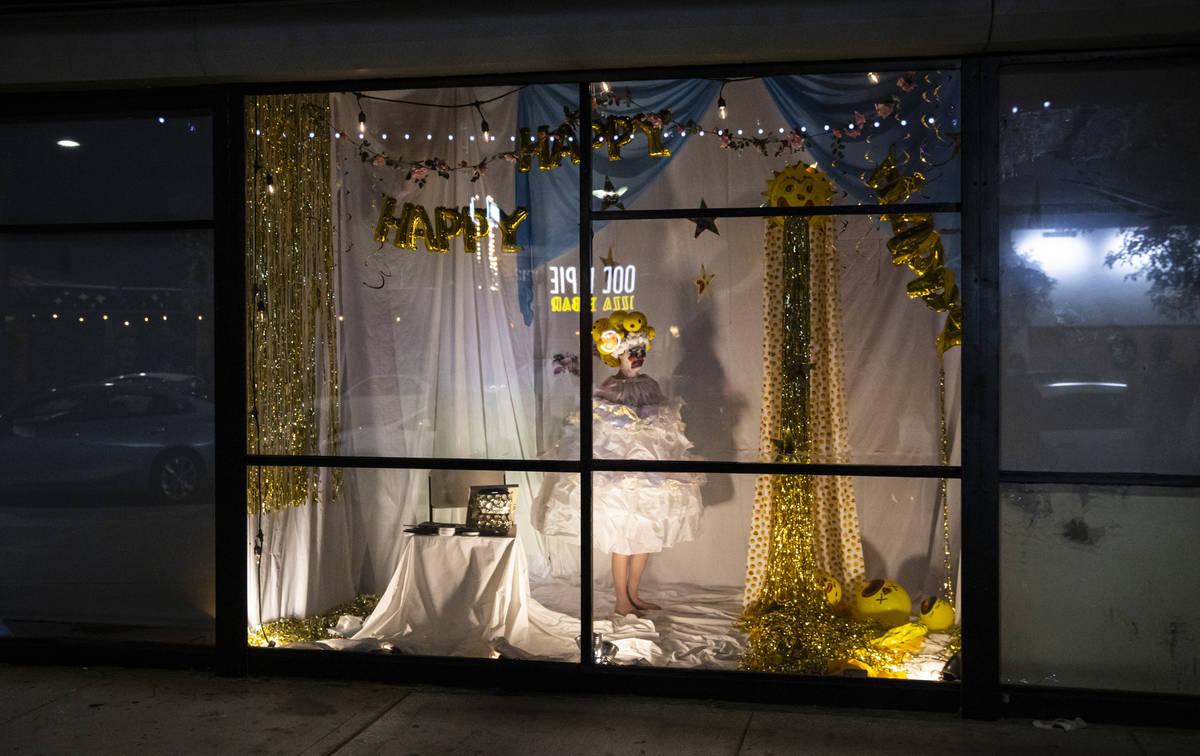 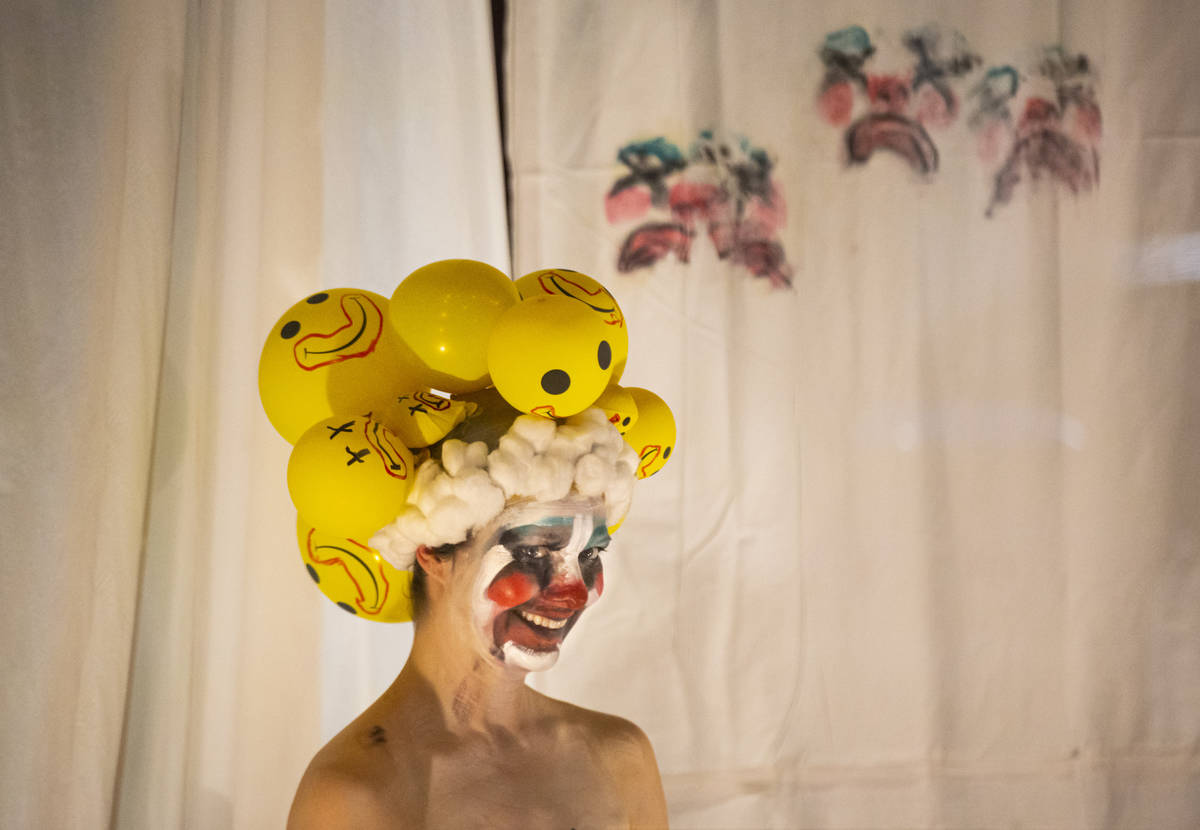 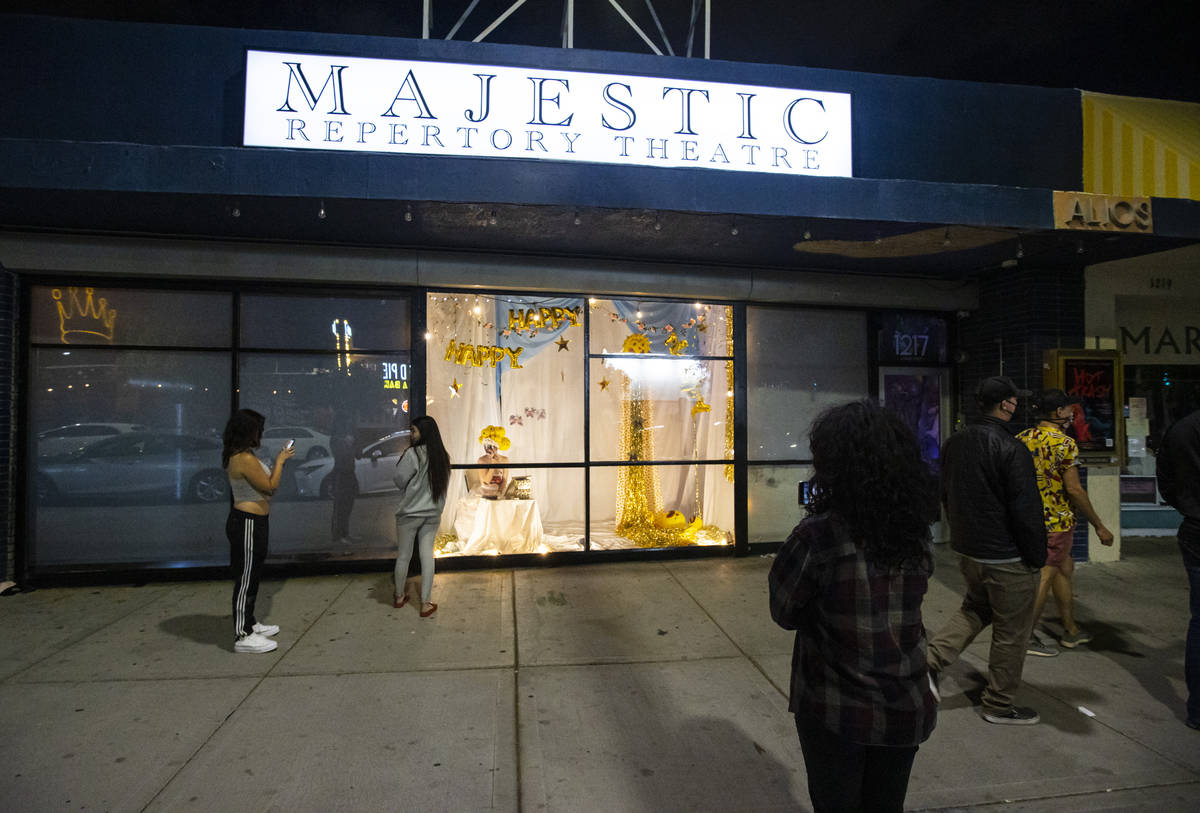 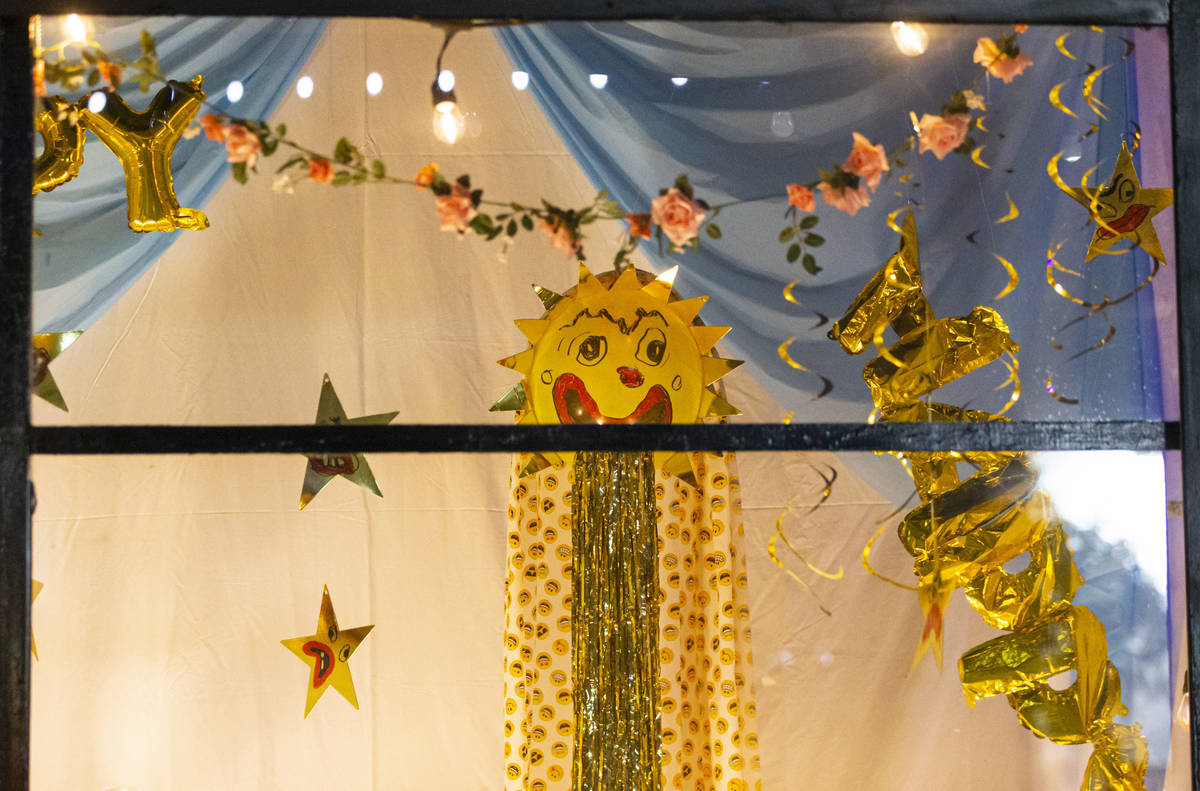 Decorations in the windows of the Majestic Repertory Theatre as Heidi Rider, not pictured, performs in the Arts District of downtown Las Vegas on Monday, April 26, 2021. (Chase Stevens/Las Vegas Review-Journal) @csstevensphoto 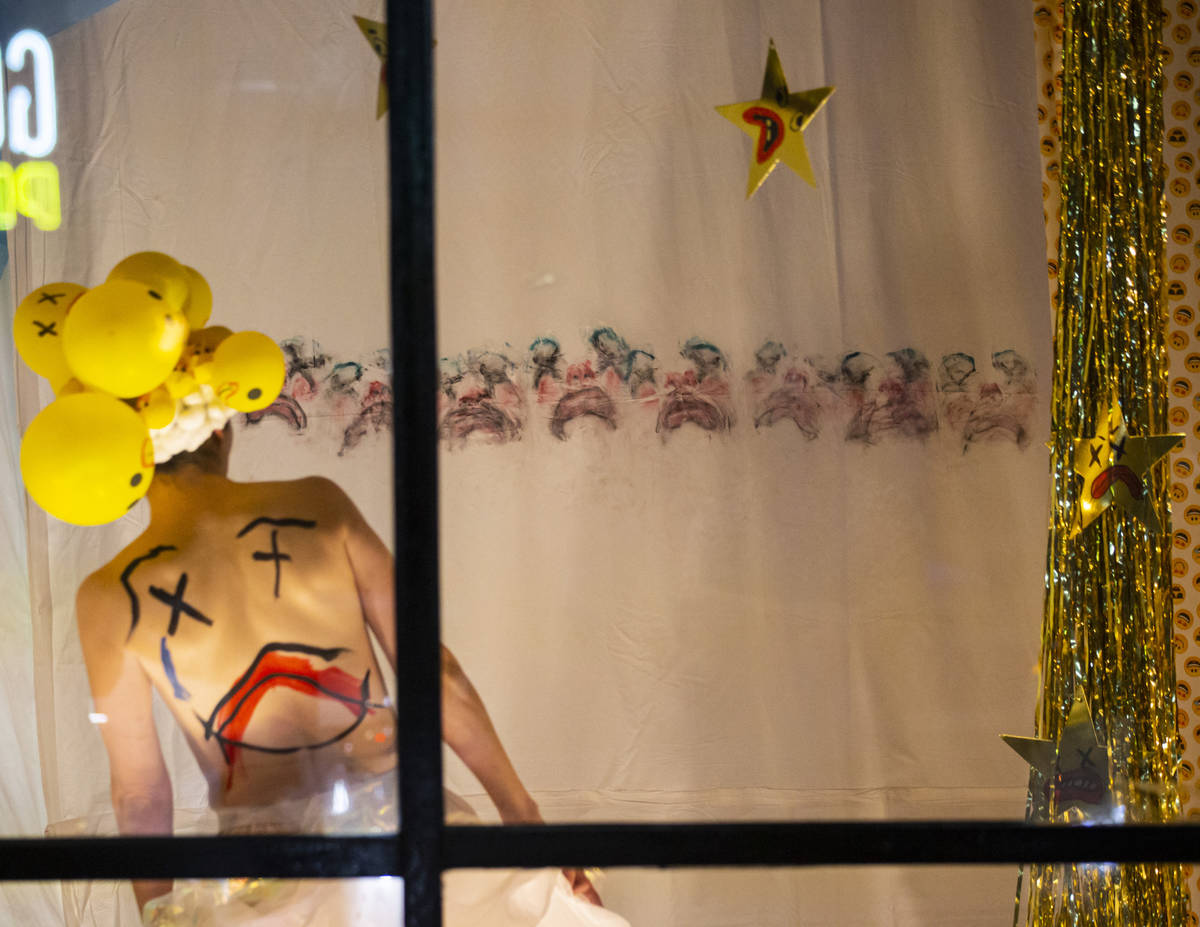 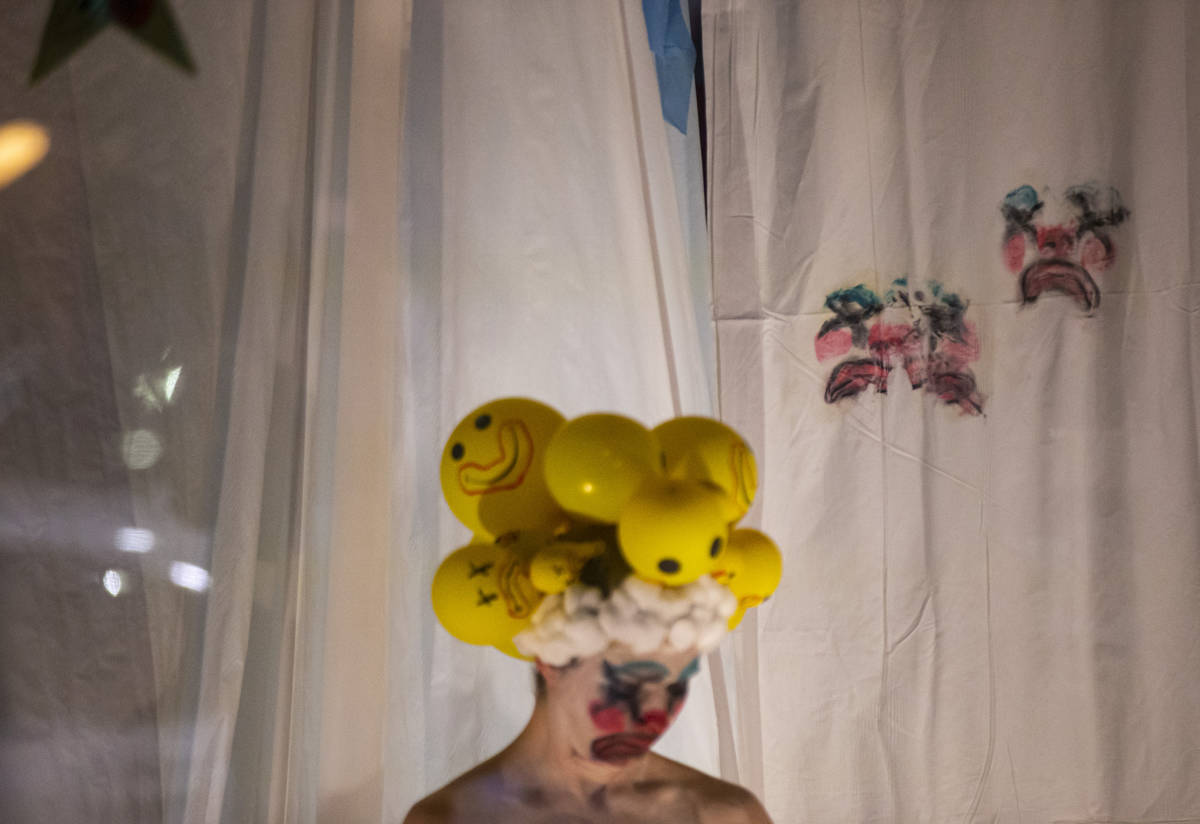 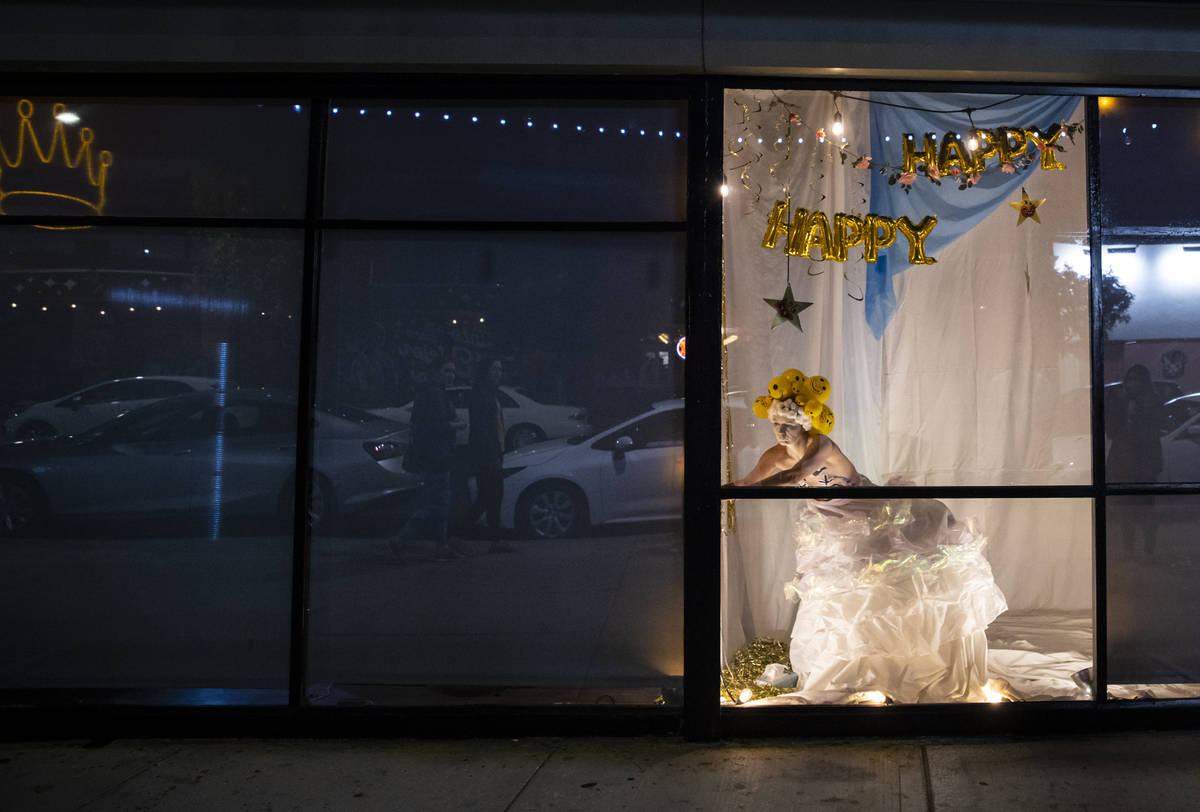 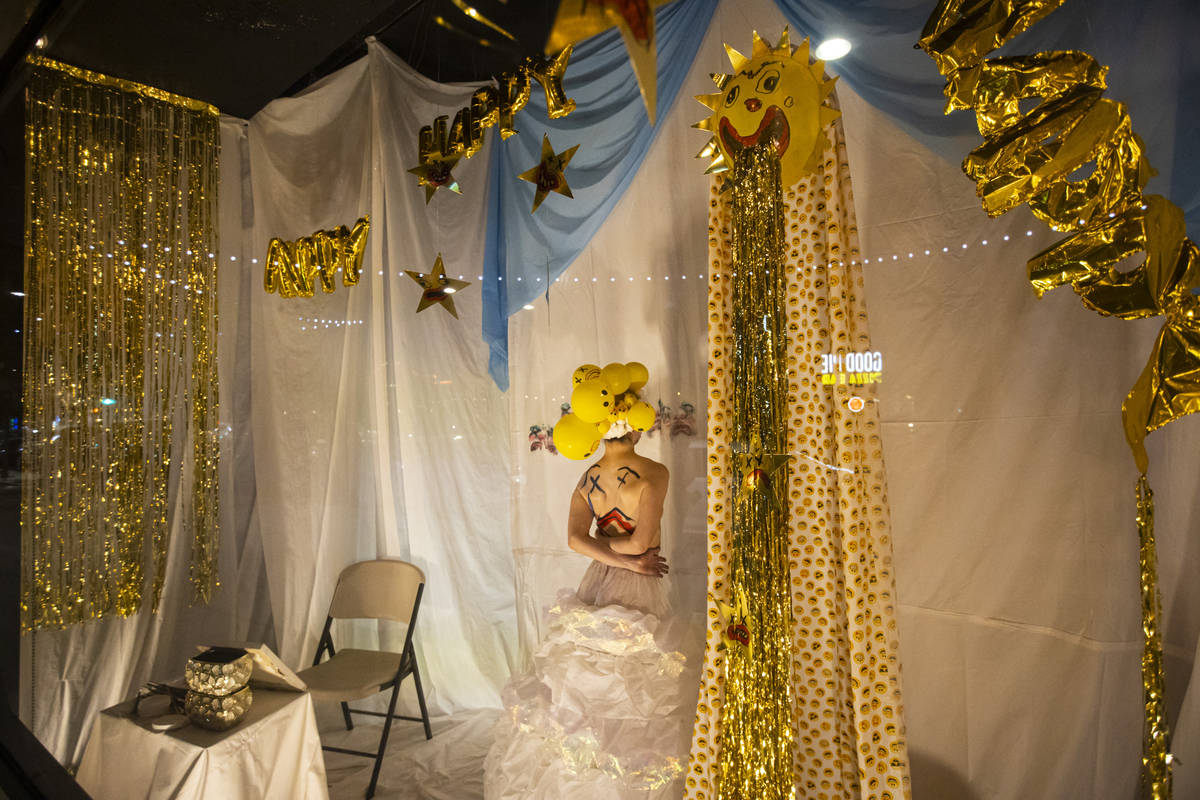 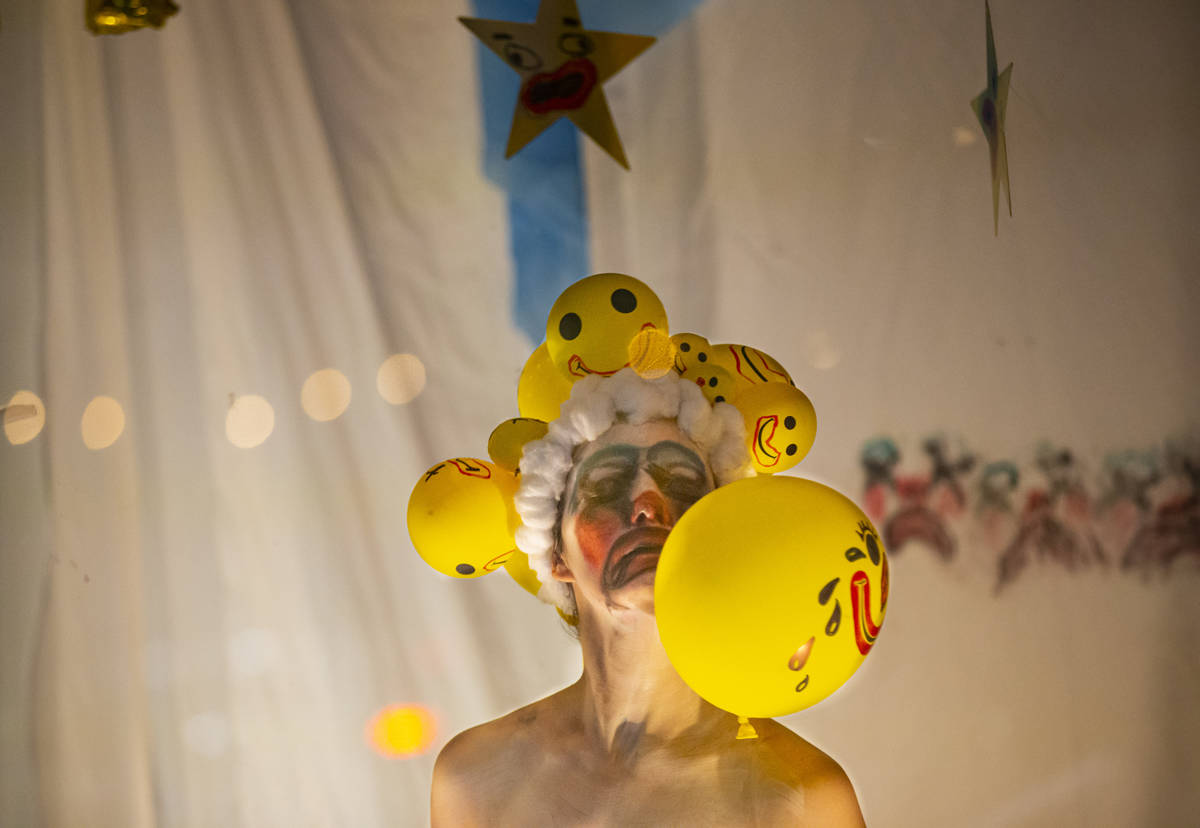 On most days, Heidi Rider performs as a clown in the popular circus show “Absinthe” on the Las Vegas Strip.

On Monday and Tuesday night, she seated herself in front of the broad windows of Majestic Repertory Theatre in the Arts District and performed the routine for unsuspecting passersby.

“The portraits started in October when I got COVID,” Rider says. “I couldn’t stand at my drawing desk or perform or work at “Absinthe.” All I could do was stay in my yard and paint my face.”

For days, Rider applied clown makeup to her face as a means of externalizing the emotions she was experiencing inside. Then she would press her face into a handkerchief.

On Monday night, she took the practice to the public for the first time.

Due to COVID safety restrictions, she devised a physical barrier between herself and the fluctuating audience by sitting behind the theater’s window.

Rider sat poised behind a small mirror. Her hair was concealed beneath a headdress of yellow smiling balloons. Her torso was made up with body paint with two eyes over her chest and a wide frown over her abdomen, above the waistline of a full tulle skirt.

For two hours, Rider systematically painted the image of a sad clown over her face, then walked to the white bedsheet suspended behind her and pressed her face into the fabric, transferring the image into a growing line of portraits, laid out like days on a calendar. By the end of Monday night, she had stacked about 30 faces onto the sheet.

“The last couple years were difficult for me personally. This project was a way to process these emotions,” Rider says. “Repeating that, it was something about trying not to disappear. The faces got more muddy until by the end it looked horrible. Then I cleaned the color off my face and reapplied the white paint and started over. There are so many metaphors in there.”

While she worked, tourists and locals who were walking through the Arts District would pass by the window and look. Some would take pictures, some pointed but continued walking and some walked right up to the window, hoping to catch Rider’s eye.

“It’s fun to see how people play with proximity,” Rider says. “Some people came up and played with me. I rely on body language when interacting, and it’s harder when everyone is wearing a mask.”

While “Absinthe” was still shuttered in May of last year, Rider performed through windows for “Majestic Drive-Thru Theatre: Decontamination.” In the drive-through production, audiences remained in their vehicles while performers moved around them.

“In ‘Drive-Thru,’ people knew what to expect, that they were going to have an experience,” says Rider. “People interact differently when they see that something has already been happening by the time they arrive. And it will continue to happen when they pass by. It could potentially go on forever.”

While Rider painted and wiped and painted and wiped her face over four hours between the two sittings, some passersby approached the window to wave or muse over Rider’s intention or point to the balloon banner above Rider that read “HAPPY” and encourage her to smile.

“One reason I got into clown is it’s a natural space for me to be in, the person who makes everything OK,” says Rider. “There’s a reason there’s a cliche about sad clowns.” 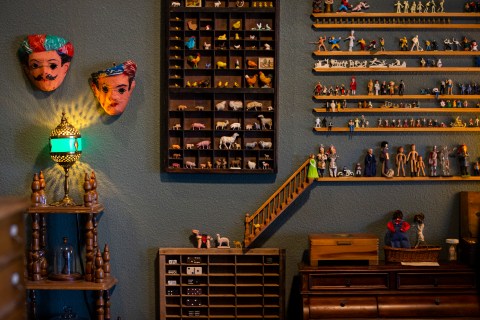