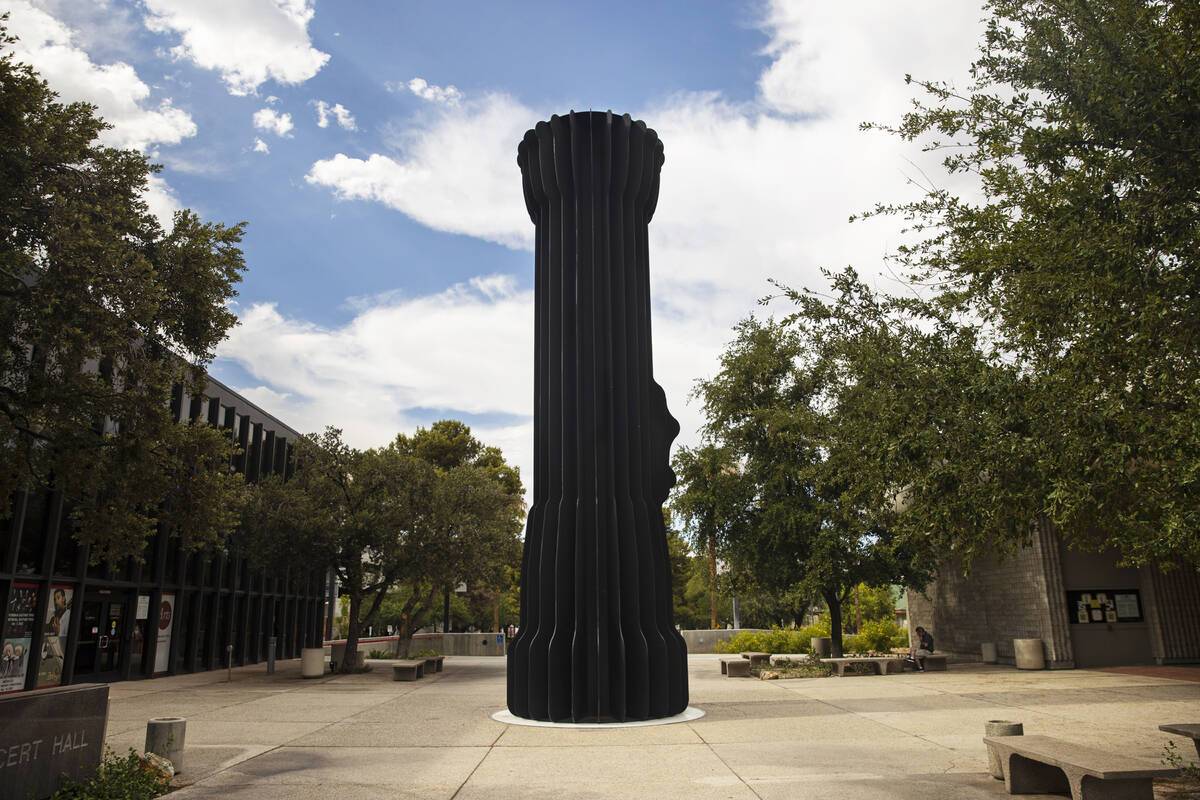 “The Flashlight,” a sculpture by Claes Oldenburg and Coosje Van Bruggen, is pictured at the UNLV campus on Monday, July 18, 2022, in Las Vegas. (Chase Stevens/Las Vegas Review-Journal) @csstevensphoto 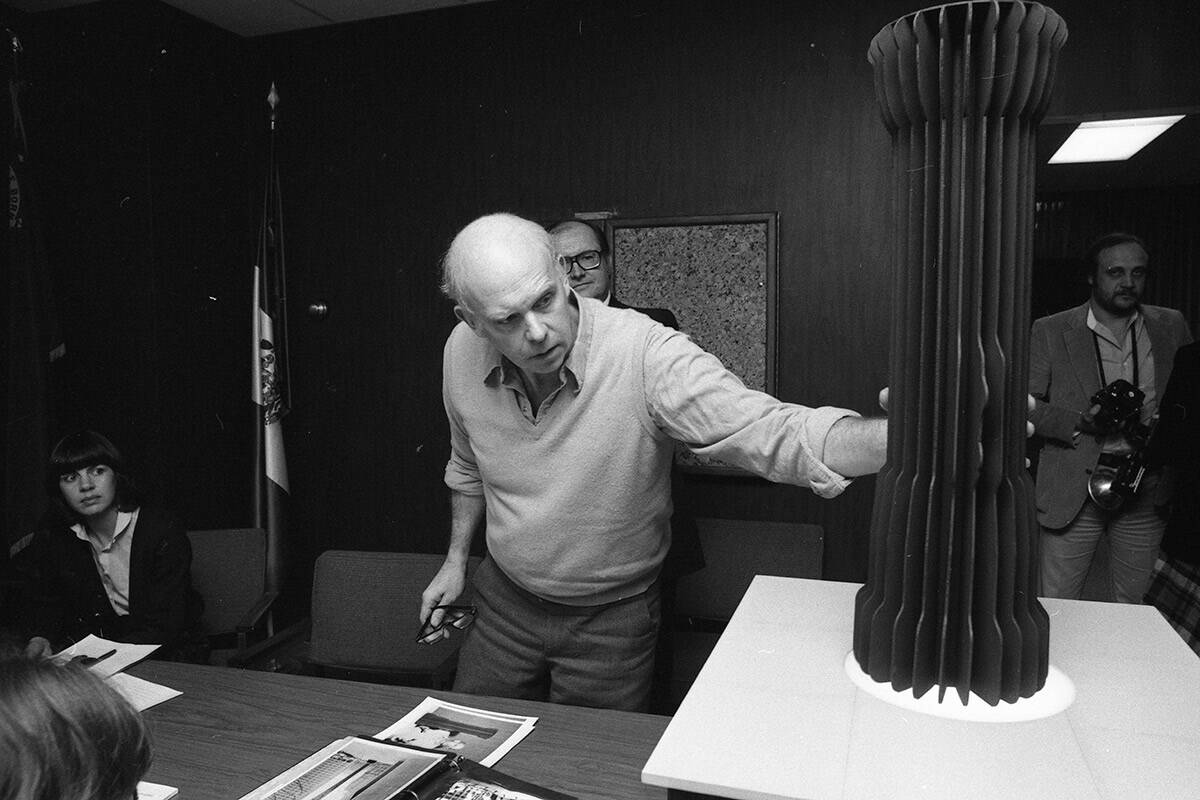 Internationally renowned sculptor Claes Oldenburg unveils his design for a 35ft black steel flashlight to be placed between UNLV's Hamm Hall and Judy Bayley Theater in January 1980. The sculpture cost $70,000, half of which was provided by a grant by The National Endowment For The Arts. (Scott Henry/Las Vegas Review-Journal) 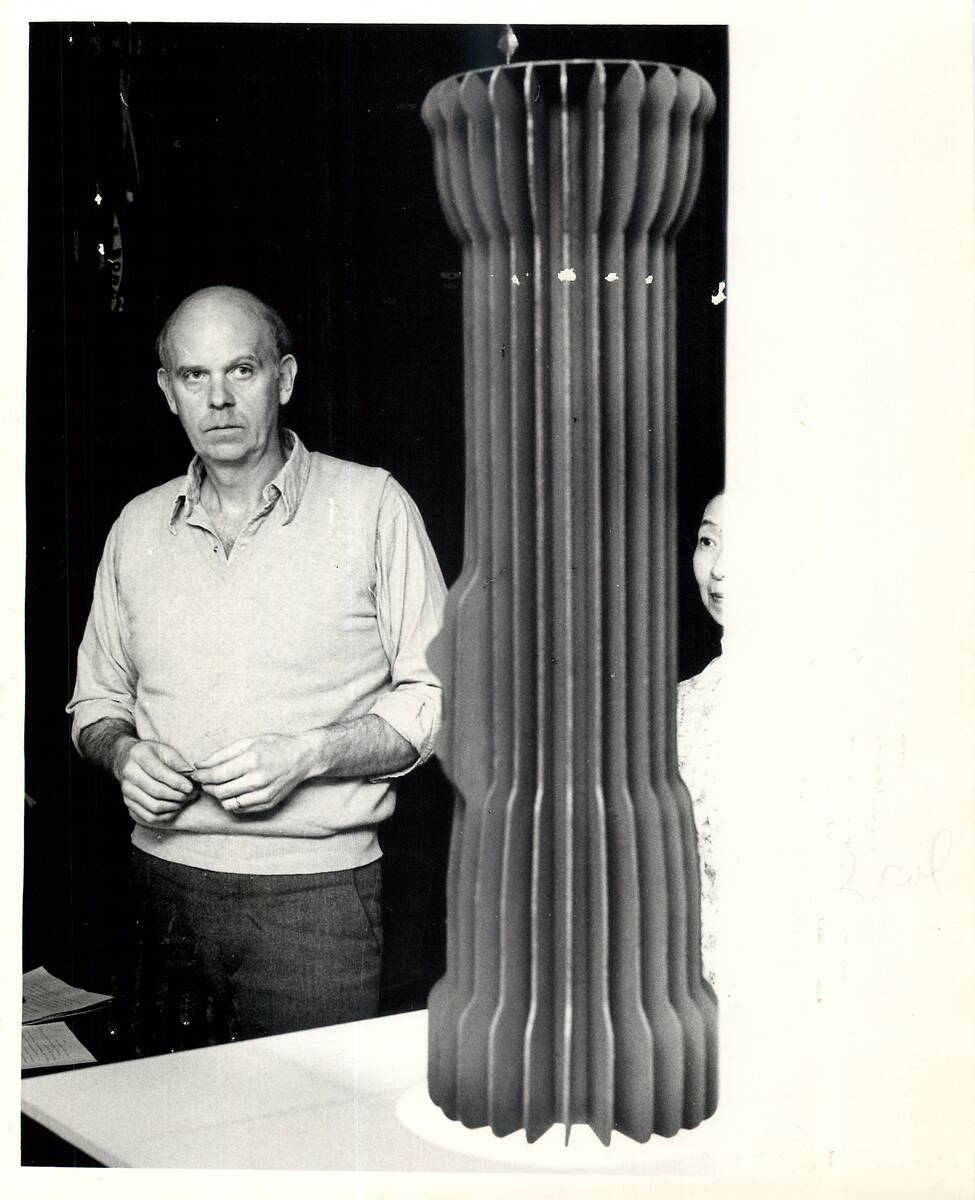 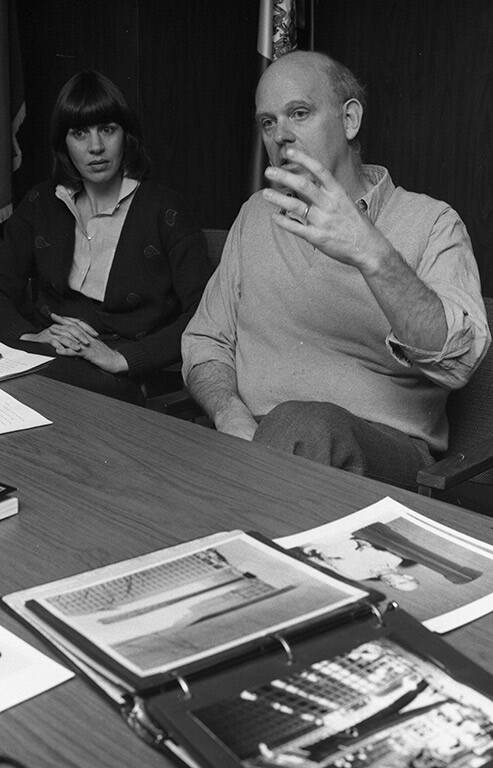 Internationally renowned sculptor Claes Oldenburg unveils his design for a 35ft black steel flashlight to be placed between UNLV's Hamm Hall and Judy Bayley Theater in January 1980. The sculpture cost $70,000, half of which was provided by a grant by The National Endowment For The Arts. (Las Vegas Review-Journal) 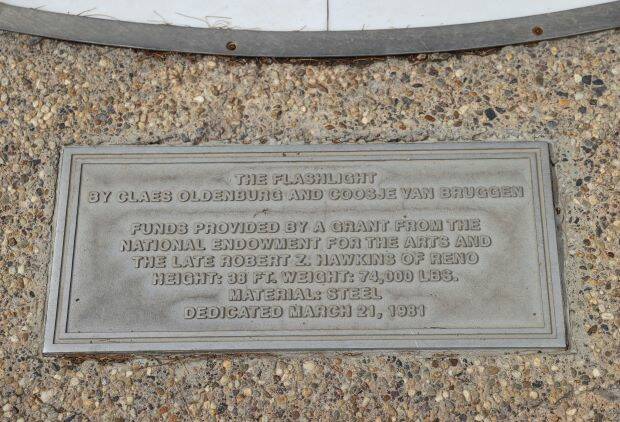 “The Flashlight,” a sculpture by Claes Oldenburg and Coosje Van Bruggen, is pictured at the UNLV campus on Monday, July 18, 2022, in Las Vegas. (Chase Stevens/Las Vegas Review-Journal) @csstevensphoto

Oldenburg, born in Stockholm in 1929, was known for his public sculptures depicting everyday objects on a large scale. He was a pioneer in the Pop Art movement of the 1960s and frequently collaborated with his wife Coosje van Bruggen to create installations found worldwide. The two created over 40 large outdoor sculptures together before her death in 2009.

Early in his career, Oldenburg was a key developer of “soft sculpture” made out of vinyl — another way of transforming ordinary objects — and also helped invent the quintessential 1960s art event, the “Happening.”

Among his most famous large sculptures are “Clothespin,” a 45-foot steel clothespin installed near Philadelphia’s City Hall in 1976, and “Batcolumn,” a 100-foot lattice-work steel baseball bat installed the following year in front of a federal office building in Chicago.

His 38-foot piece “Flashlight,” created with van Bruggen, debuted at UNLV in 1981. It is located in its original home between Artemus Ham Concert Hall and Judy Bayley Theatre.

According to UNLV, the sculpture was commissioned to “amplify the vision” of the performing arts center, according to UNLV campus architect James McDaniels. Initially, Oldenburg declined the commission for the sculpture from a university advisory committee, but after negotiations with another artist fell through, Oldenburg was reinvited by the committee to create a piece, and he accepted.

The 74,000-pound piece was transported from Oldenburg’s Connecticut studio to Las Vegas on an 18-wheeler to be installed.

Oldenburg told the Los Angeles Times in 1988 that the city of Las Vegas appeared as “a small patch of light in a vast desert darkness … A flashlight seemed to be the proper symbol for that beacon of light in the desert.”

Oldenburg and van Bruggen’s 19-foot sculpture “Typewriter Eraser, Scale X,” created in 1999, is located at CityCenter as part of its Fine Art Collection next to the PokerGO Studio. It is the largest of three typewriter eraser sculptures created by Oldenburg and van Bruggen, according to the CityCenter Fine Art Collection, and has been on display since the Aria opened in 2009.

Oldenburg’s family moved in 1936 from Sweden to Chicago, where his father served as Swedish consul general for many years. Oldenburg eventually became a U.S. citizen.

As a young man, he studied at Yale and the Art Institute of Chicago and worked for a time at Chicago’s City News Bureau. He settled in New York by the late 1950s, but at times has also lived in France and California.

Oldenburg is survived by a son, daughter and several grandchildren.