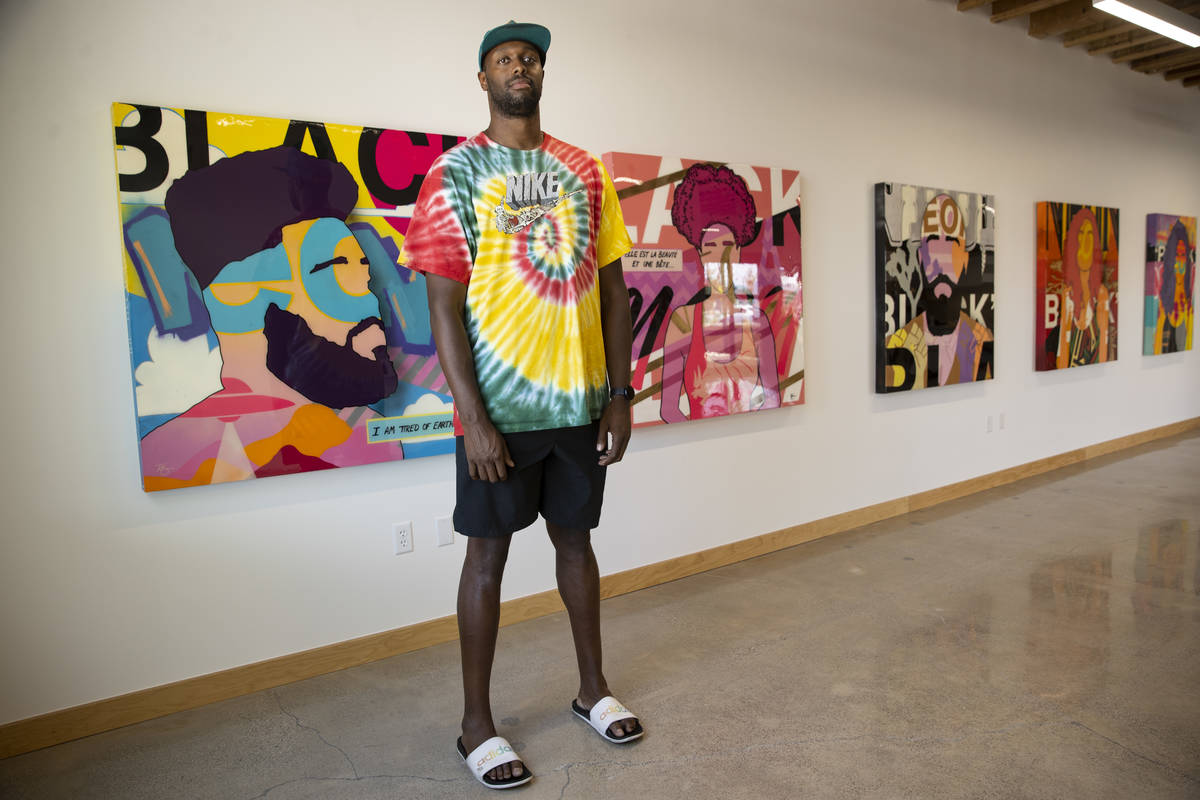 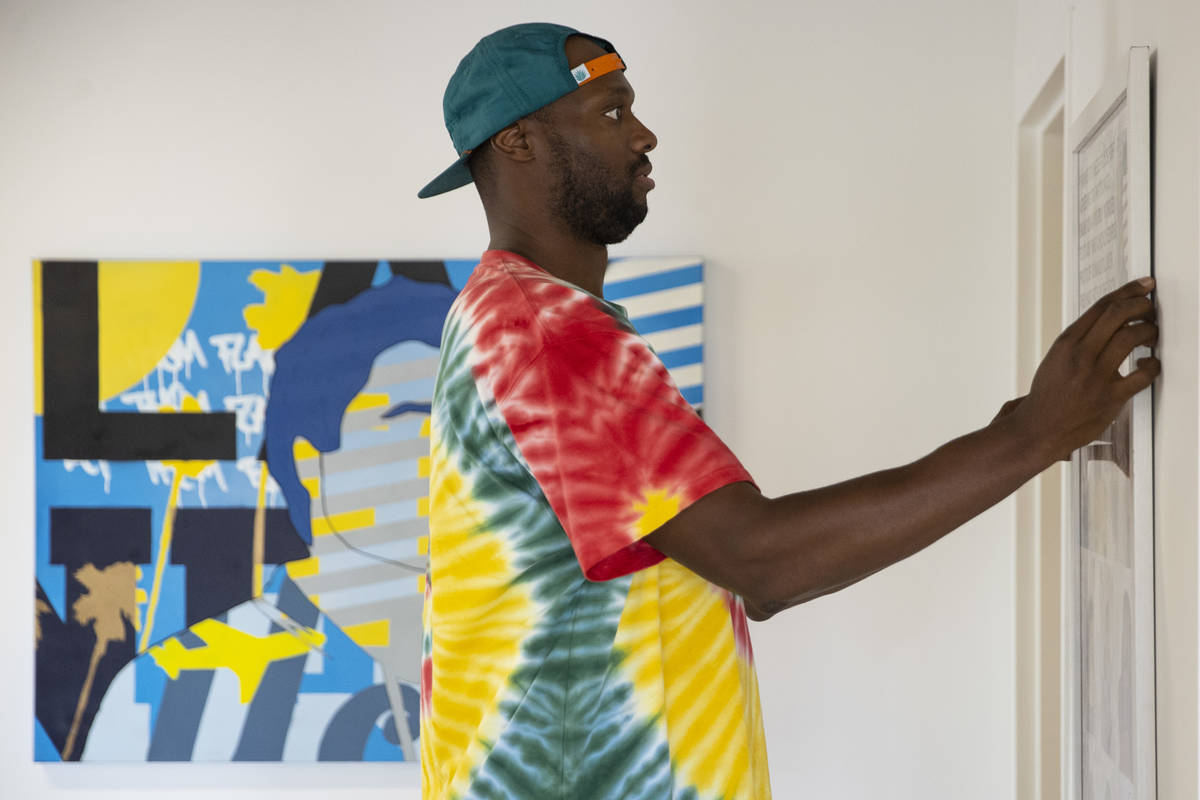 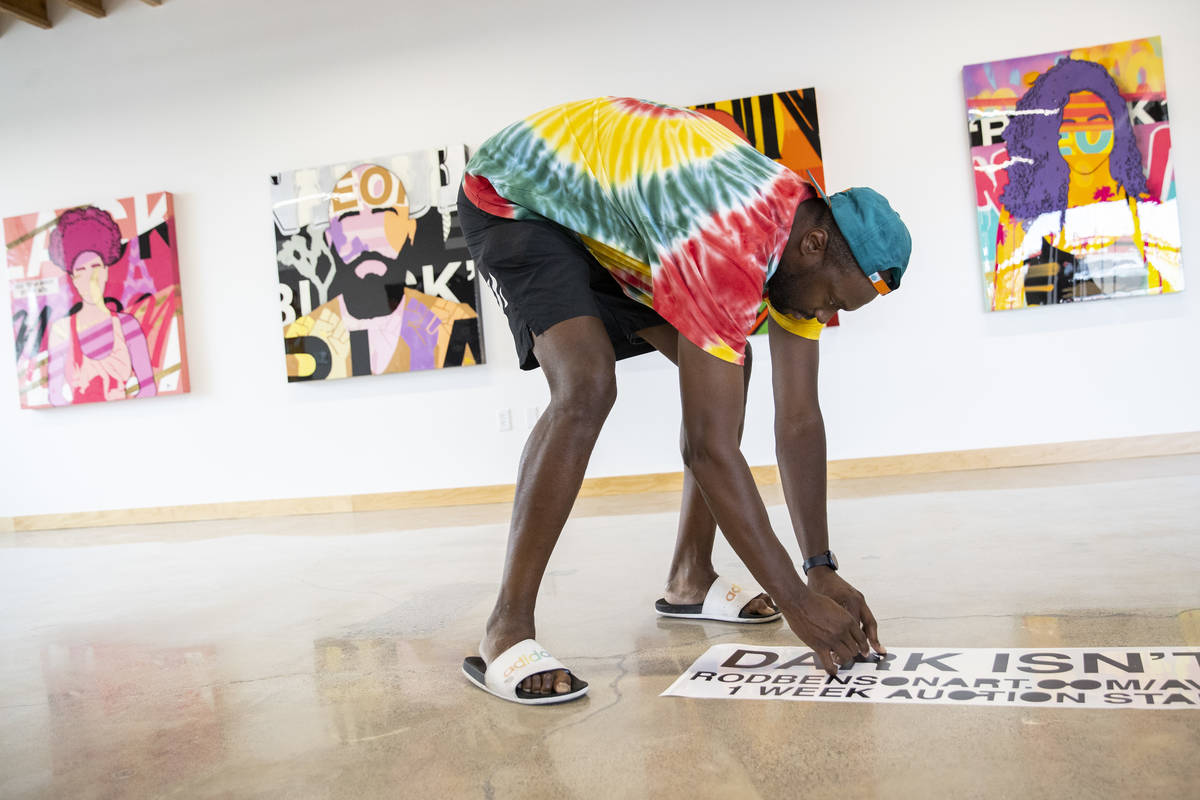 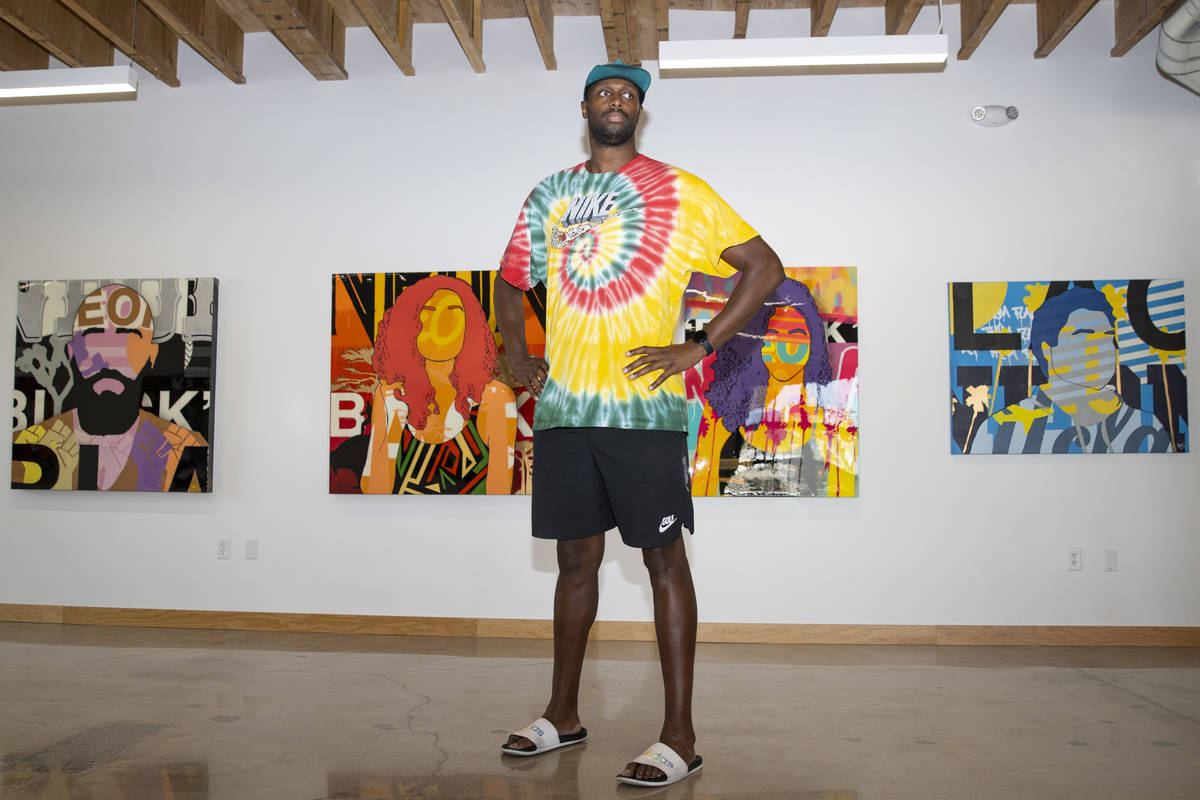 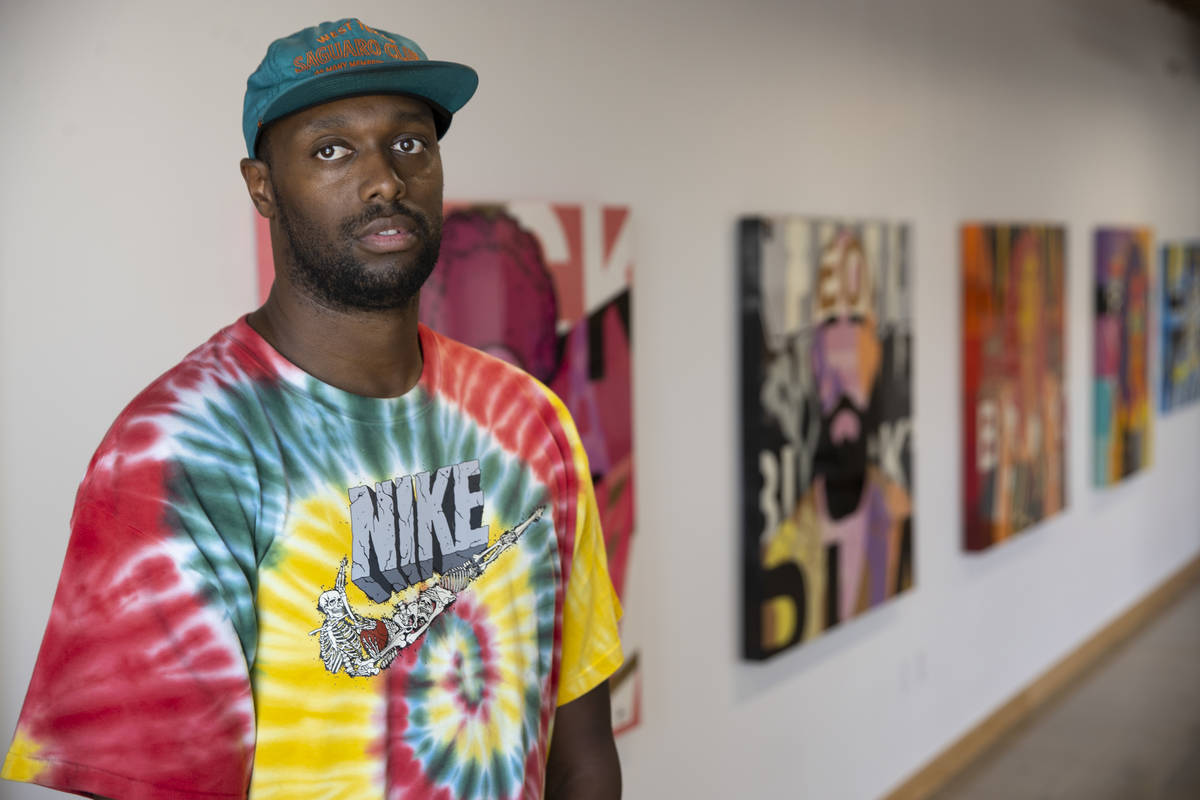 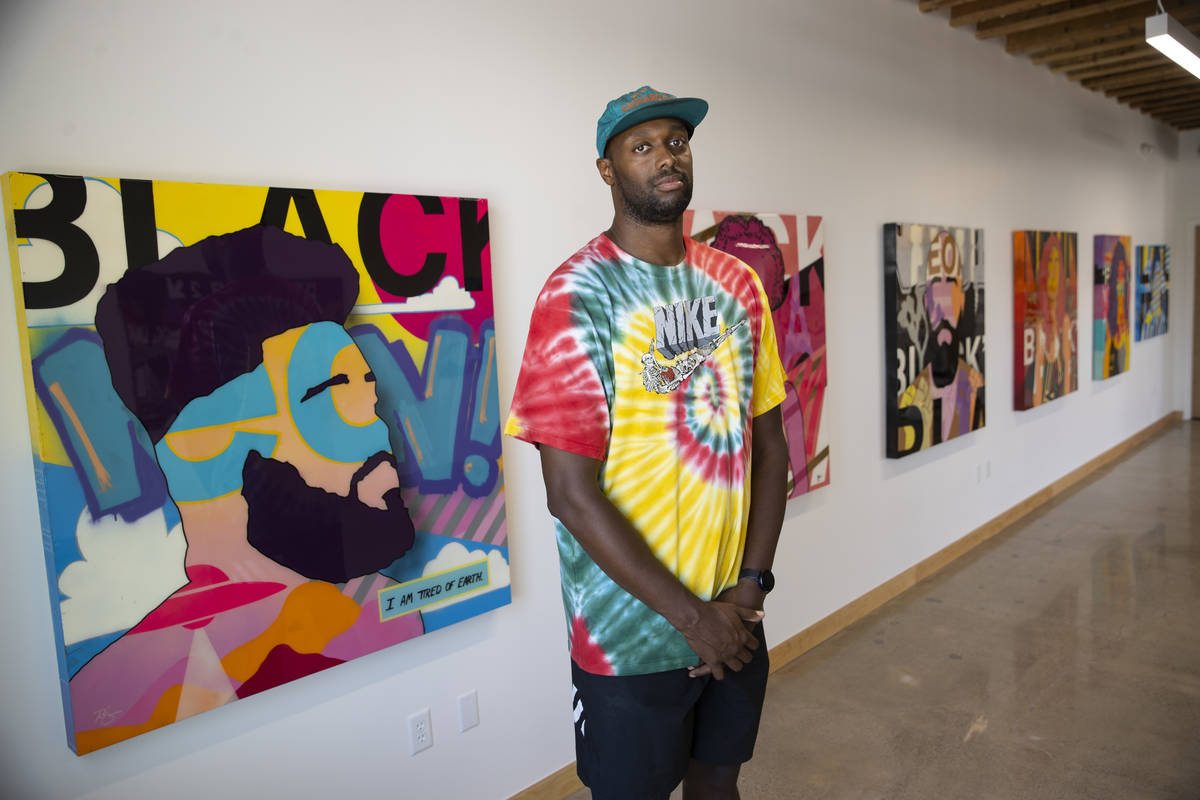 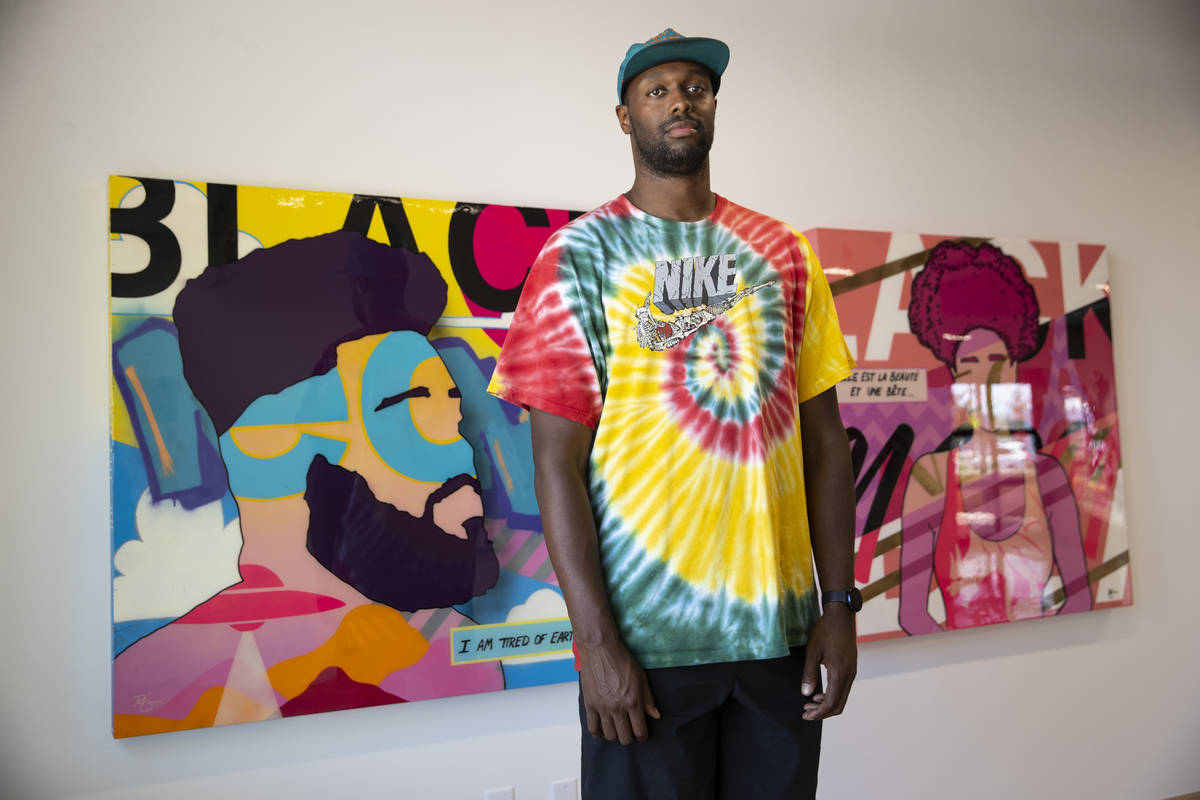 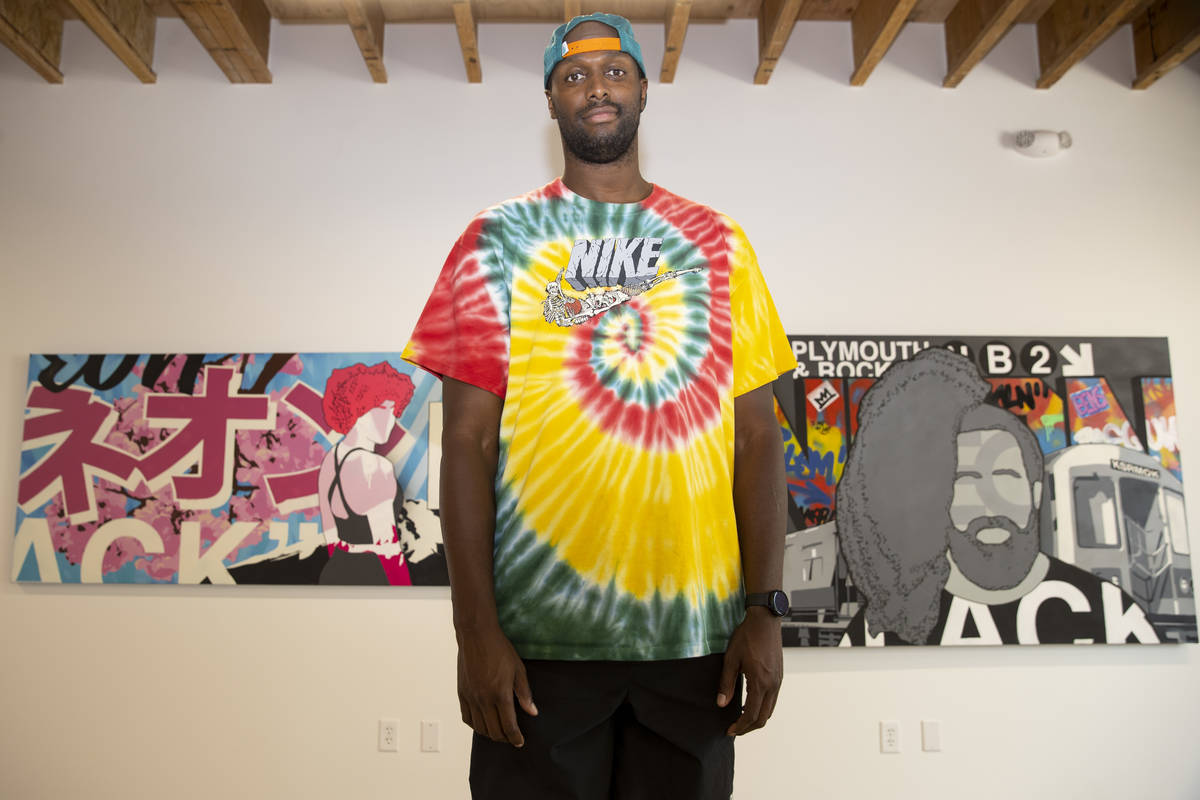 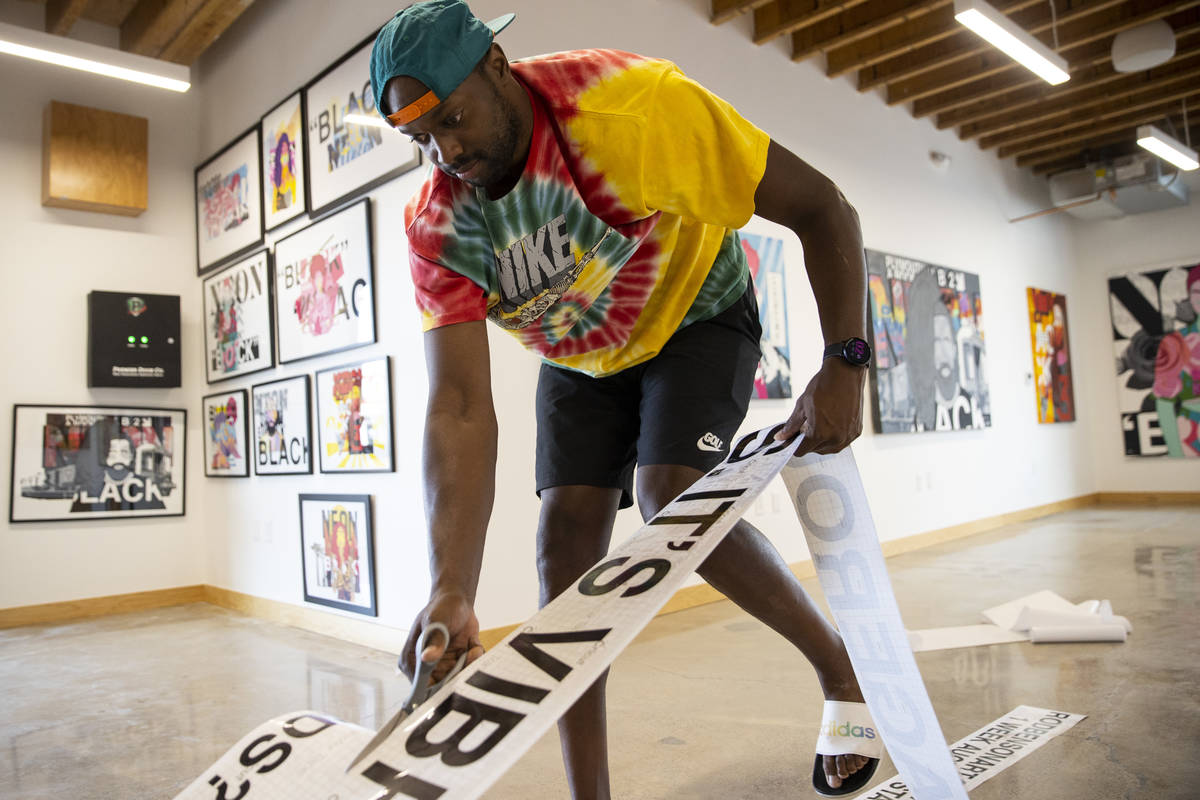 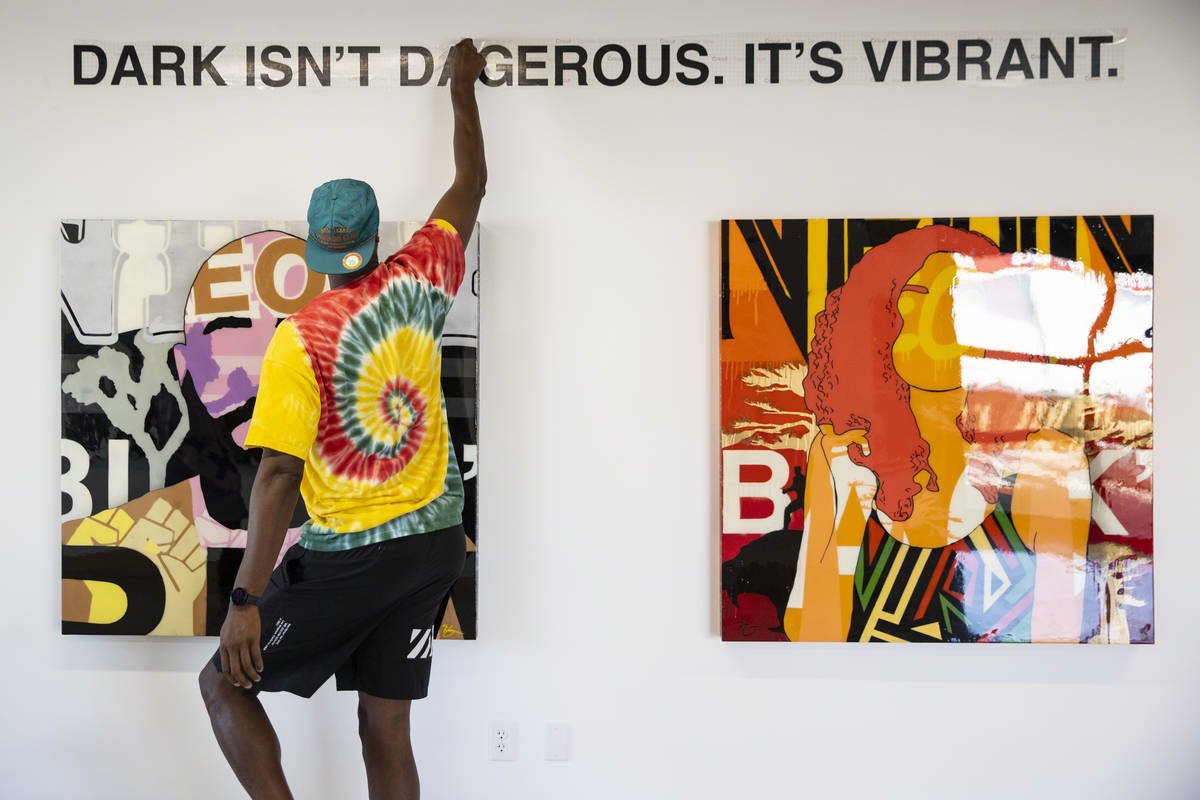 Art, and artists, can be influenced by all sorts of things — even by what Rod Benson refers to as an incident of “brutality” at a nightclub on the Strip.

The experience is part of the lineage of Benson’s most recent exhibition, “Neon Black 2,” which runs through July 17 at The Herbert, 801 S. Main St., Suite 130, in downtown Las Vegas.

The paintings in the exhibition use Black hairstyles as a jumping-off point for celebrating the colorful diversity of Black culture and identity.

“There is a huge cultural thing with Black hair,” Benson says. “For one thing, beauty and barber shops are very communal. I think we spend most of our time in those spaces. So you can actually feel a sense of community.”

Also, he says, “there is a lot of pressure on Black people to groom their hair in a way that fits white culture.”

In the paintings that make up the exhibition, silhouettes of five men and five women, all friends of Benson, appear against colorful backgrounds that suggest various places — New York City, an anime-inflected Japan, even Mars. Each painting is intended to tell a story, sometimes overtly and sometimes subtly, with sly references and the occasional Easter egg.

“Neon Black 2” is a sequel of sorts to “Neon Black,” a series of portraits of iconic Black figures Benson created three years ago. It was his first exhibit and, before creating the pieces in it, he hadn’t thought of himself as a serious artist, only as someone who enjoyed creating art.

“I wasn’t a classically trained artist. I just have favorite artists I like and I tried to emulate, like Banksy and (Roy) Lichtenstein, and do more a pop style,” he says.

Mostly, Benson, now 36, was focusing on basketball back then. He grew up in San Diego, played for the University of California, Berkeley, and spent 12 years playing basketball all over the world. He also began to write for USA Today, Yahoo and other media outlets — he currently is a contributor to SF Gate — and retired from basketball in April 2018.

A few months later, Benson came to Las Vegas to scout players at the NBA Summer League for a South Korean team. On his first day here, Benson says, he met friends at a nightclub on the Strip. There, Benson says, he was, without reason, grabbed by the neck and carried out of the club by police officers.

Benson says he was taken to a back room, made to lie on the floor face-down and handcuffed. Nobody would tell him why he was detained or what charges he might be facing, Benson says.

“They kept me a couple of hours,” he says. “When I was let go it was with no charge. I was not allowed back in the club.”

Benson says the experience left him so shaken that he couldn’t even leave his room. The next day, he cut his trip short and returned to Los Angeles.

At home, he found three canvases that he had ordered while in Las Vegas. He took one and painted an image of Colin Kaepernick, the civil rights activist and former NFL quarterback. Over the next few months, paintings of other iconic Black figures followed.

The pieces became the core of his first exhibition, “Neon Black,” in which Benson aimed to show that Black life and Black identity are “full of vibrancy and color” and that “dark does not have to mean dangerous.”

“The reality is, I had no intention of being an artist. I’m somebody who takes up hobbies,” Benson says. “What changed was being here, going through that incident and feeling like it would be an act of defiance to present people in this way. I kind of felt it was my responsibility now and … use this art to tell not only my story but all of our stories.”

The pieces in “Neon Black 2” also are informed by the incident in Las Vegas, as well as the murder of George Floyd and the Black Lives Matter movement, and are more overtly political than those in “Neon Black.”

For example, a New York-themed piece includes a nonexistent subway station for Plymouth and Rock, referencing, Benson says, Malcolm X’s comment that African Americans “did not land on Plymouth Rock. Plymouth Rock landed on us.”

“Even choosing to have Black hair as a showcase in and of itself is political, given the kind of cultural blowback to that.”

But the goal remains celebrating Black culture and identity. “It’s a celebration of us,” Benson says.

“I wanted to showcase my friends and celebrate what makes them beautiful and unique,” he says, and reinforce that “dark isn’t dangerous. That’s the key takeaway.”