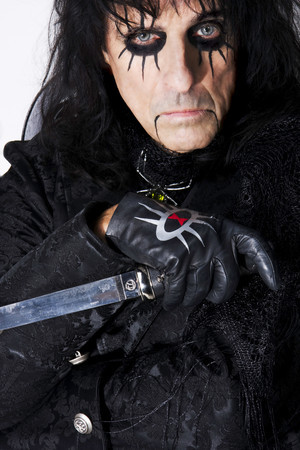 1. HE GOLFED WITH ICEPICK LOUIS

Cooper has golfed in Vegas with whole rosters of celebrities over the decades, but he hit the links with real bruisers back in old Vegas.

“You didn’t know who they were. But after the rounds, you’d get introduced to, like, Icepick Louis. And you’d go, ‘I don’t really want to know how you got that name right?’ And they would go (in a New Jersey accent), ‘No, it would be better if you did not know how I got that name.’ They were all, like, Damon Runyon characters.”

2. DISCO BEAT HIM TO THE HALL

He’s still not in the Rock and Roll Hall of Fame, even though he pretty much invented goth and goth stage shows, and even though Kiss and Chic (disco’s “Le Freak” band) were just nominated for the Hall.

“I don’t even know who Chic is. Do they get in before somebody that sold 80 million copies, and 25 gold albums, and has been touring for 40 years, and maybe influenced more bands than anybody?

“Kiss has done a lot in the business, but obviously, when they came out, they said, ‘If one Alice Cooper works, then four ought to work.’

“That tells you right there who came first. We were before (David) Bowie. We were before anybody. We had 14 Top 40 hits. There was no goth movement before Alice. We were the first ones to put safety pins into clothes.”

3. COPS HAVE PHOTOS OF HIM SPEEDING

He gets speeding tickets driving an Aston Martin in his home state of Arizona, America’s speed-trap capital, where cameras and speed detectors act as Big Brother sentinels at red lights. So cops there have a trophy: a big photo of Glen Campbell driving too fast, with Cooper in the passenger seat, en route to golfing.

“I saw the flash, and I said, ‘Oh, that’s gonna make a great picture.’ It’s literally hanging in the Scottsdale police department, all hung up like a poster. I don’t think we actually had to pay for that ticket, because they used it so well to decorate their place.”

Back in the day, Cooper wore Maybelline’s Whiplash, sold through his fan club. But he’s gone upscale.

After all these years, Cooper’s tour is receiving among the best concert reviews of his life. Truly, raves. It’s a low-tech, high-production affair with 28 songs, from “School’s Out” to “I’m Eighteen,” “Welcome To My Nightmare,” “Only Women Bleed” and “No More Mr. Nice Guy.” And every night, four personality characters of Alice’s get killed onstage.

6. HE ALMOST HANGED HIMSELF

Cooper nearly died from a stage prop in London when he was around 27.

“You’d done it so many times, you just expected it to work every night. And the piano wire that keeps you from hitting the noose, snapped. It caught my neck.

“In that one second of clarity, I flipped my head back, and it went up over my jaw. I did go right through the floor and pretty much knocked myself out, but luckily it didn’t catch my neck.

“It was before we knew how to do it safely. I said ‘Let’s just do it.’ And the guillotine missed me by 6 inches, and that’s a 40-pound blade!

“Later on, somebody came and said, ‘You know, you can do this a lot safer.’ And we were going, ‘What do you mean?’ Duh.”

Then again, if Alice Cooper had ever died onstage:

“I would have been in the Hall of Fame then, for sure.”