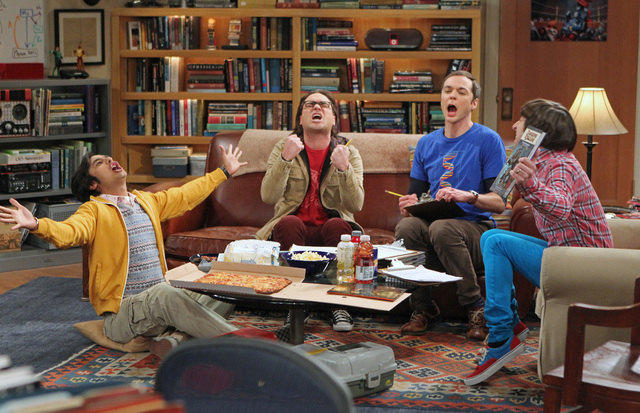 This publicity image released by CBS shows, from left, Kunal Nayyar, Johnny Galecki, Jim Parsons and Simon Helberg in a scene from "The Big Bang Theory." The studio that produces The Big Bang Theory said it has reached contract deals with the sitcoms cast and the show will begin production Wednesday, Aug. 6, 2014, for the new season. (AP/CBS, Monty Brinton)

LOS ANGELES — The studio that produces “The Big Bang Theory” said it has reached contract deals with the sitcom’s cast.

With negotiations concluded, the comedy will begin production Wednesday for the 2014-15 season, Warner Bros. Television said in a statement Tuesday.

Work on the eighth season reportedly had been delayed as the cast of TV’s top-rated sitcom held out for raises. Agreements have been reached with stars Jim Parsons, Johnny Galecki and Kaley Cuoco for lucrative three-year contracts that trade reports put at about $1 million per episode for each actor.

Deals are in place with the entire cast, which includes Simon Helberg and Kunal Nayyar, the studio said.

The CBS series about geeky scientist pals and the women who love them returns Sept. 22.