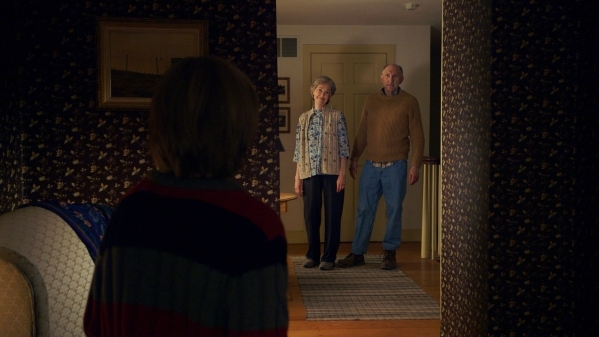 (L to R) Tyler (ED OXENBOULD) is terrified by Nana (DEANNA DUNAGAN) and Pop Pop (PETER MCROBBIE) in Universal Pictures‘ "The Visit". Writer/Director/ Producer M. Night Shyamalan returns to his roots with the terrifying story of a brother and sister who are sent to their grandparents‘ remote Pennsylvania farm for a weeklong trip. Once the children discover that the elderly couple is involved in something deeply disturbing, they see their chances o 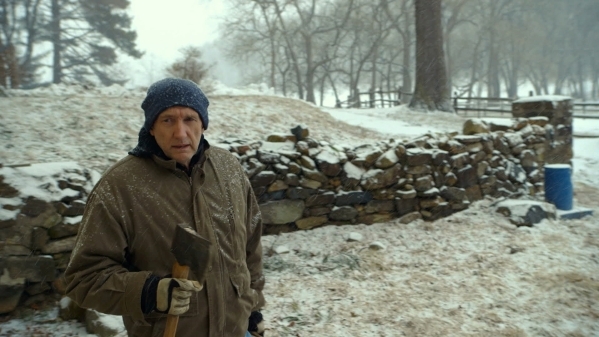 PETER MCROBBIE stars as Pop Pop in Universal Pictures‘ "The Visit". Writer/director/ producer M. Night Shyamalan returns to his roots with the terrifying story of a brother and sister who are sent to their grandparents‘ remote Pennsylvania farm for a weeklong trip. Once the children discover that the elderly couple is involved in something deeply disturbing, they see their chances of getting back home are growing smaller every day. Photo Credit 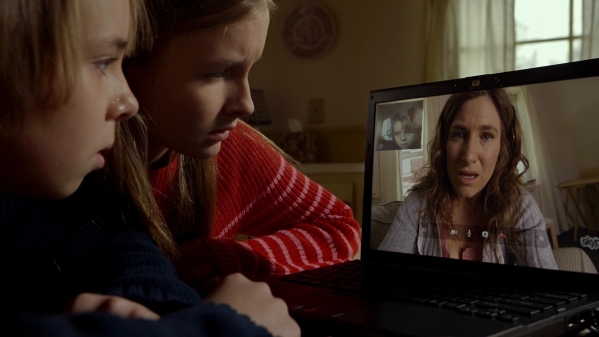 (L to R) Tyler (ED OXENBOULD) and sister Becca (OLIVIA DEJONGE) try to tell their Mom (KATHRYN HAHN) something is horribly wrong in Universal Pictures‘ "The Visit". Writer/Director/Producer M. Night Shyamalan returns to his roots with the terrifying story of a brother and sister who are sent to their grandparents‘ remote Pennsylvania farm for a weeklong trip. Once the children discover that the elderly couple is involved in something deeply distu

To the surprise of almost no one, M. Night Shyamalan has made 80, maybe 85 percent of an entertaining movie.

The rest of “The Visit,” though? Hoo boy!

At this point, the writer-director of “The Sixth Sense” and “Signs” has about as much chance of sticking the landing as a drunken gymnast with a banana peel on one foot and the other caught in a bear trap.

Fifteen-year-old Becca (Olivia DeJonge) and 13-year-old Tyler (Ed Oxenbould, “Alexander and the Terrible, Horrible, No Good, Very Bad Day”) have never met their grandparents, thanks to an ugly incident their mother (Kathryn Hahn) refuses to talk about. Mom left home for good before they were born, and she hasn’t spoken to her parents since. They’ve recently reached out, though, wanting to meet their grandchildren, and Becca and Tyler happily accept their invitation to spend a week on the rural Pennsylvania farm where Mom grew up. But the kids are mostly just going along with the trip so Mom can finally get away on a cruise with her boyfriend and have some fun for the first time since Dad split five years ago.

Besides, Tyler worries, what if they’re weird? “They could be scrapbookers. They could think boy bands are cute!”

Pop Pop only has a couple of rules: There’s mold in the basement, so don’t go in there. Also, bedtime’s 9:30, and it’s probably best if they don’t come out of their rooms after that.

From there, “The Visit” is a fairly simple tale of things that go bump — and, apparently, soil themselves — in the night.

Craving some more homemade cookies, Becca heads downstairs after curfew to find Nana wandering around, projectile vomiting all over the floor. Soon after, Tyler sneaks into Pop Pop’s shed and discovers a pile of very, very used diapers. But while both incidents initially are cause for concern, they’re easily explained away.

As their curious behavior starts to add up, though, there’s a very real question of whether Nana and Pop Pop are simply being ravaged by the effects of time, or if something sinister is afoot. And, this being a Shyamalan movie, in an attempt to figure out the looming twist, you’re constantly parsing the clues: Why won’t Mom and Nana talk about their falling-out? What’s in those cookies? How could Pop Pop possibly go through that many diapers?

“The Visit” is the latest in the seemingly unkillable found-footage genre, one of the worst things to happen to the moviegoing experience since the invention of chatty teens. Thankfully, though, Becca is an aspiring filmmaker who’s making a documentary about their family, so she at least chooses some interesting shots and camera angles. Her equipment is reasonably professional. She even brings along tripods to eliminate most of the need for Dramamine. But, as in pretty much every found-footage tale since “The Blair Witch Project,” Becca keeps filming, way after even the most dedicated documentarian would have given up, when things get terrifying.

Or, at least, as terrifying as they get. Sure, “The Visit” offers a couple of cheap jolts. And there’s a general sense of creepiness and dread throughout. There’s also more elder nudity than you’d expect — and certainly more than you’d ever want. But for the most part, “The Visit” is more silly than scary.

Shyamalan has included way too many scenes of Tyler performing for the camera, giving “The Visit” more forced comic relief than fright. Becca, meanwhile, employs a vocabulary and a cadence that no teenager has used outside the confines of “Dawson’s Creek.” Despite Shyamalan’s efforts to ground them by showing the personal aftermath of their father’s betrayal — Tyler has developed some pretty severe OCD issues; Becca won’t look at herself in a mirror — neither character feels real. Nana and Pop Pop don’t feel real, either, but at least Dunagan and McRobbie are a hoot.

When The Twist comes, every bit as inevitably as during a Chubby Checker concert, the biggest surprise is that you didn’t manage to see it coming.

“The Visit” isn’t a remarkable or even terribly original movie. But after a decade that’s seen Shyamalan offer up “The Village,” “Lady in the Water” and “The Happening,” it should surpass your severely lowered expectations.

The taste “The Visit” leaves in your mouth may not be nearly as delicious as Nana’s cookies, but it’s at least more palatable than Pop Pop’s diapers.